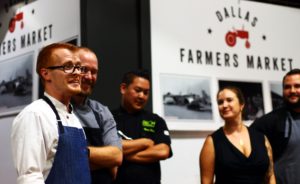 Stephanie: The August Farm Shed Dinner at Dallas Farmers Market was unlike any of the previous dinners put on by the incredible minds behind Tres Dallas. Typically Farm Shed dinners are prepared by Chef Mike Kelly and Chef Chris Waltman while #GirlBoss Tia runs front of house but this month they enlisted the brilliant talents of a private chef team from Houston, TX. 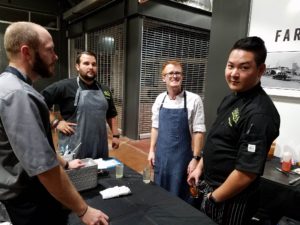 Chef’s Alejandro and Masaru are behind PACHA Private Chefs And Creative Catering. Known in Houston for their unique Colombian and Asian flavors, as well as, for their incredible Ceviche and Taco Bar Pop Up events that often feature DJ performances and almost always sell out.

We were all very lucky to be able to experience their talents before they blow up making it harder to try anything they create. 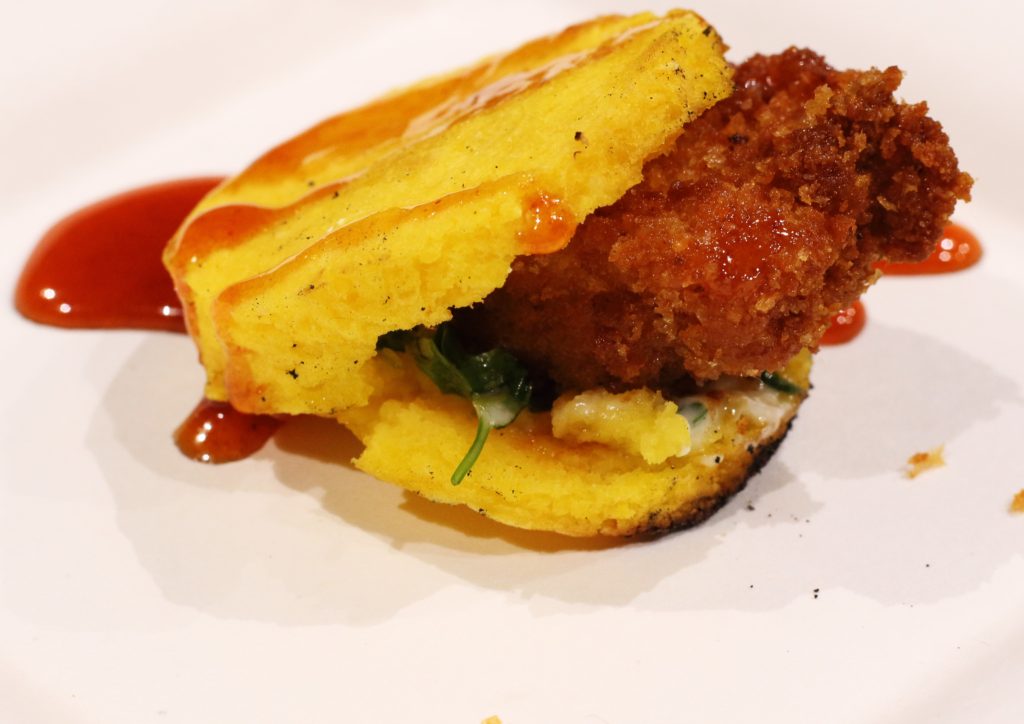 Dawn: First Course – Mini Arepa Waffle, Bacon Fried Chicken, Cilantro Butter, Bourbon Honey
The amuse was Texas-sized. Bigger than a bite, but I shoved all of that goodness right in! Tender chicken breaded with a blend of dehydrated waffles and maple bacon. It was fried until crispy and nestled into the arepa pillow with cilantro butter. So perfectly comforting. 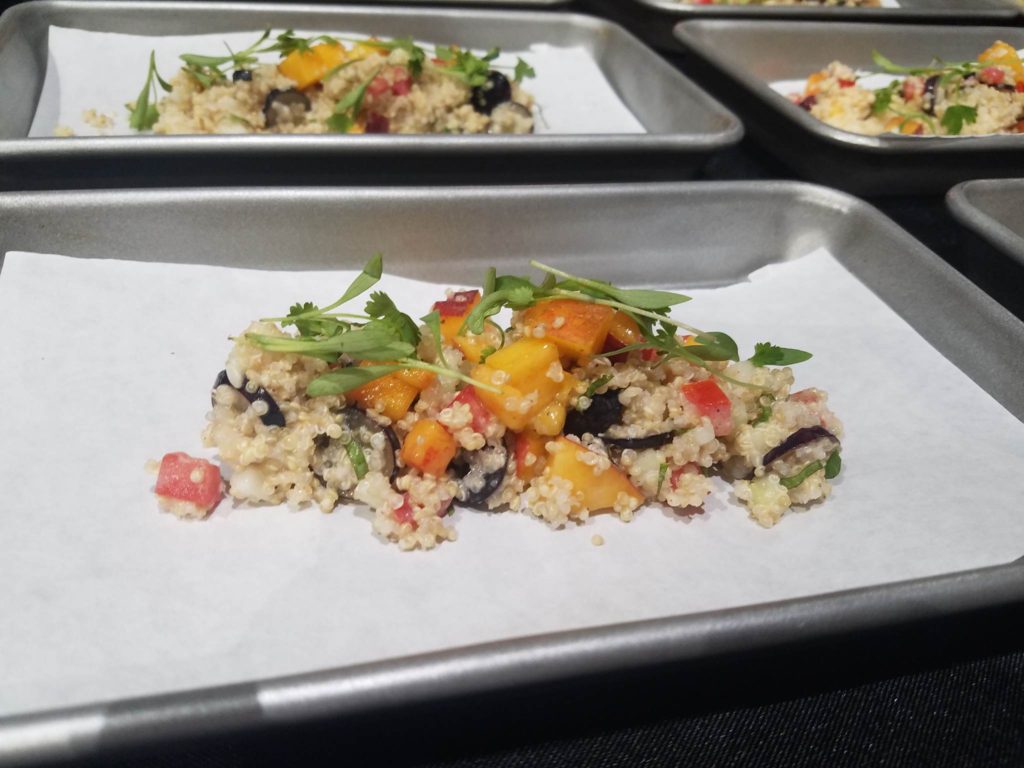 Stephanie: Second Course – Quinoa Salad, Seasonal Fruit, Cucumbers, Mint, Poppy Seed & Lychee Dressing
This salad was so simple, but it was still one of the most impressive things I’ve ever had. I would never have thought to mix Quinoa, cucumber, peaches and lychee!? It was wonderful. 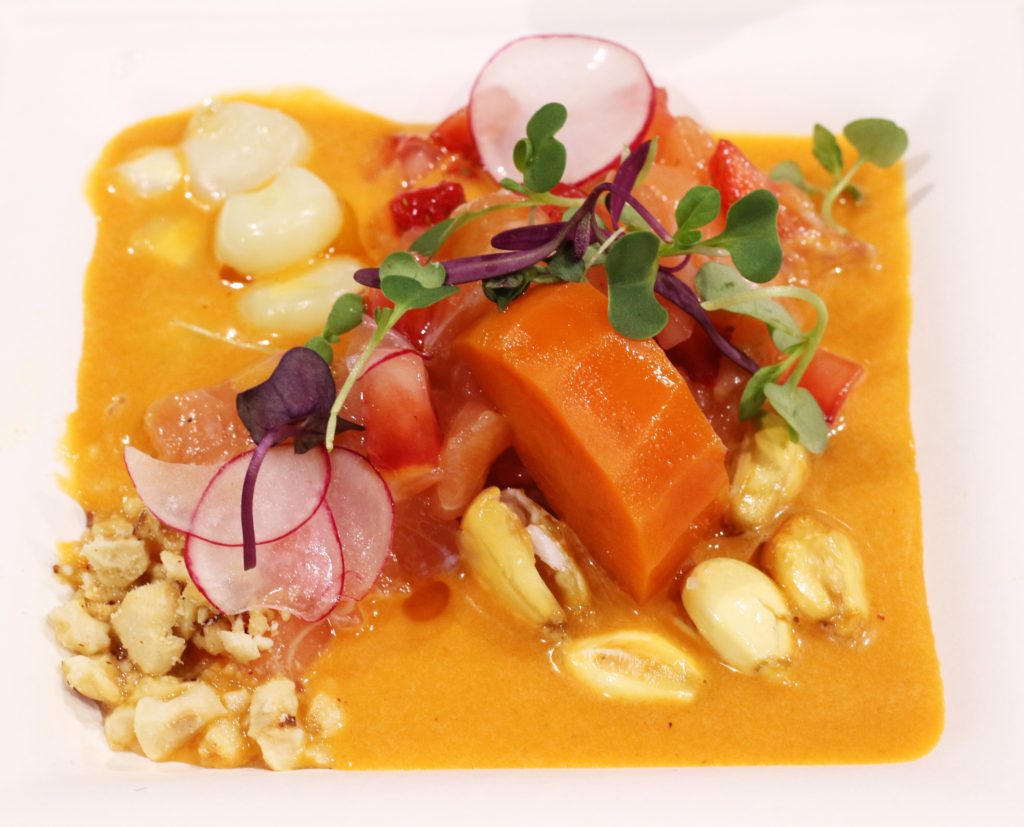 Dawn: Third Course: Ceviche Nikkei, Salmon, Panca-Yuzu Leche de Tigre, Strawberries, Radish, Cancha, Sweet Potato, Chorizo Oil
Oh. My. Goodness. This dish was exquisite. There are seriously no words to describe how good it was. The salmon was swimming in the fresh and spicy Leche de Tigre. The strawberries and sweet potato brought in sweetness and depth that was sublime. The cancha and choclo added a chewy, crunch. Leche de Tigre should be bottled and sold. It was the thread that wove this rich tapestry together. If I had been alone, I would have licked the dish. 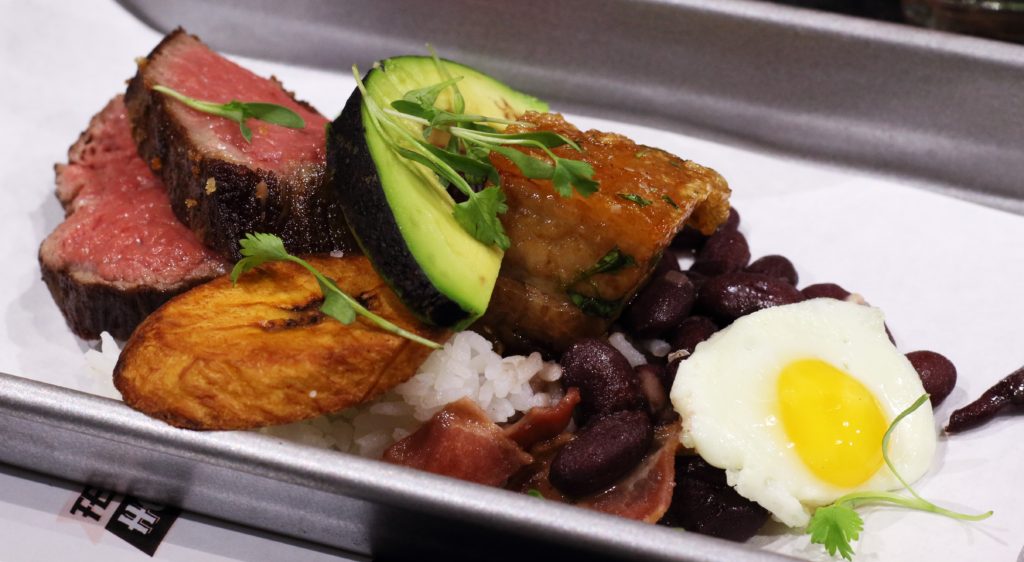 Stephanie: Fourth Course Tenderloin, Chicharron, Red Beans, Jasmine Rice, Torched Avocado
This course was another fantastic example of how good Chef Alejandro and Chef Masaru are at mixing unexpected components. The red beans and jasmine rice were just amazing, so creative and it worked so well with the beef. Beautiful dish. 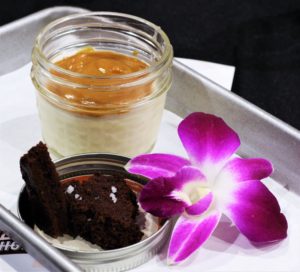 Dawn: Guanabana Panna Cotta, Lucuma Manjar Blanco, Chocolate Sponge
This dessert was ecstasy. Do not laugh or scoff because you have no clue how good this was. The guanabana cooked cream flavored was creamy and sinful. On top of the pannacotta was the manjar blanco infused with lucuma. Try to imagine a fruity cajeta. All served with just enough chocolate sponge cake. I believe it was dark chocolate with few sprinkles of salt. The sponge cake was a brilliant way to offset the sweetness of the rest of the dessert. 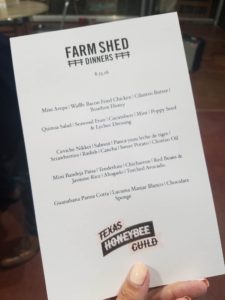 Bravo to Tres Chef and Pacha Chefs! The food, the people, and the venue were stellar. I never thought I would ever say I was jealous of Houston, but I am jealous that they have Pacha!

Below is a glossary in case you weren’t sure of ingredients:

Arepa – a flat, round, unleavened patty of soaked, ground kernels of maize, maize meal or maize flour that can be grilled, baked, fried, boiled or steamed and stuffed with good stuff.

Cancha – a sort of popcorn made from a particular variety of corn called maiz chulpe. This popcorn is not like regular popcorn. Think corn nuts but much lighter and softer.

Choclo – a large-kernel variety of field corn from the Andes. It comes on a cob like regular corn, but the kernels are substantial. A corn kernel on steroids. They are sweet and chewy.

Guanabana – also called soursop, is a fruit found on an evergreen tree found in South America. The guanabana starts as a flavor combination of pineapple and strawberry then evolves into a milder creamy coconut/banana.

Leche de Tigre – translated tiger’s milk. A Peruvian marinade that is citrus-based and used in ceviche containing juice, onion, and chiles. Oh, and it is an aphrodisiac!

Lucuma – or eggfruit, has a flesh like a hard-boiled egg yolk. It tastes like a sweet potato infused with maple syrup.

Lychee – a fleshy fruit covered by a pink, inedible, rough rind. The interior is a layer of sweet, translucent meat.

Panca – a South American chili that is deep red in color and three to five inches long. It has a sweet, spicy and smoky flavor. The peppers are often made into a paste or dried and used in fish dishes.

Yuzu – a fruit similar to an orange, but not often eaten on its own. Its flavor is tart. Think about the offspring of a grapefruit and mandarin orange. The juice of the fruit often is used as a seasoning. 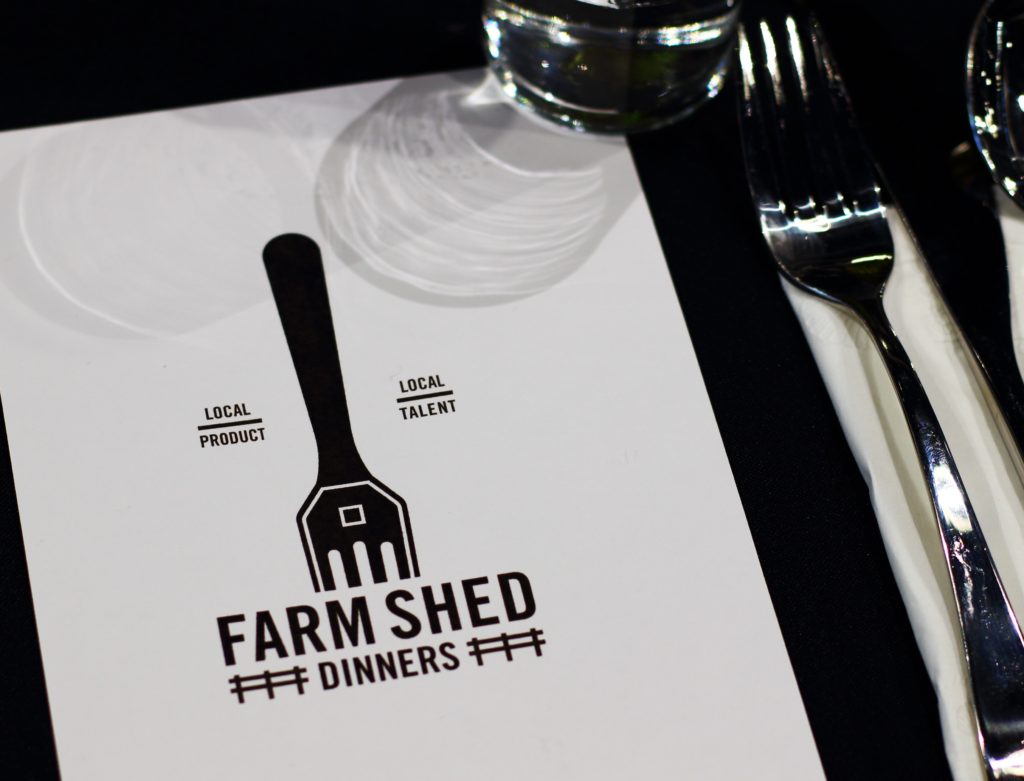