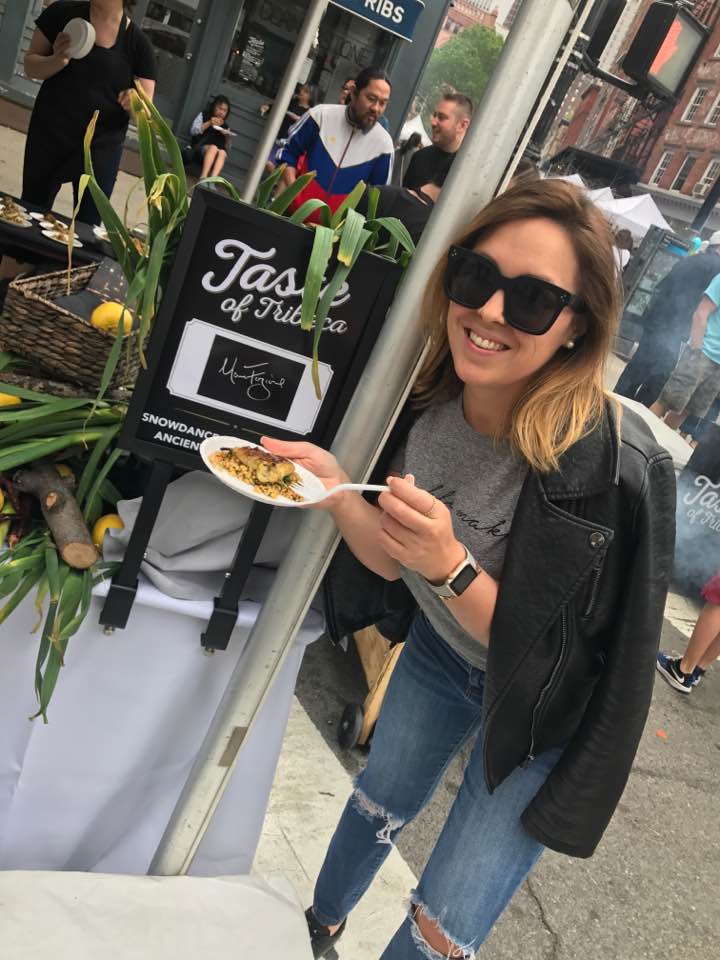 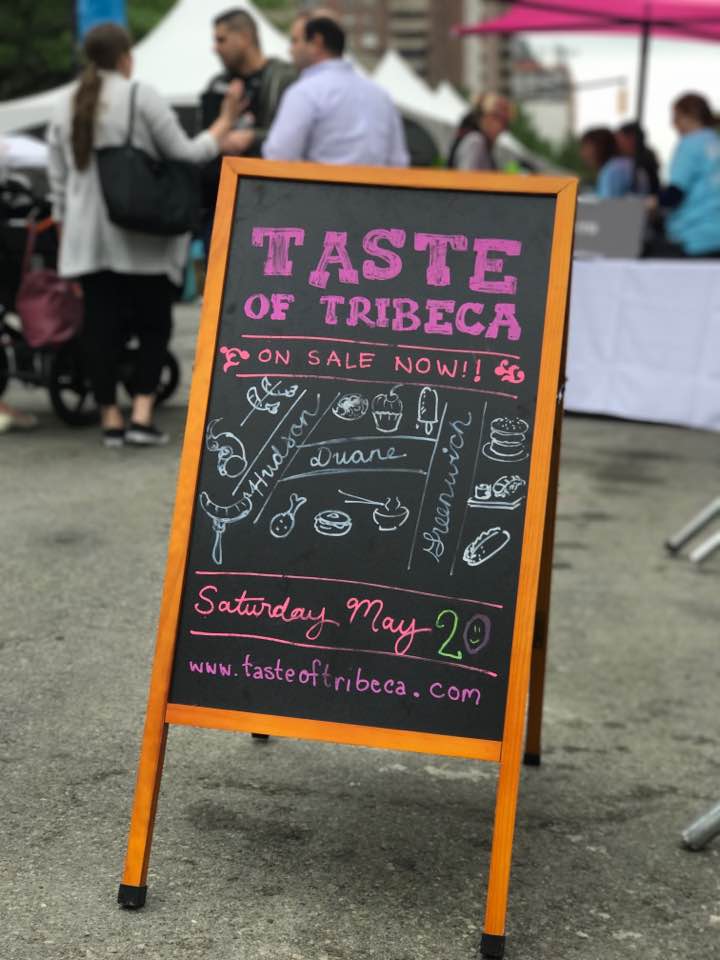 It was Saturday afternoon and the skies were grey but the crowd was bright and cheery because Taste of Tribeca was in full effect. With over 60 participating vendors and endless plates of delicious goodness, the streets between Greenwich Street and Hudson Street were lined with what seemed like unlimited small plates of some of the best chef’s creations in New York City. 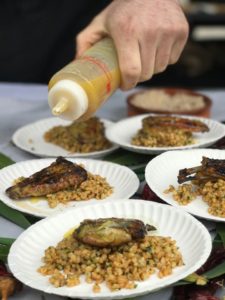 Everything from scrumptious Steak Tartare at American Cut, to an entire ice cream cone filled with a cold creamy concoction at The Odeon, to an entire Pulled Pork Sandwich at Walker’s, there was something for everyone and then some. Some of my favorites included Grilled Chicken Wing Over Ancient Grains and Ramps by Marc Forgione, the Mini Bagels Topped With Lox by Zucker’s, and of course a perfectly prepared slice of pizza by Bar Cyrk (well, because this pizza princess can’t go anywhere without indulging in her kryptonite).

Sometimes I think I am a large man who can eat endlessly, but unfortunately that is not the case. Despite me telling my self I could do it, and wanted to do it, I simply could not sample all the tasty treats at the festival. Oh, the struggle. 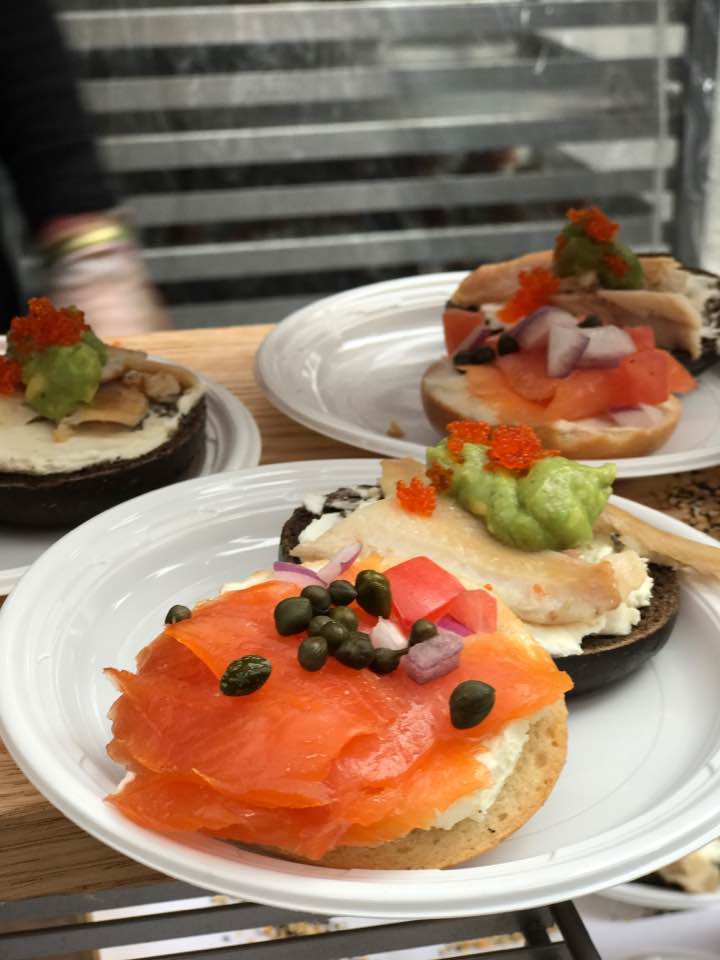 But I compromised with myself and instead went for the wine and beer tasting, mostly because it was only a couple of sips of each and not an entire serving. The smaller pours were ok for me because it was only meant to compliment the food, not serve as the main attraction. After all, this wasn’t a beer and wine festival, and like a true foodie, I prefer to absorb my calories in solid form anyway.

Patrons were allowed to redeem their alcoholic tasting portions at the actual venue. This allowed me to experience the venue and scope out a new neighborhood watering hole for my next happy hour locale. And despite the fact each participating bar was not right next to each other, they were within walking distance and finding them made it feel like a sort of scavenger hunt. 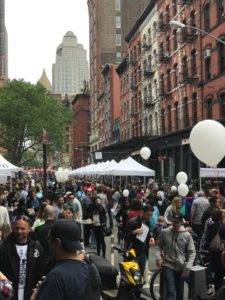 The crowd at 2017 Taste of Tribeca

But it wasn’t just fun and  games for the adults, the kiddies got in on the fun too. There was live music sponsored by City Winery where groups of kids danced and jumped around and an entire fun zone including a safety learning ambulance sponsored by the Hook & Ladder 8 Fire Truck and a pasta-making station by Eataly NYC Downtown.

Overall, it was a great, feel-good event for the whole family (and neighborhood) to enjoy! Next year I’ll come with a little more room in my belly.

Some call me "The Cuban Carrie (Bradshaw)" because yes, I love love, fashion and hilarious conversations with my best girlfriends, but more than all that, New York City (and all it's yumminess), have my heart forever. I'm originally from Miami (of Cuban and Spanish descent) with a penchant for global cultures and cuisines. Whether those bold profiles come through a bite or a sip, I'm game for (almost) all things ingestible and imbibeable (is that even a word?). On most days (and nights and all hours in between), you can find me scouring the pages of culinary magazines and articles, online reviews, and of course, the proverbial self-proclaimed "foodie" Instagram profiles, in search of the latest and greatest in this wild world of food and beverage we live in. From fancy and fabulous to not so frilly, I'm a lover of ingenuity and insanity as it comes across on a dish, in a cup, or even suspended in the air (yes, presentation plays a big role sometimes!). Come along for the ride as I discover the Big Apple (and beyond) one bite, sip and 'gram at a time!