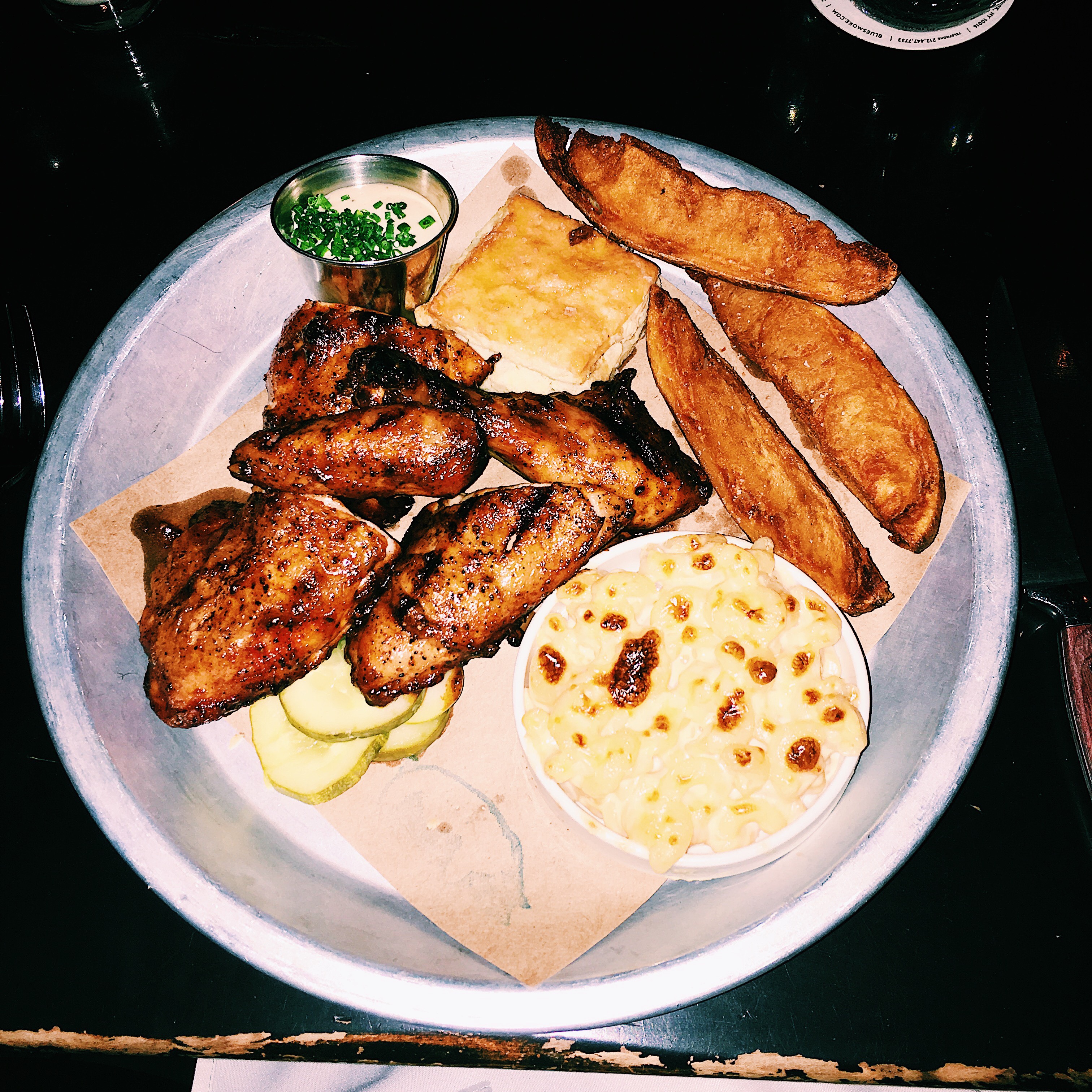 Despite being two of the unluckiest humans on God’s green Earth, the Fatbois won Phoodieur‘s Spring 2017 Restaurant Week Contest, earning themselves a gift certificate to Union Square Hospitality Group restaurants (Thank You!!). 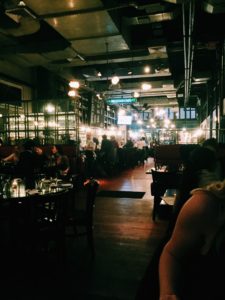 The selection process was daunting, with over 14 options to choose from. Our plan of attack was to single out the most artery-clogging cuisine, and what better way to do so than with some southern-inspired barbecue? One glance at the Blue Smoke menu, and we quickly jumped on OpenTable to make a reservation. With locations in Flatiron and Battery Park, we embarked to Flatiron for some Monday Funday action. 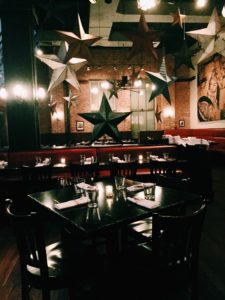 Upon entering, we were greeted by a full bar with a spacious yet intimate atmosphere, complete with mood lighting to set tone. We settled in to peruse the menu and gravitated towards the From the Pit selections. For just $28 you get a smorgasbord of your choice of one meat, two sides, along with a pickle and a biscuit. For $5 a pop you can add even more meat and sides to the lineup. Jess’s lineup included Pulled Pork, Mac & Cheese, and Barbecue Baked Beans! 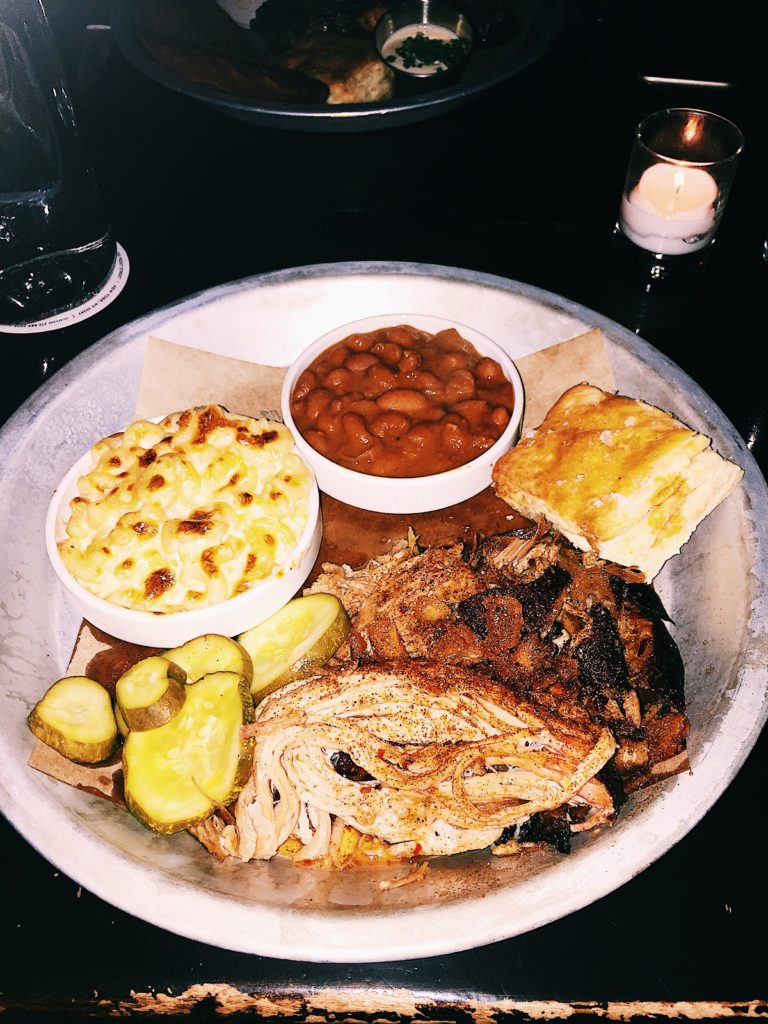 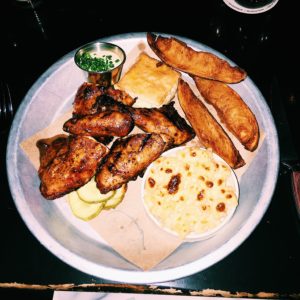 Christie opted for the Backyard Chicken, Mac & Cheese, and Potato Wedges. The waitstaff was extremely courteous, reminiscent of that true Southern hospitality. Once our spread was in sight, our mouths started watering à la Pavlov’s dogs #PavlovTendencies.

We wasted no time in getting knee-deep in barbecue sauce. Pro-life tip: keep an artillery napkins and hand wipes on standby. That being said, we devoured every bite. Each morsel of the pulled pork was both tender and flavorful.

The chicken came right off the bone with a subtle, smoky flavor. The mac & cheese featured a delightful contrast in textures with a crispy top layer and a creamy center. It’s the kind of mac & cheese you wish your mom could make, with a mild hint of Gouda. 10/10 would bathe in it. Next came the potato wedges, crispy and seasoned to perfection (not to mention THICK AF). BBQ isn’t complete without the sauce, of which featured light notes of vinegar. The baked beans, smothered in BBQ sauce, were savory with a kick.

To top off the meal, the delicate, flaky, buttery, biscuits will melt in your mouth but not in your hands ;). They were easily the best biscuits we’ve ever had and we relished each crumbly bite. You know the food is good when words are replaced with creepy groans. 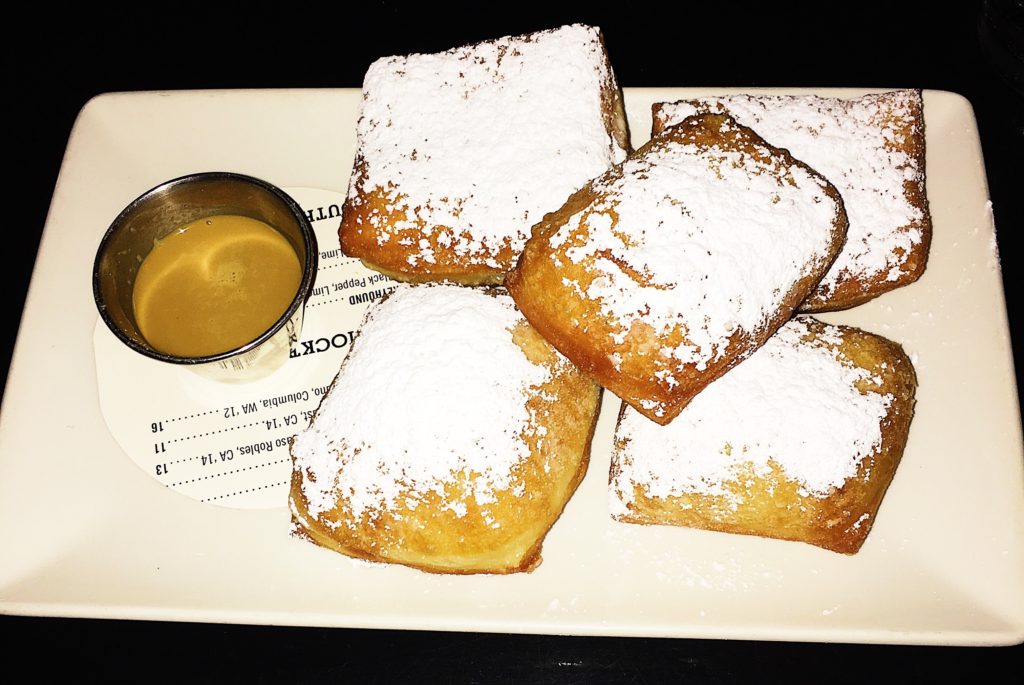 Beignets by the Piece 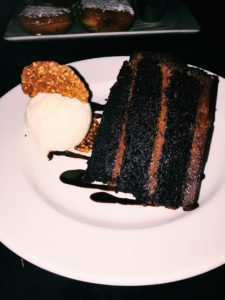 After pushing full to new levels, we decided to push the envelope even further by ordering two desserts. Feeling adventurous we decided to try beignets for the first time with their Beignets by the Piece, with coffee and chicory creme Anglaise. For that chocolate fix we also ordered the Chocolate Layer Cake featuring bittersweet chocolate ganache, chocolate mousse, and toasted benne seed ice cream. The beignets were light and fluffy with a dusting of powdered sugar, while the juxtaposing chocolate layer cake was rich and decadent. Our tastebuds did backflips of joy, skyrocketing Blue Smoke into our top 10 eateries. It gives Texas BBQ a run for its money, @Texas, come at us.

This has been our easiest rating thus far! One a scale of Ina Garten to Guy Fieri, we dub Blue Smoke a Guy Fieri! (Don’t judge us Danny Meyer!)

The District By Hannah An: All About The Noods