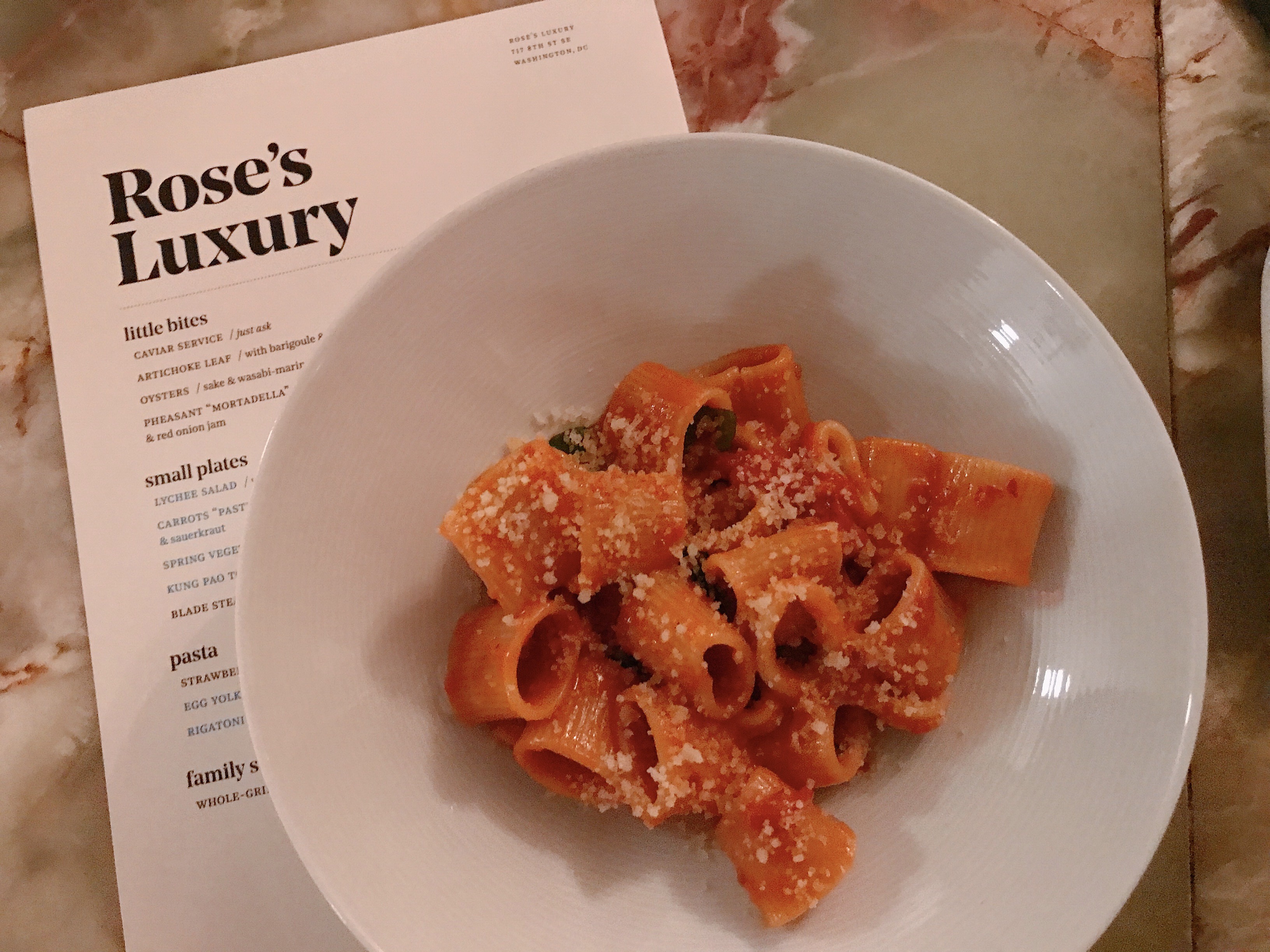 Lately, it seems as if I am developing a habit of standing in lengthy lines for dinner. First Street XO and now Rose’s Luxury. The question that is always asked: “was it worth it?”

You’ll have to read and find out! 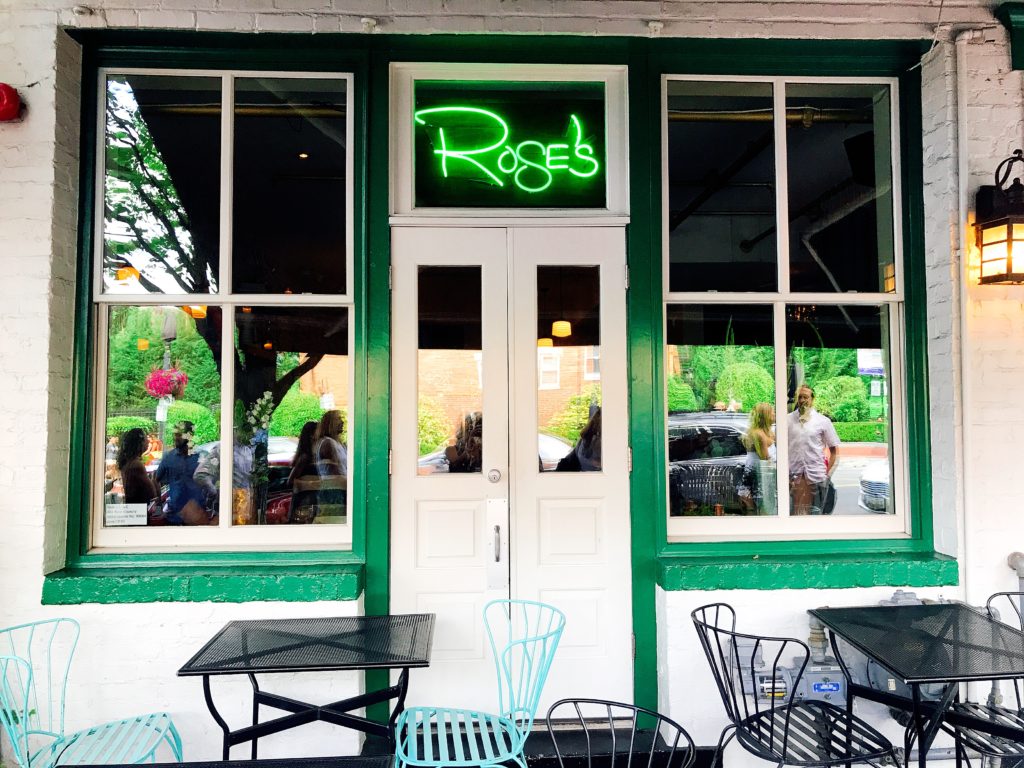 For those of you unfamiliar with Rose’s Luxury, I thought it might be helpful to have a little background on the restaurant. Rose’s was named Best New Restaurant of 2014 by Bon Appétit and two years later Chef Aaron Silverman was recognized by Food & Wine as the Best New Chef in 2016. Quite the impressive resume and it continues to grow as Rose’s was recently awarded one Michelin star in the inaugural Michelin Guide for Washington D.C. Chef Silverman’s focus is not just on the food and kitchen. His primary concern surrounds making his patrons happy and showing them a good time.

How did the restaurant get its name? Great question and one of which I adore the answer. Rose was the name of Chef Silverman’s late grandmother who was quite the epicurean. The luxury represents Silverman’s pursuit and obsession for hospitality. I always find it heartwarming when a chef pays tribute to a family member or friend who has provided inspiration throughout his/her journey.

Rose’s boasts an eclectic menu with Southern, Asian and Italian influences throughout. One might glance at the menu and think that there are limited offerings, but rest assured each dish is filled with flavor and creativity.

Now that I’ve laid the groundwork, let’s get into the details, the FOOD!

Seeing as it was a Friday night, we decided to grab an Uber and make our way to the Capitol Hill neighborhood to secure a proper spot in line. Several others had a similar notion as we arrived around 4:45 pm and there were at least 20+ people in front of us. We scurried to the back of the line and began to wait.

5:30 pm: Watching the second hand on my watch move ever so slowly, the line crept closer and closer to the door.

5:45 pm: Getting antsy, I took a walk over to the door to check out the menu. A few minutes later the lovely hostess escorted us inside. Whew, thank goodness. A cocktail was most certainly in order at this point. “We can seat you around 9:30 pm or you can try to our bar upstairs.” Before my friends even uttered a word, I was sprinting up the stairs, well as much as you can sprint in 3-inch heels, to get our name on the list. The odds were much better upstairs. We hung out and had a cocktail or three.

Tip: Unless you are the POTUS, I would recommend dining on a weeknight and if you don’t even want to consider waiting, you can always hire a Task Rabbit!

Glancing at the menu over cocktails, we already had our eye on a few courses. In the back of my mind, I knew we wouldn’t go wrong with anything we ordered. Chef Aaron Silverman has quite the reputation for making killer food. 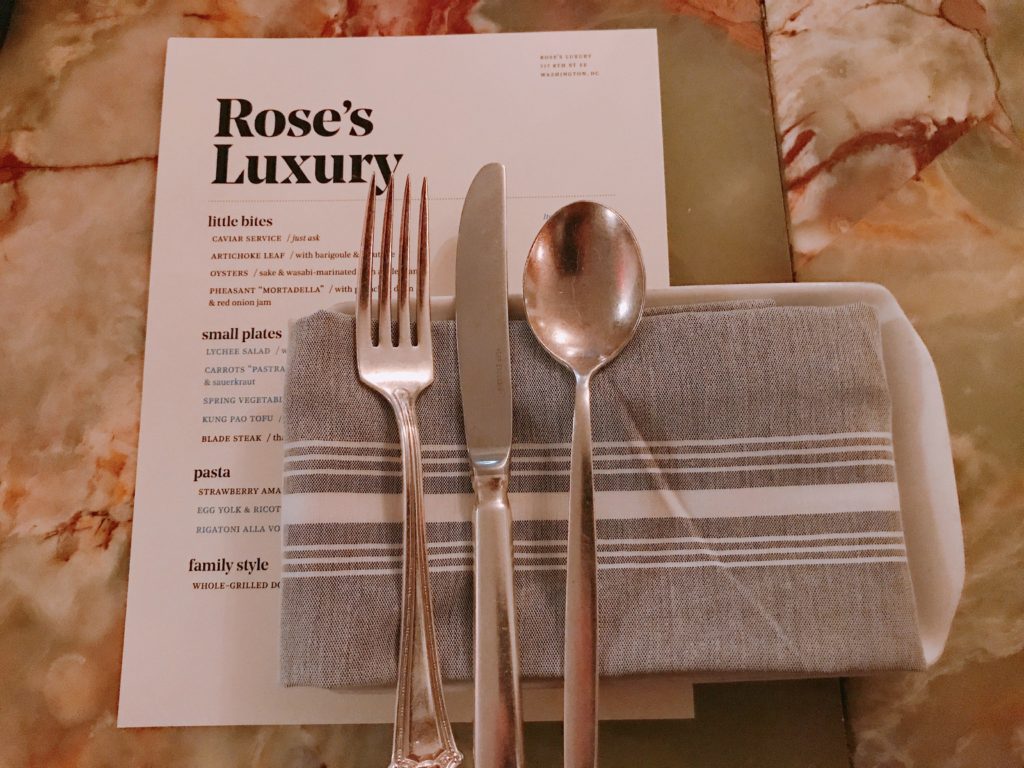 My one girlfriend, who had the pleasure of dining at Rose’s before, recommended that we order Caviar Service from the little bites section of the menu. Having a love for all things caviar, I couldn’t resist.  Seriously, how darling is this setup? Served with crème fraîche and sand dollar size potato pancakes, I thought I had died and gone to heaven. Between the three of us, we devoured this in a matter of minutes. 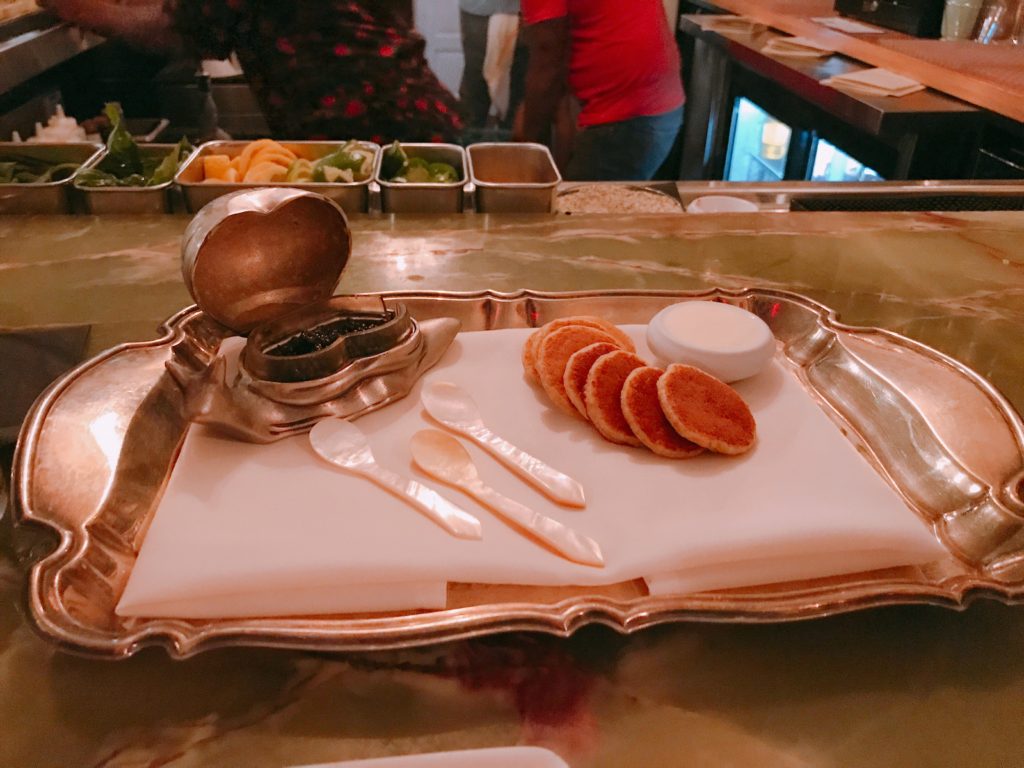 Our next two courses were Asian inspired. The first dish was a deconstructed Lychee Salad composed of Pork Sausage, Habanero, and Peanuts. I know that the ingredients might sound a bit odd, even looking at the dish before it was mixed up, it looked a little strange, but I promise this dish will blow you away. We were instructed to mix everything thoroughly before taking our first bite. Insert eye roll here. No words. You could only hear the moans from the three of us, which caused a few patrons to turn their heads, whoops! My first bite had so much depth, it was hard for me to take it all in, but of course, that was just an excuse for another bite. The spicy-garlicky pork sausage was offset with hints of creamy coconut and bright, floral lychee fruit while the onions and peanuts provided an element of sharpness and crunch. If we hadn’t ordered the entire menu, another one would have been on its way. 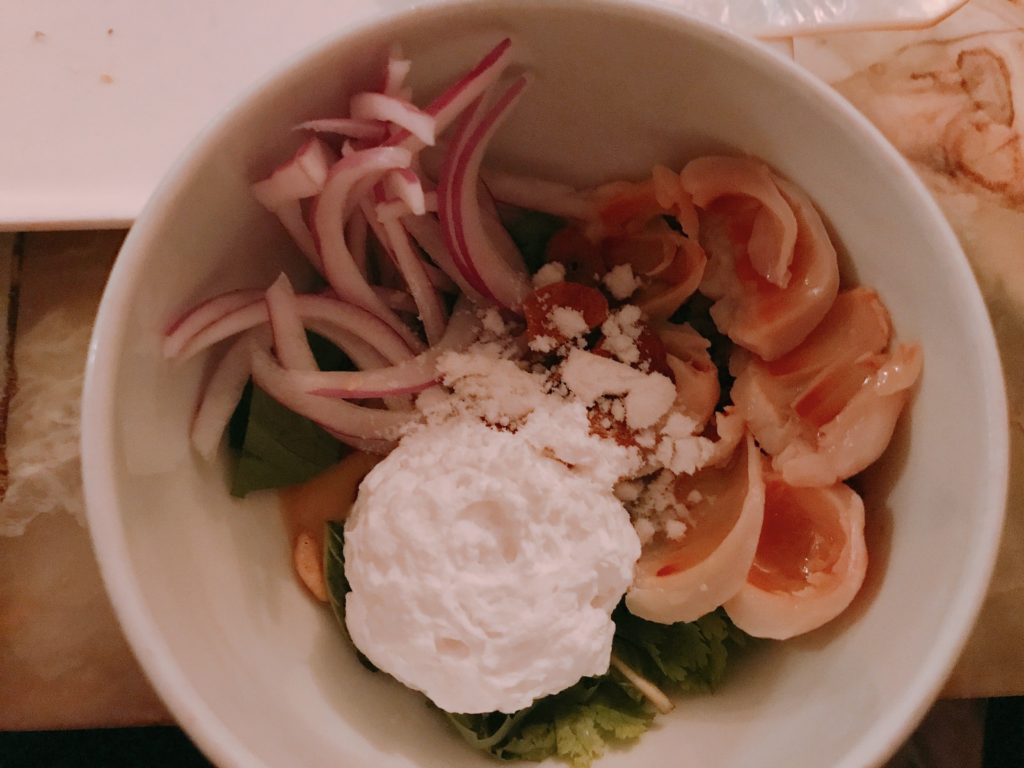 Our next small plate was the Thai Marinated Pork Blade Steak served with Nahm Prik Slaw. Yet another lovely dish with typical Thai flavors. The slaw added an opposing texture which gave the dish a bit more character.  While this dish was lovely, I probably still would have skipped this and ordered two Lychee salads. They were that fantastic! 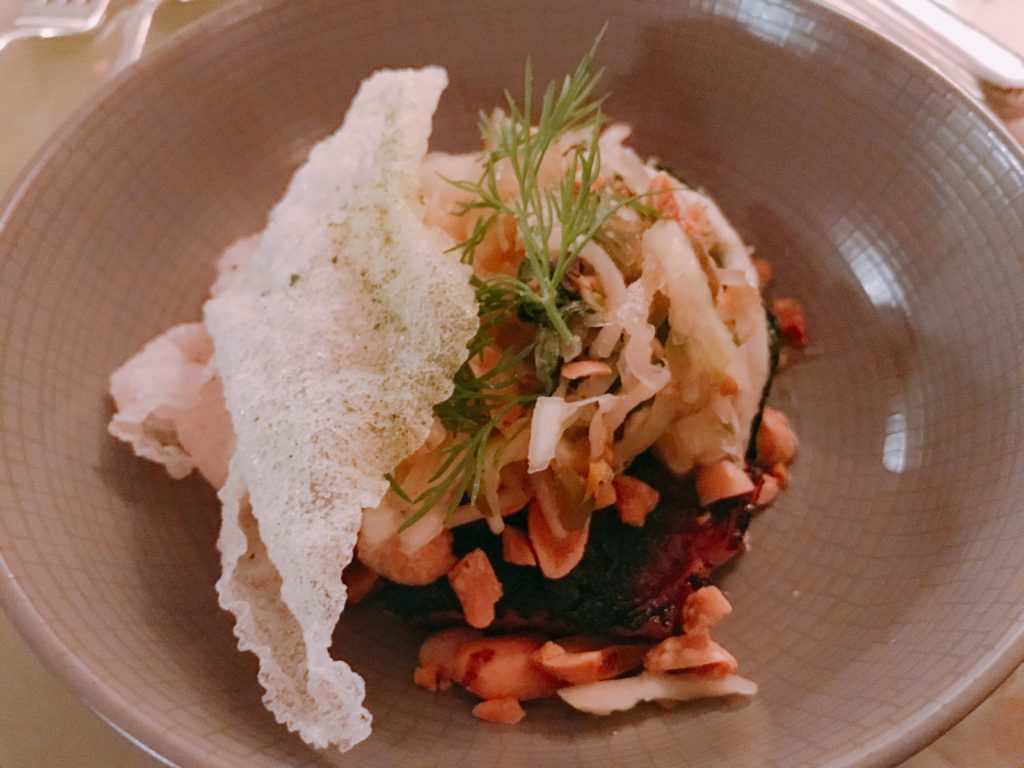 Moving on to the pasta portion of the evening.

We ordered two of the three pastas on the menu and then I may or may not have requested their famous “crack noodles”, Cacio e Pepe because who doesn’t want to try those?

Our first pasta dish was plated beautifully. It looked more like art than an Egg Yolk and Ricotta Raviolo. While the dish was lovely, it was a bit too rich for me. The peas provided a light and fresh contrast balancing the decadence of the raviolo. Admittedly, I only had a couple of bites as I was saving room for what was ahead. 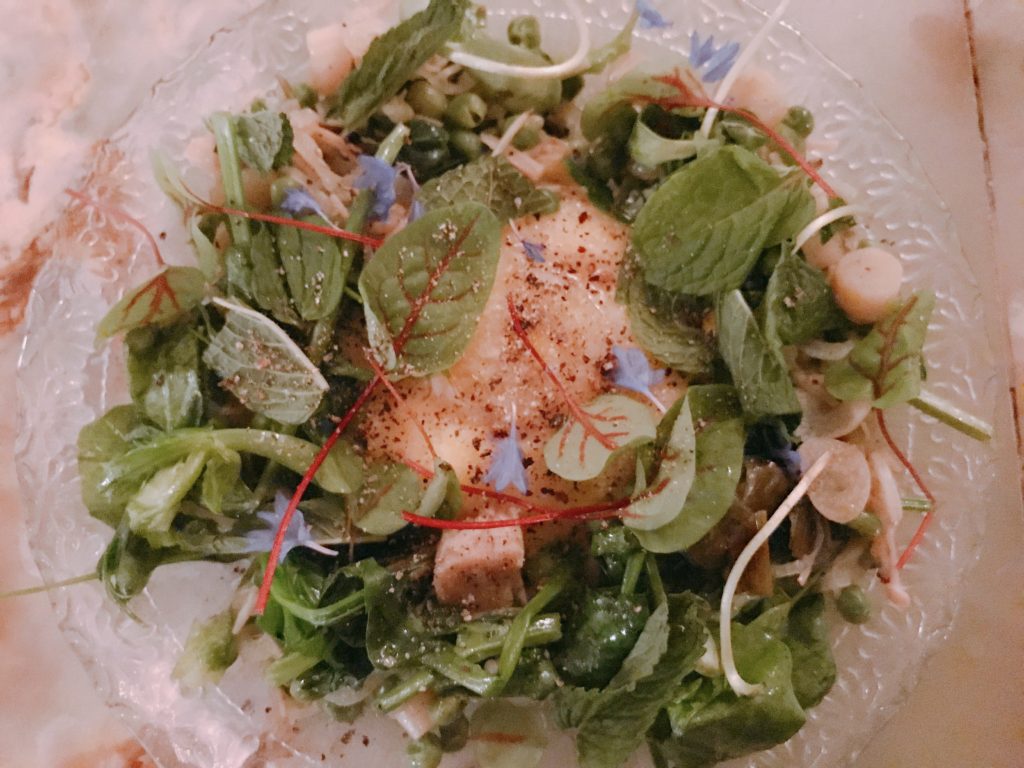 Our next pasta dish was Rigatoni Alla Vodka served with Squid and Genovese basil. There is nothing that I love more than vodka sauce and this dish didn’t disappoint. Each bite-sized tube of pasta was perfected smothered with the vodka sauce and the squid added a bit of spice to the dish. The dish was finished with a bit of Parmesan cheese. Pure perfection. 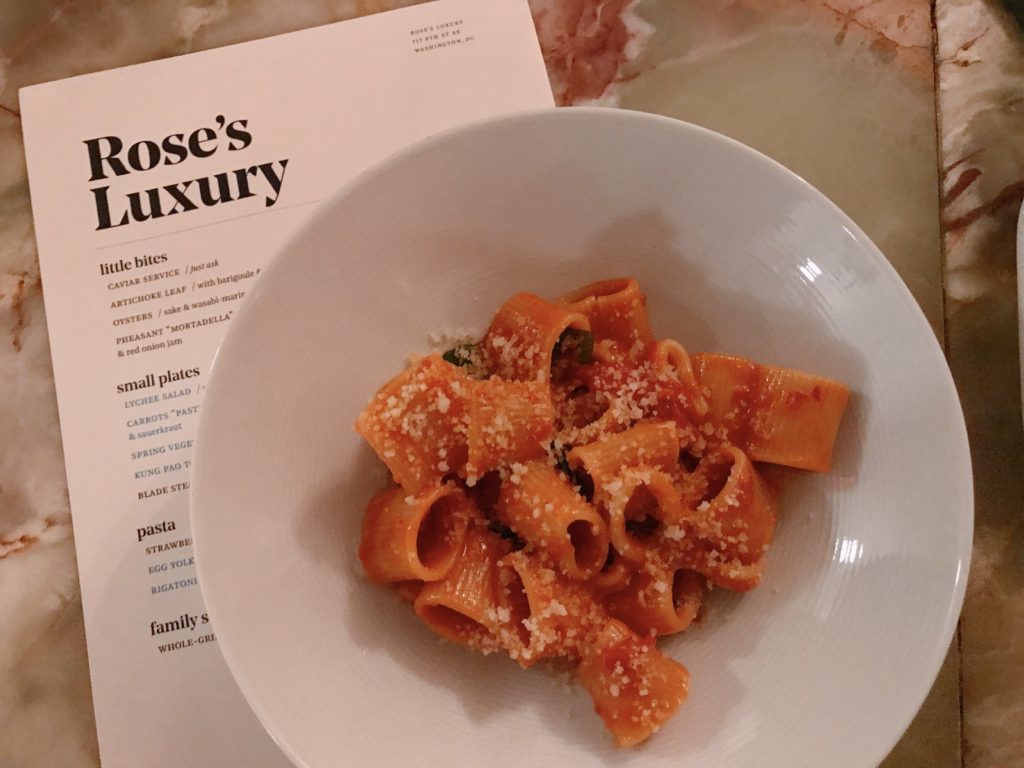 Scouring the menu outside, I noticed that Cacio e Pepe was not listed. Panic set in. Surely it was a misprint as I had read article after article on these so-called “crack noodles.” Once we were seated, I turned on that Southern charm and asked our server about these.” Is there ANY way possible that we can order this?” After checking with the kitchen, we got the thumbs up.

When the Cacio e Pepe was served it was if the heavens had opened and the angels were singing. I had not had this dish since I was in Rome last summer so I was curious to see if they would live up to Roman standards.

Confession: I had the hardest time sharing this dish as I wanted each buttery noodle for myself. Imagine a bowl filled with al-dente noodles smothered and covered in butter, pepper, and Pecorino cheese. Literally, I died. Clearly the winner of the pasta dishes in my opinion. 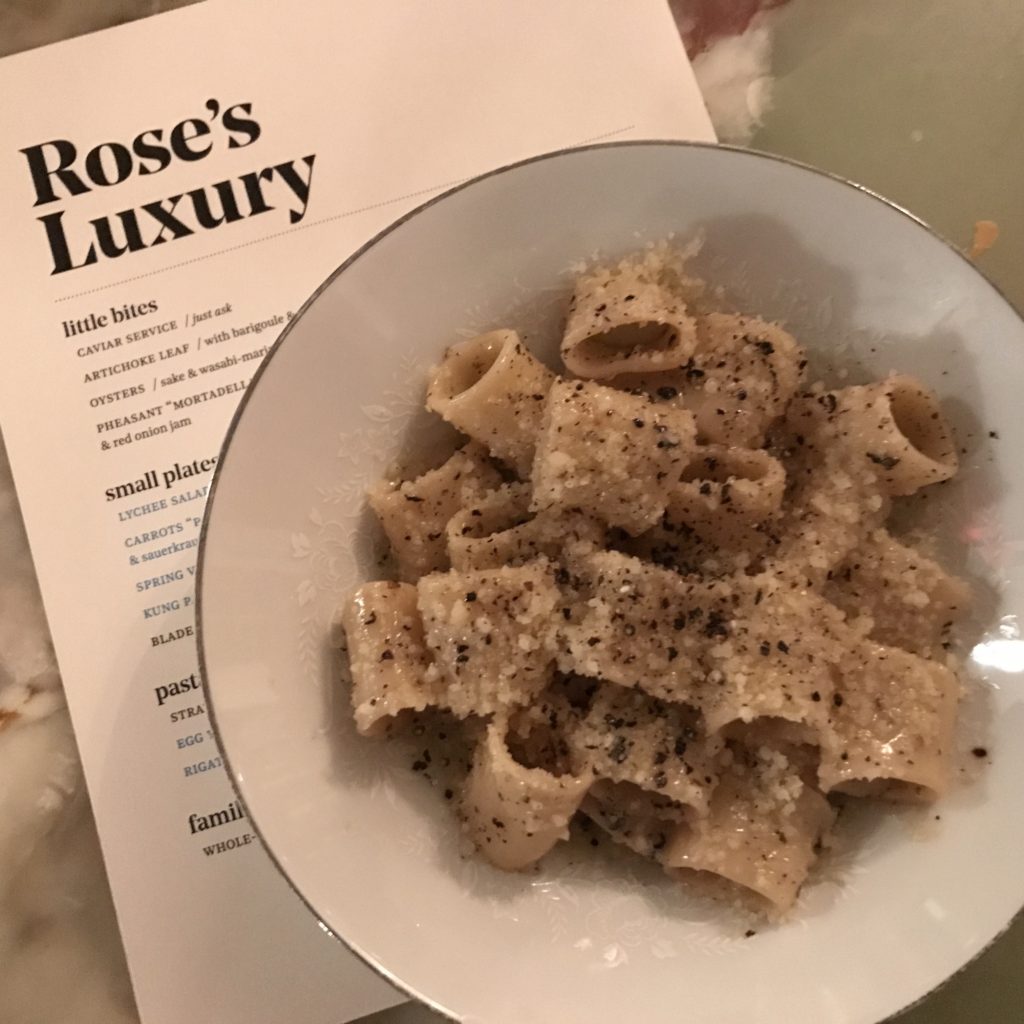 You would think that three women would have exploded after all of the food we ordered, quite the contrary. Each dish was reasonably sized allowing you to experience many flavor variations without feeling overindulged. Therefore, desserts were in order.

Our first dessert delivery was the Apple Tart served with Cinnamon Ice Cream and Cabot Clothbound Cheddar. I really enjoyed this one as I am quite the fan of sweet and savory together. The cheddar added a nice layer of flavors as well. 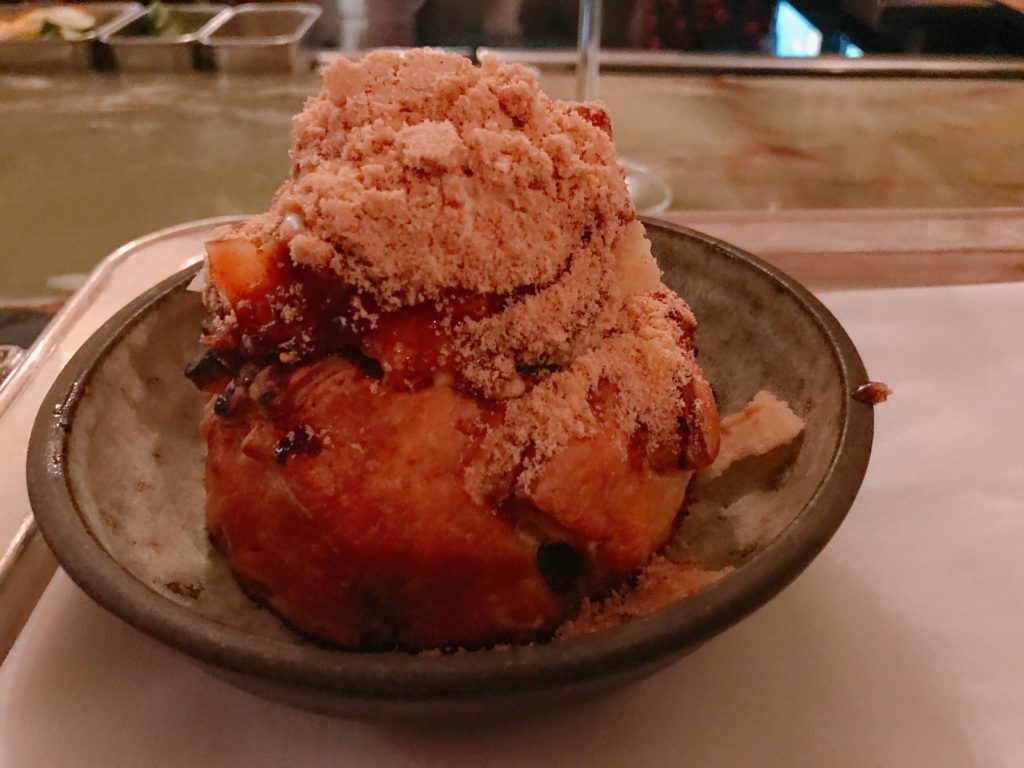 Our second dessert delight was the Innkeeper’s Pie served with Walnuts and Milk Ice Cream. Even though I love sweet and savory, I am more a chocolate and walnut enthusiast. The creaminess of the ice cream was the perfect compliment to this decadent dessert. 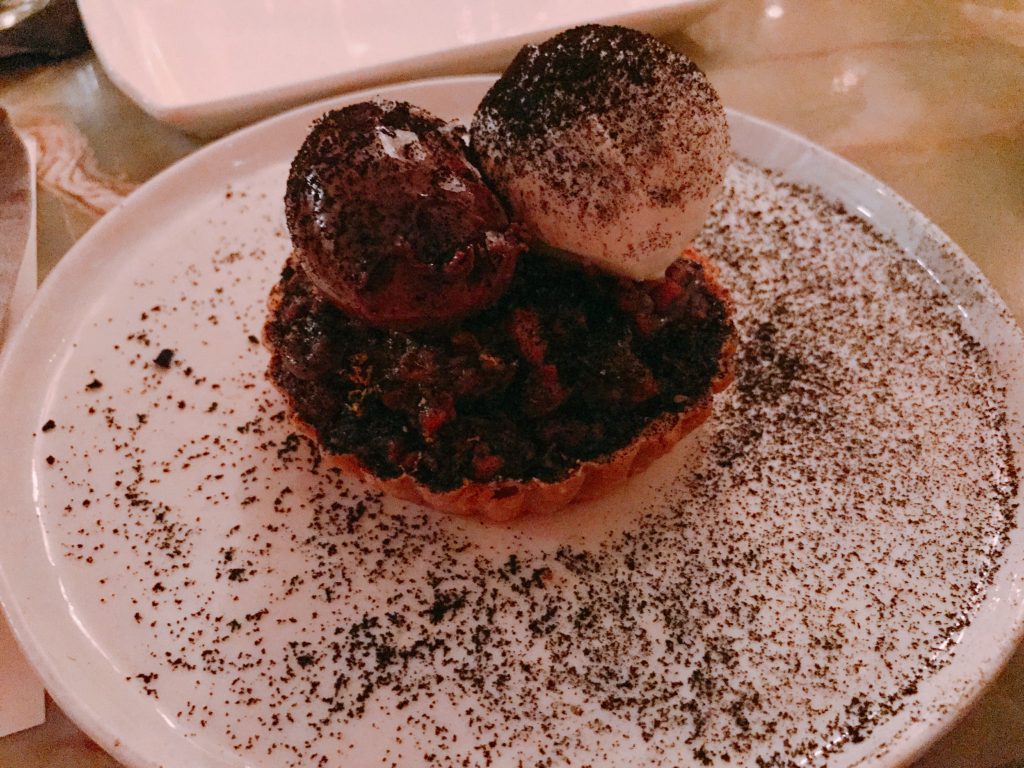 Rose’s Luxury lives up to the hype. The food is creative yet approachable and the service is top notch. I never second guessed my decision to wait an hour and a half to dine upstairs. Heed my advice and arrive early. I guarantee you will stand in line, but at least you will be closer to the door than down the block.

May the odds be ever in your favor.