Born and raised in Sacramento, CA, 10 months ago I made the biggest move of my life to New York City. I am a bartender, and I have been in the restaurant industry for 11 years. I currently bartend at an upscale diner in lower Manhattan making handcrafted cocktails and boozy milkshakes… yummm. When I am not working, I am frequenting the local dive bars, brunching with my pals in lower Manhattan’s hot spots, having dinner dates with my boyfriend, and traveling the east coast soaking up the eating and drinking culture. I love a local beer with a whiskey and a pickle back, a sangria or a mojito on a hot day, or a lovely glass of crisp New Zealand Sauvingnon Blanc with dinner. Cooking has also become a passion of mine over the past few years. Good Mexican cuisine is tough to find on the east coast, so I always find myself making a huge bowl of homemade guacamole or roasted vegetable enchiladas. I am also a huge advocate for crockpot cooking, making healthy black bean or lentil soups during the frigid winter months here in NYC. I can’t wait to share with you all my adventures of discovering new food, restaurants, fun and exciting ways of wetting my whistle, and the sheer beauty and history that the east coast has to offer us.

While fictional characters like Long John Silver, Captain Jack Sparrow and Captain Hook pop into our minds when we think of pirates, did you know that in real-life, there was actually a New York-based female pirate named Sadie Farrell?

Although we don’t condone piracy, or any acts of violence here at Girls on Food, the story of Sadie and her gangs of New York history is a fascinating read.

When our friends at Bumbu Rum asked me to come up with a cocktail recipe for our readers, I decided to use the underworld of late-1800’s New York as inspiration (Pirates of the Caribbean has inspired too many cocktails).

Bumbu Rum is small-batch, hand blended and uses all-natural native Caribbean spices called “Bumbu”. Bumbu Rum has complex flavor notes including a butterscotch and banana aroma with a subtly sweet but tobacco-leaf pop in the finish.

Since these flavors work well with festive, citrus flavors, I decided to pair it with calamansi juice. Traditionally calamansi juice is sipped on in the Philippines but it’s growing a following in the states. The toasted sesame syrup used in this cocktail adds an unexpected toasty flavor to every sip. I make a bigger batch of syrup with this recipe, since it has versatility for other cocktails, coffee drinks and baking. When making this syrup, the toasted seed scent is heavenly, so make sure to take a moment to appreciate this aroma.

I’m dedicating this cocktail to the famous female swashbuckler, later known in history as the Queen of the Waterfront. If Sadie was still with us today, we could see her sipping on one of these before a stroll on the Hudson River.

Queen of the Waterfront

In a sauce pan, add 7 tablespoons of sesame seeds to a dry skillet and toast until they’re a light golden brown. Make sure the seeds don’t turn black and remove from heat.

Then, make the simple syrup. In a sauce pan, pour 1 cup of water, add 1 cup of white sugar and heat until sugar has dissolved into the water.

Bring the simple syrup up to almost a boil and add toasted sesame seeds. Allow to the seeds and syrup to steep overnight. Strain the seeds.

Be sure to raise a toast to Sadie, cheers!

Lucky for us here in New York City, no matter what you’re in the mood for, there is surely a restaurant that caters to your every craving or diet. Table Verte grabbed my attention with their take on French Vegetarian cuisine. I have never been a fan of many vegetarian restaurants because all they sell are faux-meat replacements for the real thing. And in an age now where people are avoiding soy and wheat, Table Verte made a point to have no fake meat products, so we wandered down to the quiet east village eatery and checked it out. 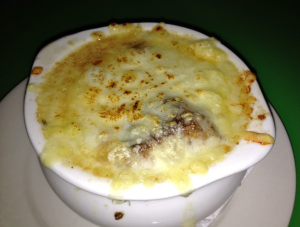 We started off with the french onion soup. It came to the table piping hot out of the oven in a small cute ceramic bowl. The soup is made with vegetable stock and topped with their house made onion bread and melty swiss cheese. MMmmm vegetarian comfort food… The onion bread was a fabulous added bonus to the soup. And finally! French onion soup without beef stock! Thank you Table Verte! 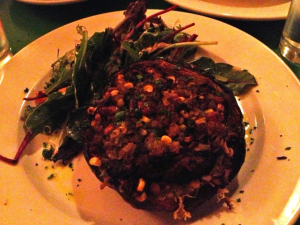 There are several items on the menu that are labeled vegan and gluten free, which is becoming a welcome addition to more and more restaurant menus. We decided to try the Stuffed Roasted Squash. It was acorn squash stuffed with corn, spinach, tomato, mushrooms, beans, rice and spices, and served with a salad. I really enjoyed the homemade feeling of this dish. It was filling, healthy, dairy and wheat free, and I didn’t feel like I was cheating on my diet. 😉 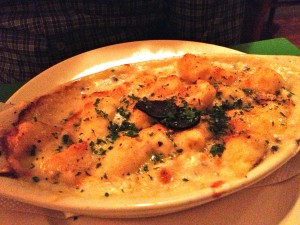 And for the indulgent vegetarian: try the Gnocchi Parisian au Gratin. The gnocchi was baked with a cream sauce, swiss cheese and a truffle essence. It was rich and delicious, and anything truffle related is a-ok with me. This is one of those dishes that when paired with a large glass of white wine turns a bad day into a good day. But don’t forget to BYOB! They don’t have a alcohol license yet. 🙂

Oh Valentines Day…you either love it or you hate it. But either way, it’s a great day to overindulge. Two of my favorite things to overindulge on is cheese and chocolate. Throw a couple glasses of wine in there, and we have the perfect evening. Luckily NYC has some amazing places to choose from. If you’re looking for a practical present this year, take a look at these cheap life insurance quotes.

Beecher’s is a homemade cheese shop upstairs, and downstairs in The Cellar, is a small dark restaurant and lounge area. We arrived around 6pm, and for only being open one hour, was completely packed. The hostess told us it would be about 20 minutes for a table. Something I thought was interesting is that we were ID’ed upon walking into the restaurant. Only 21 and over allowed? Oh, yes please. We walk over to the bar, and order two glasses of wine. They have $6 wine specials for happy hour which was awesome.

We tried a few of their cheeses and a vegetarian flatbread, but one thing that stood out was their homemade penne mac and cheese with curried cauliflower and sweet onions. It was rich, creamy, fresh, and so so SO delicious. I could of eaten an entire bowl of the curried cauliflower with cheese sauce. One order of the mac was about $16, and more than plenty to share.

Beecher’s also has a smaller cheese shop at Pike’s Place in Seattle for my west coasters.

After dinner, we walked across Union Square to Max Brenner, which is a chocolate restaurant with chocolate everything. They even had a separate bar for just chocolate-related non-alcoholic beverages. We went for a fondue sampler, which featured their housemade white chocolate, milk chocolate, and caramel fondue. For dipping, they provided us with strawberries, bananas, cookies, and pound cake. We paired our fondue with a glass of Columbia Crest Sauvignon Blanc and a Tiramisu inspired cocktail, garnished with a lady finger.

The beehive looking ceramic pots were awesome and practical way to keep the chocolate warm. I’m hoping to find one of these to make some fondue at home!

Brunch in New York City is like buying a metro card, you just have to do it. I mean, don’t we all need a great excuse to why we’re stumbling down the street drunk at 5 pm from a “all you can drink” mimosa brunch? My boyfriend and I enjoy getting out once a week to do just this. And I have to tell you, NYC doesn’t come up short when it comes to brunch. 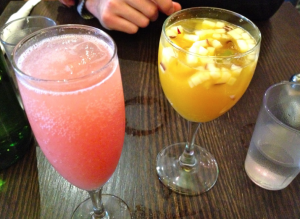 This week brought us to Cafecito Bogota, nestled in the quiet Greenpoint neighborhood of Brooklyn. For $16.50, you get two drinks (either a mimosa or sangria) and a bottomless cup of hot tea or coffee, AND your breakfast. Such a deal. They also have a selection of fresh juices made in house, today being guava, passion fruit, or orange/kiwi. I went with a guava mimosa, and my boyfriend tried their housemade sangria. The guava mimosa was a lovely change from boring old orange juice. The white wine sangria was fabulous as well, with passion fruit and crisp chunks of red and green apple. I enjoyed the fact that it was obviously made that day. 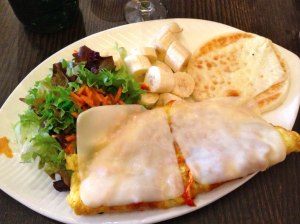 I had the Tortilla Colorada, which was a three egg omelet with corn and a harmonious mix of red pepper and paprika, topped with queso blanco. The corn was an unfamiliar but delightful addition. The eggs tasted like you would make them at home. En lieu of homefries or breakfast potatoes was a mixed green salad with a basic Italian dressing and chopped banana…AND and arepa…topped with cheese…YUM.

If you aren’t sure what an arepa is, it’s a Colombian staple made of ground corn dough. It kind of tastes like a crumpet made of polenta. There are arepa bars all over NYC, and they use it as sandwich bread. You can also buy them in grocery stores back here as well. I don’t hear much about them on the west coast, sadly. Here it was simply served as a side dish for my omelet. Delish. 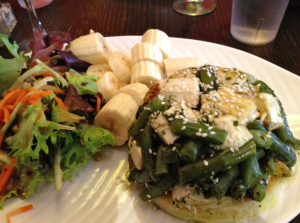 Next we tried the Punta Verde, another one of their vegetarian options, which was caramelized tofu sauteed beautifully with string beans and pesto, all resting on top of an arepa. I was unsure what to expect when we ordered it, but it was a welcome surprise. It was absolutely delicious.