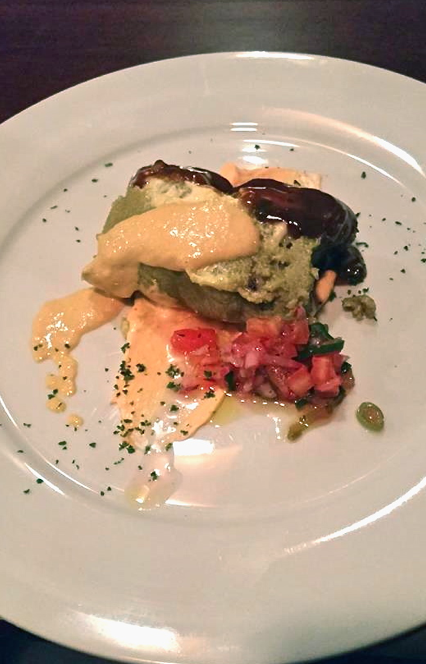 So, I spent two weeks in Nicaragua this summer, and I know you are probably expecting an article on traditional Nicaraguan food. Well, I promise you that’s going to happen soon (if you count beer and rum as food, that is), but what really has me hung up after my expeditions does not hail from Central America. It’s Peruvian, and I have to share it with you.

Friends, I would like to introduce you to Tamalito Verde, a gift from above (although if you’re reading this from America… I guess it’s more like a gift from below). Tamalito Verde can be found in Managua, the capital of Nicaragua, at a restaurant called Acholado. 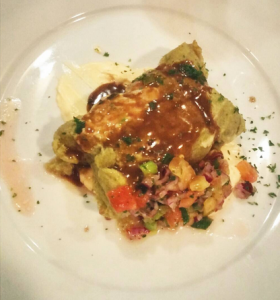 It was love at first bite.

As you can see, Tamalito Verde begins with a soft and comfort-food-esque corn tamale piled high with various sauces. Typically tamales have a leafy casing that you need to remove prior to eating, but this one didn’t. Maybe they removed the casing before plating it because we looked like incompetent tourists? Either way, the tamale is ready to go when it arrives and your fork simply sinks into its green goodness – almost like melted, buttery cornbread, but less crumbly and doughier.  Actually, it’s very similar in consistency to polenta (cornmeal concoction from Italy) if you’ve tried that. Anyway, scoop some sauces all up on your forked-up pile of whatever-you-want-to-call-it and you are ready for your first taste: sweet, spicy, and savory all at once, thanks to the sweet corn/chipotle dynamic.

Maybe all the “sauce piling” doesn’t make it the most photogenic of fluffy green mounds, but I can assure you, Tamalito Verde is life-altering.

I suppose, though, you would like a more thorough ingredient list before agreeing with that statement and hypothetical taste-test. Unfortunately for me, and very, very appropriately, seeing as this was Central America I was in, the menu was entirely in Spanish. I can see this headed in an embarrassing direction for me, considering many readers may be fluent in Spanish, and I am most definitely not. Thus, I would prefer to refrain from playing part-time interpreter here and leave you to your own devices. But, I am a food blogger and we are known for jumping in with two feet and one fork, so here goes: 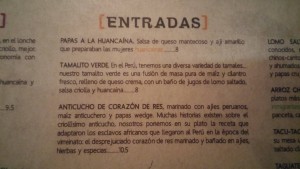 Why didn’t I pack that dictionary?

According to Google, Tamalito Verde consists of: corn, fresh cilantro, cream cheese filling, salsa, huancaina sauce (made from yellow potatoes), and “juices of lomo saltado,” which is the juice from a popular Peruvian dish, lomo saltado. Just found out lomo saltado is made from strips of sirloin and potatoes.

Excuse me while I have a quarter-life-crisis please.

Remember when I told you the meal was life altering?? This is not. What I had. In mind. Like I’m literally sitting here raving about my favorite meal from vacation, and it contained sneaky meat. I feel betrayed, and very hopeful that Google Translate is wrong.

But it’s time to move on to something worse….

If you cringed while reading the above description and it wasn’t because of the sirloin, I’m gonna take a wild guess. CILANTRO. It’s a good thing I didn’t attempt to read the description very thoroughly before ordering, because I would have run far, far away.

Cilantro is one of those herbs that you either hate or love and my hate runs deep for the green devil. As you can conclude from the photographic evidence I’ve provided above, Acholado’s chef clearly falls into the latter category, because that overzealous ration of smothering green herb doesn’t appear to be the work of a light hand. I’m not going to bore you with the story of how my meat-loving father and I finally realized we were indeed biologically linked (come on, how many Italian vegetarians do you know??) when we discovered our mutual vendetta against cilantro, which tastes like soap to us, and apparently like 4% of other humans…but trust me when I say it is a meal-ruiner.

Hence my admiration for Tamalito Verde, in which I tasted zero soap. It’s nothing short of a miracle, people. Thanks to my new favorite meal and restaurant, now I cannot only stand in the same room as cilantro, but EAT IT TOO!!! That’s right, I had my cilantro and I ate it too.

I will admit that I’m a bit jealous of the other 96% of you who actually know the true taste of cilantro, seeing as I can only ever taste Dawn and Palmolive, with exception to Acholado’s fine chefery. But I have a feeling that if you are in that majority who loooooves cilantro and has no idea what the heck I am talking about, you will also love Tamalito Verde. It’s basically a win-win situation.

So, long story short, you should probably head to Managua right now so you can stuff your face into this green beauty and I can resume crying over my disloyalty to the cows of the world.

P.S. Don’t tell anyone I said this, but I would eat Tamalito Verde for every meal if I could, even with the sirloin.

GOF Dish and Discuss: New York, I Love You