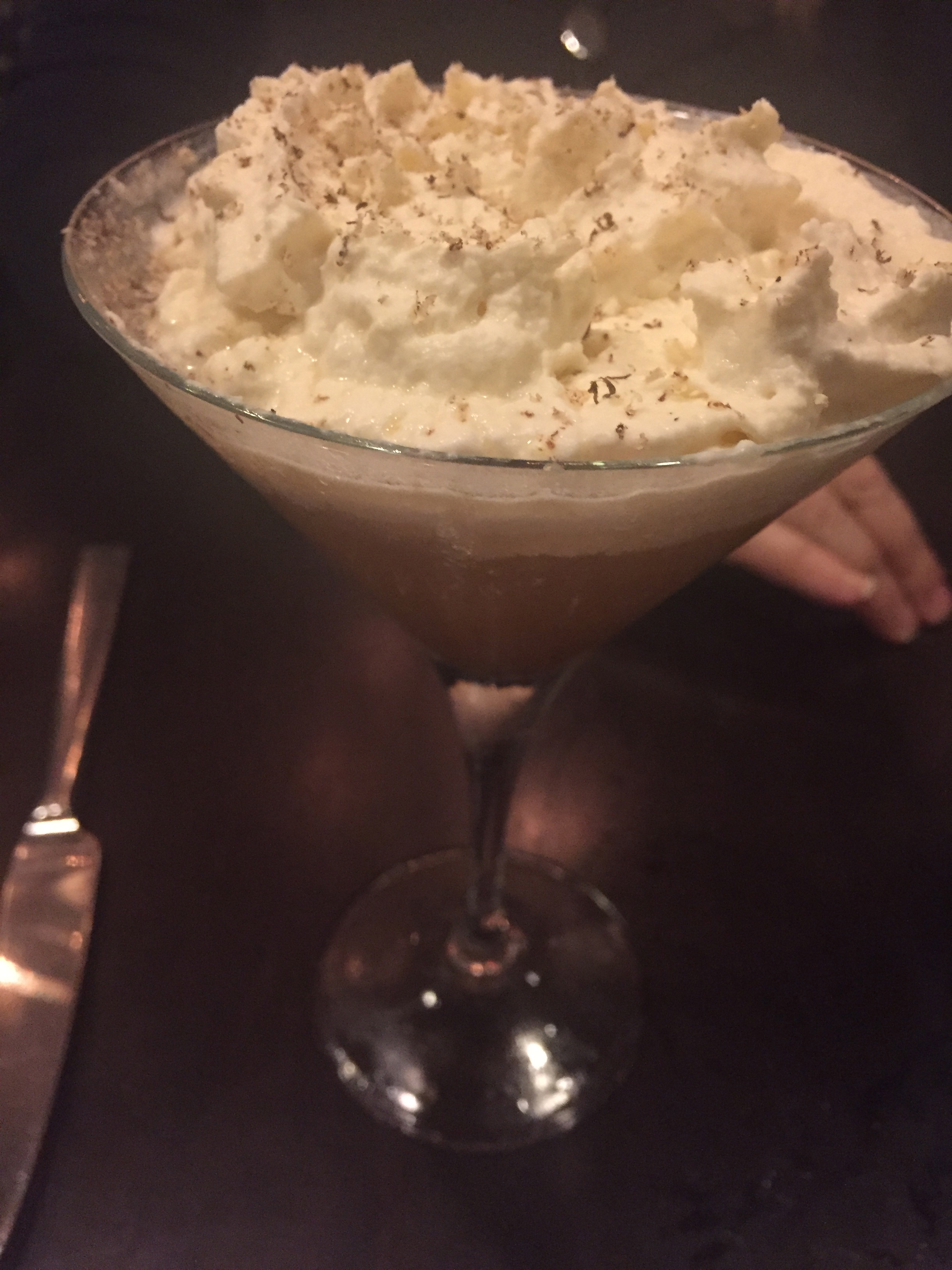 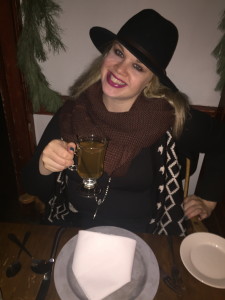 Ok, maybe I was technically in Old Town Alexandria, but I saw some monuments and traversed cobblestone streets just like a real tourist.  It’s exciting to know that I barely scratched the surface of this burgeoning foodie community and missed a couple of truly outstanding sounding tasting menus.  Methinks there will have to be a part two in a few months, I mean there’s always cherry blossoms to see.  After nearly seven hours in a car jammed up on I-95, we stumbled into a BBQ restaurant adjoining our hotel, The Hotel Monaco, a trendy meat paradise rife with artisanal cocktails and deliciously tender fare. 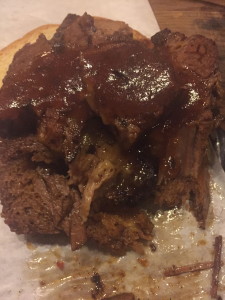 This slow cooked beef brisket with horseradish mashed potatoes, white bread, and BBQ was handled to perfection. So delightful that you can cut into it with a fork. 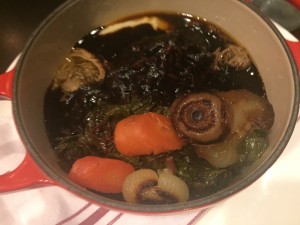 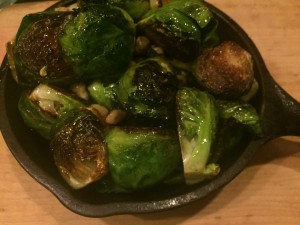 One of their signature cocktails aptly named “Catch Her In The Rye” is high west double rye, liquor 43, with orange hazelnut syrup is a straight up down south salute to all things strong and delicious.  If still alive, J.D. Salinger would have honored it with his reclusive seal of approval.  Their cocktail menu is expansive and has a little something for any adventurous diner looking to veer off course from a traditional glass of wine. 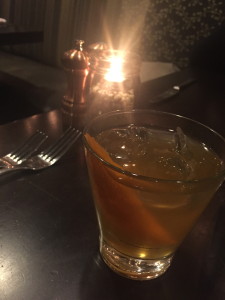 Also attempted at our table was the “Back To Basics” although I only believe that could be the case if you were lulled into a coma alcoholic of deliciousness.  This sweeter creation served in a martini glass combined Grey Goose vodka, pumpkin spice syrup, and coffee whip cream.  An appropriate period on a holiday meal or a lazy frigid Sunday afternoon. 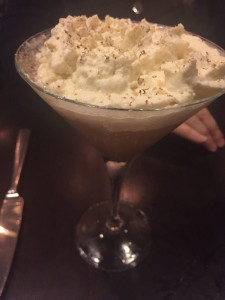 The “Back to Basics.”

The second night of my stay, I couldn’t help buy try the small chintzy scale take on Medieval Times also known as John Strongbow’s Tavern.  After walking past this castle-shaped establishment the first evening, it immediately went down in the book as “to be experienced my liege”. 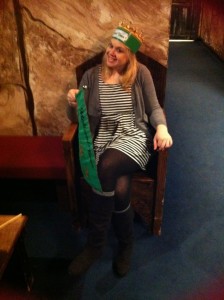 I’m a sucker for Medieval Times as you can see from this pictorial evidence.  So, how could I not go to the restaurant that boasts of being a little piece of ancient tomfoolery?  The drink menu was peppered with aptly named starters.  I asked for the most popular libation “The Dragon’s Kiss.”  It was cider and cinnamon whiskey served in a tankard or large glass.  I, of course, said Tankard, my good sir.  The atmosphere was more of a sports bar, and the food was not as authentic as I had hoped. 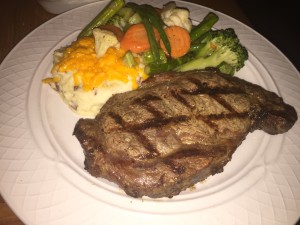 As you can see, my prime rib looks more Applebee’s than Arthur’s Round Table and the pretzel roll harkens mostly to a TGI Friday’s kitchen, but sometimes when anyone’s looking for noshes that can be your jam.  It still has an off and interesting charm that would entice locals to attend when they host one of their live events that fit the theme.  However, next time I’m looking for ancient epic adventure I may have to take another trip back to The New York Renaissance Faire as I wrote about earlier this year.  I mean, they have TURKEY LEGS there.

Finally, however, on the third day, I found an eatery that combined both the authentic cuisine and historical value of Old Town Alexandria.  After a bit of research and a few appropriately placed street signs, I realized we were staying right down the street from Gadsby’s Tavern Restaurant. 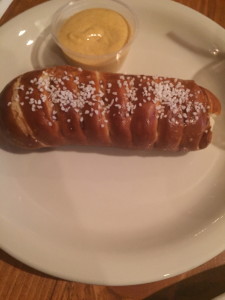 Founded in 1749 and named after Englishman John Gadsby, an entrepreneur who served as tavern keeper from 1796 until 1808.  Historical luminaries such as George Washington, Thomas Jefferson, John Adams, James Madison and James Monroe would dine here to be entertained and engage in hard and fast political discussions.  If you would like a more detailed account, you can read on here Gadsby’s Tavern History.

Beyond the essence of historical greatness nestled in the candlelight wooden chairs, the food was perfectly prepared and savory.  Baked Brie seems to be a staple at several restaurants in the surrounding area, but you won’t see me complaining.  To start, we began with baked brie en croute.  Brie baked in puff pastry and stuffed with cardamom-spiced apples and finished with raspberry coulis and sprinkles of cinnamon and sugar 9.  Am I in heaven because I see an angel in front of me.  Note to self: Megan, you have to stop using pick up lines on your food. 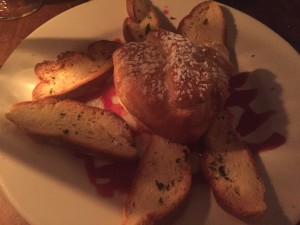 The entire meal was an 1800s phantasm.  Basking in the faint glow of period moonlight and soft candle flicker it was impossible to finish the ample portions.  For the main course, I had the much praised prime rib of beef.  Slow-roasted with Yorkshire pudding, horseradish sauce, whipped potatoes, and vegetables du jour 28 the cut of meat was massive!  Succulent and expertly braised, I cannot say enough good things about Gadsby’s Tavern. 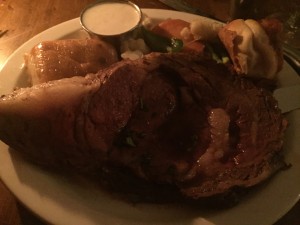 Pictured left, the prime rib and to the right an expertly crafted denouement to our three-course journey, an iced cake by recommendation from our period dressed server, it was light, and I maybe had the capacity to have to spoonfuls before asking kindly in a modern tradition to take the rest to go. 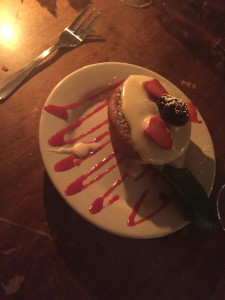 Thankfully, we have plastic bags now and don’t have to balance extra food in bear pelts.

They feature an extensive wine list. However, I chose to attempt their holiday beverage.  Warm apple cider with a heaping addition of rum.  They don’t scrimp on the pour, and I can easily say it will be very hard to attempt more than one.

An honorable mention has to go to the chain la’Madeleine that as a New Yorker I can only imagine is a distant cousin of Au Bon Pain and Le Pain Quotidien.  Any fresh, fast chain restaurant that gives me a croissant with my omelet is winning at mostly everything.  Not to mention I chose a variety of fresh ingredients and was not let down.  You can see the spinach happily peeking through the surface of the eggs. 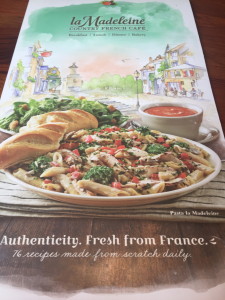 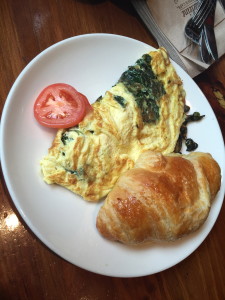 Also, on my way home I would be remiss without mentioning I FINALLY had a genuine Cracker Barrel meal with some many times fried chicken, and I will indeed never be the same again.  On that note, it’s time to hit the gym after all this decadence, so I may live to nosh historically again.  Goodbye Old Town Alexandria, land of meats, baked cheeses, and public transportation to monuments I shall miss you til’ we meet again.  Although, you rained on my sightseeing parade you created a storm of cuisine in my belly that I will not soon forget.

As I continue to eat my way through the always inspiring the United States I know I will continuously bump into one constant waiting for me where I go. 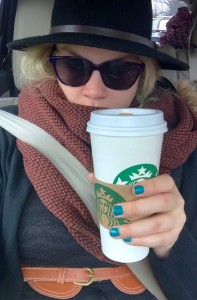 Oh Starbucks, you always know how to find me and help me get home during six-hour car rides.  Now even in Williamsburg, Brooklyn.