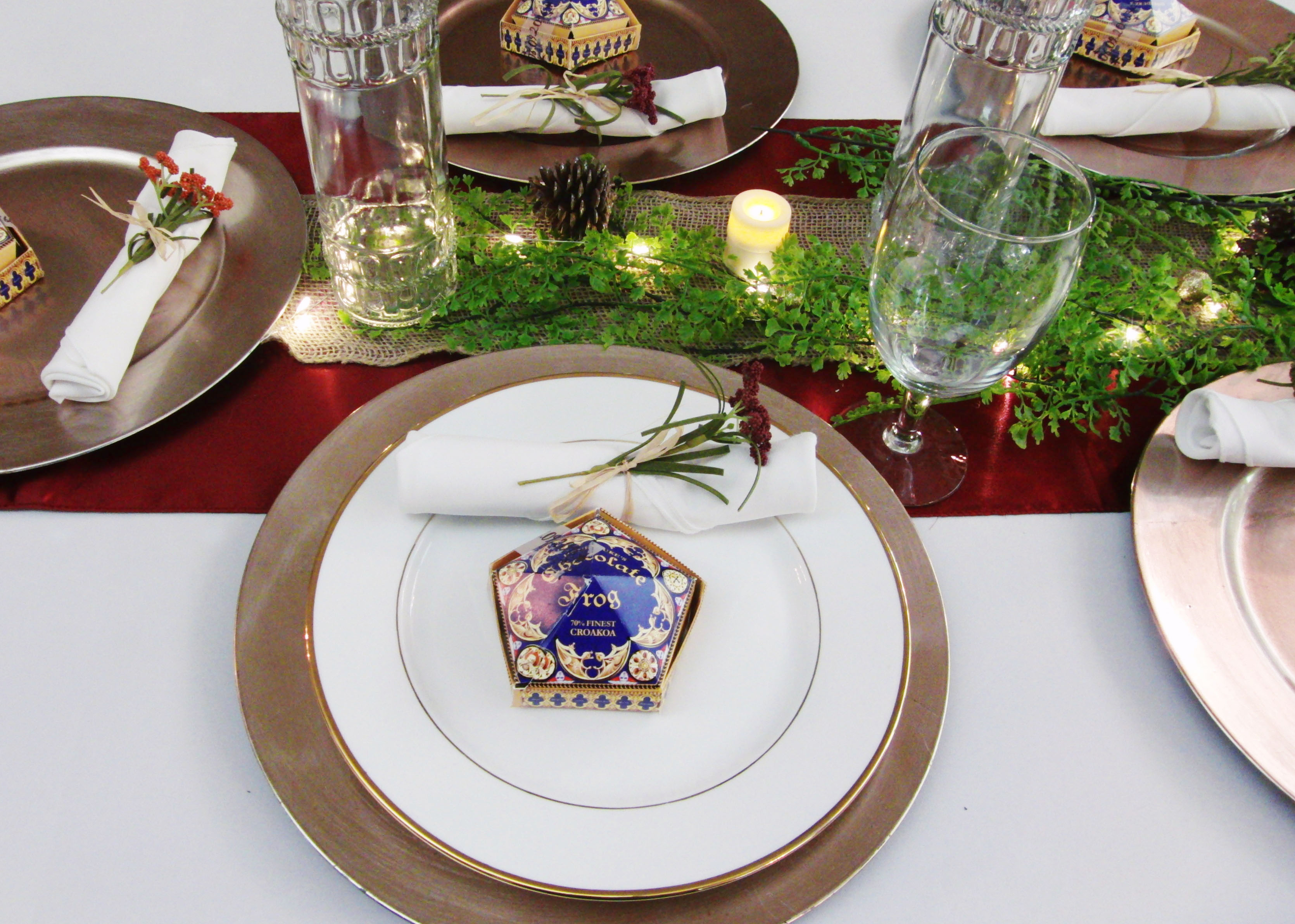 The Harry Potter Bridal Shower of Every Witch’s Dreams

I am a huge Harry Potter fan. My family members are big Harry Potter fans. My cousin, who is getting married this year, is a big Harry Potter fan – so much so that she got her fiancé into Harry Potter as well. Christmas is always so easy – harry potter gifts ideas – done. So naturally, when it came time to throw her a bridal shower, we had to make it Harry Potter themed! Whilst we managed to get the soon-to-be groom to stay away from Harry Potter-themed engagement rings, there was no getting away from Hogwarts at the Bridal shower! However, there’s a fine line between making it kiddish and/or Halloween-ish, so we needed to age and class up Harry Potter. That was an interesting task. After weeks of internet research, e-mail chains, and WhatsApp chats, we somehow got it all together! If you are a fan of Harry Potter but don’t have a bridal party to plan, then you might be interested in checking out something like this Harry Potter Airbnb. This could be a nice way to spend your weekend if you want to get away for a bit. However, if you do have a bridal party to plan for then keep on reading. Don’t forget that you need to make sure that the bride has everything else sorted before her big day. The bridal party is something that suould happen once she’s found the perfect location, the perfect dress. If you are struggling to find the perfect dress then it might be worthwhile checking out this Winnie Couture Atlanta location. Once everything is sorted, then you can plan the bridal party and give the bride something to look forward to and enjoy! 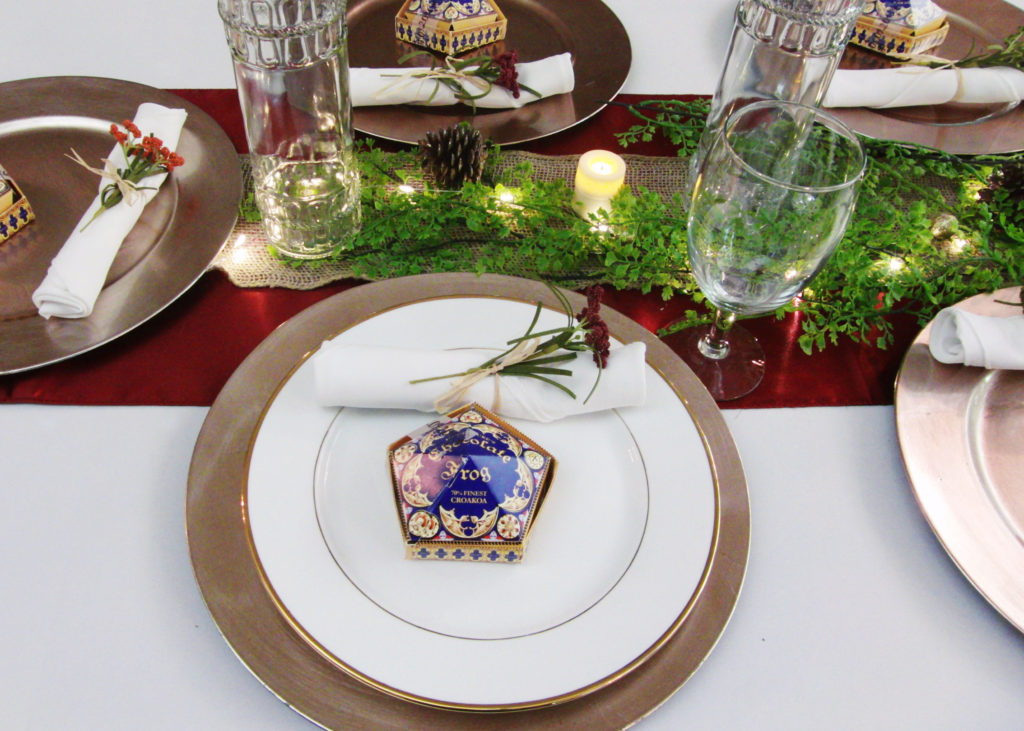 The bride mentioned that she wanted long tables – like those rustic, communal long tables where everyone sits and has a meal. She also wanted it outside. While their backyard would’ve made an amazing Forbidden Forest, we out here in 100+ degree Fresno heat, so no one was about to do to that (heh). Instead, we brought the tables inside to recreate a smaller Great Hall and had four total – one for each house! Most of the things we purchased – either on sale at Michael’s or at the dollar store – but the tables, chairs, napkins, and water goblets were rented. 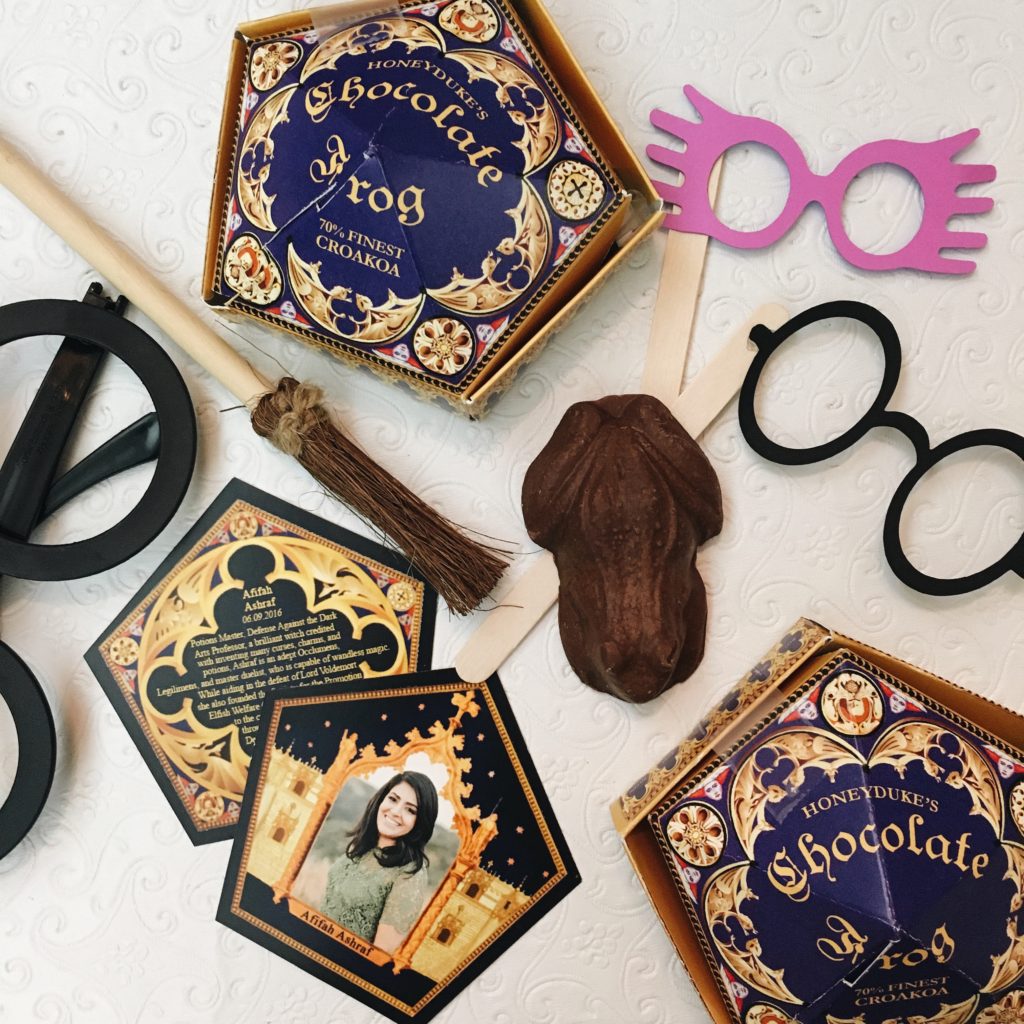 The chocolate frogs resting on top of each table setting were completely homemade! These were part of our favors for our guests. My sister and I (she did a lot of the work to be honest) configured a template for our Cricut, which cut them all out, but then we had to sit there and fold every single box (as did the rest of the planning squad). So many little tabs to glue and tape in! I found a template for a chocolate frog card that matched the ones you can buy at the park, and inserted the bride onto it. I also wrote a fun little bio on the back, which combined attributes of her favorite characters! For the actual frog, I simply purchased a frog mold from Amazon, bought Trader Joe’s Pound Plus Milk Chocolate, melted them down into the mold and cooled them. It’s so simple to make – and they tasted incredible. 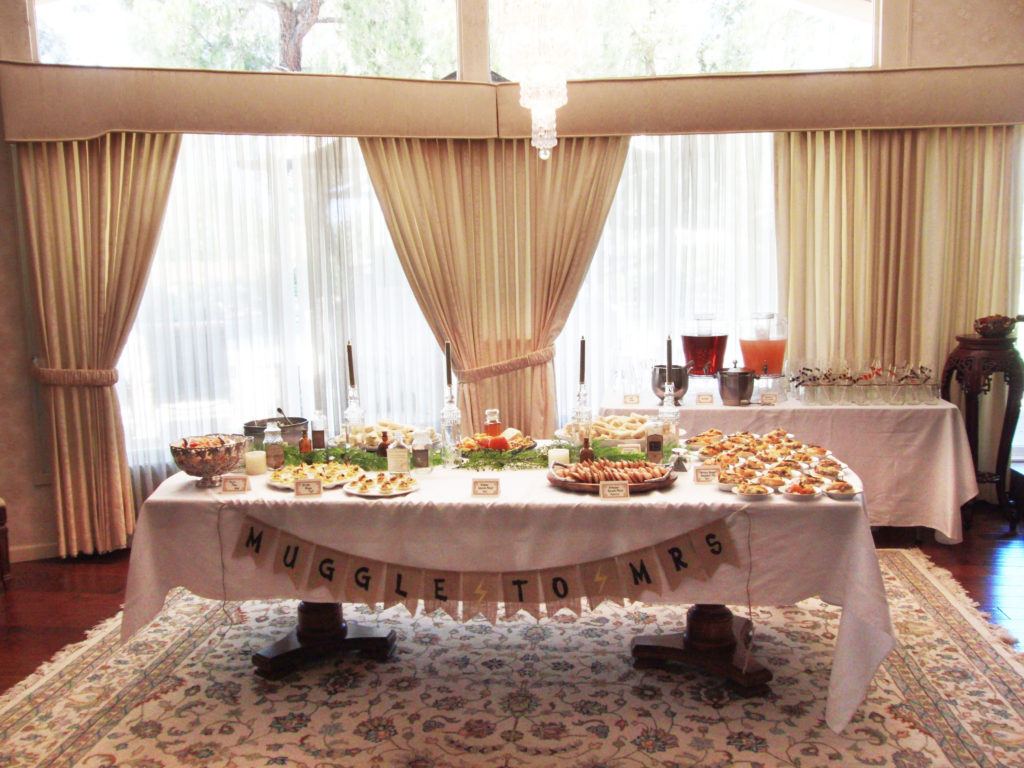 Onto everyone’s favorite part: the food. We divided the Great Hall into two separate sections. You saw the first part, with the Great Hall tables. This is the actual Great Hall feast, which greeted our guests right when they entered! The dining room had a ton of space for our plentiful spread and a great chandelier, too. The “Muggle to Mrs.” burlap banner was purchased on Etsy. 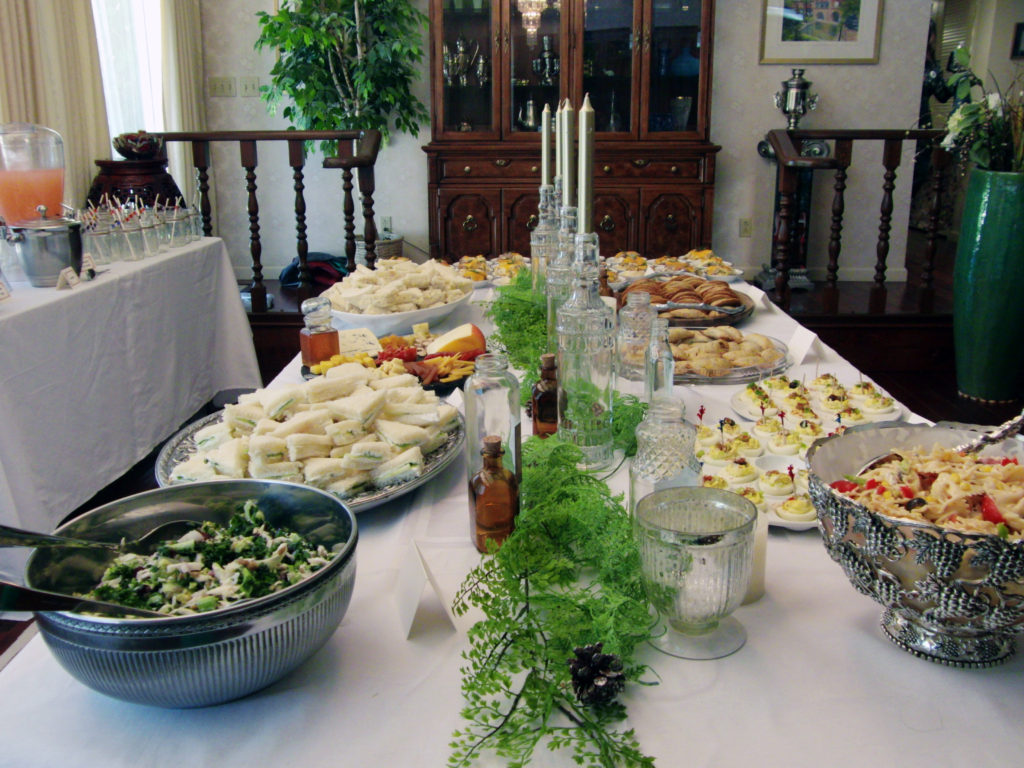 Since it was lunch time, we wanted to keep our food light and easy for our guests. Most of our food was homemade, with the exception of the salads (though that awesome kale salad was a mix we had to put together!). We had deviled “dragon” eggs, and two types of tea sandwiches (cucumber/mint and chicken salad). Each of our menu items had a fun Harry Potter related name too – such as Severus Snape’s Shepherd’s Pie! 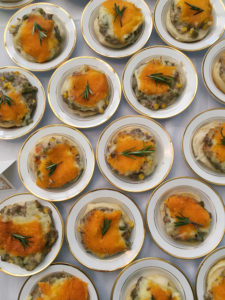 What’s British food without shepherd’s pie? We had to class it up, of course. One of our friends made a deconstructed shepherd’s pie with the biscuit, the filling, and sauce one on top of the other. Oh, and rosemary for garnish, because we’re just fancy like that.

The hand pies – better known as Cornish Pasties in the U.K. – were my specialty. After we all had them at 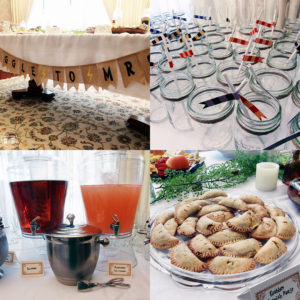 the Wizarding World of Harry Potter in Orlando, we knew we had to serve them at the bridal shower. We made a mushroom-spinach-feta one for our vegetarian guests and a jerk chicken flavor. Pasties are incredibly easy – all you need it pie dough, cut them into circles, fill them with your ingredients of choice, and bake them! The possibility are endless – both sweet and savory. Our drinks (besides Gillywater, a.k.a. regular, refreshing H2O) were Amortentia (pink lemonade) and – you guessed it – Butterbeer! I have made other recipes in the past, but the foam still was not to my liking after having multiple drinks at the parks. I think our mix of heavy cream and marshmallow cream on top of good quality cream soda was the best imitation yet! Our guests could choose whichever they liked and sip on them in mason jars with little house flags. 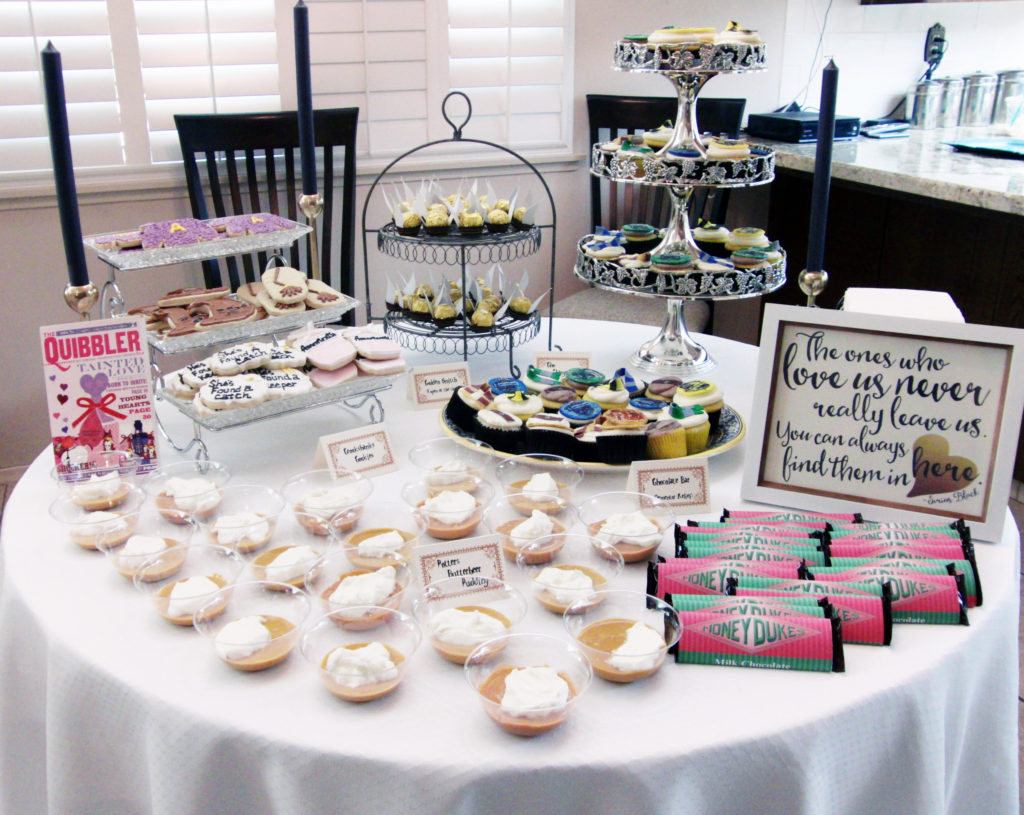 I know, you were wondering where the dessert was. Don’t worry, I gotchu. We all enjoy sweets (probably the bride’s fiancé the most – but he was, unfortunately, not in attendance), and our bride liked the idea of a dessert bar instead of a cake. And so, we fulfilled that request. We set up our Honeydukes in the breakfast nook of the kitchen, conveniently located next to the Great Hall tables. There was something for everyone – from cupcakes to cookies to butterscotch pudding! 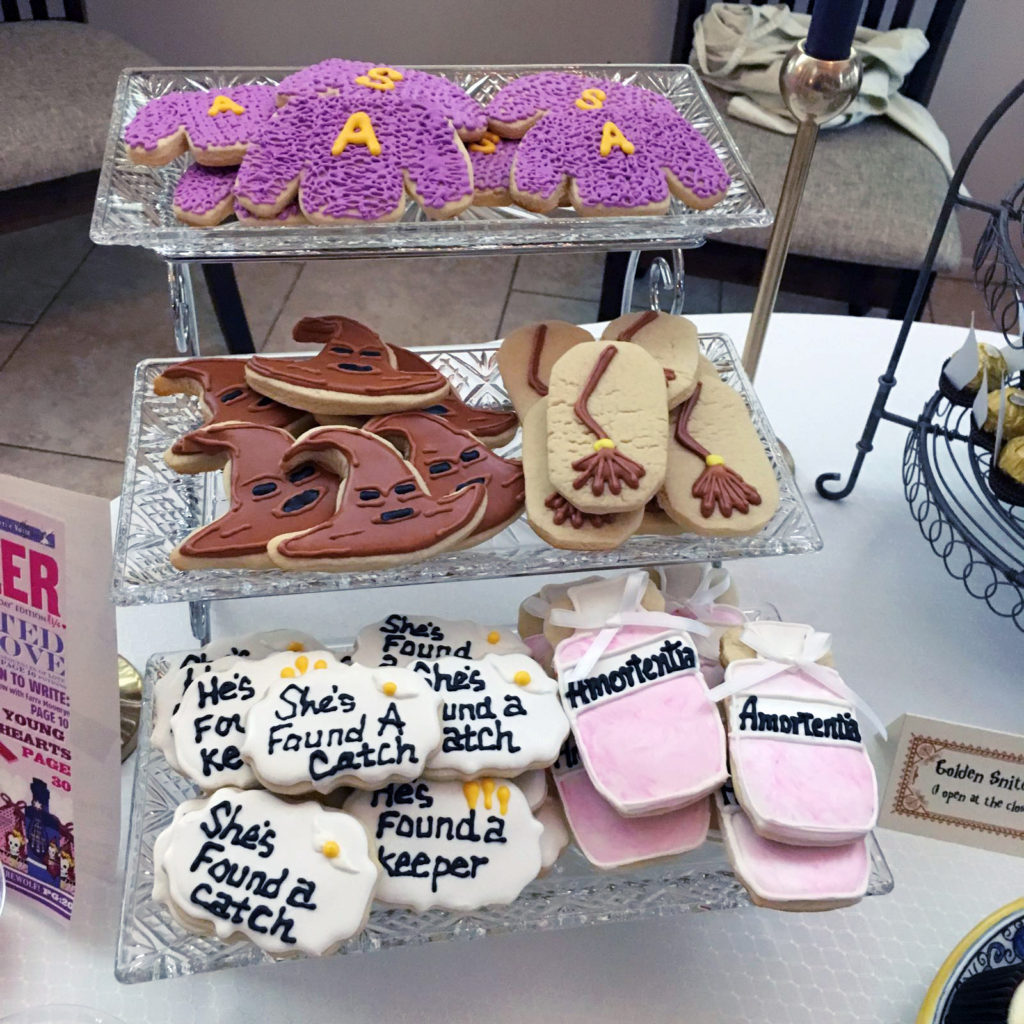 These gorgeous cookies deserved a picture on their own! Fresno bake, Gracie Bakes, did a brilliant job of executing our requests. After perusing through everyone’s party planner, Pinterest, we simply had too many ideas for cookies! The top were Weasley sweaters, with the bride and groom’s first initials, respectively. They’re both Ravenclaws, so they should’ve been blue, but I guess the purple and gold works alright since they’re from Southern California, heh. We also wanted the sorting hat and broomsticks, which were so cute! The bottom left cookies said “She’s Found a Catch” and “He’s Found a Keeper,” which are Quidditch related! And then there are Amortentia love potions next to it. They were honestly too cute to eat. Even if I did take one of each, later on. >:) 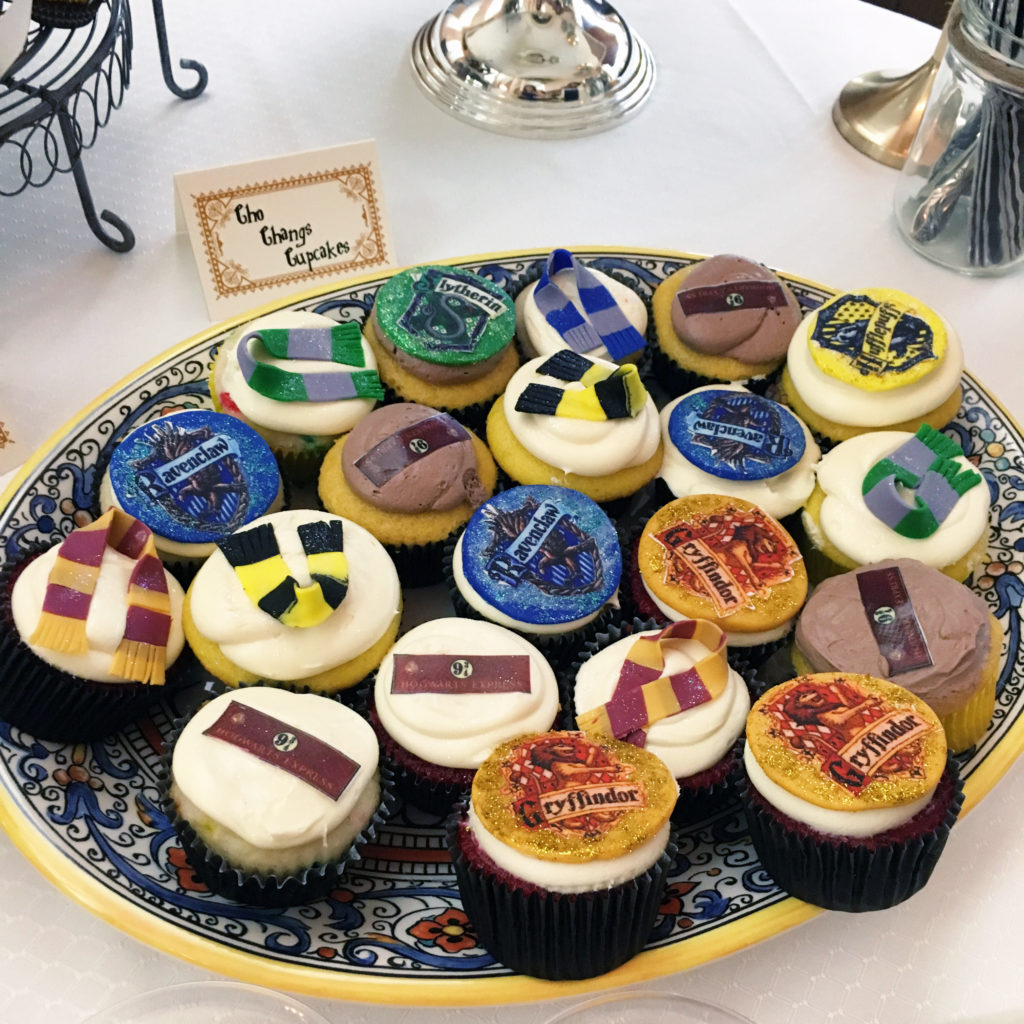 You didn’t think I forgot about the cupcakes, did you? They deserved a giant picture on their own, too. Fresno baker Bell Kitchen did an AMAZING job on these! We requested house scarves, house crests,and Platform 9 ¾ signs. She totally delivered. And to my surprise, there were several different flavors! There was vanilla funfetti, red velvet, chocolate, and lemon raspberry. Each of them had a delicious filling as well. Again, these were so pretty that it was almost difficult to eat. Almost. They were amazingly delicious. 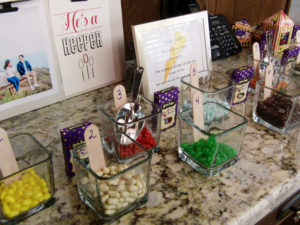 One of our games was for guests to try Bertie Bott’s Every Flavor Beans and guess the flavor. Well, I purchased the beans, so I got a little mean and made almost all of them the ugly flavors! There was earwax, dirt, Tobasco, and rotten egg, among the flavors. When I was explaining to the employees at the Bertie Bott’s store in Gilroy what our plan was, they got a kick out of it. It was priceless watching everyone’s disgusted reactions and the answers afterwards! 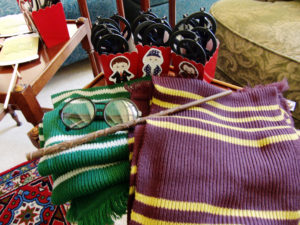 Is it even a party without a photobooth? We had a simple background with glasses, snitches, and thunderbolts. We purchased a set of photobooth props from Etsy that were bridal shower and Harry potter themed. But, I also had a bunch of Harry Potter stuff lying around my house, so we had real wands, scarves, and glasses that our guests could wear. I also brought Ron’s Weasley sweater that was incorporated into our decor.

Overall, our guests had a brilliant time at the shower! From the decor to the food to our party games, everyone was in awe of the attention of detail. Most of all, our bride to be was in love with the bridal shower! She couldn’t get enough of all of the decor and our favors. 🙂 I think we can call this a success! Mischief managed, indeed.

The Social List: Beers and Bites in Long Beach