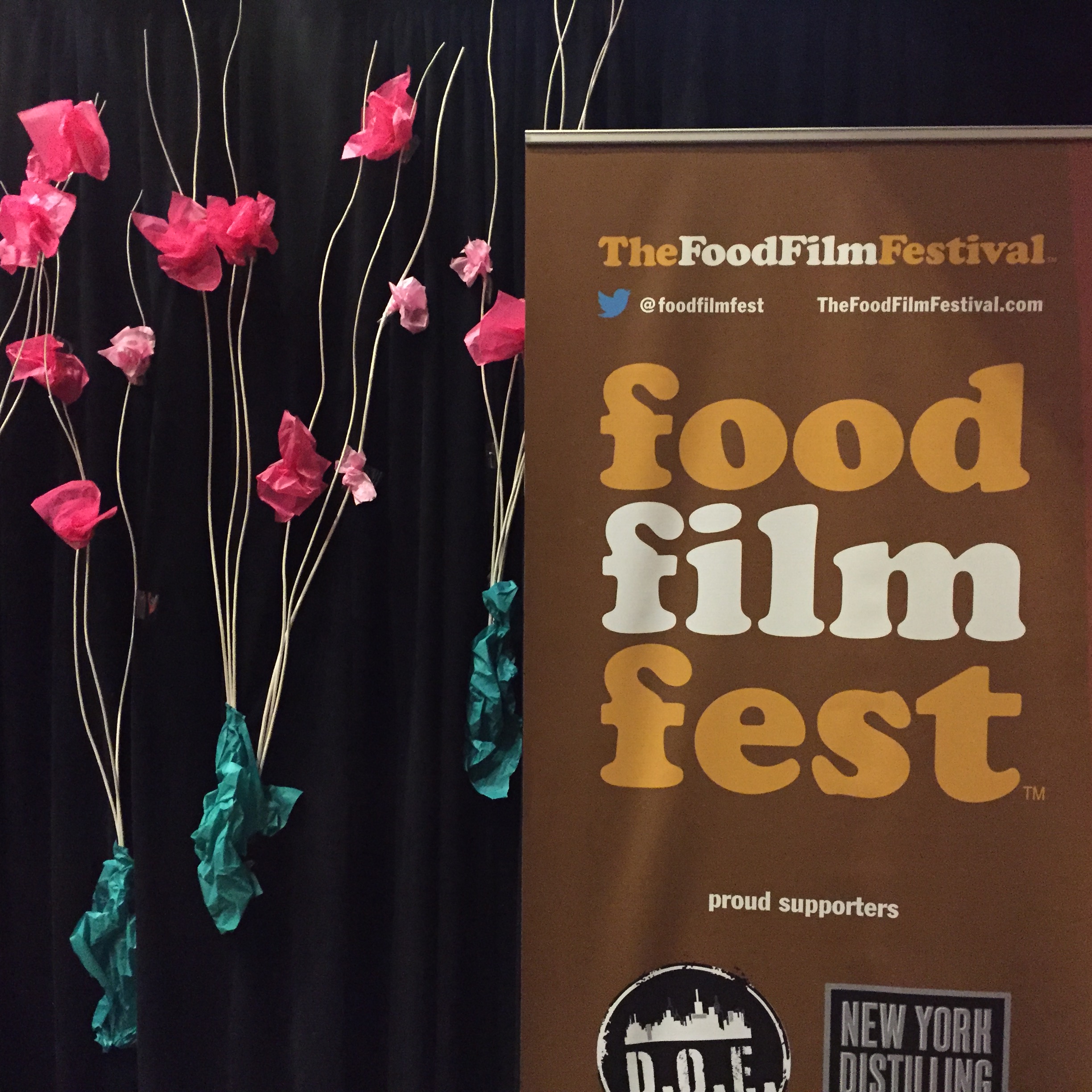 Turning Japanese at The Food Film Festival in NYC 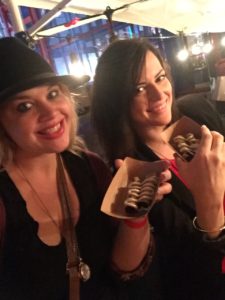 I think I’m turning Japanese; I really think so, or at least I did when I attended the Sunday, October 24th evening of the Food & Film Festival titled “Eat Japan.” I had the pleasure of discovering The Food Film Festival last year while rampantly googling-food festivals, NYC. I know you’re sitting in awe of my very elaborate process. I searched in hopes of finding some interesting places to explore and share with Girls on Food. However, finding Food & Film was like finding myself halfway through a Judy Blume novel….it just fit.

We’ve expertly crafted the side head tilt while sampling products by Lumpia Shack; Filipino-inspired cuisine. Above we are proudly holding Truffled Mushroom Lumpia. It has a crispy exterior similar to that of a spring roll nicely complimented by the flourish of truffle mayo on the top. 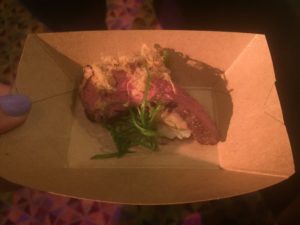 Pictured here is their Bistek and Onions Sushi, a playful elevation of a favorite Filipino dish. What I found astonishing about this dish was the mesh quality of the onion creating a different taste profile. I had the chance to chat with the chef, Neil Syham, who explained he pureed the caramelized onions at a high temperature to achieve the incredible consistency. 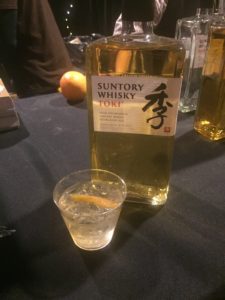 Also present was The New York Distilling Company who already had my heart with their aptly named Dorothy Parker American Gin. Men will surely make passes at girls who wear glasses after a few sips of Suntory. Allen Katz, one of their team and one of the nation’s leading experts on distilled spirits and cocktails was on hand to make his signature drink showcasing this Japanese Whiskey.

While sipping this smooth concoction, Allen explained that Japanese Whiskey with its lighter taste would sure to be a mainstay in the states over the next twenty years. 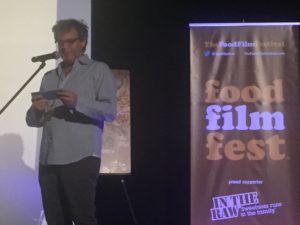 Did I mention that all of this happened in the pre-party? On to films on food! George Motz, the Emmy Award-winning filmmaker, author of Hamburger America, and founder of The Food & Film Festival kicked off the evening as its official master of ceremonies. The festival, now in its tenth year uniquely showcases food, chefs, and all the in between. 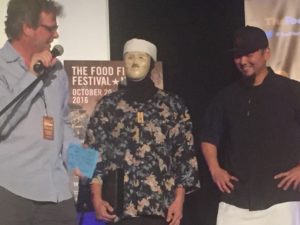 The mysterious chef who chooses to go by “Chef Nigo” rose to popularity this past summer when doing a pop-up Ramen Lab in NYC. He chooses not to disclose his identity, wearing this signature mask while he works, so that the diner can focus on the food and not on the chef behind it. 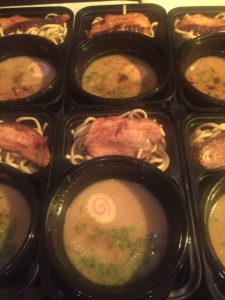 For the after party, Chef Nigo made a specialty tsukemen not served in any of his eateries. With the gravy broth mentioned in the film This is Tsukemen directed by George Motz, the dish was rich, delicate, and delicious and topped with a succulent cut of pork belly.

The winner of the evening, audience and festival selection alike was “SAKURADA” Zen Chef. It tells the story of the Japanese chef, Mr. Isuzu Sakurada who awoke to cook the best soup and became a 2-starred Michelin Chef in Kyoto. The filmmakers were on hand to accept their awards and no-you’re not hallucinating, one of them dressed in a Pikachu onesie. 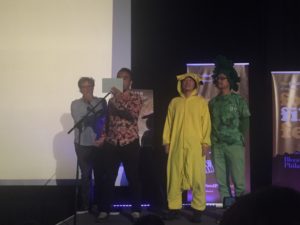 Mr. Sakurada has since closed his restaurant and keeps his recipes a secret as is customary in Japan. However, he was kind enough to call an NYC colleague and have them make us a dish. This Nama-Fu Tempura & Sake by Kajitsu was light and flavorful. 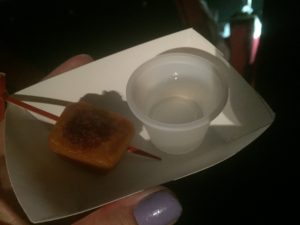 And after the films, we feast! Check out some of the food and frivolity from our adventure. 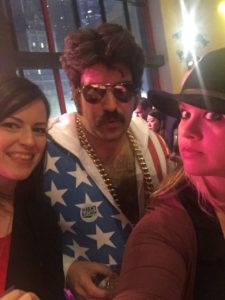 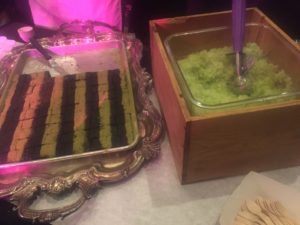 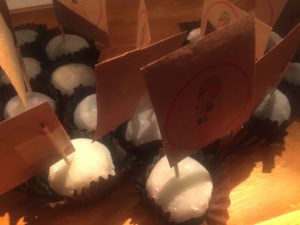 I don’t think I even began to skim the surface of the amount of mochi floating around both before and after. This rice cake made of mochigome, a short-grain japonica glutinous rice is pounded into paste and molded into the desired shape. Upon the first bite, my initial reaction was “oh, this is a Japanese gummi.” One of the films Pounding Mochi with the Fastest Mochi Maker in Japan
Dir. Great Big Story, demonstrates the manpower and ceremony with which Mochi is made. 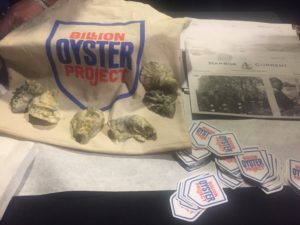 One of the events sponsors, The Billion Oyster Project geared toward restoring one billion live oysters to New York Harbor and educating about the restoration of our ecosystem brought along these gorgeous oysters to sample. A bit briny but perfect and shucked on site. 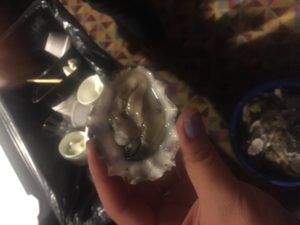 The Food & Film Festival made me laugh, almost cry, and probably gain two pounds and for all of those reasons around the end of October, New Yorkers should keep their eyes peeled for this amazingly edible event. With so many different themes and foods, it will leave you wanting for nothing. Be sure to save your gym membership.