One of the best restaurants along the K Street corridor, Mother, just celebrated its three-year anniversary… and what better way to celebrate than by bringing back the ever-popular Chef’s 10? This reservation-only 10-course vegetarian tasting menu changes each month. Last week, my date and I went to check out February’s chocolate and spice menu. We left full, and very impressed!

Once seated, they wasted no time getting down to business. Our server gave us a quick run-down of what to expect, and then we were in the accomplished hands of Chef Thiemann and his team. First up:

As wary as I was to try the lavender oil, knowing it can sometimes be a bit overpowering, this dish was one of my favorites of the night. Slightly herbaceous, slightly sweet, with a healthy portion of cheese – how could you go wrong? The crispy artichokes were also delicious, as was the dish simply described as “Thai street food.” After asking the chef what magic he had worked to make these addictive, crunchy little bites, we found out he used a product similar to tempeh, all I know is I have got to figure out how to make this at home before football starts again! It’s the perfect snack. I also know I’d like to slather seaweed butter on everything from now on – I couldn’t get enough of the salty, slightly funky spread.

Next, we moved on to the entrée-style bites:

Apparently, as the chefs were researching various types of burgers for Mother’s menu, Wikipedia led them to the Indian fast food equivalent – vada pav. This deep fried mashed potato fritter was loaded with spices and topped with a pungent chutney featuring raw garlic. We were told to expect a big punch of flavor and man, they were right! That fritter hit harder than Amanda Nunes, in the best possible way. Though I could have eaten ten more, we instead moved on to the masa dish. In addition to the tomatillo salsa, yogurt and broccolini, this dish incorporated a fungus, popular in Mexican cuisine, that grows on corn (huitlacoche). Another of my favorite dishes, I couldn’t get enough of the fontina/masa combo – and the basil leaves on top added a surprising twist.

My date loved the slider, which featured trumpet mushrooms treated like pulled pork – slow cooked, shredded, and covered in barbecue sauce. By the time we got to the agnolotti, we were slowing down, but that didn’t stop us from finishing the impossibly delicate pasta. The sweetness of the beets and apples, combined with the sharp saltiness of the Parmesan, made for an addictive bite. 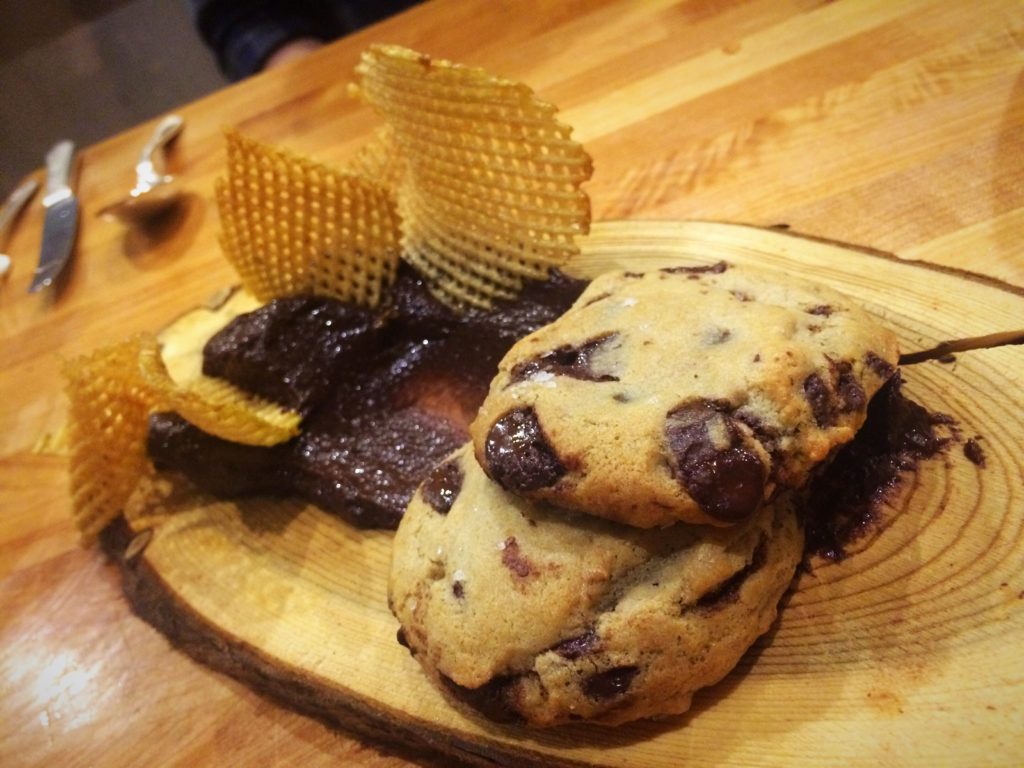 Finally, we’d made it to dessert: chocolate guacamole with potato chips and vegan chocolate chip cookies. Though I had my doubts about combining chocolate and guacamole – why mess with two great things? – consider me converted. Unsweetened chocolate combined with avocado and just barely sweetened with agave, this was creamier than the best chocolate mousse… and I could almost convince myself it was healthy! As for the cookies? You just can’t beat chocolate chip, still warm from the oven.

With excellent service and great food, it’s easy to see why Mother has enjoyed such success over the last three years. We can’t wait to go back!