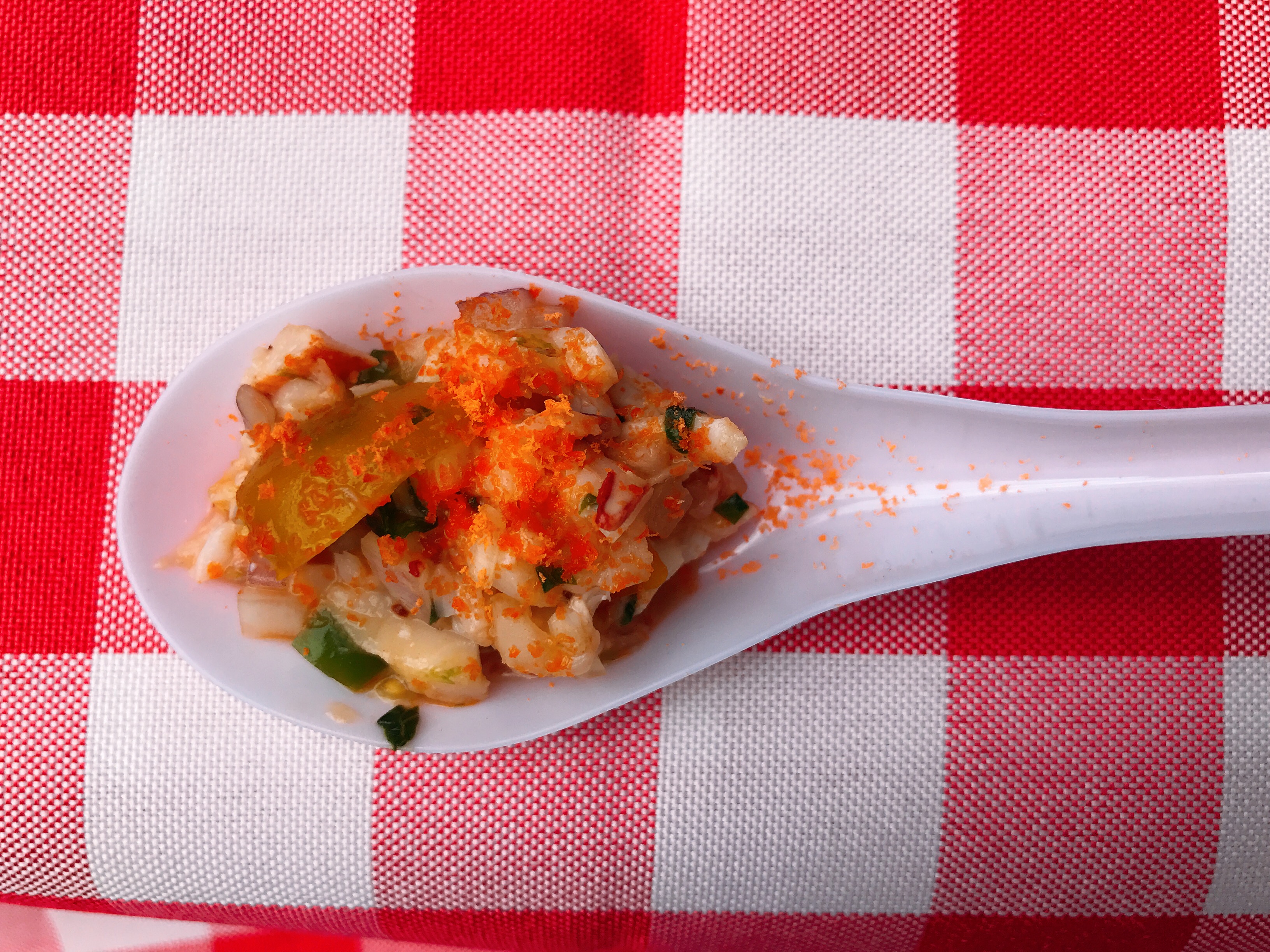 The fifth annual Music City Food + Wine Festival was held this past weekend at Bicentennial Park and it did not disappoint. In an effort to keep up with the ever-evolving culinary scene in the Music City, festival programming was expanded to include a Friday Night Grand Taste highlighting more of our local chefs and restaurateurs. One noticeable change this year was the ratio of booze to food. It was overwhelming and for many quite a challenge to remain sober. In 48 hours, I consumed no less than 10,000 calories. Clearly, I was living my best life. With more than 100 vendors at the festival, I had a hard time culling down my list of favorites. So I chose my top tasty takeaways from the festival.

One of my first stops at the Music City Food+Wine is always Barilla Pasta. Chef Yury Krasilovsky always has a spectacular pasta dish featured. It doesn’t hurt that he lives in Chicago and we have a chance to catch up on our favorite new restaurants in the city. This year Barilla brought their A game and one helluva pasta pan! Below you will see Chef Yury preparing Barilla Penne with Tomato “Passata”, Burrata Cheese and Arugula Pistachio Pesto.

Hot chicken…It’s what Nashville is known for, among other things. Hattie B’s was serving up their delicious hot chicken (and no, it wasn’t too spicy) on top of a pimento cheese grit cake. Of course, no hot chicken bite is complete without a pickle! Hattie B’s partnered with a local brewery, Bearded Iris, to pair this bite with their Homestyle or Scatterbrained Beer. I found the Homestyle to be a little less hoppy and more to my liking with this bite. 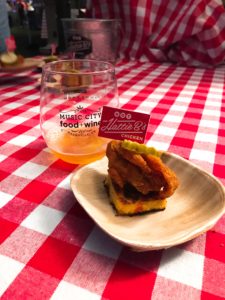 Rosé all day is my mantra. This especially holds true given all of the heat and humidity we have in Nashville. While wandering around the festival, I happened upon Withers Winery and I am forever grateful for the introduction. Withers Winery has an amazing catalog of cool climate wines from the Sonoma Coast and Sierra Foothills. I had a chance to sample several wines in their portfolio, my favorite being the Withers Rosé from El Dorado. This rosé, in particular, was light in color but filled with an abundance of apricot and peach flavors. I also had the opportunity to sample several of their Pinot Noirs and fell in love. If it wasn’t 87 degrees and 100% humidity, that would have been my next choice. Withers Winery partnered with Homarus and paired various lobster bites with their wine samplings. On Saturday afternoon, Homarus created a bright and refreshing Lobster Ceviche that paired perfectly with the rosé. Haven’t heard of Homarus? I hadn’t either, but they quickly grabbed my attention with that wonderful bite. Homarus works with Maine fisherman to deliver some of the freshest lobster to their customers within 24 hours. Honestly, it was some of the best lobster that I ever had at the show. I may or may not have gone back for seconds. 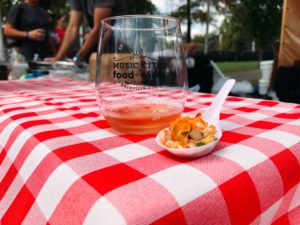 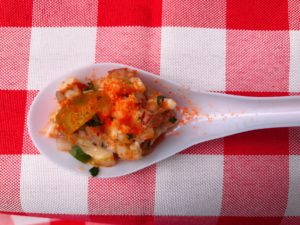 As I made my way through the Grand Tasting Tent, I popped by and checked out Henley, who is new to the Nashville restaurant scene. I was curious as to what Chef RJ Cooper had prepared for MCFW as I had dinner at Henley a few weeks ago and had a wonderful experience. Looks can often be deceiving. As I looked at this dish, I thought, “Really? This looks like a bunch of seeds.” This my friends was one of the most decadent bites of the evening. Below you will find Pumpkin Seed Risotto served with Black Truffle, Pumpkin Milk and Sourdough Lace. I think the folks at the table enjoyed my facial expression as my eyes rolled back in my head and I groaned audibly. When I think of risotto, I think of the typical creamy, dense rice dish that you often find in restaurants. However, I applaud Chef Cooper and his twist on this traditional Italian dish. 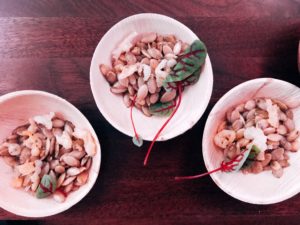 Music City Food+Wine would not be complete without a stop by Martin’s BBQ Joint and Friends. Pitmaster Pat Martin serves up some of the finest bbq this side of the Mississippi and there was no way I was passing this up. You never know what you’re going to see roasting over an open fire if he’s in charge. 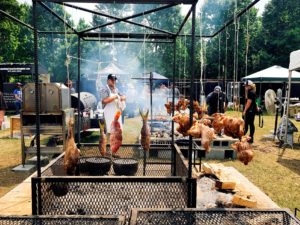 My timing was perfect as they had just finished roasting a whole hog, which was prepared by Zach Parker from Scott’s Parker’s BBQ of Lexington, Tennessee. In addition to the delectable pork sliders, they also had some sausage and sauerkraut available. I grabbed a refill of my Withers Rosé and had a seat so I could enjoy this feast. Tender and flavorful. I don’t know how those guys do it, but hey have some mad skills. 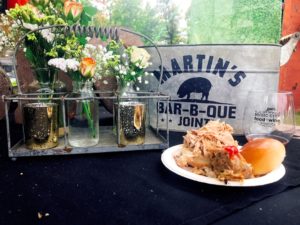 Just as I was making my way from the table, I noticed someone back in the thick of the smoke and heat taste testing right off the spit. Who was that with those round glasses? None other than Chef Andrew Zimmern. He and Pat were having extensive conversations about the low and slow cooking methodology while sampling some of the various proteins. 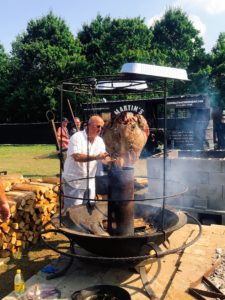 Keeping with the rosé theme of the day, I popped over to the White Girl Rosé and tried some of the Babe Rosé with bubbles. It was my only weapon to beat the heat. The effervescence gave me that much needed pick me up to propel me through the sea of people swarming about in the tents. I will be adding this little gem to the list. Not only is it tasty, but it’s super affordable coming in at $15.99 for a four-pack. You may feel basic AF, but rest assured you will have a smile on your face! 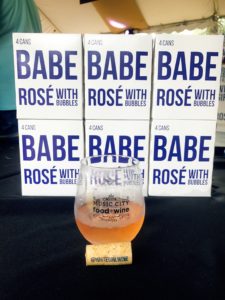 I’ve been snacking on Christie Cookies since I was a little girl. So it’s no surprise that one of my favorite sweet treats of the festival was the Nashville Hot Ice Cream Sandwich provided by Christie Cookie. If you’re a local Nashvillian, perhaps you have seen the Nashville Hot Cookie at Hattie B’s (it’s the only place where you can procure this flavor). All I can say- love at first bite! I enjoyed the spiciness of the cayenne pepper and how it paired perfectly with the cocoa and cinnamon. By far one of my favorite sweet treats of the weekend. 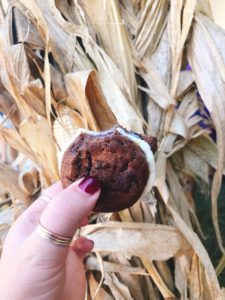 Sinema Restaurant and Bar brought their A game this year preparing Ricotta Agnolotti. This dish had me like WHOA. Topped with sun-dried tomato beurre monte, chive, parmesan, fried capers and roasted king trumpet mushrooms. The flavors complimented the flavorful pasta bite perfectly. Even though you won’t find this on their traditional menu, perhaps the fanfare from the festival-goers will demand it have a permanent home on the menu. 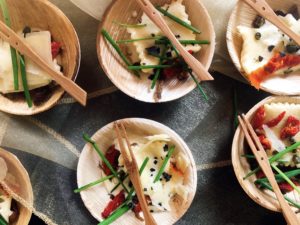 As the afternoon came to a close and the infamous dance party started, I didn’t know how I had any room left to take on Harvest Night which is one of my favorite parts of MCFW. There’s nothing a couple of espresso shots and a quick shower can’t cure…am I right?

As I made my way around the tasting tents checking out the dishes, Susan Feniger’s caught my eye partly because there were so many ingredients. With my curiosity piqued, I took a chance and stood in line with the masses. Typically, you can tell who has the “best” dish of the night based on how long the line is. Susan prepared a boneless baby back rib taco with cumin honey glaze and pineapple-jicama slaw, grilled corn esquite with chipotle crema and cheese border guacamole. From looking at the photo, there’s zero evidence of a taco shell. While I watched others attempt to pick this up as a bite, I opted to attack mine with cutlery as it would have inevitably ended up on the front of my dress. My only wish is that they provided us with proper cutlery, like this Nella Cutlery instead, as it would have made the whole eating process much easier. Restuarant style cutlery and equipment at a takeaway service should definitely be considered. But rest assured, the messiness of the dish did not deter Harvest Night patrons. Chef Feniger had a line at her tent most of the evening. 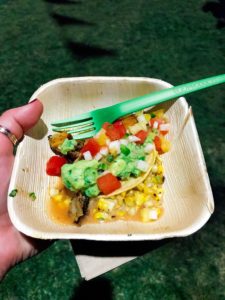 From the meat tossing at Tim Love’s Chop Shop Demo, the crowds of people gathered around the Pappy Hour or chatting with Andrew Zimmern about where I should dine in Venice; Music City Food + Wine was worth every calorie and Advil consumed. Dates for the 2018 festival have been announced here. Make sure you save the date and start banking your calories!