A place renowned for biscuits? You sold me. This past July I went to New Orleans for a bachelorette weekend – and ate (and sweat) a lot. Sure we did a lot of sightseeing as well, but when you’re going to the South, you better eat all you can, especially in a foodie mecca like NOLA. We started our adventure at Willa Jean for brunch. 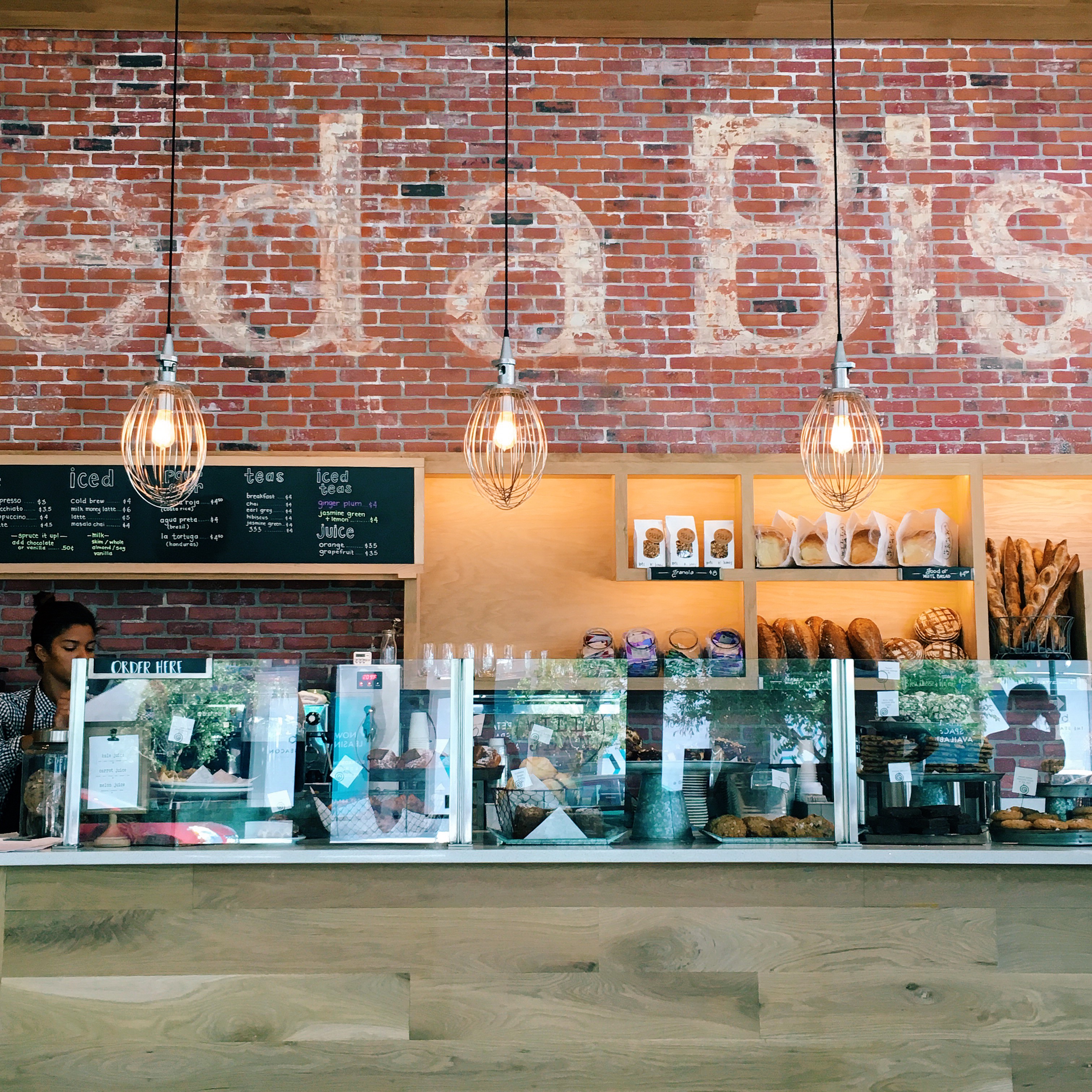 Willa Jean was at the top of my list after seeing it on several travel and food sites, and I was not disappointed by my decision. The front of the shop has a bunch of baked goods that you can pick up or order at your table. The specials rotate each day, so there’s always something new, such as these glorious Nutella buns. 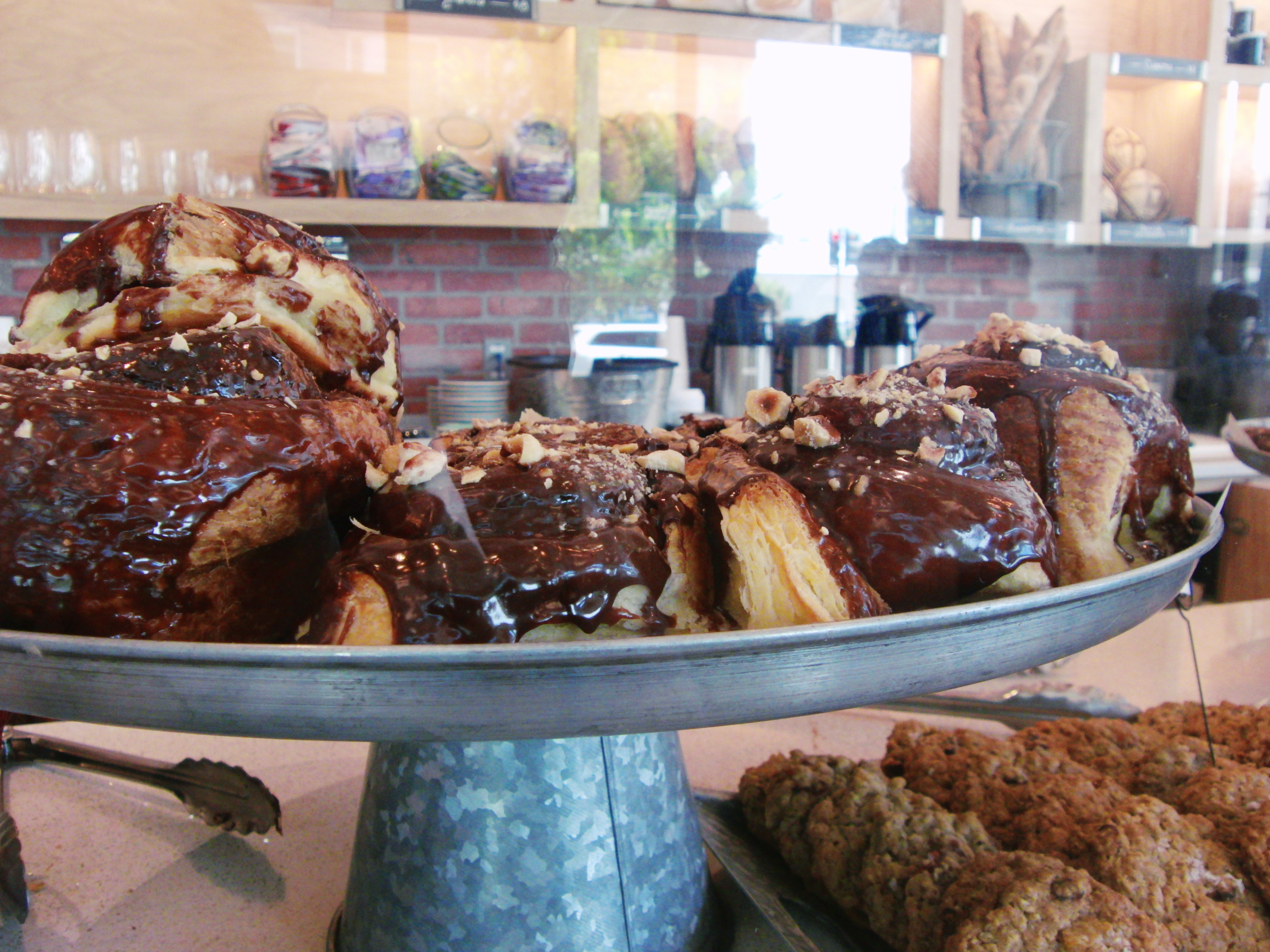 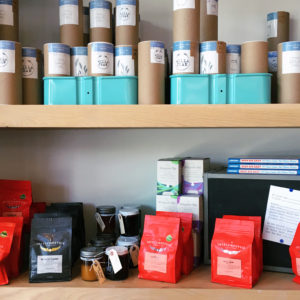 We made a brunch reservation for late Friday morning, right at the tail end of their brunch me 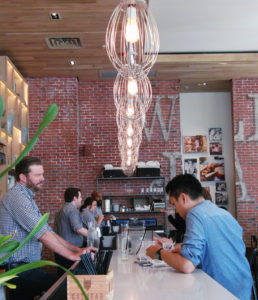 nu – though they have lunch and dinner as well. We were a large group, but luckily it wasn’t terribly busy so it was nice to have our section of the restaurant to ourselves. Along with their bakery specials, Willa Jean serves a special blend of Intellgentsia Coffee. And of course, because it’s New Orleans, they have a bar and dranks – like frosé y’all! The service is really friendly, which I truly think is Southern hospitality. It’s not a stereotype, you guys. 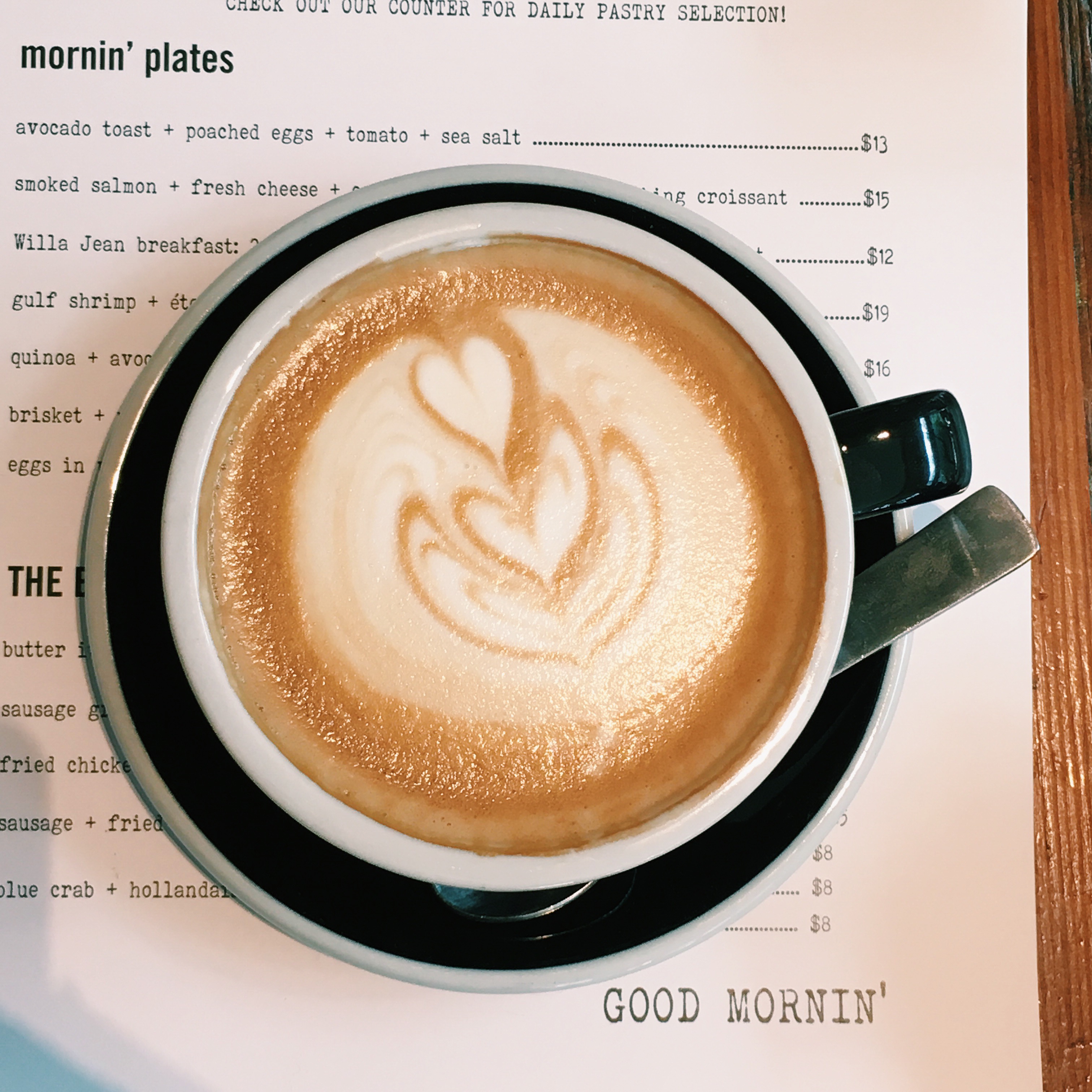 I started out with a simple latte, even though it was disgustingly muggy and hot outside. I like that cozy feeling of drinking something warm out of a mug. I also needed a pick me up after catching a flight straight after work and only getting three hours of sleep. Their Intellgentsia blend is really smooth and I liked that it wasn’t very bitter. But then, I also like my coffee with a lot of milk (or half and half) and a splash of coffee, heh. 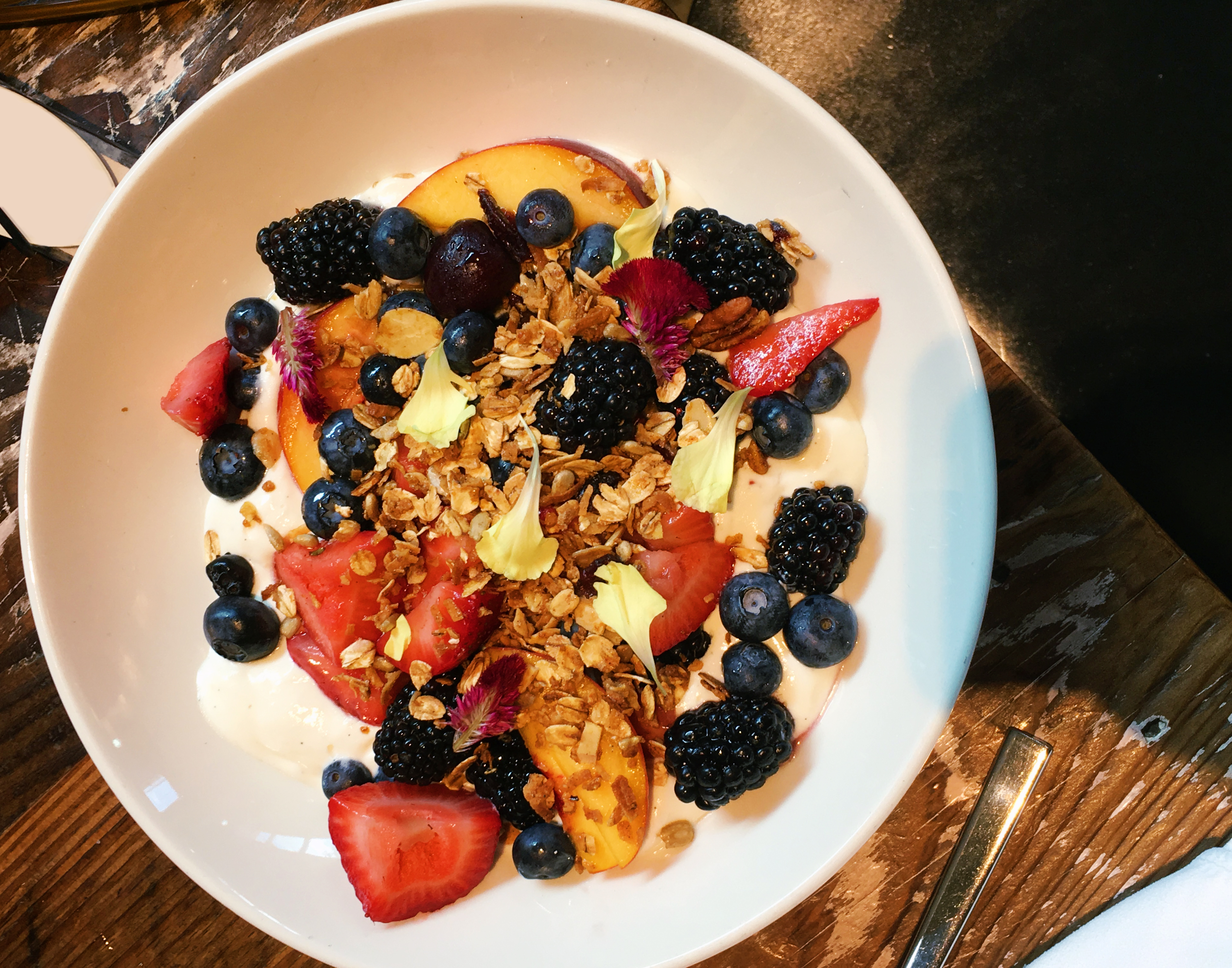 This is one of their morning snacks: summer berries, cream, granola, and elderflowers. Doesn’t it look (almost) too pretty to eat? This felt like the epitome of summer with the colorful flowers. The cream was fresh, thick, and creamy. I think that makes all the difference with granola! 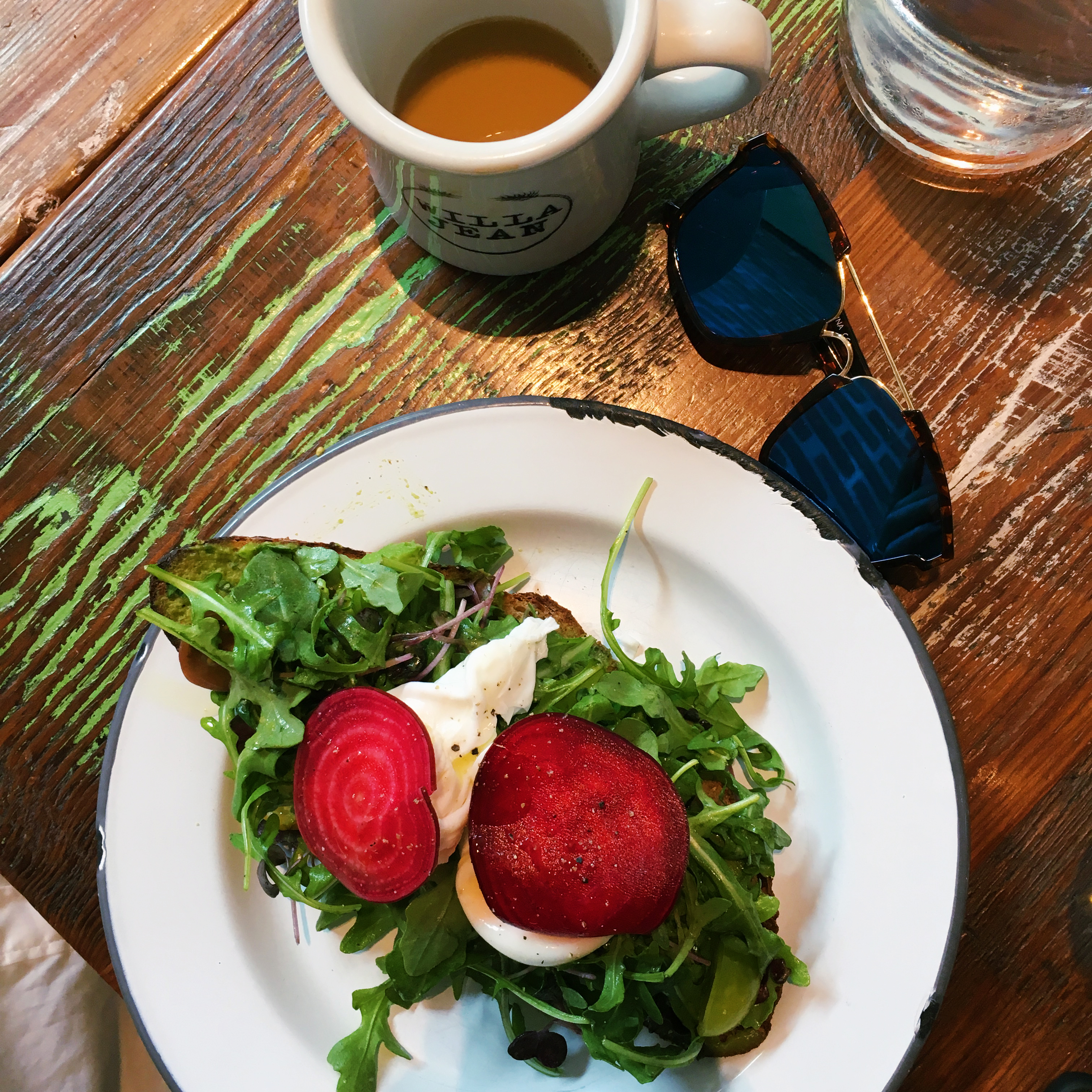 Their avocado toast is next level. It was honestly delicious – and it was the toast that made it, in my opinion. I believe they make it in house, judging from the bread on display at the front of the store. This one had poached eggs, avocado, arugula, beets, and sea salt. It was a great balance of salty, bitter, and creamy. 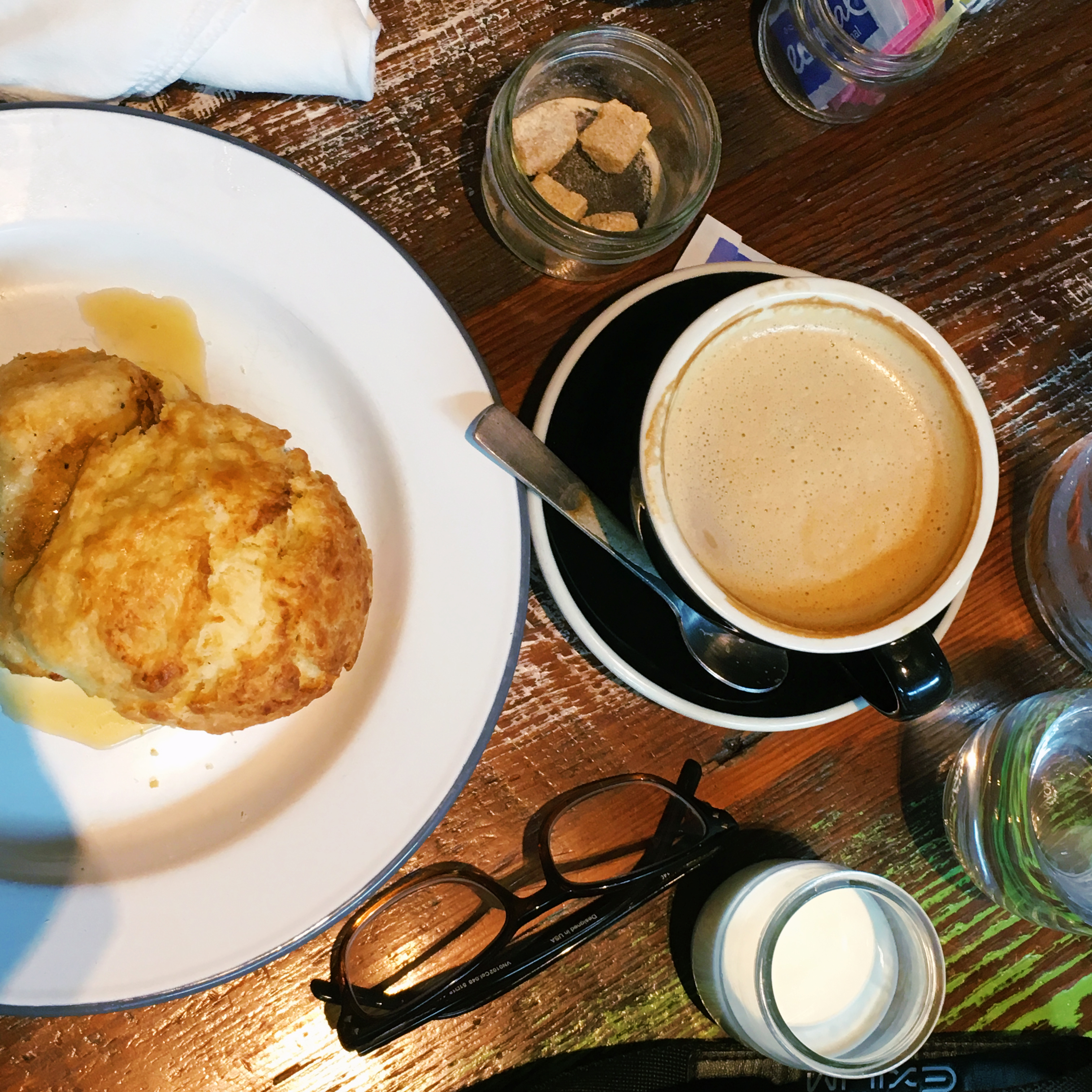 Now, onto the main reason I came to Willa Jean. I got biscuits with fried chicken and Tabasco honey. I wish my picture displayed this a little better, but underneath the giant biscuit, drizzled (more like drenched) with Tabasco honey, was a giant piece of fried chicken. It was lit, you guys. The fried chicken was juicy and tender, the biscuits were thick and fluffy, and it was harmonious with the heat of the Tabasco and the sweetness of the honey. Such balance. 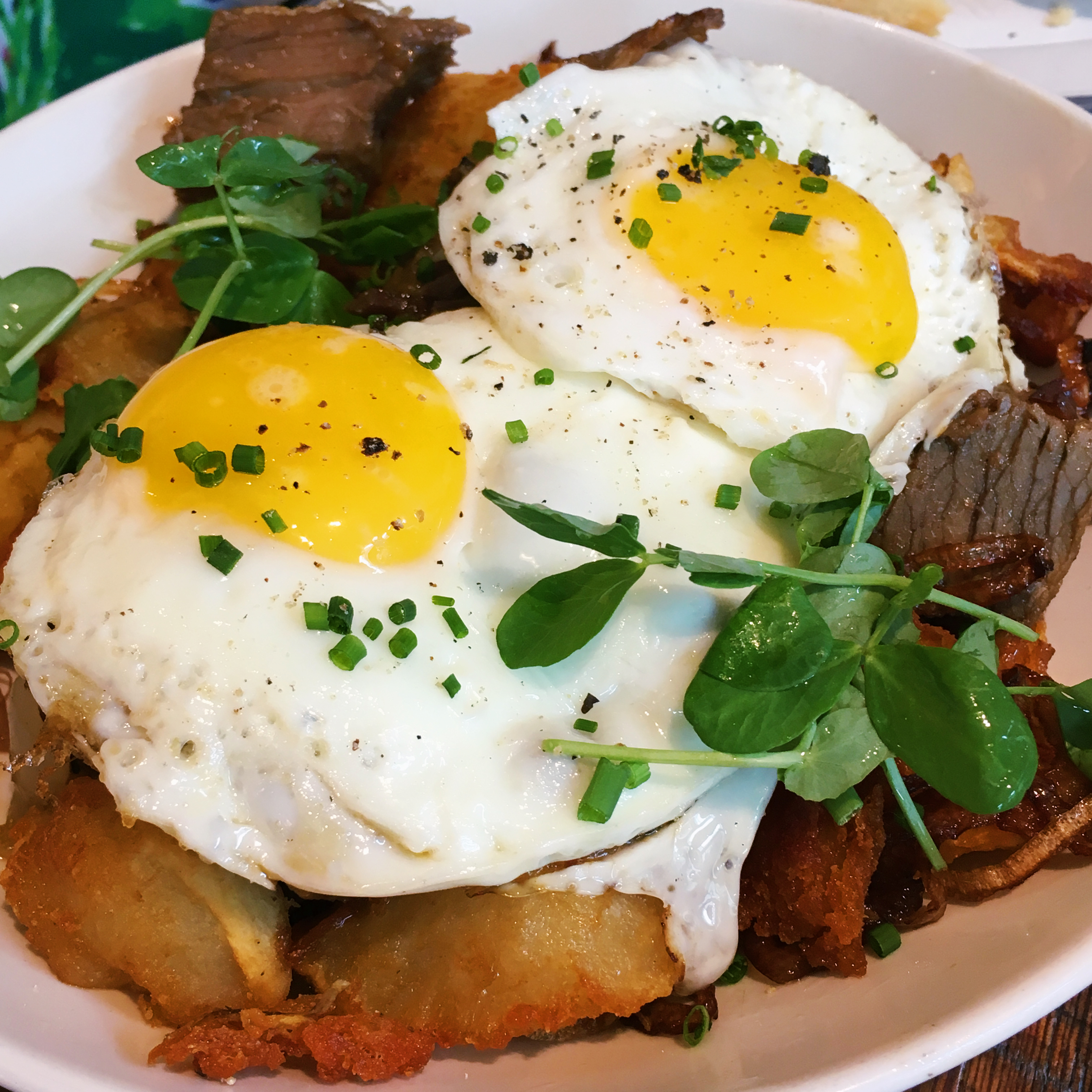 And finally, there was the brisket, potatoes, cipollini onions, and fried eggs. New Orleans knows how to do brisket – it was sliced perfectly, while being tender and flavorful. The potatoes were also really good – I really don’t know how you can mess up potatoes though. There was also a side of cheesy grits, though my picture didn’t turn out great. It was my first time having real grits, and what better place than in the South? It’s pretty good – I love the creaminess of it since I’m a fan of creamy oatmeal. I don’t think I could’ve eaten the large bowl that it was portioned into since the taste became a lot for me between the cheese and corn. Perhaps it’s an acquired taste?

I’m honestly in love with the interior of Willa Jean. From their brick walls to their whisk light fixtures, I want every bit of it. I think this is the perfect place to sink into the eclectic Southern vibe of New Orleans and have a comforting meal before walking through the streets of the city. 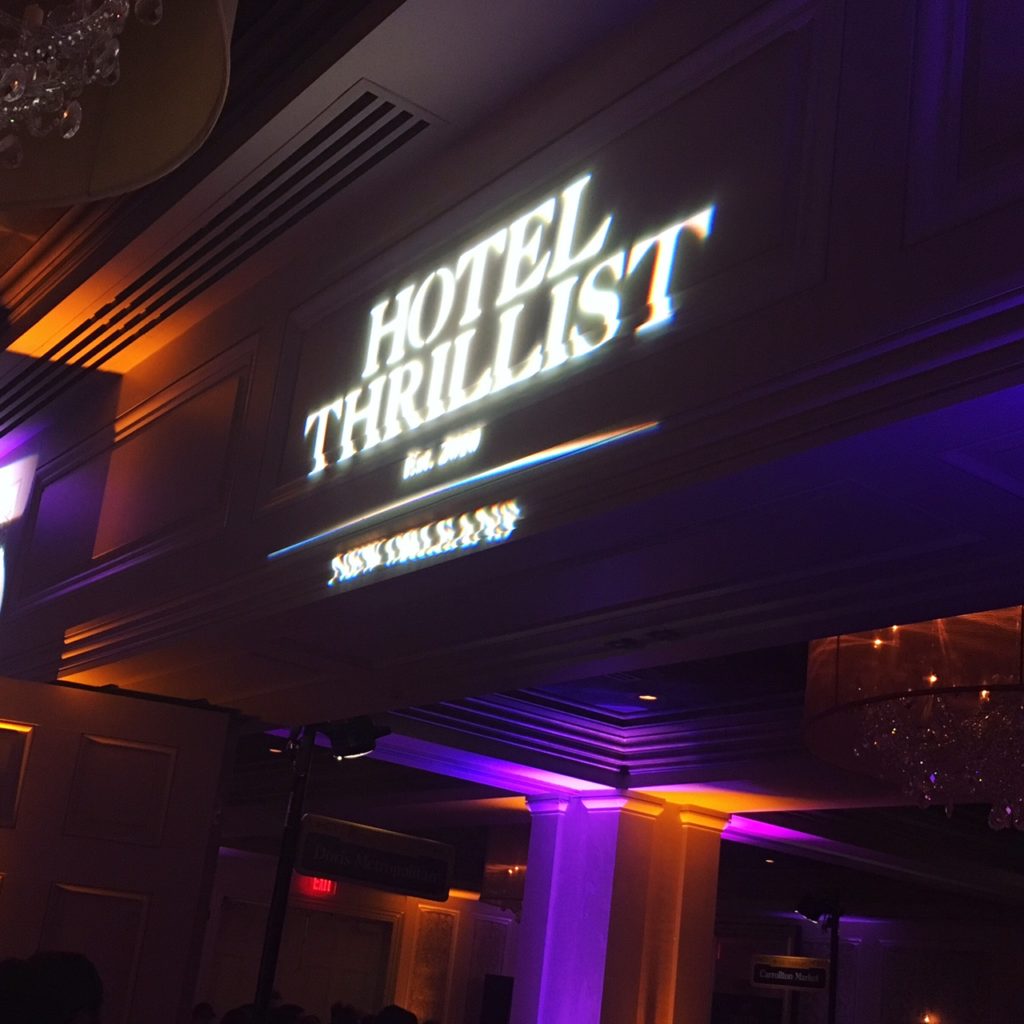 New Orleans is a city like no other. Part raucous party, part historical gem, it is no surprise the lifestyle media powerhouse Thrillist  chose this locale for their sixth “Hotel Thrillist”: a weekend of the best food, drink and entertainment the selected American city has to offer. Thrillist decamped from New York this past weekend, took over the illustrious Royal Sonesta Hotel on Bourbon Street, and enlisted the renowned Cajun/Creole chef, John Folse, (of Restaurant R’evolution and the Encyclopedia of Cajun & Creole Cuisine fame) to kick off the weekend with a party to beat the band.  END_OF_DOCUMENT_TOKEN_TO_BE_REPLACED

I recently got to visit New Orleans for the second time and of course the food there is something to love… Rich, often fried, and a fantastic drinking companion, the food you can get in New Orleans speaks to the combination of cultures in the area. Here a few of the spots I tried during my trip.

NOLA Poboys at 908 Bourbon St. in the French Quarter is close to Lafitte’s Blacksmith shop and open late. Just look at that extensive menu! The food was so good that we found ourselves back there for a second round. The etouffe and gumbo were deemed some of the best we tried. They aren’t messing around with portion sizes either, the 16″ poboys are more than enough for 2 people. I didn’t love every poboy that we tried but I will vouch for the “Who Dat” which is fried shrimp or oyster smothered in bisque. You must try  the etouffe, gumbo, and boudin balls (fried sausage and rice balls). 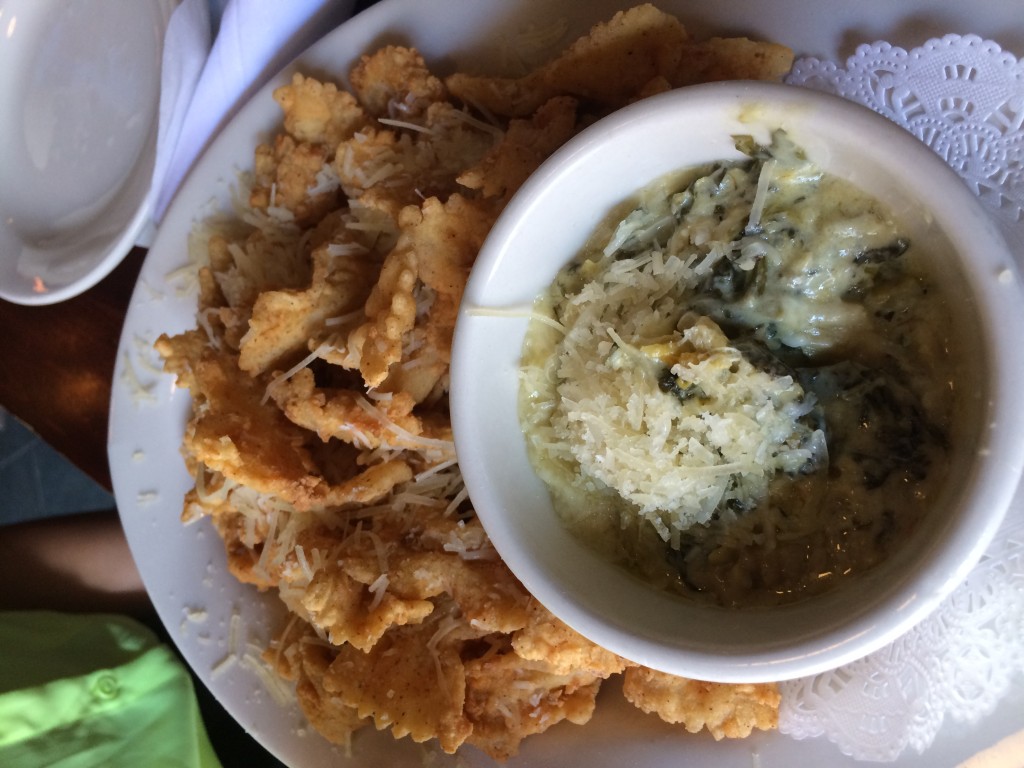 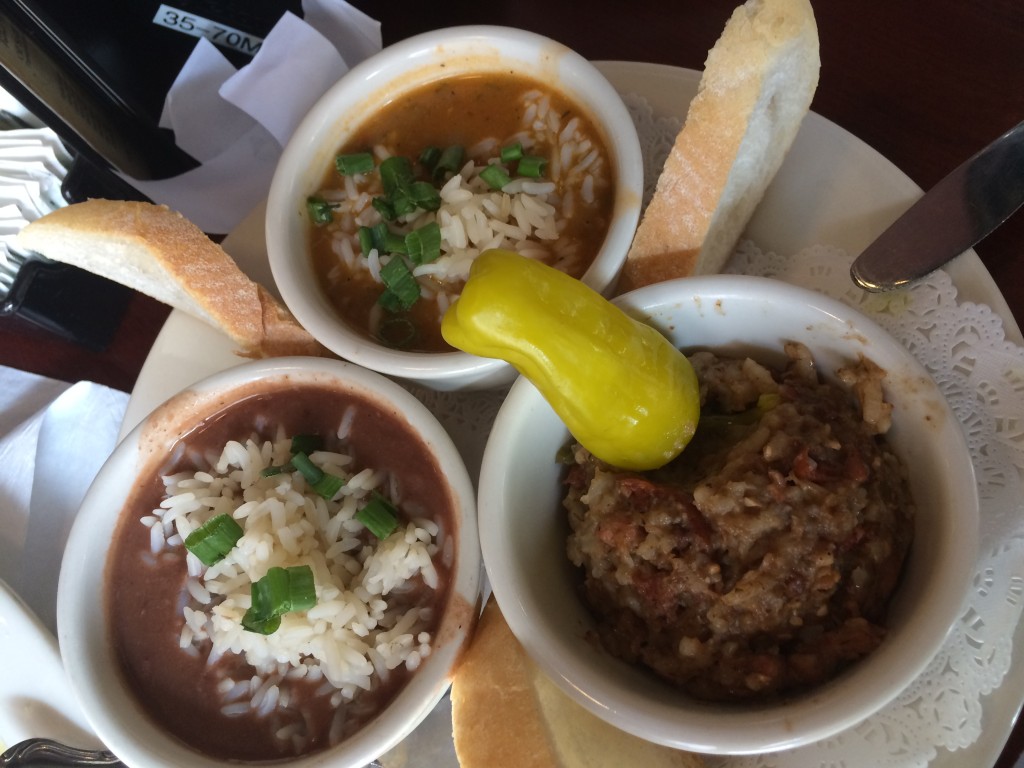 Chartres House is close to Jackson square at 601 Chartres St. and a nice little spot with options to sit on their upstairs balcony and watch the foot traffic. (New Orleans is fantastic people watching, I recommend hanging out on a few balconies.) We tried the spinach artichoke dip that was served with crispy bowtie pasta instead of chips, an idea I never would have come up with but thoroughly enjoyed. We also had to have a sampler plate with the red beans and rice, jambalaya, and chicken and andouille gumbo each of which were fantastic! 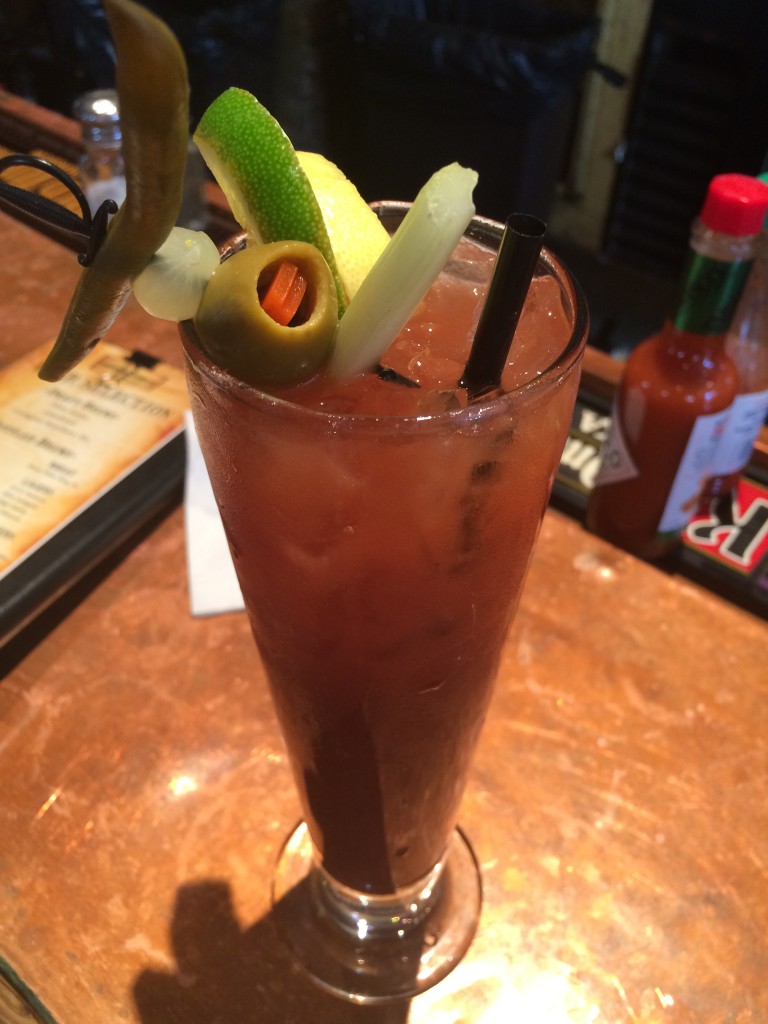 The Original Pierre Masperos at 440 Chartres St. was one of our day drinking pit stops where we tried their Cajun bloody mary. Made with house infused vodka it packed a punch and the bar provided a nice respite from the outside hubub. Our bartender was fantastic, great hospitality here! Take in some history as you enjoy your cocktail as this is also one of the oldest buildings in the French Quarter. In it’s early days as a coffee exchange it was the meeting place of men such as Andrew Jackson and Jean and Pierre Lafitte. 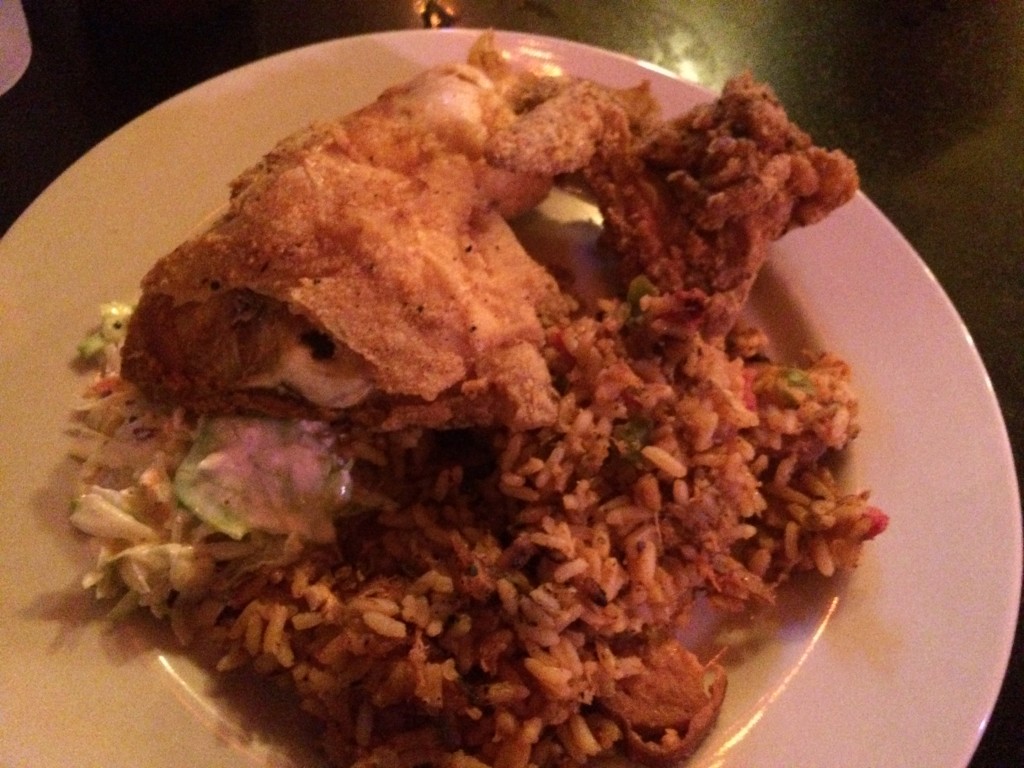 Expect to wait for a table at Coop’s Place located at 1109 Decatur St. The fried chicken here is fantastic and also comes with a side of their super tasty jambalaya and coleslaw. The other bonus to Coop’s is if you come here on a slower night (our first visit was a Thursday) you get a lot of local color. 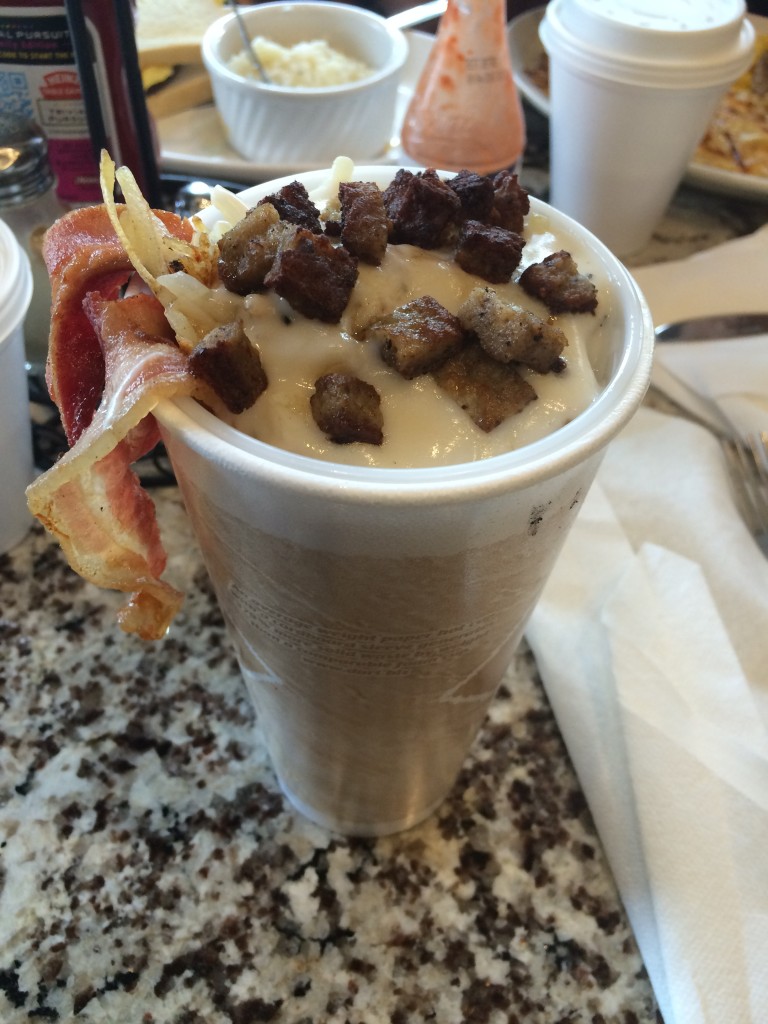 Cafe Envie and Espresso Bar is part breakfast place and part cafe on the edge of the French Quarter near the Marigny at 1241 Decatur St. You can get your latte, pastries, a full breakfast or just op for this breakfast in a to go cup. Sausage, bacon, hash browns, eggs, and grits all in a convenient Styrofoam cup make for the perfect portable hang over meal. 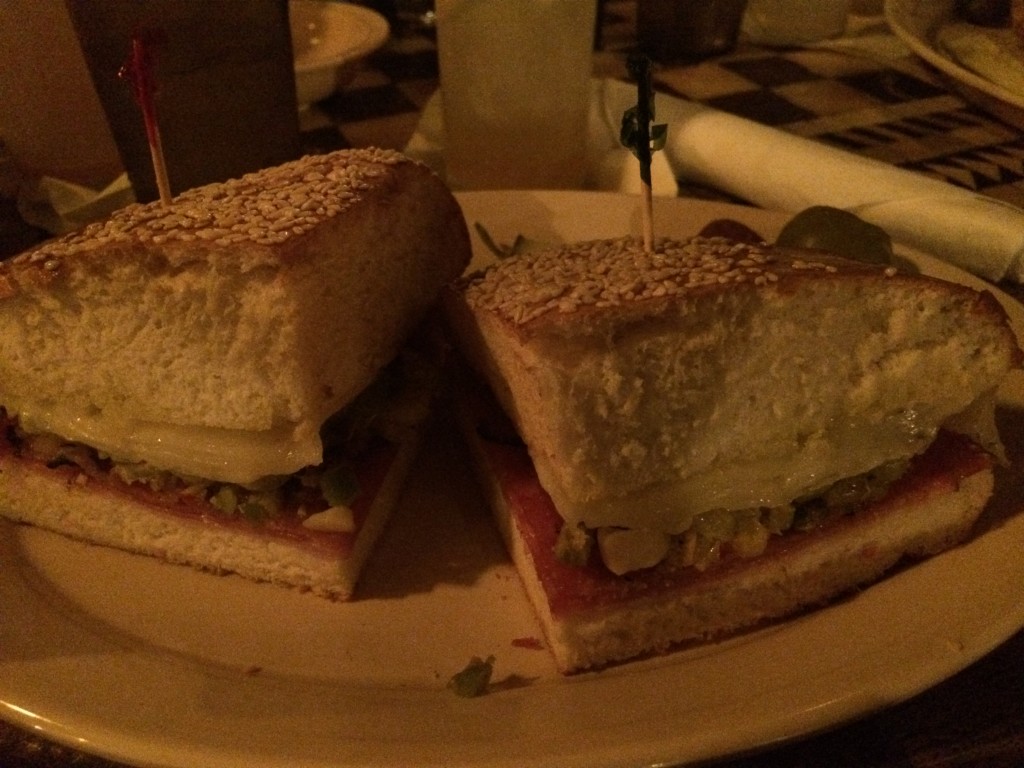 My one regret is that we didn’t get back to Napolean House for a second meal. Located at 500 Chartres St. they serve up Pimm’s cups and NOLA food favorites. Their muffaletta was one of the best things I had the entire trip and even beat out some of the other muffaletta I had. The muffaletta sandwich was conceived in New Orleans by Sicilian immigrants and the name comes from the bread of the same name. Our group also gave rave reviews to Napolean House’s red beans and rice and the duck poboy.

This is only a small selection of the fabulous food we tried in New Orleans and an even smaller look at all that is available there. I look forward to trying more places in future trips and traveling further beyond the French Quarter! What is your favorite place in New Orleans that I should try next time?

Prior to my trip to New Orleans, I was excited for one thing and one thing only: the food. I’m a big fan of gumbo, jambalaya, and beignets. However, what I found is that New Orleans has a large array of other items as well. Located in the Warehouse District is a very well known restaurant called Cochon, which specializes in pork dishes.

Its lesser known but equally delicious counterpart is Butcher. Located just around the corner from Cochon, Butcher serves up fast sandwiches and sausage dishes. It also offers an array of cured meats for sale.

During my visit, I tried the Cajun Pork Dog on a pretzel bun. The dish consisted of a pork sausage, chili, cabbage, spicy mustard and pickles.

The sausage itself was incredible. It was very juicy and had a great overall taste. It did not contain many spices but instead acted as the anchor for the dish.

While the sausage grounded the dish, the true flavor player was the chili and mustard. The mustard gave the dog the kick it needed to set it apart from a regular sausage. The cabbage was very mild in flavor, which helped give each bite a smooth finish.

I actually loved the pickles but found them to be extraneous in the dish. They had great flavor on their own but didn’t add anything to the dog that it didn’t already have. The pickles paired with the mustard were too overpowering and actually took away from the dish so I chose to just put them on the side.

My favorite part about the dish was the pretzel bun. It was soft and buttery. It wasn’t too greasy and helped pull in all the flavors together. Overall, I really enjoyed my first culinary experience in the Big Easy.