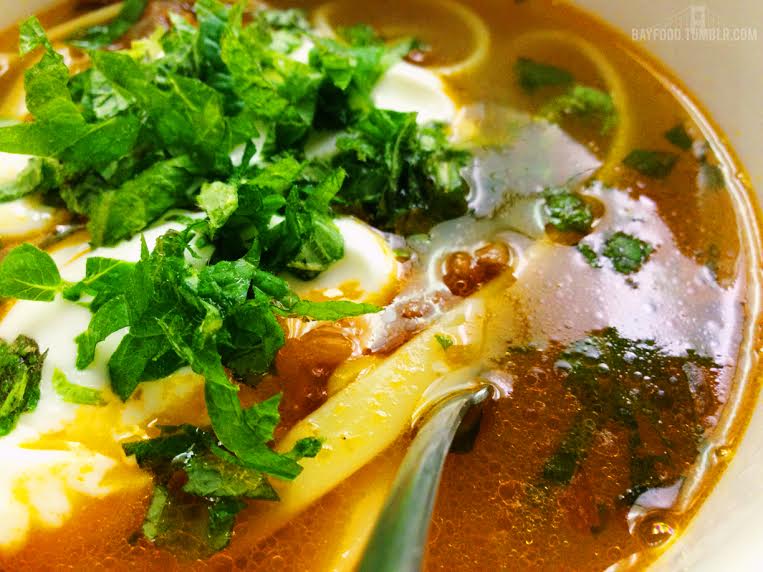 GOF Dish and Discuss: The Best Foods You’re Not Eating

Some foods just don’t get the love that they deserve. For some reason, they’re not “hot” at the moment but they’re so good, why would anyone not show them off? We decided to spotlight some of our favorite ethnic food restaurants. We’d love to see these small spots make Instagram posts more often! 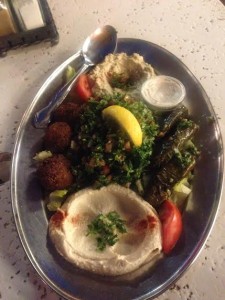 I have been eating Middle Eastern food for most of my life, even though I am pretty much 100% German. My mom lived in Turkey with her first husband and my dad worked in
Saudi Arabia for about a year when I was young, so both my parents have a really healthy appreciation for the cuisine. I remember my dad packing us all up and taking us out for Middle Eastern food as soon as he was back stateside from his work overseas. It became such a staple in our household that I now make Middle Eastern food for Easter every year, which we’ve affectionately dubbed “What Would Jesus Eat?”
Many Middle Eastern restaurants are actually Mediterranean/Arabian hybrids in terms of food, which means there will probably be some familiar dishes and some not-so-familiar dishes! Things like pita bread, hummus, falafel, and tabouli are common in most places (and let’s be real, they’re all delicious). Lamb is a common meat choice, though beef and chicken are pretty typical. Meat is typically served as shawarma (roasted on a spit), kofta kebab (ground meat mixed with spices and then grilled on a skewer) or kibbeh (minced meat in a doughy dumpling). Vegetables like eggplant, okra, and onions are very common with dishes and most grains are either rice or cracked bulgur wheat. 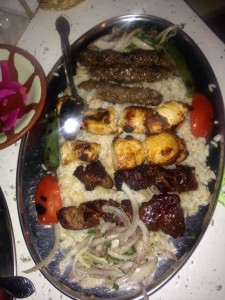 Middle Eastern food also features my absolute favorite kind of rice – saffron rice. I normally don’t care for white rice, but something about basmati rice cooked with little bit of clarified butter (called samna) and the much sought after saffron is just the best side dish to layer some lamb shawarma over.
If you have yet to try Middle Eastern food, I’m going to suggest you jump on Yelp and find somewhere near you to check out- you will be glad you did! 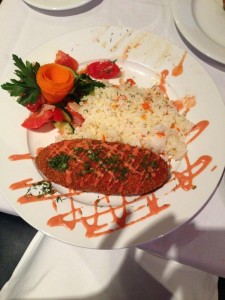 Instinctively, when I hear the word “Russian” I think of SATC and Carrie’s last love before marrying Big! Overly girlie of me, but that is the extent of my Russian knowledge. Well that, and they made/created my favorite libation, Vodka. My ignorance was bliss, until I ate at Firebird Russian! Completely out of my Midtown Sacramento comfort zone, I found myself in the suburb-ish city of Carmichael, squished in between some other non-descript businesses was our lovely little haven of Russian and Ukrainian food. I ordered the Chicken Kiev breaded breast of chicken stuffed with tarragon and parsley butter. I went with Rice and Vegetables side (insert Asian joke). My Kiev was a perfect looking breaded specimen. When I made the first cut juices oozed out onto the plate. It was the perfect blend of breading, moist chicken, tarragon, and melted cheese in the middle (a surprise for sure). The rice was a great compliment to the chicken. There were some veggies and a pretty carrot carved flower that adorned my plate too.

Reno Tastebuds – Ethiopian Food
Zagol’s Ethiopian Restaurant
855 E 4th St, Reno, NV 89512
Sälam! After giving much thought about what food I believed to be underrated in our country, I decided to take a closer look at the Ethiopian culture.  What does the food consist of? Is it vegetarian? Spicy? My inquiring mind and hungry tummy got the best of me, and before I knew it, I was sitting in Zagol’s Ethiopian Restaurant in downtown Reno.
Ethiopian restaurants are filled with soul and history. The restaurants proudly feature ancient art and jewelry crafted by their ancestors. 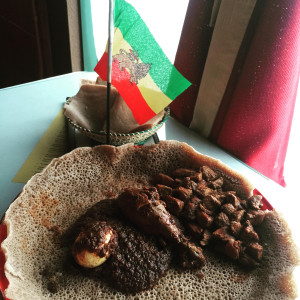 All Ethiopian food is served with injera, a traditional Ethiopian flatbread made with teff flour, which is also gluten free. The Doro Wat was a chicken leg simmered in a spicy hot chili pepper sauce with robust spices. It is also served with a hard boiled egg. The Gorad Gorad are cubes of beef lightly sautéed in purified herbal butter and sprinkled with chili pepper. The injera bread is meant to be pulled apart and that is what you use to pick up your food with. The bread is spongy, but acts as a utensil. Don’t use your hands! They will stain orange! I looked like an Oompa Loompa when I was done with stain across my mouth, cheeks and fingers. I guess it’s a great faux tan?
The dish was a beautifully made and served by people who were proud of their culture. I was honored to be educated by these kind folks and would recommend everyone to explore the adventurous world of robust Ethiopian cuisine.

Julianne – Filipino Food
LA Rose Cafe
4749 Fountain Ave, Los Angeles, CA 90029
Although I appear to be every “basic white bitch”, I am actually 1/4 Filipino. I’ve always been bummed out to not see delicious Filipino cuisine grace my Instagram and Twitter feeds. My Grandma used to have amazing potlucks in the summer packed with adobo, lumpia and halo halo. I took a stop into one of my favorite Filipino spots, LA Rose Cafe, this week and relived the flavors of my childhood.
LA Rose Cafe has been serving patrons since 1982. The interior has maintained that old school feel of restaurants that opened at that time. The service is so friendly here, you feel like the servers may be cousins of yours (Filipino joke). 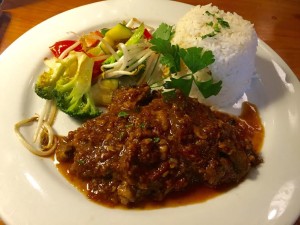 I got the Beef Mechado, beef simmered in a tomato, garlic and peppercorn sauce, which came with rice and veggies. The beef was stewed to perfection and it had the perfect fat to meat ratio. There was also plenty of peppery sauce to mix in my rice. 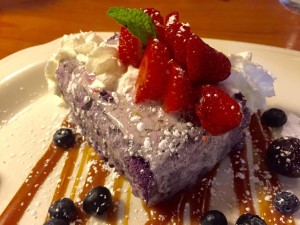 As much as I love my halo halo, I couldn’t resist trying a slice of their Ube Cake. Ube is a purple yam that Filipino cuisine has popularized. Why do Filipinos love it so much? Well, I don’t know. But they add it to EVERYTHING. And it tastes good, so why question it?

Iman– Afgan Food
De Afghanan
37395 Fremont Blvd, Fremont, CA 94536
If you haven’t had Afghan food, then you need to get in a car, plain, train, or Uber, because the Bay is where it’s at. We have the biggest Afghan population in the country, that the block where these restaurants and markets are clustered at is known as “Little Kabul”. You may have read or seen it in Khaled Hosseini’s novel turned film, The Kite Runner.
My favorite Afghan restaurant is De Afghanan, which originally started out as this tiny little shop next to a now defunct movie theater. I’ve personally enjoyed their food for at least ten years. It started out with basically two tables that were set up with what looked like basically someone’s mom churning out hot, round kababs, fluffy, buttery white rice, and a spicy chickpea-potato salad. It has now expanded to a bigger restaurant next door. Now you can actually sit down with family and friends to take in the murals of Afghanistan and cultural décor. But most importantly, it still tastes like someone’s mom is cooking these amazing kababs. 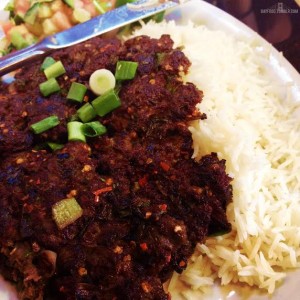 The things to get if you ever roll through Fremont: First and foremost, the Chapli Kabab. Rather than your typical round kababs that are cooked on skewers, these patty-like kababs are fried in a pan. When served, the beef is crispy and packed with spices when you first bite into it, but they’re not actually spicy, unlike their Indian and Pakistani cousins. Pair it with the white rice and cucumber yogurt, and it’s a trifecta of deliciousness. 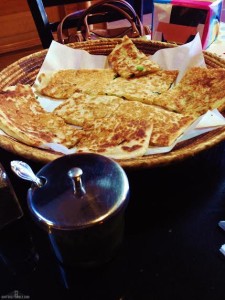 The perfect appetizer or side dish or next day breakfast meal, is Bolani. It’s a thin flat bread like lavash, only it’s stuffed with potatoes, leeks, and some spices. If you order it to go, it comes in a pizza box, because that’s how much Bolani you get. And you’ll be ecstatic about it. Waking up the next day and eating it with plain Persian or Greek yogurt is the greatest thing in life. 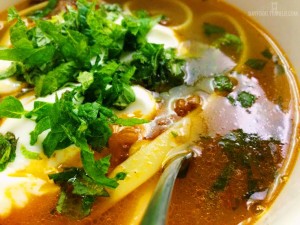 And last, but definitely not least, is Aush soup. I crave this when it’s chilly (which happens often in the Bay Area) or rainy (which doesn’t happen so often anymore) or when I’m sick. It’s the heartiest noodle soup. Ever. It has thick noodles in chicken broth with ground beef, lentils, spices, and yogurt, all topped with mint. Yes, you read right – yogurt. It adds a new layer of creaminess and tang you didn’t even realize you craved until you first taste it.