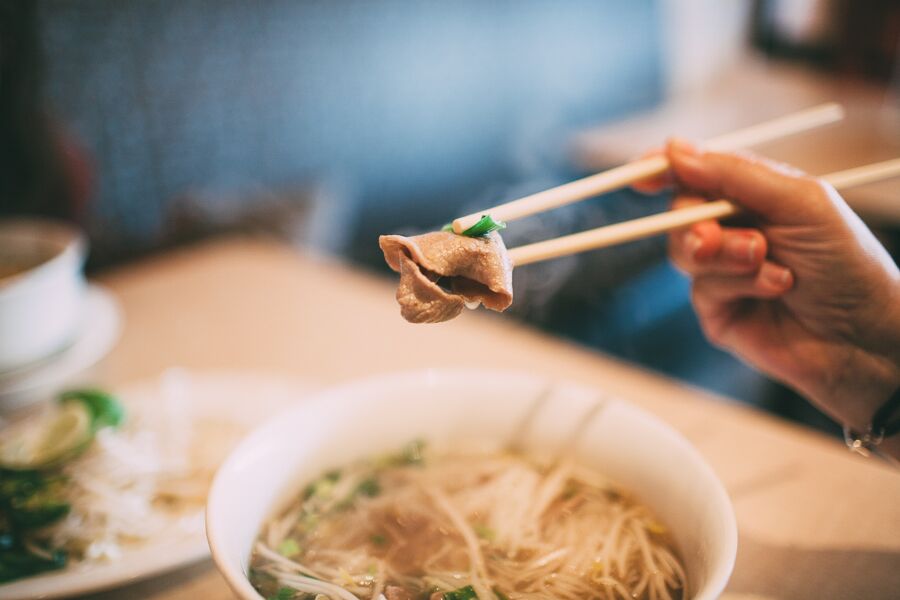 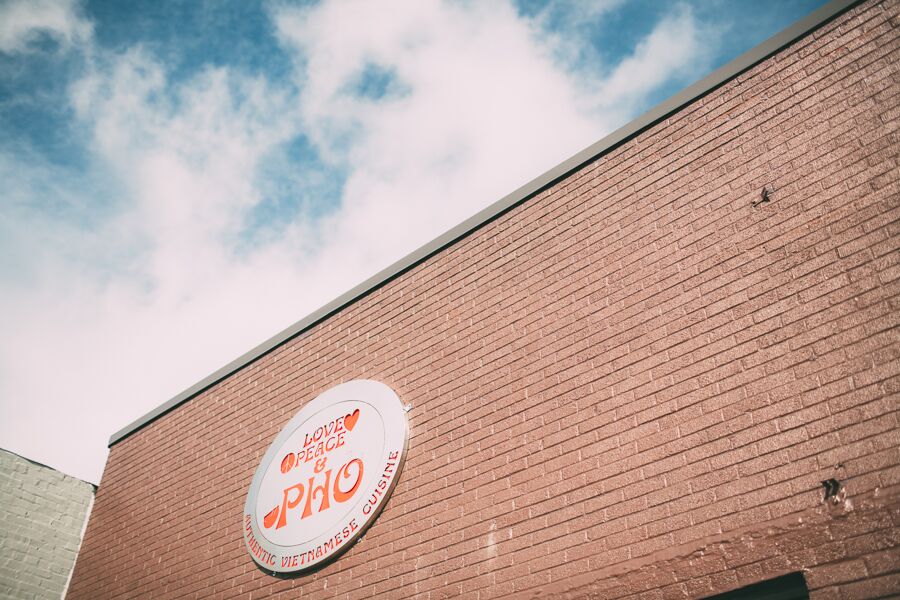 I was sick and it was raining, but I knew I had a post to turn in by Thursday, so I was thinking soup. I called my favorite photographers and asked them if I could take them to lunch. I had always wanted to try Pho and there was Love, Peace and Pho right down the road from my apartment. So I put on my rain boots, grabbed my laptop and out the door I went. 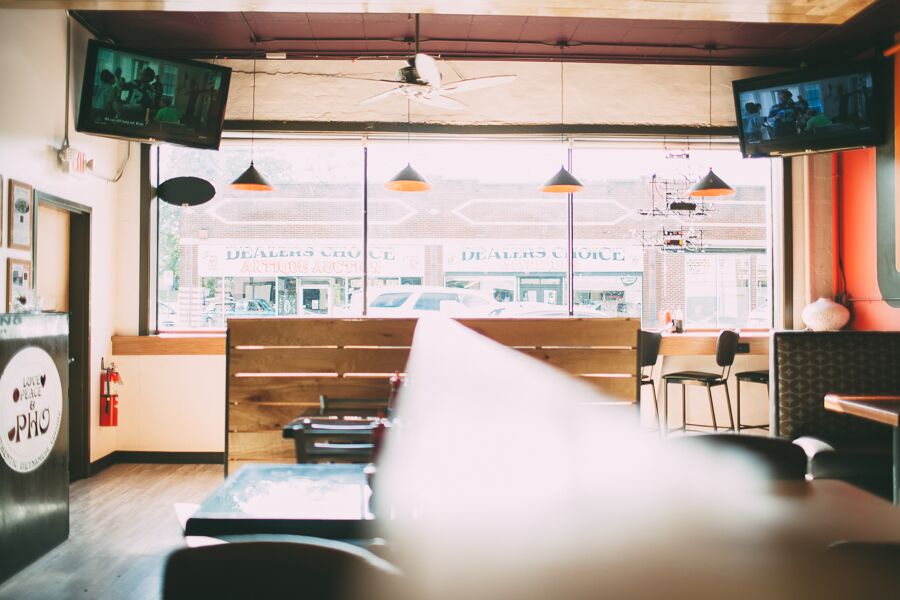 My favorite photographers just happen to be my son and daughter-in-law and since they were newlyweds they, of course, jumped at the chance to exchange photos for lunch. I figured their pictures would be so much better than I could muster for this post. My daughter-in-law’s brother also joined us. 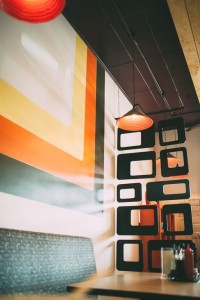 Before we get started, there is always a debate on how to say “Pho” and I’m here to clear that up, it’s “Fuh”. Now that that is taken care of, lets get to the good stuff, Love, Peace & Pho. The inside of Love, Peace & Pho is simple with a slight 70’s vibe going on and because of the time of the day we had the place pretty much to ourselves. The menu offers a wide variety of appetizers, soups, salads, Pho, noodle dishes, rice entrees, traditional Vietnamese sandwiches (Banh Mi), Chefs Box, and then desserts (more on the desserts later). 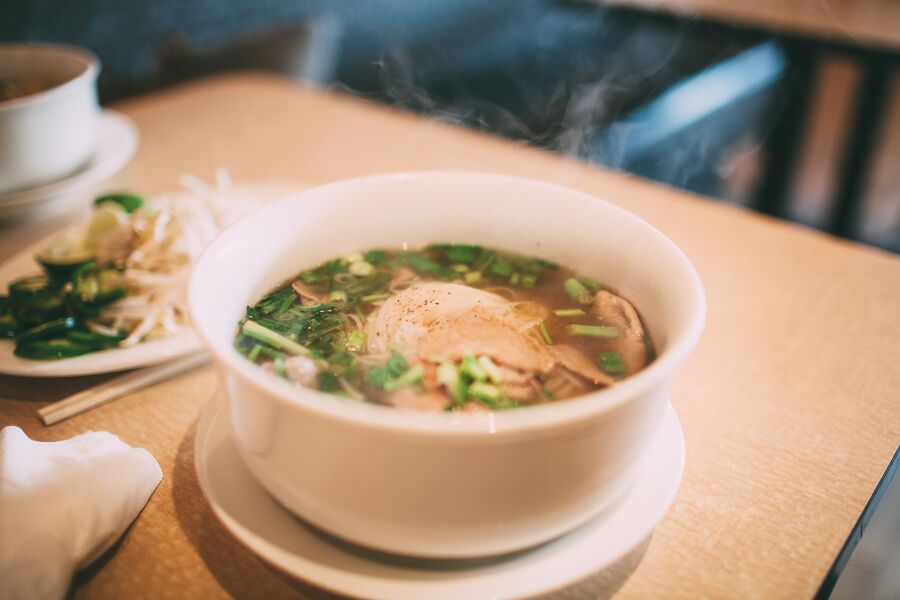 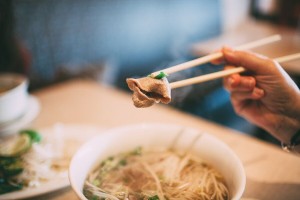 We all decided on the traditional Pho. My son and I had the Pho Tai, which was rare beef, bean sprouts, Asian Basil, Culantro, lime, jalapenos, green onions and shallots and an abundance of rice noodles. For all you Cilantro haters out there Culantro is NOT Cilantro, Culantro is a completely different plant, but you should think of them as cousins. In my opinion, Culantro tastes like Cilantro without the soapy taste. The beef in the Pho Tai was sliced very thin and while I’m sure when it first went into the soup it was rare, by the time it reached me it was more well done. Because it was sliced so thin it wasn’t tough at all and all but melted in your mouth. 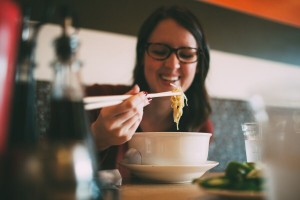 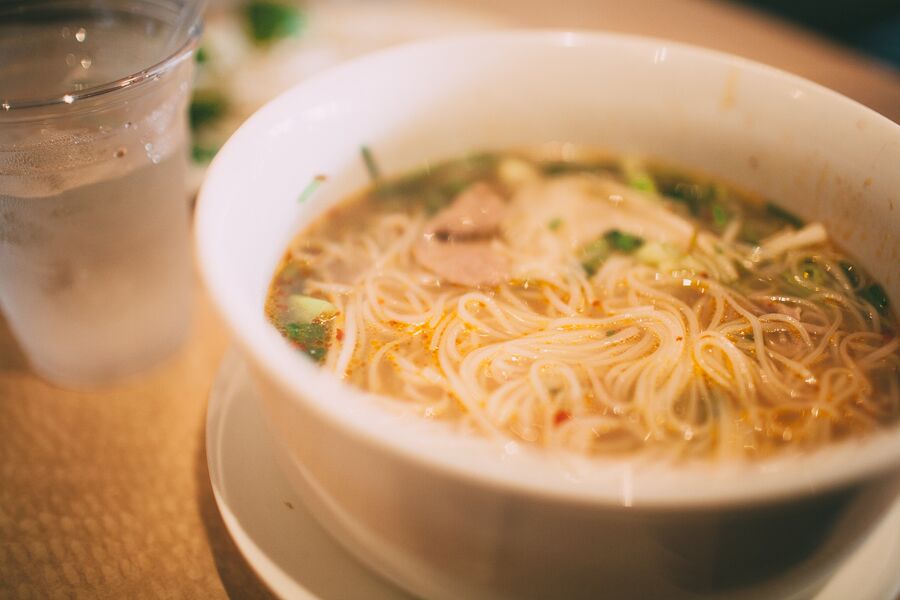 All the Pho comes in 2 sizes small or large. The small was 22 oz and the large was, well larger. Being a “my eyes are always bigger than my stomach girl” I got the large, which was enormous and will be dinner tonight as well.

All of us were pretty well stuffed when we were finished so we did not have dessert, however, it should be noted that they had odd choices on the menu. They had the traditional Che Ba Mau, which is a combination of yellow Mung beans, fava beans, red beans, coconut milk, jelly, and ice. That’s where the Vietnamese desserts ended and then somehow you were transported to Italy and France because the rest of the dessert menu consists of Eclairs, Opera Tortes, Framboise, Chocolate Mousse or Cheesecake. The dessert menu just seemed out of place.

For all four of us the total bill was $42 plus tip. Parking can be a bit of a challenge, but in my opinion very worth the walk, if you weren’t lucky enough to park close or the nominal price it would cost to park in the paid parking lot across the street. There are also lots of vegetarian options on the menu, which will ensure my husband’s attendance on my next visit.

The Friends That Paleo Together: Monique’s Paleo Challenge

I feel like I’ve been baking forever, but I believe my dad is the reason I started. He would bake all the time for us as kids and everything was always from scratch. I learned how to make everything from bagels to cream puffs to angel food cake from him. I worked my way up from selling cookies for extra money to buy my kids Christmas presents to owning a full-service bakery in Nashville. After making croissants by hand for a year straight, I developed arthritis so bad in my thumbs I couldn’t hold a rolling pin anymore and I had to close my doors. To give my hands something to do that didn’t involve butter or a rolling pin, I started to write and discovered a new love. I am excited to share with what the country might already know, Nashville is more than Country Music and Cowboy Boots, it has amazing food. Check out my blog, Heart Written Words chronicling the journey of closing a bakery and life after.