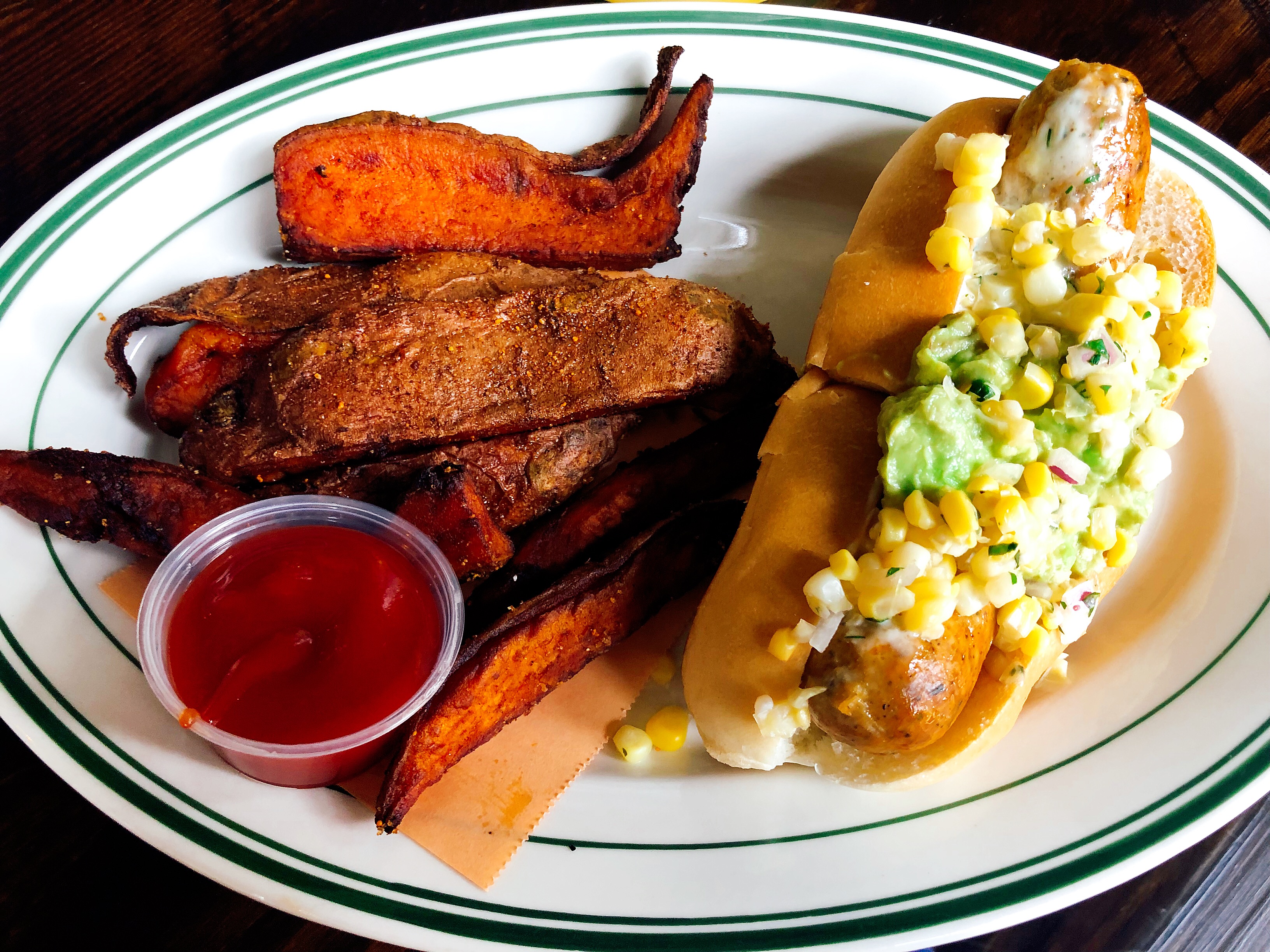 One of the biggest complaints I hear about the Nashville food scene is the lack of diversity. Let’s face it, there’s no shortage of fried chicken, biscuits and burgers. However, it wasn’t until recently that you could find some solid German food in Music City.

Before he became one of Nashville’s well-known restaurateurs, Austin Ray (A. Ray Hospitality) packed his lederhosen and made the pilgrimage to Munich to attend Oktoberfest. From the raucous bands, oversized pretzels, plentiful sausages, to the delicious German beer, the experience was one Ray would not forget. 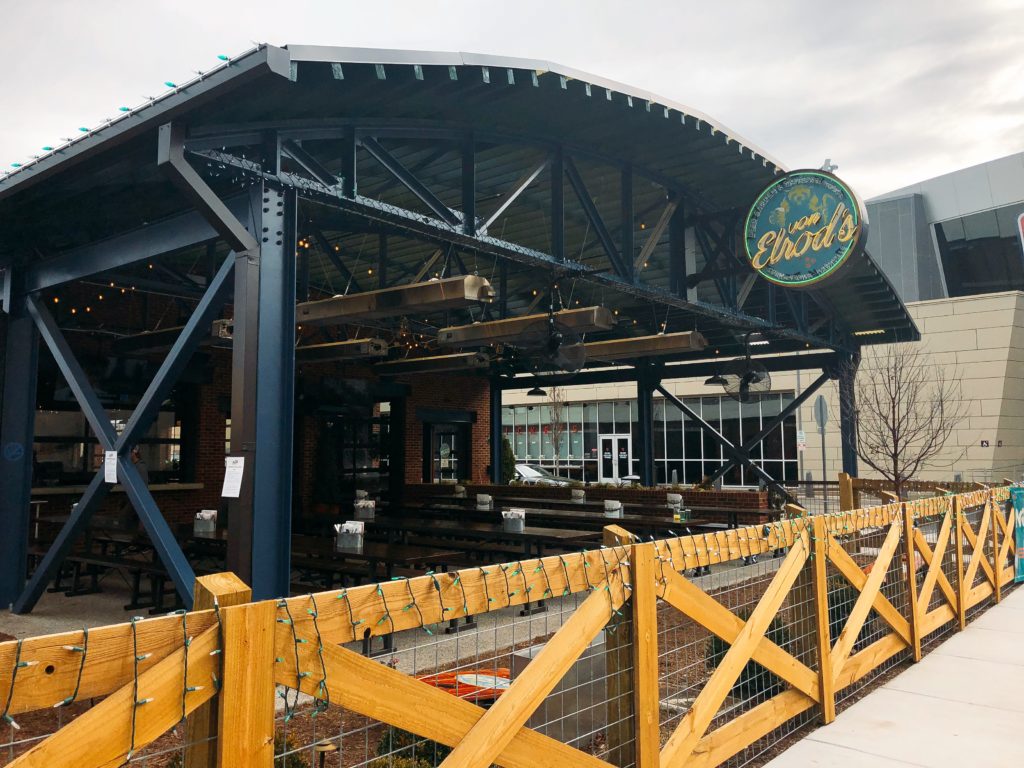 Fast forward through many beers and pretzels to 2016, Austin invited his friend and Nashville chef, Jason Brumm, over for a beer. While they were swapping stories, Jason spots a sausage cookbook in Austin’s kitchen. Ironically enough, it was the very same book that Jason was leisurely reading at home. Seriously, what are the odds?  Bound by friendship, a fondness for sausage and an unquenchable thirst for beer, Von Elrod’s was born.

Brumm, aka chief sausage officer, is now cranking out some of the finest sausages using the highest quality meats from only the most trusted suppliers. Located in historic Germantown near First Tennessee Park, Von Elrod’s is not only the perfect pre-game spot, but they have a solid happy hour and let’s not forget about Big Stein Thursday! 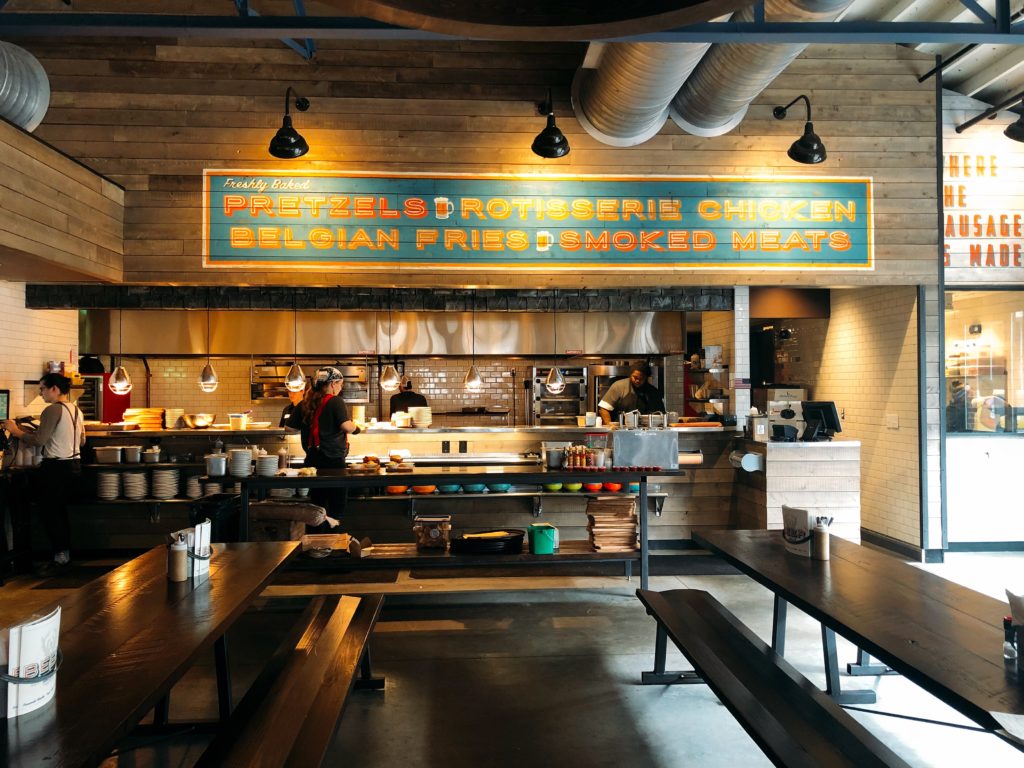 Previously an old bus depot, Austin and his team did an excellent job transforming this space into an inviting food hall and beer garden. Walking into the restaurant, you’ll notice the community-style tables and the kitchen sitting front and center. Quite possibly one of my favorite parts of the restaurant are the Nashville-centric murals adorning the walls. The murals include Minnie Pearl holding a bratwurst, a beer-weilding Godzilla taking over the L&C Tower and, of course, Athena is sporting her finest western wear. 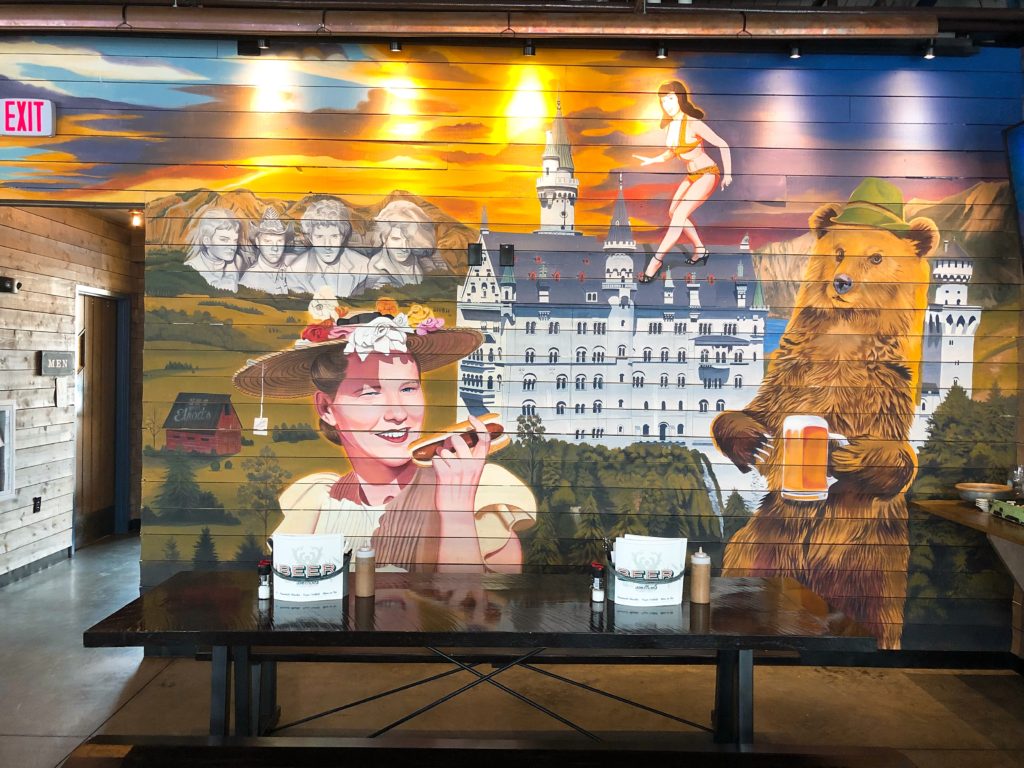 Next to the kitchen, Von Elrod’s showcases their hand cranked sausages, which are the stars of their menu. During brunch, I had a chance to catch them in action. 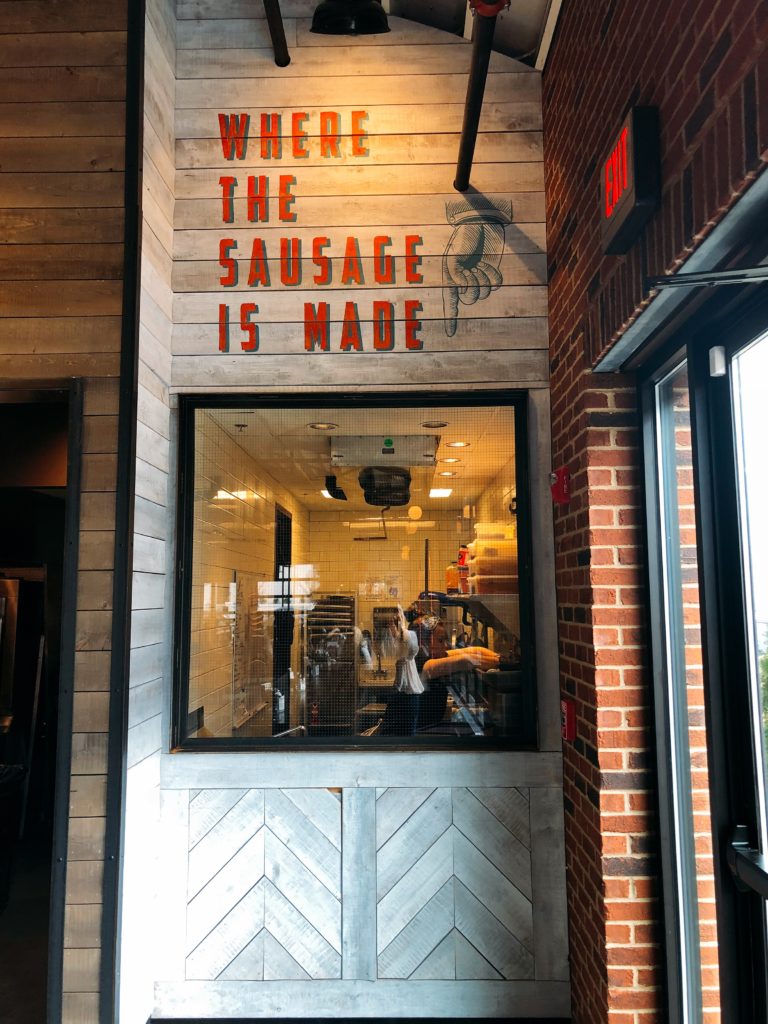 Now let’s talk about the tasty details, Von Brunch at Von Elrod’s. Von Elrod’s serves brunch on Saturday and Sunday from 10:00-3:00 p.m. I finally had a chance to stop by and sample some of their tasty German fare.

First things first, you can’t have brunch without mimosas. Period. Von Elrod’s presents the BAM (Big Ass Mimosa). Served in a liter stein, each mimosa has a bottle of bubbles. Talk about kicking off Sunday Funday. 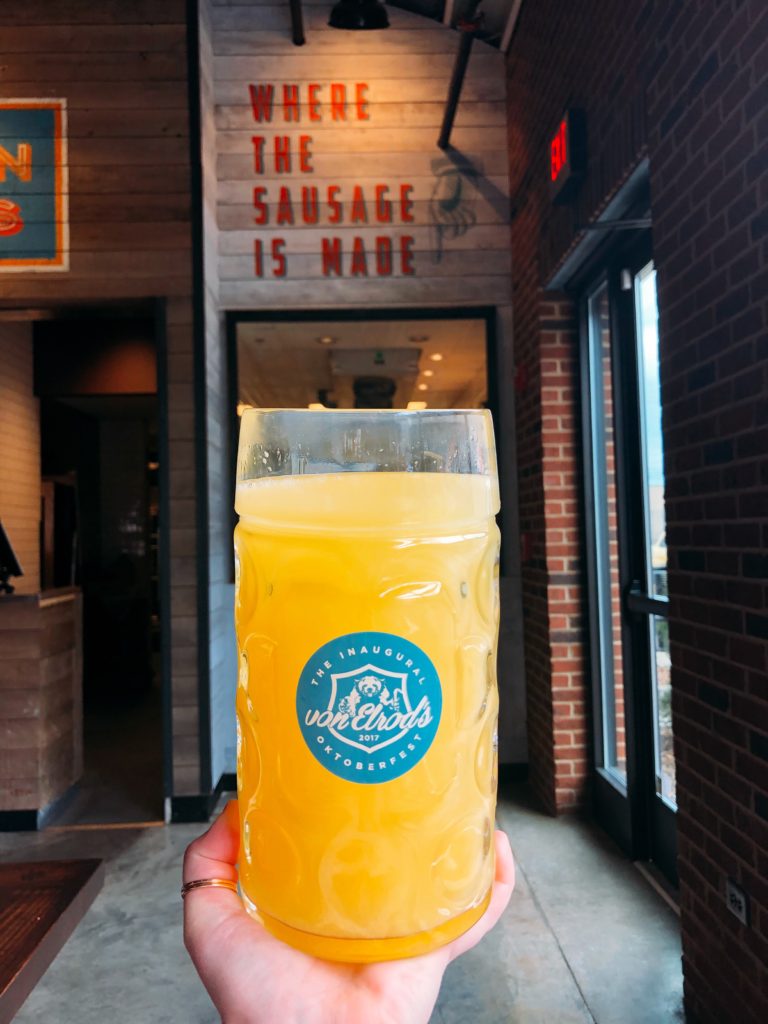 A word of advice, you can’t visit Von Elrod’s without ordering one of their famous pretzels. Without hesitation, I ordered the Classic Pretzel but had to follow the recommendation of my friend Beth Sachan from Eat Drink Smile and order both the beer cheese and garlic butter. Mixing those two together is like a little bit of heaven in your mouth. 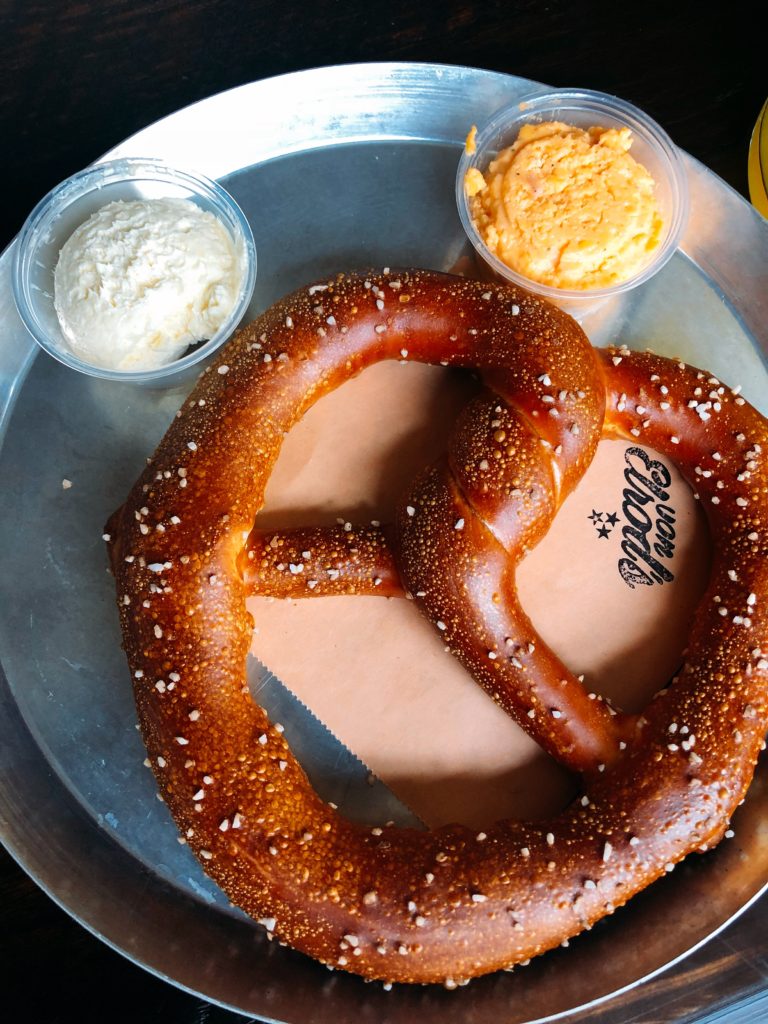 Another eye-catching menu item was Hashville. Von Elrod’s offers crispy, shredded hash browns with your choice of toppings (cheddar, onions, tomatoes, jalapenos, bacon and the Von Chili.) Having a hard time choosing? Go all in and order them loaded. They put all other hash browns in the city to shame. Trust me. 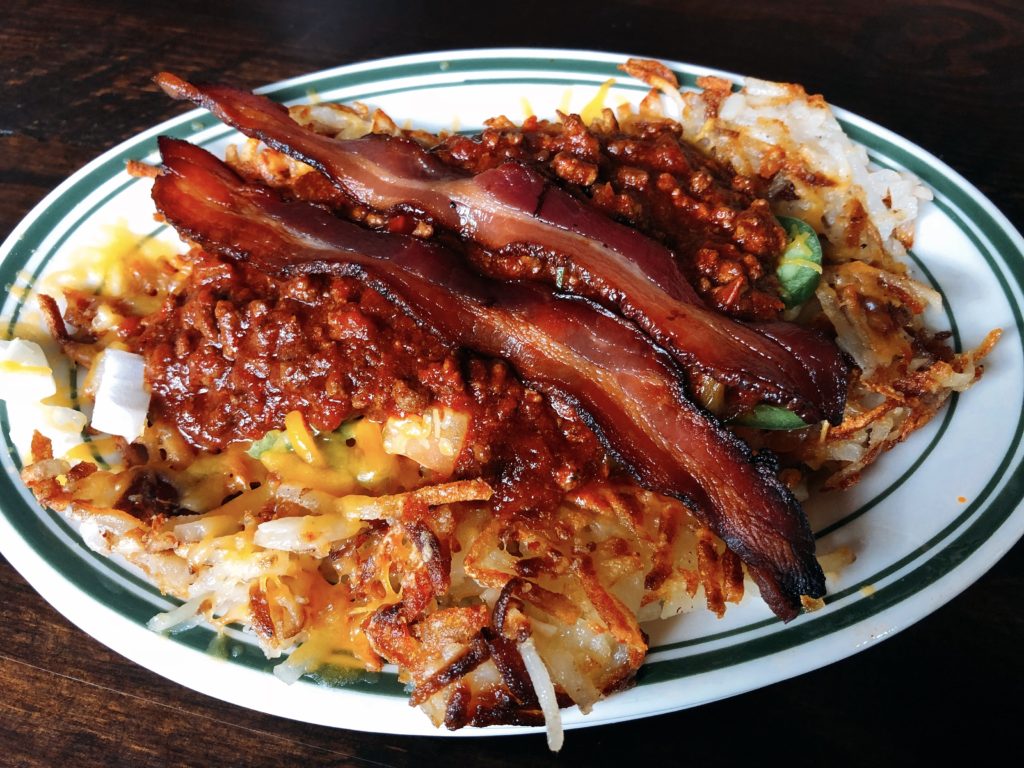 My stomach could not have been happier! Honestly, I could have made a meal out of the pretzel and hash browns alone.  For the sake of research, I wanted to try a couple of other menu items.

Von Elrod’s features six different brunch dishes and rest assured you will be torn on what to order. Each dish is served with a choice of hash brown casserole, cheese grits, fruit cup or side salad. (A word to the wise-don’t pass up the hash brown casserole.) Leaning more towards the savory options, I ordered the Breakfast Burrito which was filled with scrambled eggs, chorizo, black beans, cheddar, and poblanos. If that doesn’t have you drooling, the burrito was then smothered with pork green chile sauce and topped with a dollop of sour cream. Bring your appetite because this dish isn’t for the faint of heart. Thankfully, I was sharing this with my partner in dine or I would have passed out on the bench in a total food coma. 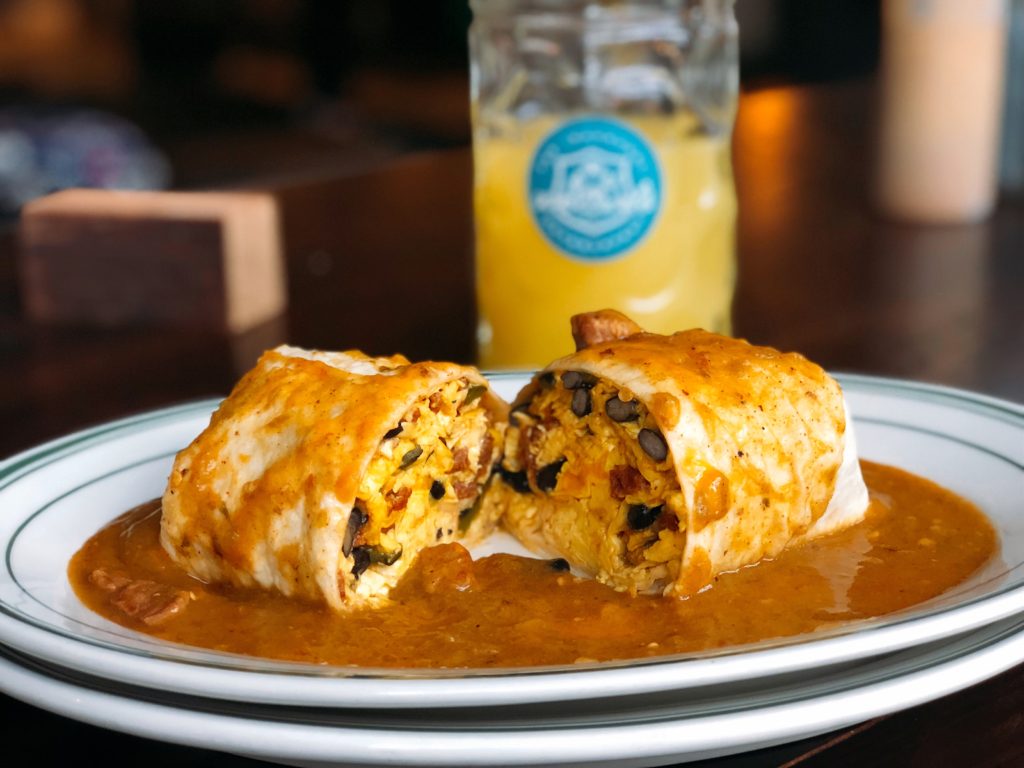 Making our way down the menu, we arrived at the stars, the hand cranked sausages. Brunch features four different sausage variations, each more appetizing than the last. Each sausage is served on a locally baked bun with a choice of one brunch side and house pickles. Struggling with our decision, we decided to call in the big guns and get some advice from our server who steered us towards the Angry Bird and insisted that we order the Sweet Potato Jojos. The Angry Bird is a spicy chicken sausage topped with avocado, buttermilk dill ranch, and corn relish. Insert eye roll here. Swoon! The bun was so soft and buttery it reminded of a lobster roll. The avocado was the perfect compliment to the spicy chicken sausage and I really enjoyed the ranch spices throughout. And those jojos? On point. 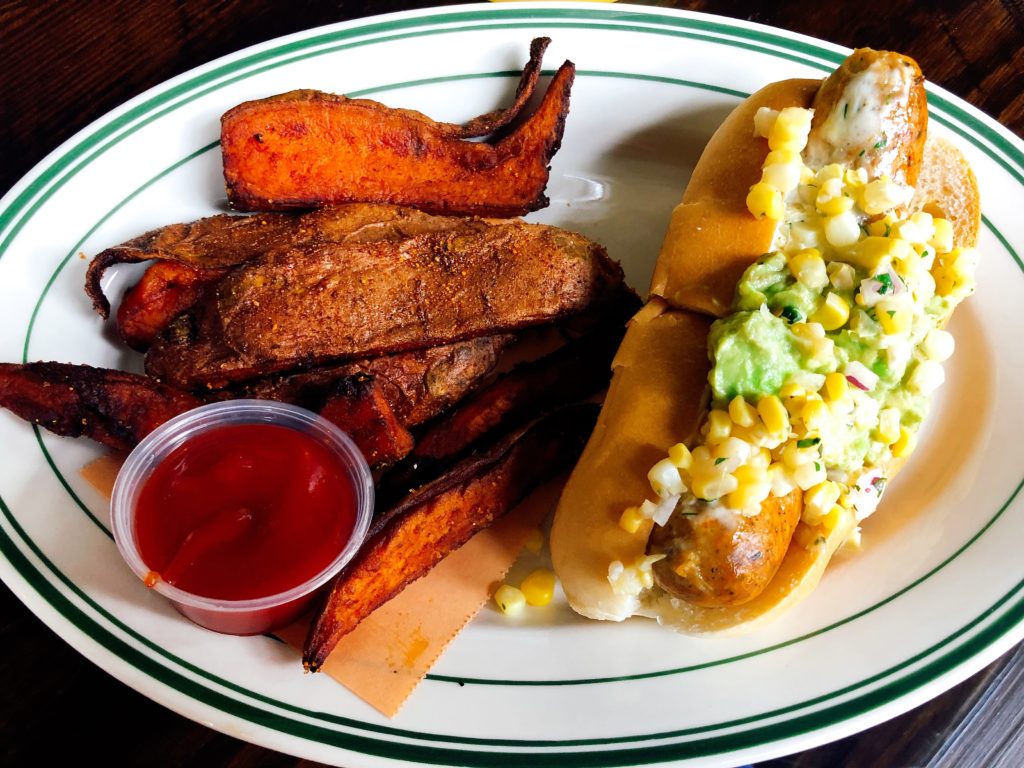 Von Elrod’s boasts quite the assortment of beers with over 36 on tap. For those imbibing enthusiasts who aren’t so keen on beer, Von Elrod’s has house shandies, frozen cocktails and wine available. 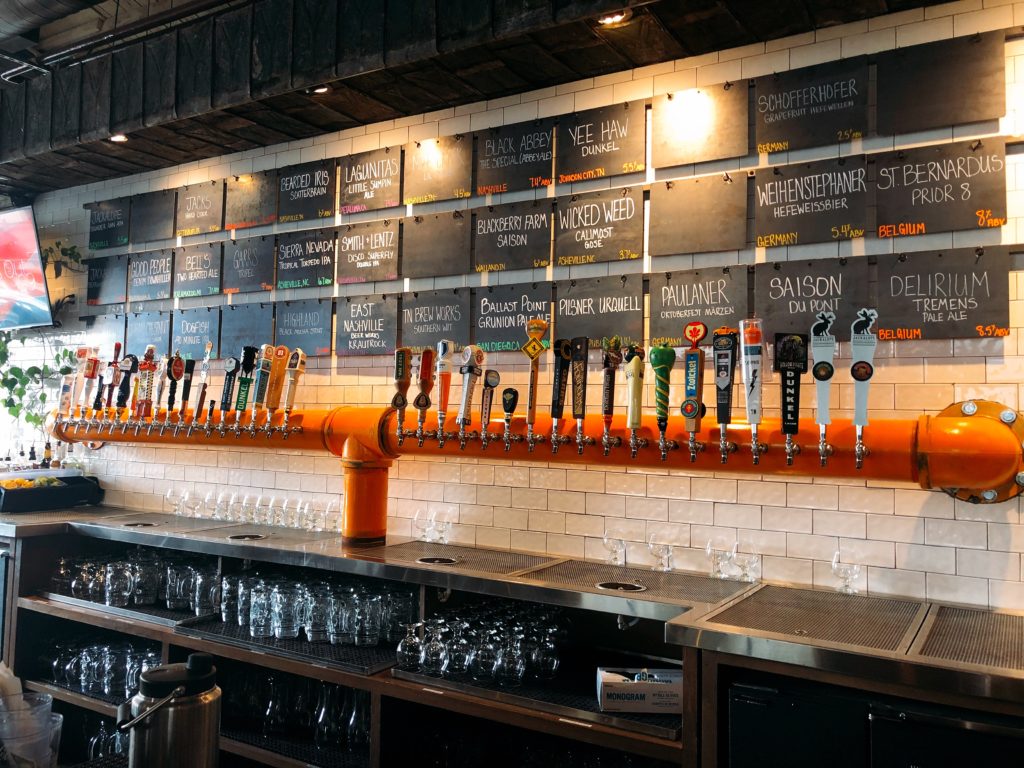 Von Elrod’s has two outdoor seating options: the covered patio (featured) and the beer garden. The covered patio has heaters and fans and if you position yourself properly, you can even catch a glimpse of a game. Many patrons were taking advantage of the unseasonably warm weather in Nashville and enjoying brunch on the patio. 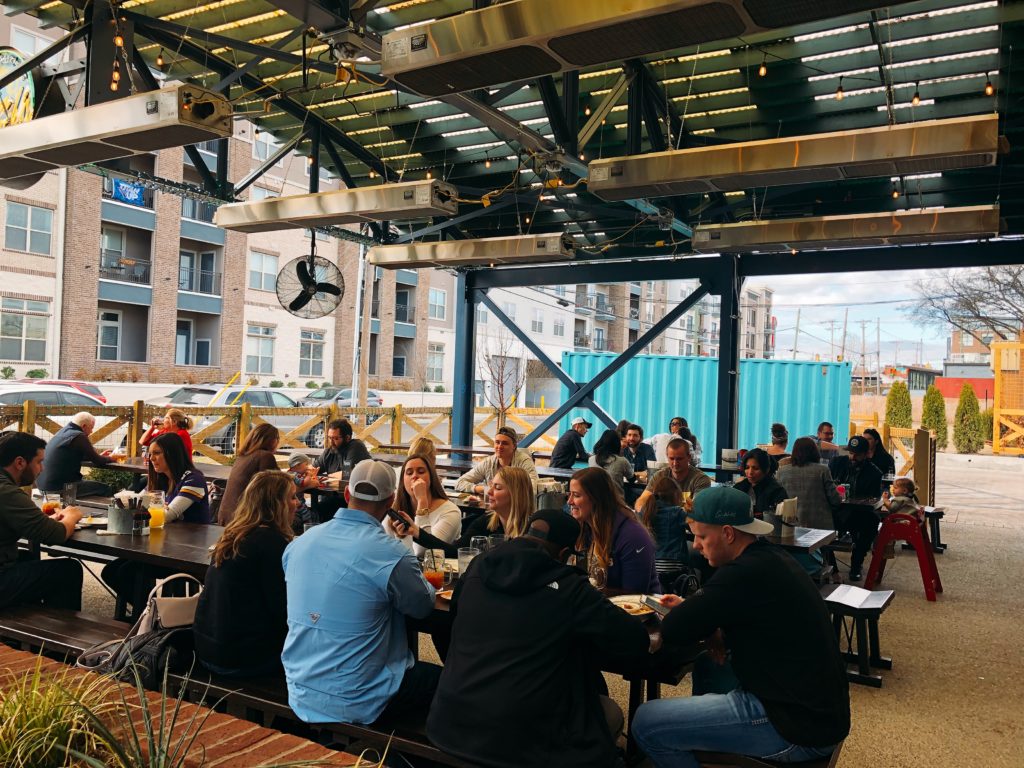 It’s safe to say that I have found my permanent post on Sunday Funday. The mimosas are plentiful, the sausages are tasty and let’s not forget those killer pretzels. I don’t give a schnitzel what your plans are, grab your lederhosen and head over to Von Elrod’s for brunch.