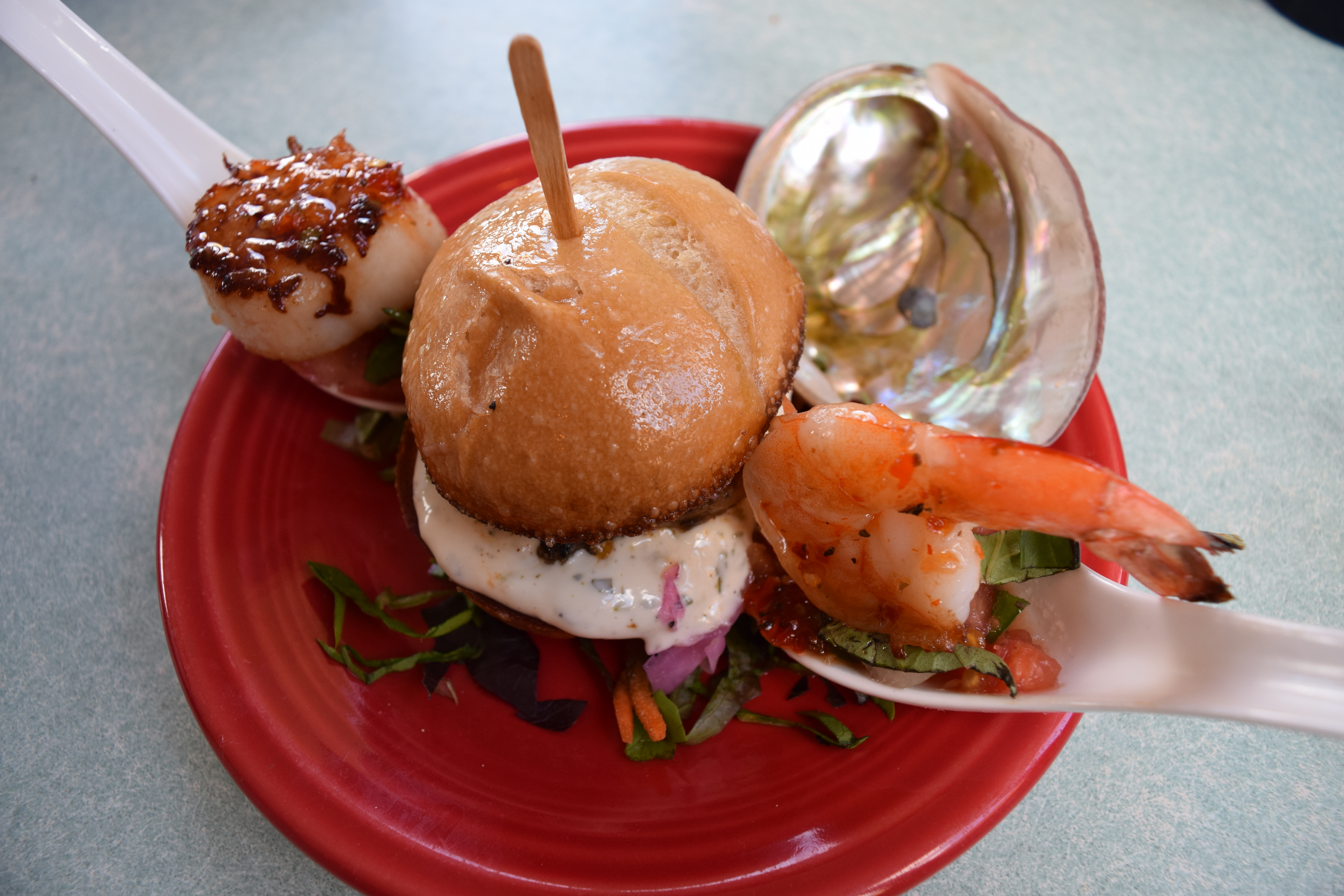 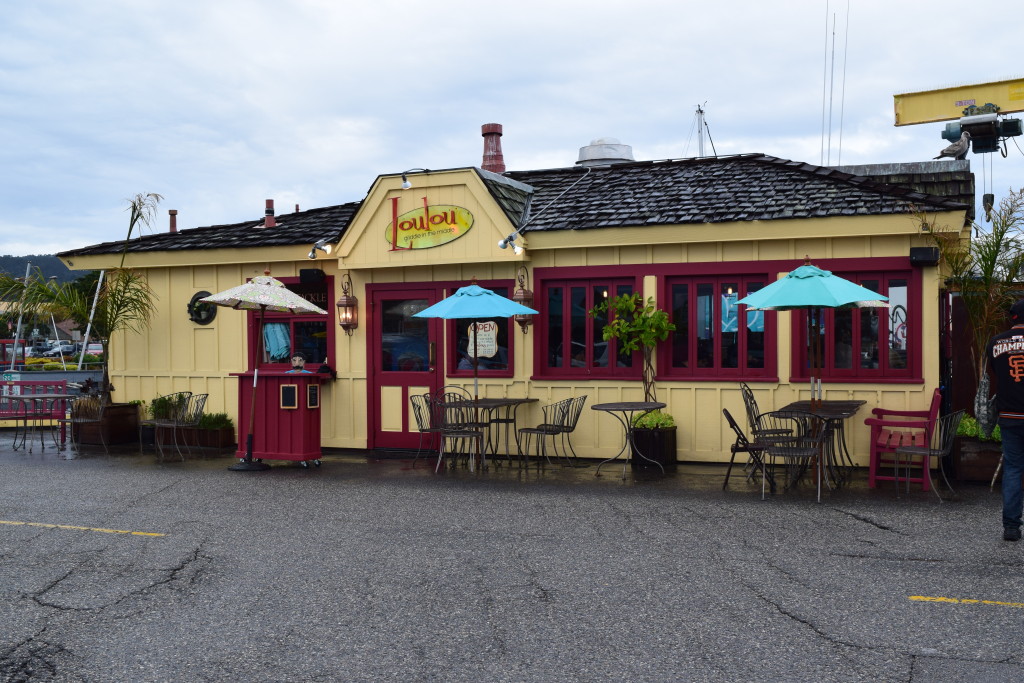 It was time to leave Reno, time for the vacation I had been dreaming about all year. My husband and I were going to embark on a California coastal tour down Hwy 1, with absolutely no schedule or agenda. We decided to include the word culinary to our vacation title, so here it was, our California culinary tour down the coast.

Our first stop was in Monterey, CA. We got into town late, so we found a quick bite and headed back to the hotel room where the beach waves that were right outside our hotel room crashed down so loud for a minute you thought you were living in the ocean.

Morning came quickly, and I was borderline hangry, but you can’t be angry in such a beautiful place, so we will stick with hungry. We found some locals and spoke to them about what breakfast places they recommend, and they directed us to Lou Lou’s Griddle in the Middle on Municipal Wharf 2.

As we approached the wharf, we noticed a bright yellow little building sitting literally, right in the middle of the wharf. Municipal Wharf 2 is a working wharf so there were many vendors and fisherman working away at their normal life, the normal life I escaped. I was in awe of everything, in awe of the fisherman, the people, the big boats, the trucks and even the courageous birds that were so bold and not scared of anyone.

We walked in to LouLou’s and noticed they were full. It was Tuesday around 10am, and full…it must be good! We waited a short time and then Gigi, the owner, greeted us with her genuinely warm smile and sat us at an adorable little booth by a window. It’s a one row classic diner stop that is colorfully decorated. We were able to see everything all in one birds eye shot. The restaurant is casually paced and the smells, oh the smells reassure you made the right decision to dine here. Diana Ross was jammin’ over the radio and the sounds of newspapers wrestling and coffee being poured joined Diana’s tunes. 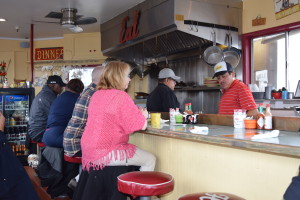 A very spunky and energetic waitress came around and offered to take our beverage order. She also made some fantastic menu suggestions. I also noticed that the busboy was working with a smile and chuckling with the fishermen outside. Everyone who worked here truly enjoyed being there and was pleased to serve.

After staring down all the guests plates in the diner, my eyes couldn’t believe what they were seeing. Pancakes, the actual side of a hubcap. They appropriately  called it the Hubcap Pancake. I don’t think I’ve seen a pancake that large. I decided to go with the Seafood Reef Rider Omelette which was a fluffy three-egg omelette with
shrimp, crab, mushrooms and monterey jack cheese. Hold on though! I wasn’t done ordering yet! I had heard the clam chowder was killer, and love me a good bowl of chowder, so I also ordered a bread bowl clam chowder for my husband and I to share. 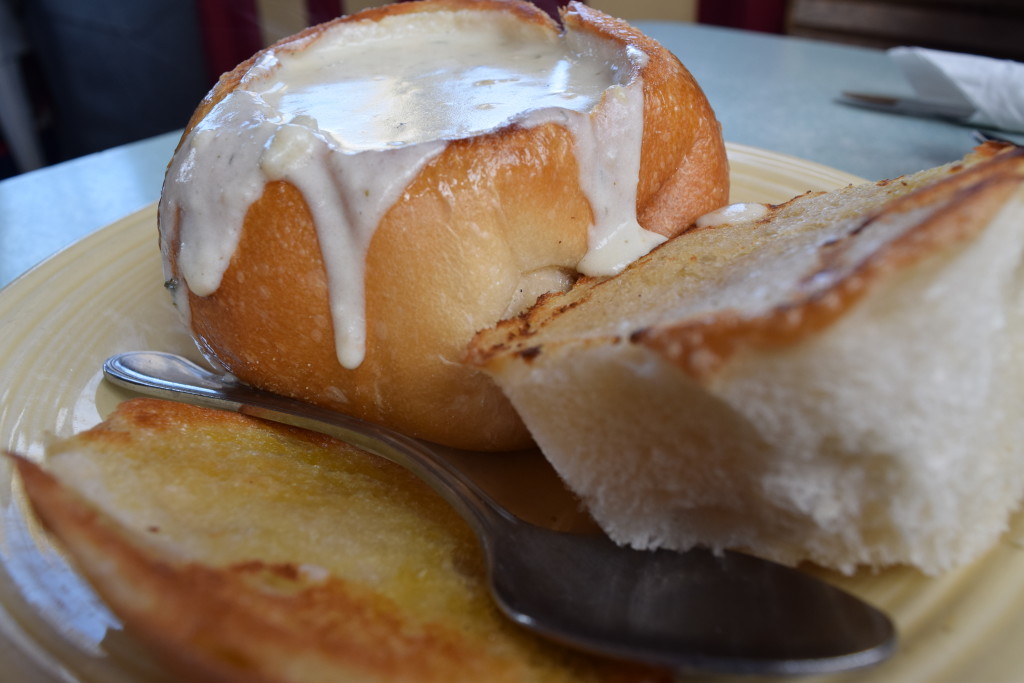 The clam chowder stole the show. It was smooth and creamy with oversized chunks of clams and potatoes. It wasn’t overly seasoned with fish base, this was the real deal. The bread bowl was warm and toasty and perfect for sopping up that amazing chowder that truly was a gift from the wharf gods. I ate and ate, with no limits. I kept repeating over and over, “That Chowder Though” until finally my husband asked if I was going to save him any. Oops! 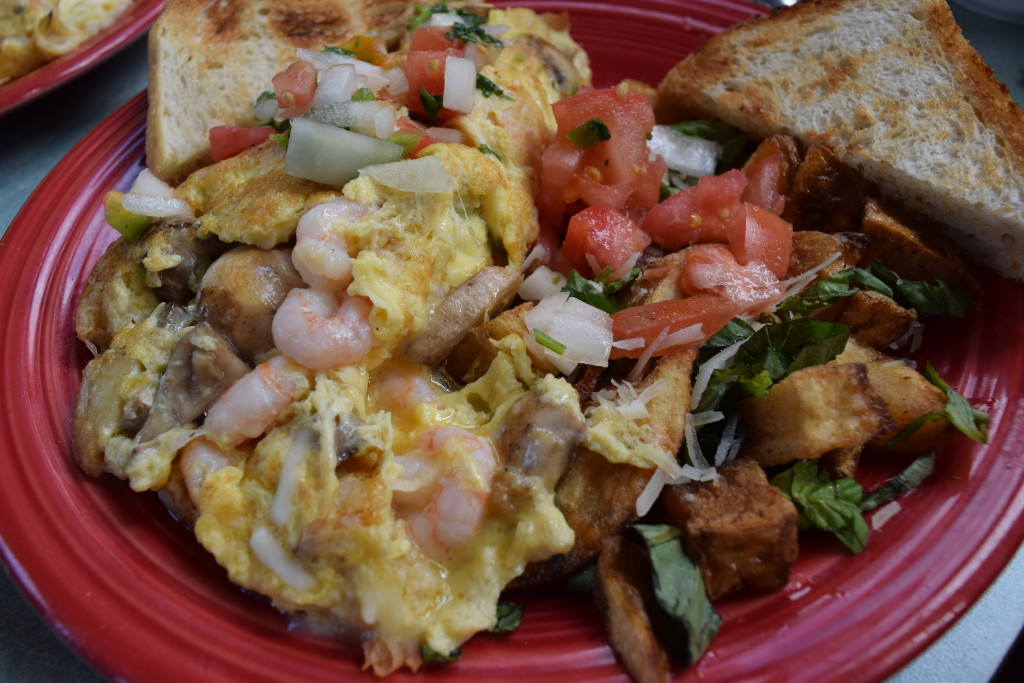 Next arrived our Reef Rider Omelettes. They were filled with warm melty cheese and succulent shrimp. The eggs were light yellow and fluffy, beautifully and perfectly prepared. You would think we would be getting full, but no. My husband noticed they had fried oysters on the menu and wanted to sample those as well as we are both oyster fanatics! You could hear them drop into the piping hot fryer and hear the sizzling and gurgling of the fryers. Shortly after being shucked, battered and fried, they arrived to our table and let me tell you, they brought sexy back. 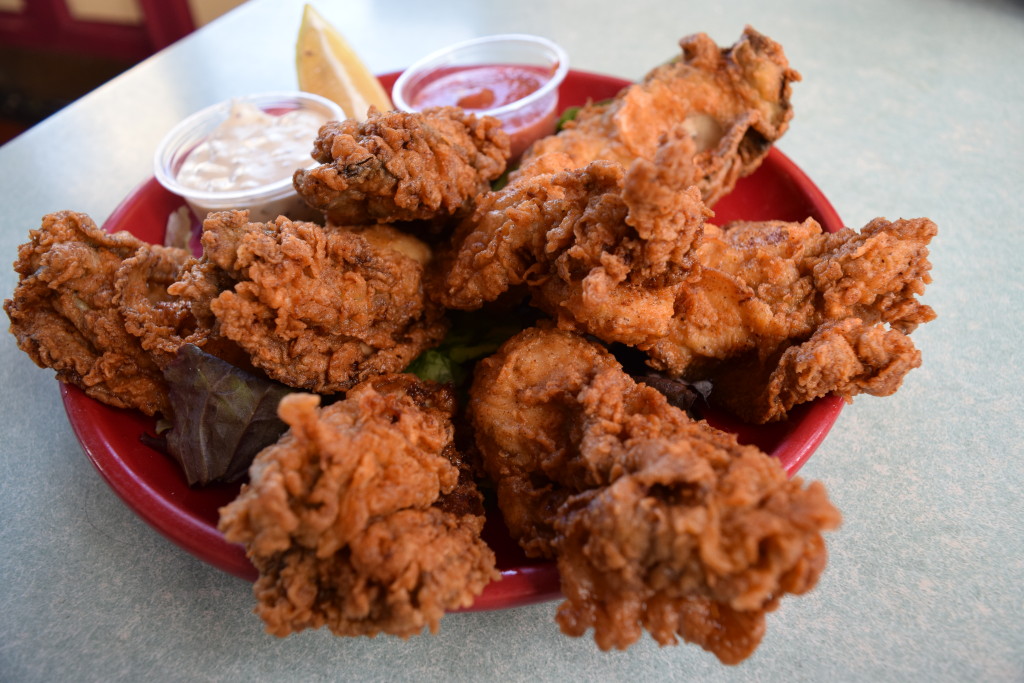 The oysters were FRESH, they were gigantic, they were juicy and not overly greasy or seasoned. The fryer oil was clean, you can tell they maintenance their fryers well because the color on the oysters was a beautiful golden brown and didn’t taste old or rancid. The oysters were delectable and superbly delicious. 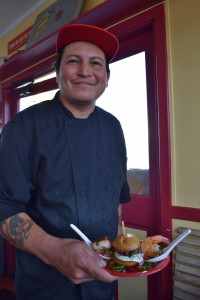 Once I introduced myself as a food blogger to the staff, it seemed to make more sense as to why the hell we were eating so much. Chef Benito visited our table and brought us a sample of his signature dish. He cooked this dish for Guy Fieri when Diner’s, Drive In’s and Dives paid them a visit. He brought us a beautifully constructed abalone slider with a seared sea scallop and prawn. The abalone was tender and lightly breaded and laid upon a slaw that complimented it nicely. The sea scallop was seared to perfection, falling right apart as you took your first bite. You can taste the passion that fires from within Chef Benito’s soul. He has been the Chef there for 14 years and clearly is a master at what he does. 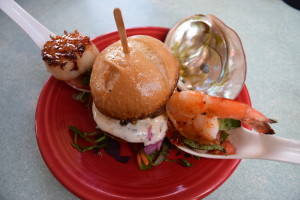 I highly urge my readers to please swing by LouLou’s Griddle in the Middle and experience culinary mastery at it’s finest. I have no problem driving 5 hours just to get my hands on another bowl of their Clam Chowder! They will NOT disappoint!

Adventures in Homebrewing with Elizabeth

I Want Candy: Sugarfina at Columbus Circle in NYC

My passion for good eats and restaurants started when I was 5 years old. Yes, you read that correctly, 5. My grandparents were my foundation and always enjoyed everything from a good ‘ole hole in the wall burger to seared octopus at the San Francisco Ritz Carlton. Of course, they always brought along yours truly, and I believe they had no idea what kind of foodie fanatic they were creating. Our family restaurant was always, “Original Joe’s” in downtown San Jose. The waiter would kindly ask what I would like to eat, (expecting me to order something like a child’s sized spaghetti like the rest of my cousins) and I would very confidently state, “I would like a New York steak, rare, with seasonal vegetables and a baked potato with sour cream and chives, please.” My Grandpa would always laugh and tell the waiter, “She better marry someone with money, this girl is expensive!” Later in life, the fire for food that burned inside me grew into a full on blaze. I started off in the restaurant business and worked every single position that exists. With dedication and a strong desire to succeed, I soon grew to be a professional chef. I absolutely loved watching people enjoy the meal I put in front of them. I loved seeing families laugh and create memories over a heart felt meal that I had prepared. The intensity of the kitchen, the plating, the perfection of timing in bringing a dish all together was a rush that I craved on a daily basis. After 8 years, I did decide it was time to keep my passion alive through my family and friends, so here I am! Thankfully, I have had the blessing of living and experiencing great culture. I grew up in the San Francisco Bay Area with hanging chickens on the streets, eventually moving to the beautiful city of Chicago with my husband for a short stint only to settle in the Biggest Little City aka Reno, NV with Lake Tahoe as my back yard to play in. I have experienced everything from Alligator in the back woods of Florida, deep dish pizza in Chicago, to Escargot right here in Reno. I also spend a lot of time in Lake Tahoe finding the local hot spots and lounging on the beach. I’m looking forward to bringing you exciting, witty yet genuine reviews right here from the Reno/Lake Tahoe area! Check out my blog Reno Tastebuds.