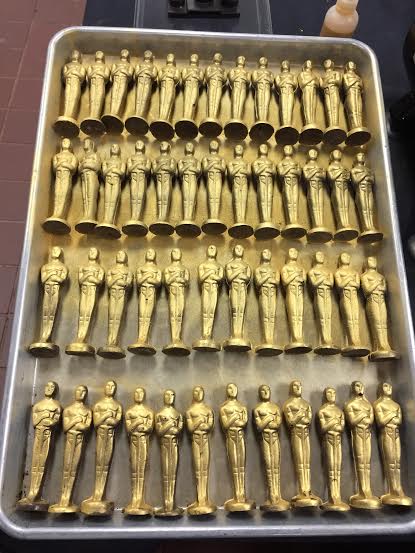 First off, shame on The Academy for not acknowledging my accomplishments in film. How did I not get nominated for my performance as The Bagel Girl in “Cupid and the Bagel Girl”? Nothing for playing Amusement Park Girl in “Sensored”? Clearly they never saw “When Sally Met Rascal” cause they would’ve fixated on one of my finest roles, Yapping Lady. These Academy voters are clearly out of touch cause I should’ve had an invite by now!

While my dreams of ever being invited to the Oscars is a little far out there, Wolfgang Puck Catering invited me in for a sneak peek of their Oscar night catering. For those of you who may not know, this will be WPC’s 22nd consecutive year catering the Governors Ball celebration. It’s an enormous task, and the average amount of guests at the Oscars are 1,5000. Growing up, I would see post-Oscar party pictures and think “someday I’ll be in a fancy dress at one of those parties.” Ok, so maybe I’m not an actual guest at the party, but this is pretty close. Plus, this is even better than any awards show, because the Oscar I received was edible. If you’re looking for a catering company, WPC may just be out of most of our price ranges, so instead you may want to look for a service such as The Bespoke Chef or likewise caterers, depending on where you live.

The Governors Ball will take place in the Ray Dolby Ballroom on top of the Hollywood & Highland Center in Hollywood immediately after the Oscar telecast (this Sunday, Feb. 28th). I checked in for my media pass at the Loew’s Hotel and got to walk through the ballroom. It looked like such a hush-hush, top secret environment. I felt like my (super sweet and cute) escort was a secret service man to my President Obama. Everything has to be perfect for this party, so being there on the Thursday prior, they were already stressed, but friendly faces. When I walked into the kitchen, WPC was prepping, and it also had a hustle and bustle feel to it. Everyone was hard at work, and I almost felt a little sorry, as if I was in their way. But then I saw their hard work put into the beautiful spread and decided it wouldn’t hurt them to take a bunch of pictures. 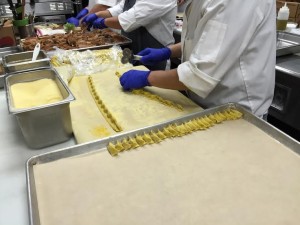 Prepping the Artichoke and Fromage Agnolotti 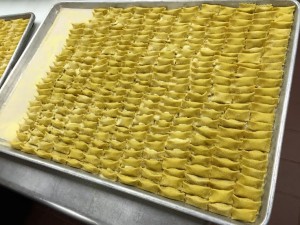 The spread was fantastic, and all different foods were present, hors d’oeuvres, table platters, an ice bar, hot small plates, cold small plates even a chocolate buffet. You can see a video of it here on our Instagram page @girlsonfoodblog.

The best part of this tour is that Wolfgang Puck himself came out and talked to us. Wolfgang is very approachable, and there was no question he wouldn’t answer. He gave us the lowdown on what 20 + years of catering the Governors Ball have been like and even gave us a cooking demo! 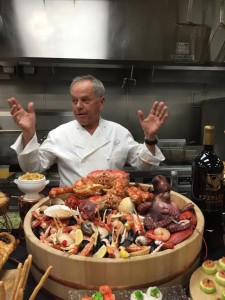 Wolfgang Puck and his Seafood Bar

After wandering around, I can say that if I were attending this party, I would be very excited for the seafood bar, which will feature fresh King Crab, Scallops, Fanny Bay Oysters, Octopus, and Shrimp. There is also another video here that shows some of the more savory foods, including Baked Macaroni and Cheese, Baked Potato with Black Caviar and Chicken Pot Pie with Black Truffles (a favorite of Barbara Streisand). 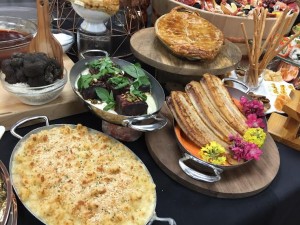 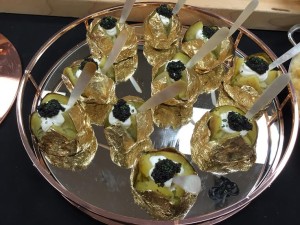 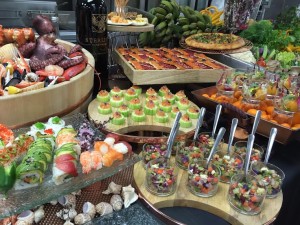 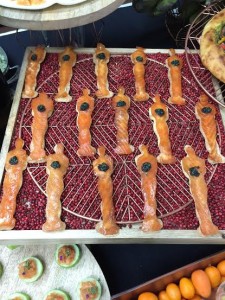 Watching Wolfgang cook was quite a treat. He tried out a new item; Emerald Rice topped with seafood, and since I’m a quasi-pescetarian, I’m hoping this dish makes its way onto the catering menu. 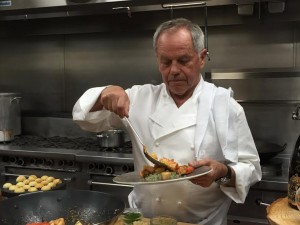 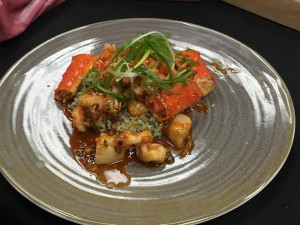 It’s an honor just to be nominated… who are we kidding? We want to win! But those who aren’t so lucky don’t walk away empty-handed, they, at least, get a famous WPC 24-karat-solid gold chocolate, Oscar. Not too shabby! They start out the traditional color and then are transformed into the iconic statue with an edible golden spray. 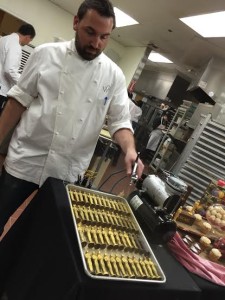 You can see a video of Exec Chef Tyler Attwell in action coating the Oscars here. His favorite dessert is the Peanut Butter Ring Ding, but as you know, I’m all about that gold. 5,000 of these chocolate Oscars are going to be produced, and it’s the most sought after item. 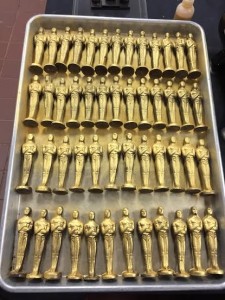 The other desserts include a Macaron Tower, Caramel Oscars Lollipops, and Tiramisu Push Pops. 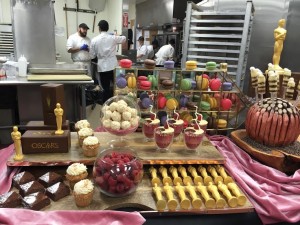 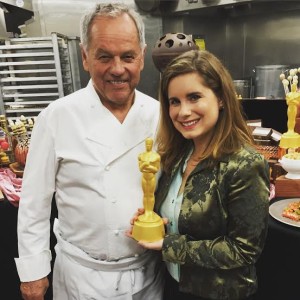 And the Oscar goes to…

Thank you so much to Wolfgang Puck Catering for inviting me in! I wish I could be at the Governors Ball Party, maybe some day. 🙂

Be sure to watch The Oscars live Sunday, February 28th 7 e/4 p. Also, keep an eye out for the after party, I’m sure you’ll see WPC’s food through out! Happy Oscar Sunday!