Every craft beer loving girl out there can relate – you’re at a bar, and you spot a delicious IPA on their tap list. You excitedly approach the bar, ready to order your delicious beverage of choice. You tell the bartender your order, and he looks at you and goes, “Are you sure? That’s a really hoppy beer.” 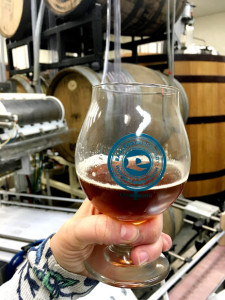 Sadly, this is a familiar scene to those of us ladies who like our beer. But never fear, we are banding together to create girl power beer clubs. The folks at Eagle Rock Brewing have been hosting the Women’s Beer Forum for four years. Each month they host a ladies’ only event that spotlights different local breweries, women in the industry, and spectacular beer and food pairings.

I visited their Women’s Beer Forum while they were hosting Arts District Brewing and it was such a fun night! Arts District Brewing is a brand new LA based brewery putting out some fantastic beers, and their head brewer is a lady brewer to boot! We got to try some brand new experimental beers, as well as, some tried and true favorites. Plus, stick around after for a tasting flight of Eagle Rock Brewing’s very own beers, you won’t be disappointed!

Overall, I was very impressed with all five of the Arts District Brewing beers we tried that night, The Traction IPA and Puerto Rico Porter were both fantastic beers, and we also got to try several new brews. Their head brewer clearly knows what she’s doing.  She has worked with Pizza Port Brewing among others and has several awards under her belt. We stuck around afterwards and tried a few of Eagle Rock Brewing’s beers, which were also fantastic.

It was an incredible experience to be surrounded by such amazing women who both loved beer but were also working so hard in the craft beer industry. There is much to be learned and lots of wonderful women to meet at the beer forum. So if you want to hang out with your fellow beer loving ladies, make sure you get on their mailing list so you can visit.