Living in North Carolina, I’m used to some hot summer weather! But that seems like a silly reason to give up one of my favorite food platforms for an entire season each year. So this year, we decided to find a couple of soups that are refreshing and use the best of the local produce. I’ll keep these coming as often as I find a new one. This corn chowder has to be credited to my favorite: Gwyneth Paltrow. My sister-in-law gave me Gwyneth’s first cookbook, My Father’s Daughter, for Christmas a few years back. I LOVE this cookbook. She lived in Spain for a time in her teens and had a lot of Spanish influenced meals. Most people who know me, know that my husband has been privy to many a sweet nothing whispered of an ex-pat retirement in Spain, ever since we spent two weeks there on our honeymoon. So, GP and I are obviously kindred spirits. Plus, she’s from Long Island, so… (Yay New England!!) 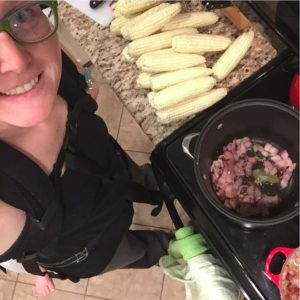 This corn chow-dah is perfect for spring and summer nights! It’s light but filling, and the corn is so delicious when it is in season! This can be the perfect start as an appetizer to some fresh seafood on the grill, or as a full meal. Whatever your preference, I hope you enjoy this as much as our family does! If you follow a vegetarian or vegan diet, follow Gwenie’s version, since mine uses a little meat. 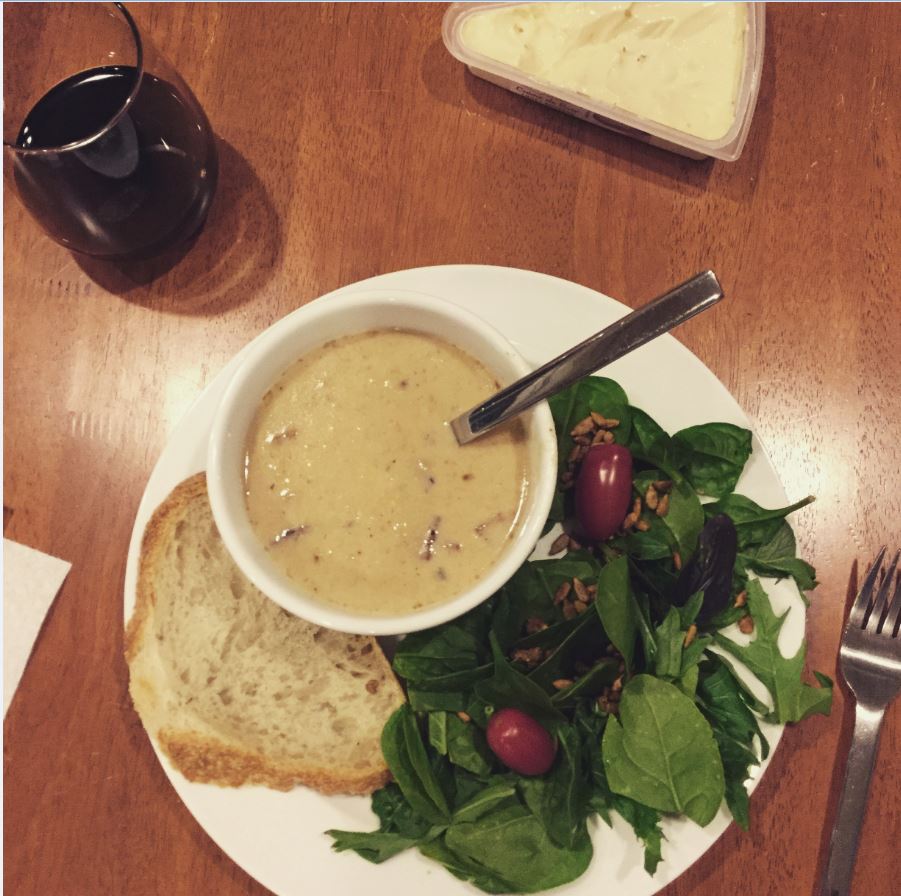 I usually serve this with some crusty bread and a small side salad. We bring it to BBQ’s as a side, make it as an appetizer on night’s my parents grill burgers/lobster/swordfish at the beach, and make it at home as a main dish, so we have a quick meal to pull out on busy nights! Enjoy!

I am a New England girl who has bounced between Connecticut and North Carolina her whole life! Raised by busy parents and with 3 siblings, we often ate very simple meals together, and would come together on Sundays after church for a big meal. In the summers we would head out to a small town in Rhode Island, where there are no chain restaurants. That really established my attitude that it is so important to support small business and source locally grown products. Even to my pre-teen self, you got to know the restaurant owners and their success made you proud! The majority of my developmental jobs were in the restaurant industry. I scooped ice cream. I made sandwiches. I worked in the kitchen at a summer camp, doing hundreds of dishes a night! I managed a snack bar, waited tables, served. Through all these years it instilled many simple and critical habits. How you plate a meal. How it should taste. How you treat people. How the quality of the food is the most important thing. Today, I am happily married with two kids and a full-time job, commuting about an hour a day. We still love eating out and have established a “family date night” every Friday night. It’s our time to come together and breathe. Our kids are 2 and 6 months. We eat at 5:30 – it doesn’t matter how fancy the restaurant is if you go early enough! This gives my husband and me the opportunity to try out new restaurants. It gives us time with the kids and each other without any distractions. We feel normal and fun! The rest of the week I try to get a healthy dinner on the table every night. I love looking at recipes and tweaking them! There’s a lot of crock pot meals and meal prepping. It’s so much fun! I’m so excited to be joining the Girls on Food community and sharing recipe ideas and fun restaurants in and around Raleigh, NC! Follow me on Instagram @RealFood2015 for my day to day!