The Romans conceived the first known pie recipe, and it was a rye-crusted goat cheese and honey pie. Then pies began to appear in the early 12th century, but mostly meat pies. Fruit and sweet pies are thought to be first made in the 1500’s. In fact, the English claim to have served the first cherry pie to Queen Elizabeth I.

Fast forward to the English settlers coming to America. Fruit and sweet pies make their way over. And as you would expect from this melting pot of a country, we took it and decided that pie was an American treat.

I have no business ever being a history teacher.

Today, I’m going to take to take you into one hole you’ll never want to get out of – The Pie Hole in DTLA Arts District! 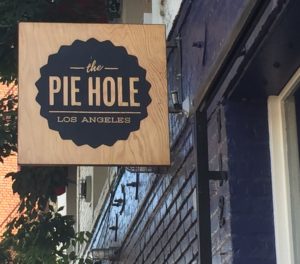 Whenever my friends from outside of LA are coming to town, The Pie Hole is always at the top of my “must-eat” list for them. Consistency with a brand I love is so important to me, and The Pie Hole nails it every time.

I’m a gigantic fan of their Maple Custard, Earl Grey Tea, and Mexican Hot Chocolate, but for this post, I decided to try other favorites, and a couple of the savory pies as well. 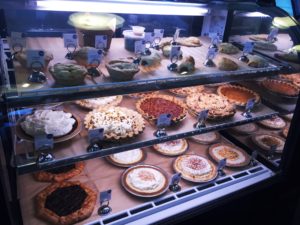 Upon this visit, I got to chit-chat with owner Lindsay Hollister. Lindsay runs The Pie Hole with her husband, Matthew Heffner. Their inspiration for opening their shop was inspired by the amazing pies Matthew’s mother, Becky Grasley, baked for them. Right after Lindsay took a bite of her mother-in-law’s apple pie, it inspired her to pursue owning a pie shop.  For a while, it seemed like a pipe dream, until 2010 when they got their first investor.

After lucking out on a Craigslist search for space in DTLA Arts District, they opened in 2011. At that time this area was on the gritty side, but they decided to take a leap of faith on the space. To this day, The Pie Hole is there, and it’s become an LA favorite for myself and many others.

What separates them from many other businesses is that a lot of thought goes into all of the ingredients. They do not compromise on quality, and you can taste it in the pie and their coffee. 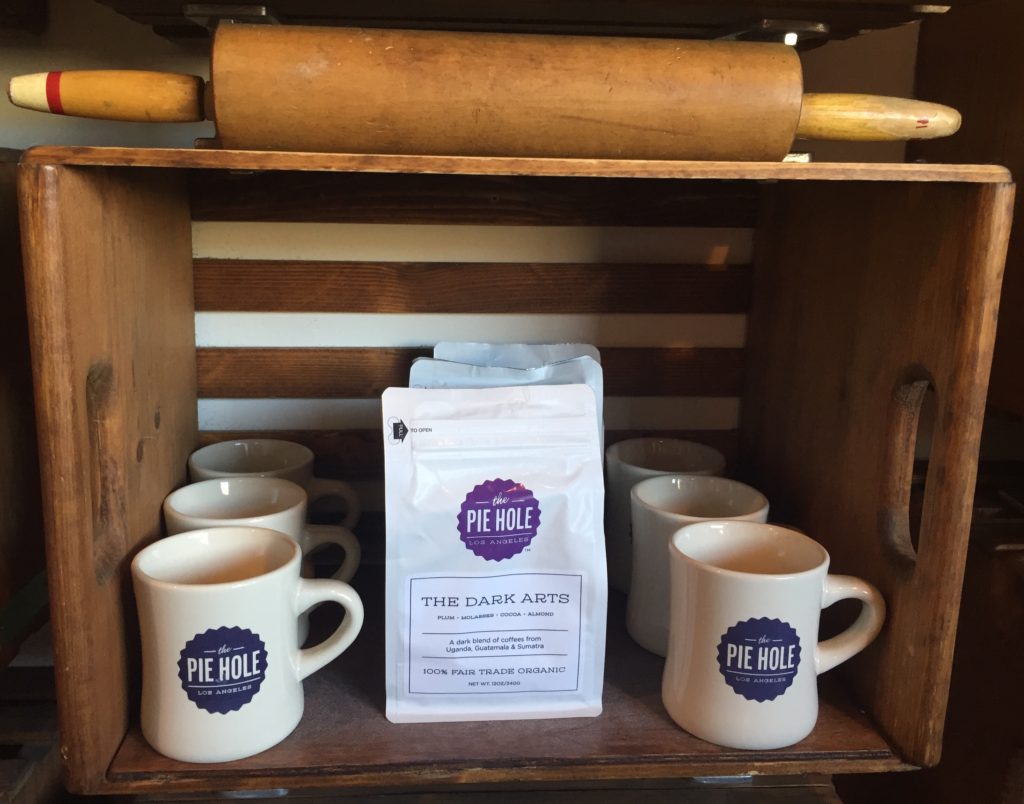 You can’t have a slice without coffee. The Pie Hole offers a light, medium and dark brew. I went with the medium and to quote Agent Dale Cooper (Twin Peaks) “A Damn Fine Cup of Coffee!” 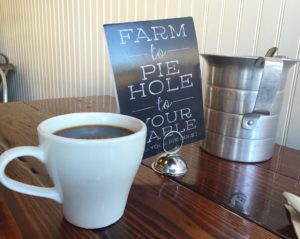 The coffee is roasted locally in small batches to keep the quality in check. Lindsay makes sure only to use beans that are fair-trade and organic. She also stressed to me how she only works with certain farms to make sure employees are fairly treated with fair wages. This is why it’s so nice to go outside of a major brand!

Another fun fact about the beans they use is that all three blends can be used as espresso beans, it’s all in how to grind it. 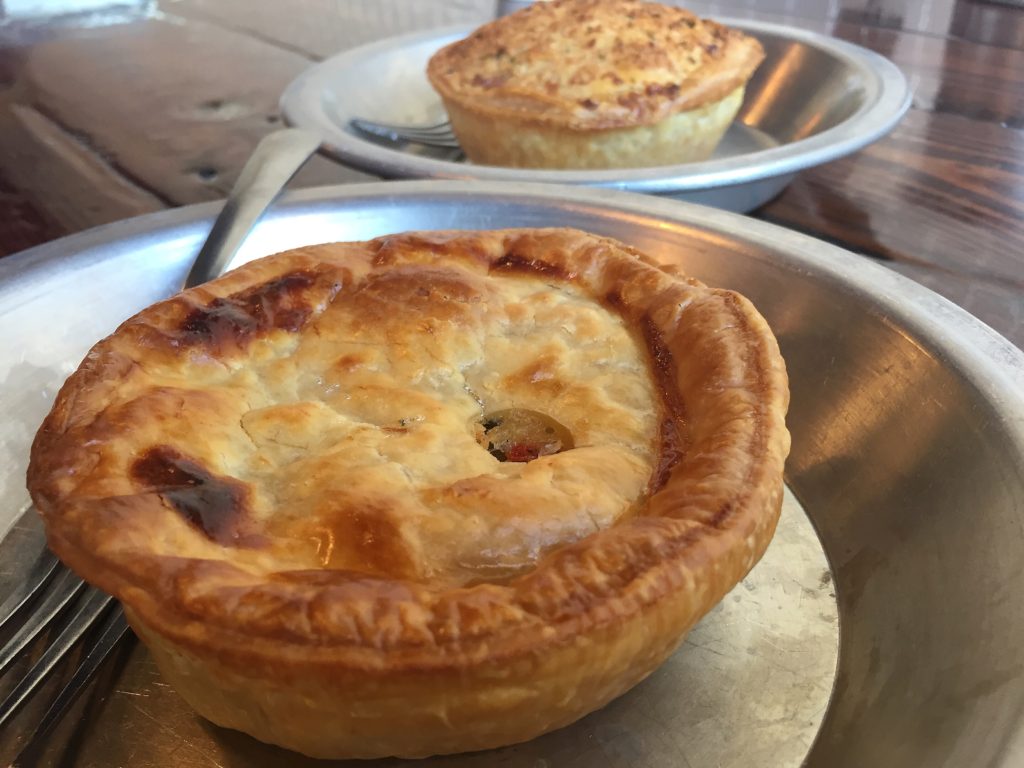 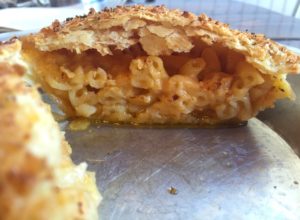 I started off with two savory pies. I went for the Chicken ‘N Cornbread and the Mac ‘n’ Cheese. The Chicken ‘N Cornbread reminds me of an improved chicken pot pie, which even in LA heat, I will crave. The crust texture is crisp, flakey and buttery and dense in the places you want it to be. There is a brothy chicken gravy with the chicken and bell peppers. So comforting. So delicious.

The Mac ‘N’ Cheese pie is so good; I think it should be featured on the Food Network! This pie is packed with mac ‘n cheese as the filling, and the top crust is dusted with herbed bread crumbs. It may feel silly to eat noodles in your pie, but trust me, it’s worth the treadmill session. 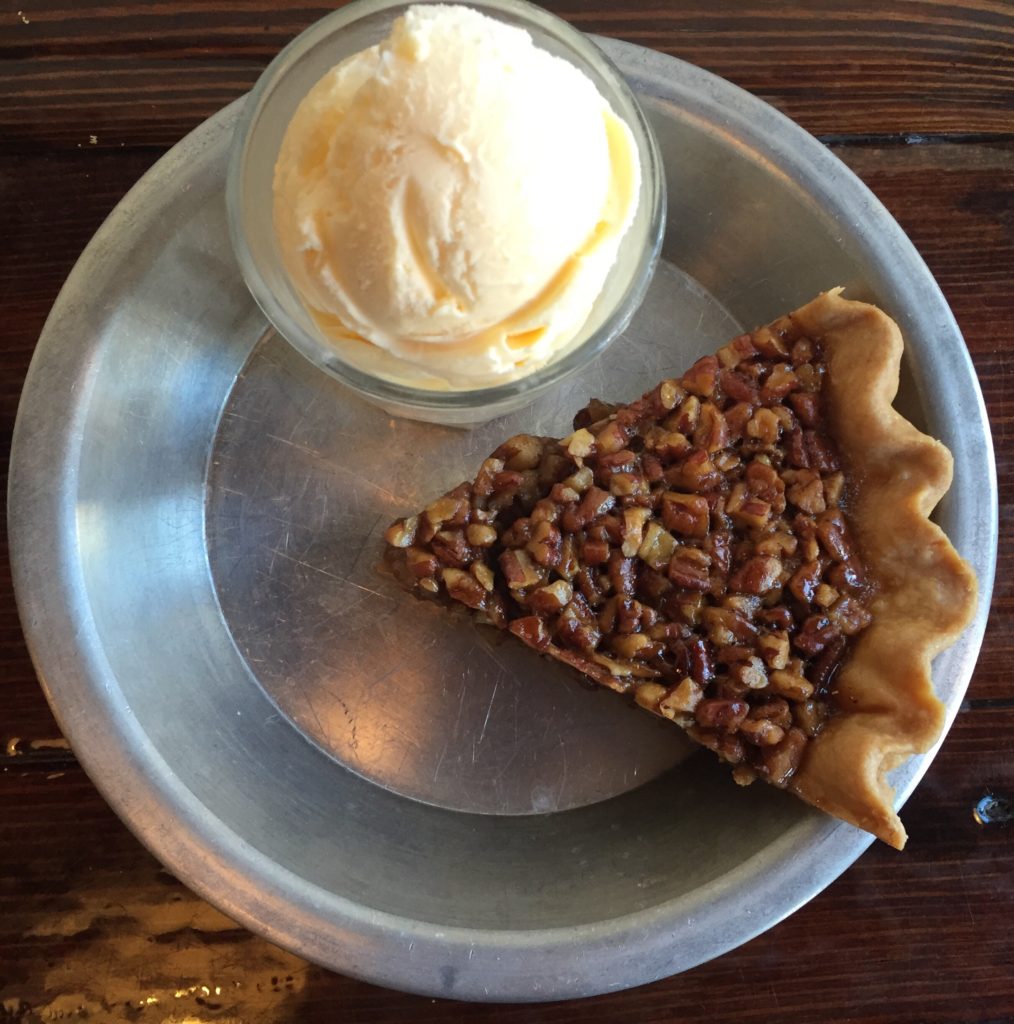 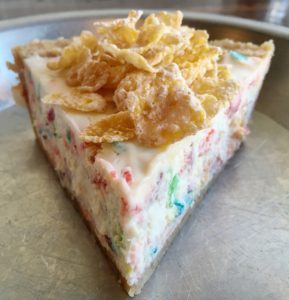 I cannot believe I hadn’t tried the Salted Caramel Pecan before. It’s without a doubt, the best pecan pie I’ve ever had. The consistency of the filling was perfect, and the flavor is salty and sweet. I did get this one a la mode, and it was just beautiful.

I also ordered the Cereal Killer Cheesecake. This cheesecake had Fruity Pebbles cereal in the filling and topped with Corn Flakes. That cream cheese filling has the perfect amount of sweetness to it. The graham cracker crust is thinner than many cheesecakes I’ve had in the past, but was great. It allows the filling to shine.

The Pie Hole has expanded into three other locations in the Southern California area. Future locations will include the Westside (October 2016), and Lindsay hopes to open in the Valley. She is also expanding the business to Japan. The menu won’t have the exact items, to keep up with what is local and in season. A Matcha Green Tea pie will be an absolute must for them though.

The Pie Hole is bringing the love of pie and coffee to Southern California locals. We’re very excited to see how they grow. I have a feeling the options for expansion are infinite for these pies.