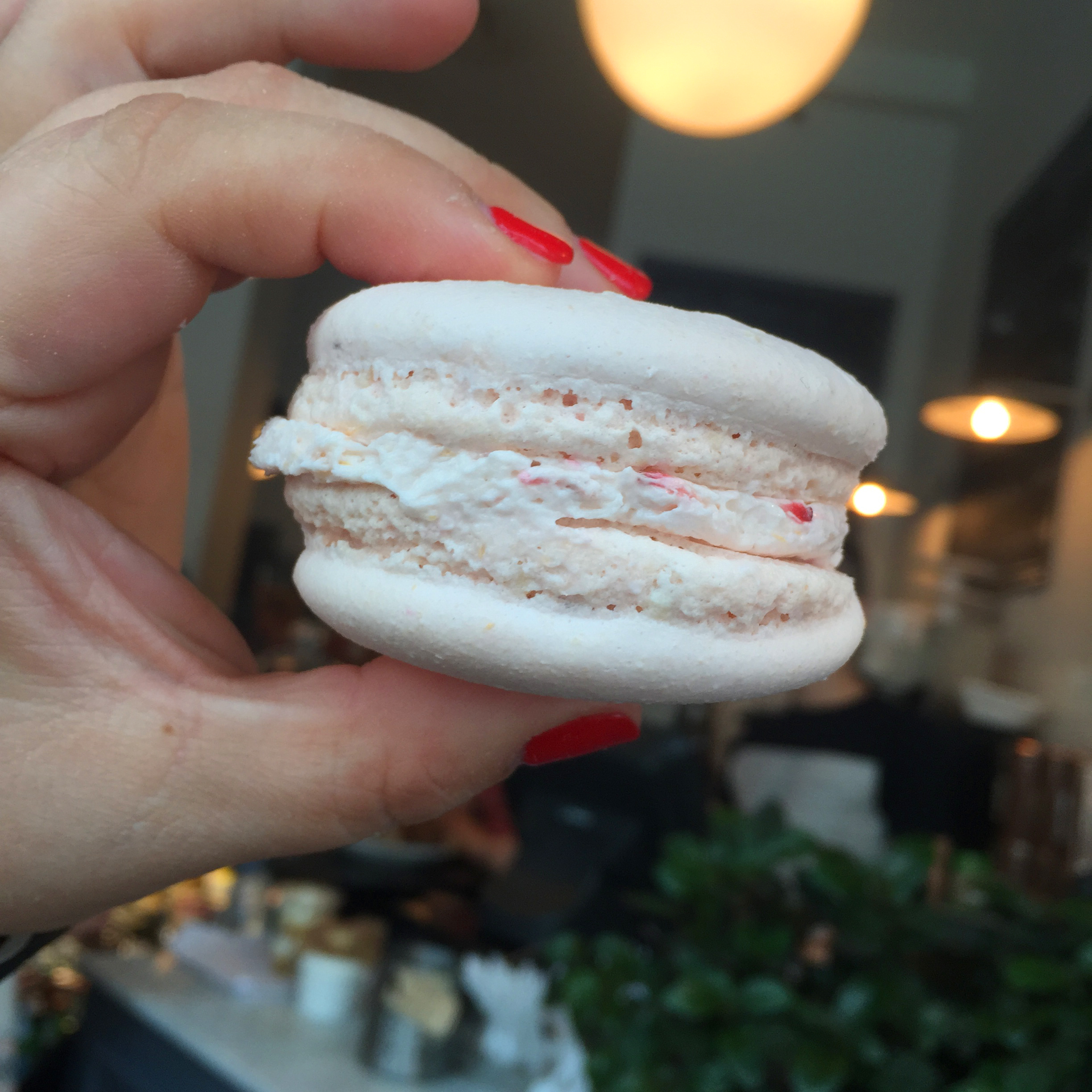 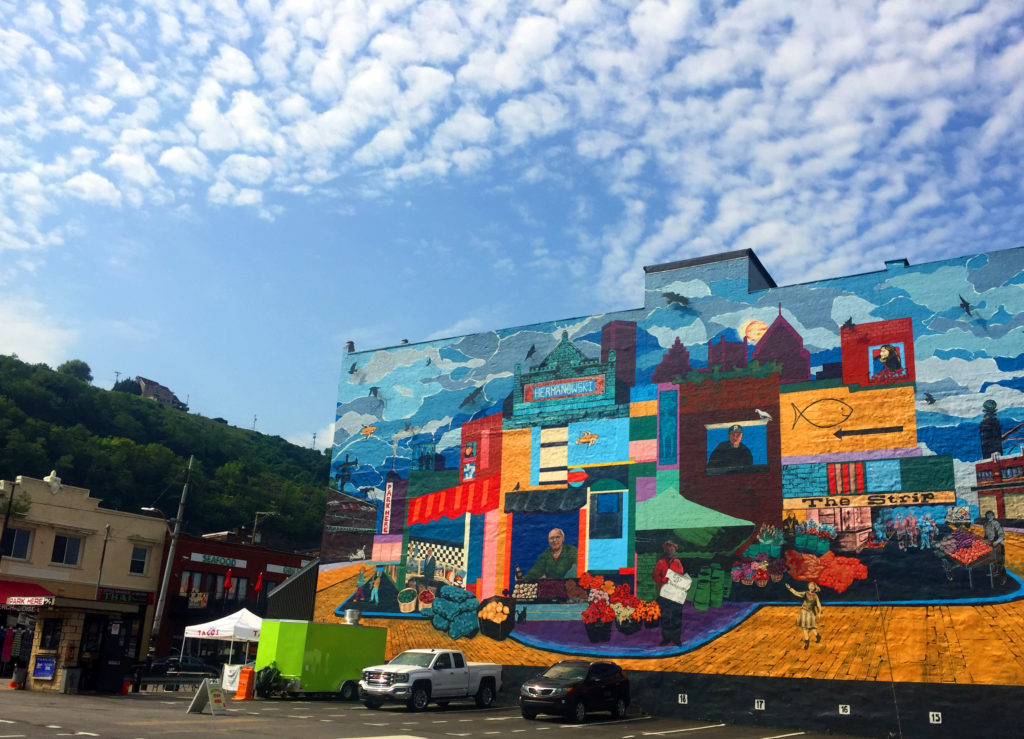 The Steel City–Pittsburgh, PA–is known for professional sports teams, bright yellow steel bridges, and ketchup, but did you know there is a bustling foodie scene there? Zagat even declared Pittsburgh to be their number one food city of 2015… and Zagat knows a thing or two about food.

When I traded my snow boots for sunglasses and moved west in 2011, I was more than a little sad to be trading the Pittsburgh Strip District for the Las Vegas Strip. Sure, one might be packed with neon lights and slot machines, but the other is home to wheels of cheese, buckets of olives, and fries on sandwiches. The struggle is real, folks. Still, you could always click here and go online for the slots whilst enjoying those meals, right? If you love casinos, then you’ll love the Las Vegas Strip. It’s known for its many casinos. That’s why so many gambling fans tend to visit Las Vegas. As I’m not into gambling, Las Vegas isn’t that exciting for me. However, I can see why some people do get excited. Gambling fans would love it here. They’d probably need some practice beforehand though. There are some professionals that visit these casinos, so visitors need good casino skills. Most of them will use a casino recommended by Best-casino.net before they arrive. This allows them to brush up on their skills.

Luckily, I get to spend a few days in Pittsburgh each summer. I normally stay at a hotel in the Cultural District, which a great location for checking out shows at one of the theaters, or my favorite – The Heinz History Center. Most importantly, it’s a prime location for restaurants and the aforementioned Strip District.

This year I only had one day to eat explore. Here’s how it went down: 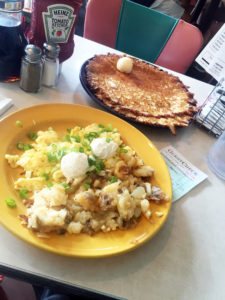 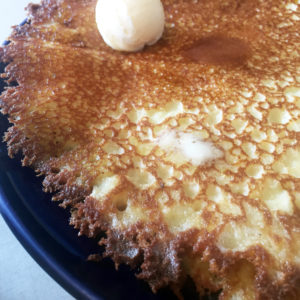 First thing’s first: Pamela’s is CASH ONLY. The first location opened in the Squirrel Hill area of Pittsburgh in the late 1970s, and they have expanded to 6 different locations. This was my first visit to the Strip District location, but looking around the cute little dining room, hotcakes (pancakes) seemed to be the way to go. I also wanted to try Gail’s Favorite Eggs (scrambled with cream cheese and scallions) and the Lyonnaise style potatoes, so the server suggested The Morning After special, and upgraded my eggs for a small up-charge. It takes a lot to embarrass me, but when my breakfast came out and took up THE ENTIRE TABLE, I felt a bit flushed. Of course, that could have just been excitement as my eyes transmitted to my brain that these hotcakes looked AMAZING…and they were. The outer edges are crispy, almost like a cookie, while the center was fluffy and soft (not unlike my own center). I’m not the only one blown away by these hotcakes — President Obama tried them while on the campaign trail, and later invited the owners to prepare them for 80 veterans at a White House Memorial Day breakfast. GET THESE… just remember to bring cash. 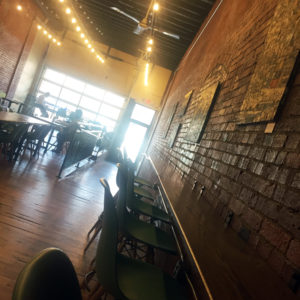 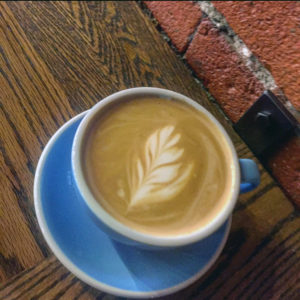 I skipped coffee at breakfast so I could fulfill my latte art needs, and I was not disappointed. A simple coffee shop, 21st Street is an unpretentious place to read a newspaper, study, and enjoy a coffee or tea. I went with an anything-but-boring latte, but was intrigued by their Fizzy Tea – Kilogram Tea’s Lemongrass Green Iced Tea, carbonated and served on draft-next time! 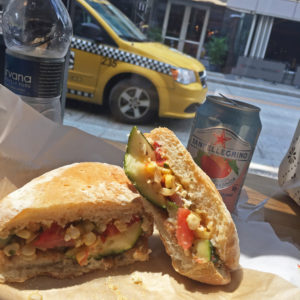 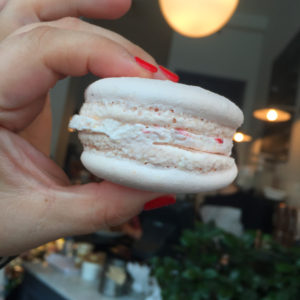 I fell in love with Bluebird Kitchen on my last visit to Pittsburgh, so much that I broke my own rule and ate there twice in the same week. Their menu changes often, but they serve breakfast and lunch options including hot and cold sandwiches, soup, salads, and a daily variety of vegetable and side salad options. They also have a dessert case that is drool-worthy. I ordered July’s Vegetarian Sandwich, which was loaded with corn, zucchini, pickled onions and more, crammed into a perfectly chewy ciabatta bread. I also ordered one of their jumbo strawberry-peach macarons, and can I tell you a secret? I devoured it, and ordered two more…one for my significant other, and the other one for me (obviously). So flavorful! I was pleasantly surprised by the chunks of sweet, juicy peach in the filling. I have yet to have something from there that is not delicious… and I’ve been there 3 times now, so I’m clearly an expert. GO, for breakfast, for lunch, for a snack… just go. 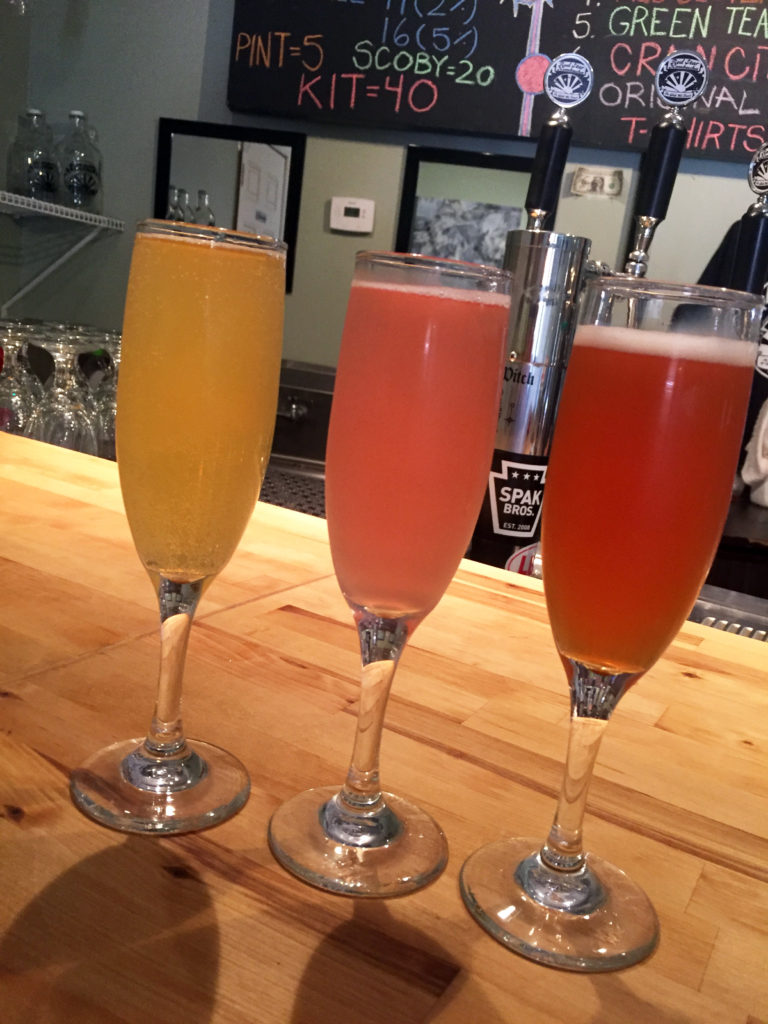 Having recently fallen in love with kombucha, you can imagine my delight when I was wandering through Pittsburgh’s Market Square, and saw a sandwich board for a kombucha bar. Yes, you read that correctly: A KOMBUCHA BAR! Take my money! After a delightful lunch, I hung around Market Square watching some live performances that were going on in the square that afternoon. It was very hot and humid, and I was getting quite parched… tart, effervescent, and refreshing kombucha to the rescue! Much like a bar, I climbed a stool and the booch-keep filled me in on all the varieties they had on tap that day. I decided to try a flight of their Super Sour Barrel Aged Ciderbuch, Hopped Black Cherry, and Cran Citra Hop. All three were delightful, the Hopped Black Cherry being my favorite. Their kombucha is raw, alive, and unfiltered, and the flavors I tried were between 2.5-5% abv, so please booch responsibly. 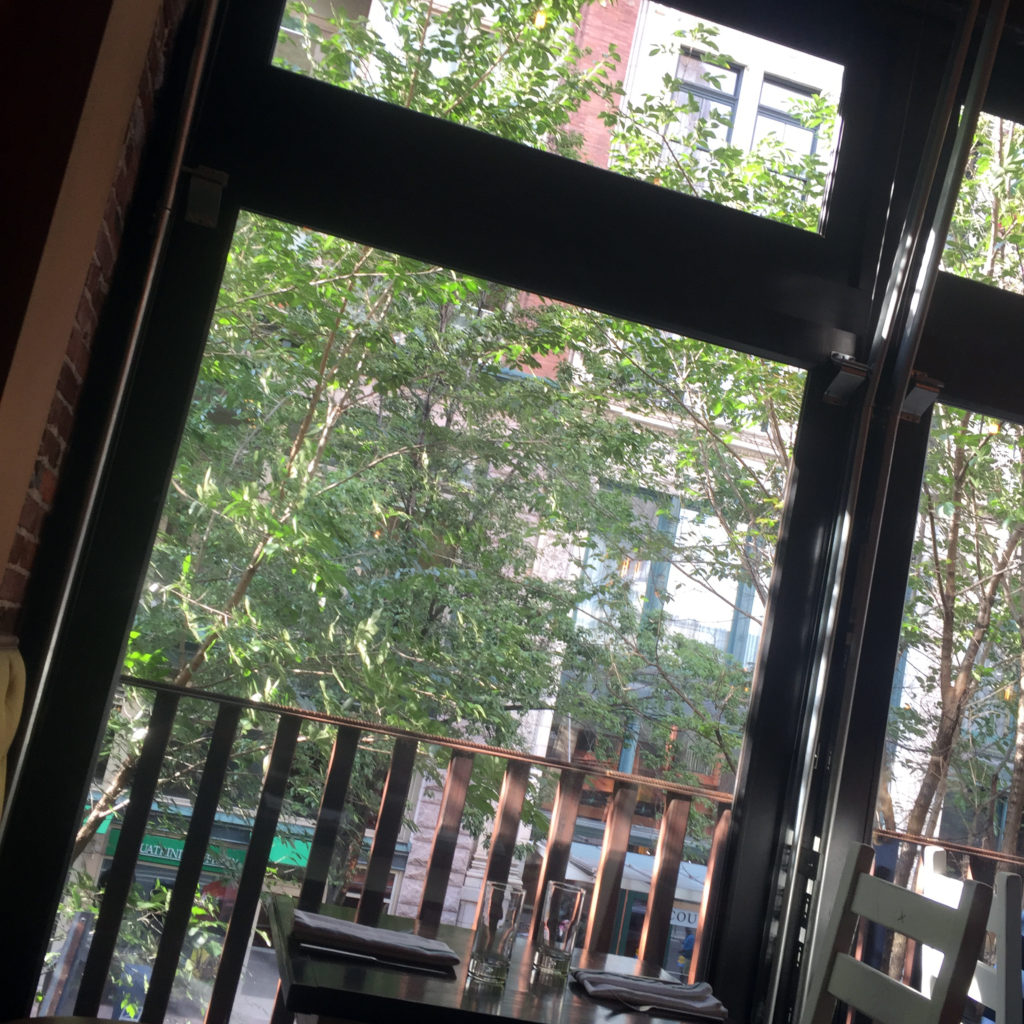 I mentioned I liked to stay at a hotel in the Cultural District because of its proximity to great restaurants… Sienna Mercato is directly across the street from that hotel. That potential food coma isn’t going to scare me!! Sienna Mercato offers three unique options. The first floor, Emporio, offers a variety of delicious meatballs (and veggie meatballs), served up several different ways. We normally go there because I am slightly obsessed with their “government cheese” sauce. The second floor, Mezzo, is a more sophisticated option, featuring wines, charcuterie, pizzas, and pasta. Lastly, Iltetto is a rooftop beer garden, with a variety of creative sounding bar snacks-fried Brussels sprouts with smoked maple goat cheese anyone? (YASSS!) We decided to try the second floor – Mezzo. (Side note: Mezzo accepts reservations, which is helpful when there is an evening performance at one of the theaters.) 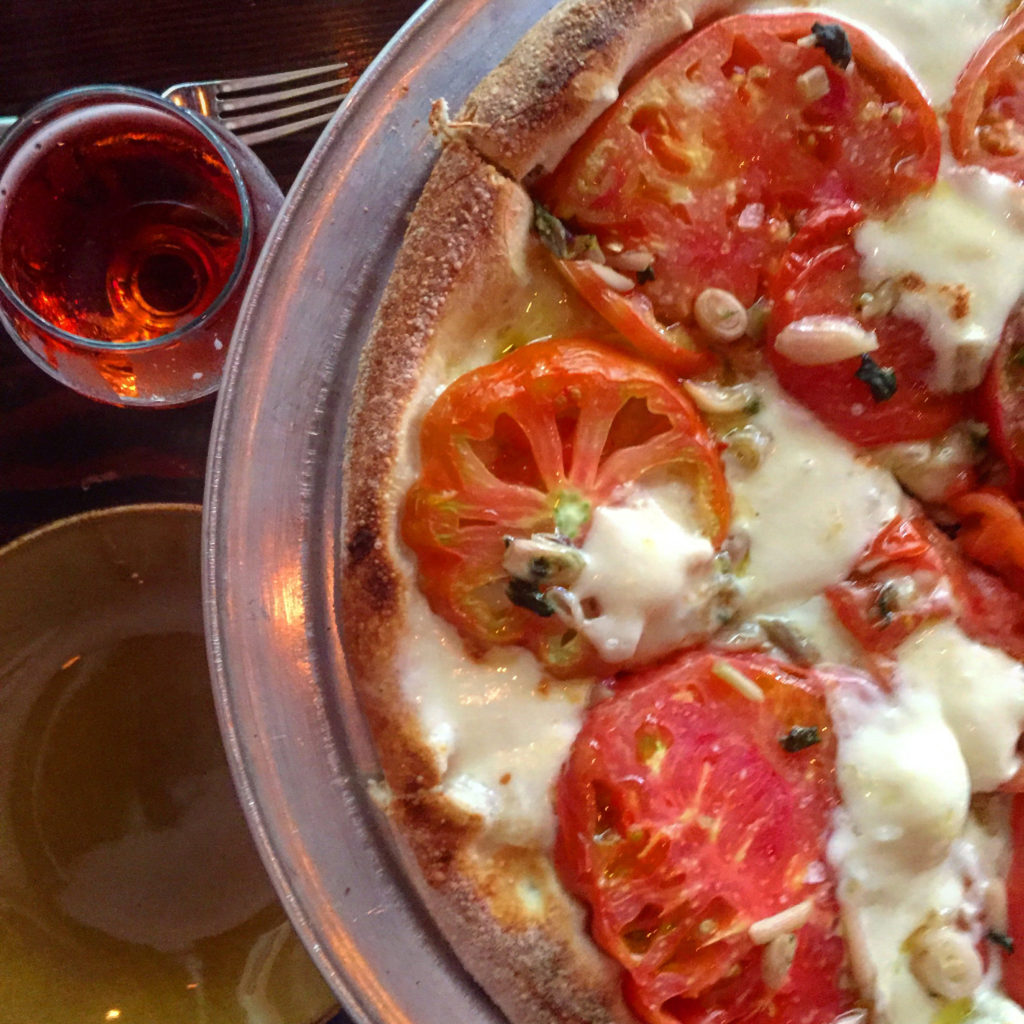 While they had an extensive wine list, the kombucha from earlier in the day had left me wanting something tart, so I tried Southern Tier Brewing Company’s Imperial Cherry Gose – if you live in their distribution area, and like sour ale, this is one to order, so good! Their menu changes frequently, as they use seasonal ingredients. We chose a pizza as an appetizer, with heirloom tomatoes and pickled ramps. Growing up in Appalachia, ramps were a cultural staple. As a child, I was repulsed by them (very strong wild onion/garlic smell), but as an adult, I have come to appreciate their pungency. 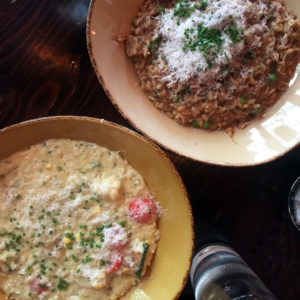 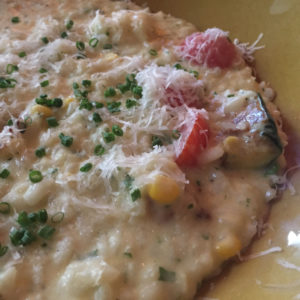 I ordered the daily vegetable risotto, which was loaded with zucchini, corn, tomatoes, and topped with fresh chives and grated cheese. My SO ordered braised pork risotto with peas, pancetta, and Parmesan. While both were delicious (and huge), we both preferred my vegetable dish. I wouldn’t have thought to add sweet corn to risotto, but carbs on carbs don’t ever let a girl down. After a day of what can only be described as food hedonism, I had to pass on dessert this time, but previous experience has taught me that the Pecan Balls from Emporio (first floor) are the way to go if you have room-vanilla ice cream, rolled in pecans, drenched in hot fudge…just as amazing as it sounds.

My one-day visit barely allowed me to scratch the surface of all that Pittsburgh offers, and I’m already looking forward to my next trip.

For more ideas on what to do, and of course where to eat in Pittsburgh, “yinz” can check out my adventures from last year on my blog, The Sunday Funday.