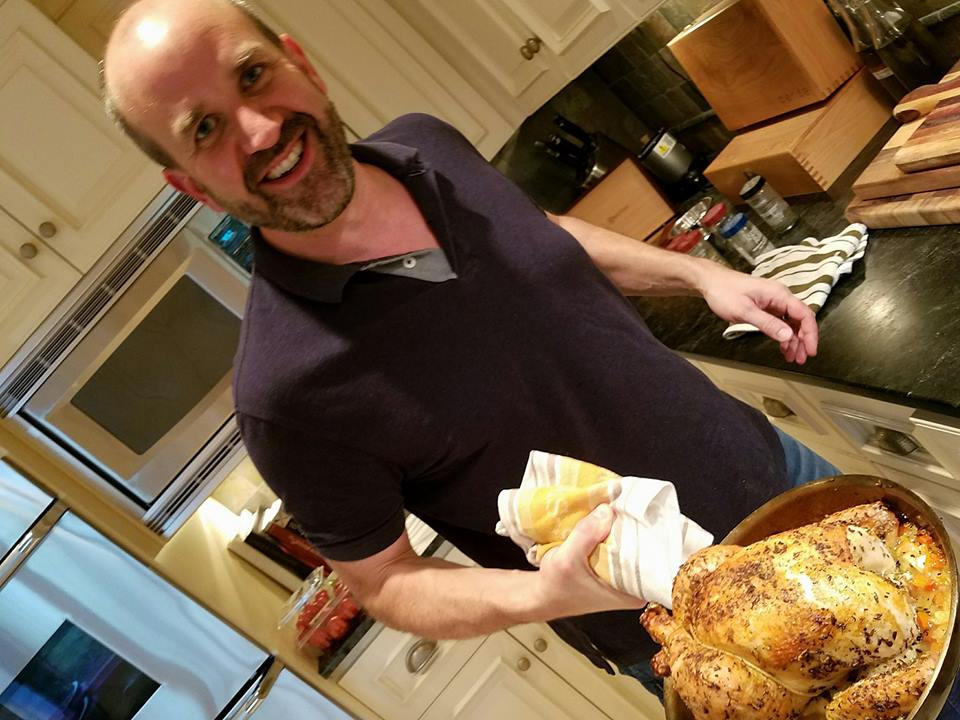 Dr. Mark Deuber of RHOD Cooked For Me!

A few months ago I caught wind on Twitter that Heather McDonald was coming to Dallas to do a set at the Hyena’s Comedy Club at Mockingbird Station. 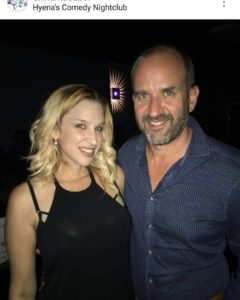 One of my absolute very favorite comedians David Jessup is usually the featured performer at that club, so you didn’t have to tell me twice to go, plus word on the street was all the Real Housewives of Dallas were going to be there. Let me say the night did not disappoint.

After Heather came out and did her set, everyone stood up and started to mingle a little bit. I stood up and began to walk around thinking I would take a few more pictures of people talking after the show and then I just happened to back right into guess who? None other than Dr. Mark Deuber, husband of the incomparable Cary Deuber.

He and I had been friendly on Instagram and Twitter since the show first started. He had seen that I had written about the show and wasn’t a “horrifying blogger type” like they were used to. I was very excited to see him in person. We chit chatted a little bit about Heather’s set, The Real Housewives Of Dallas and then all of a sudden it just came over me, (“I MUST EAT HIS FOOD. THE FANS MUST KNOW IF IT’S GOOD OR NOT. THIS IS MY DUTY”). Mark saw the look on my face like I wanted to ask him a question but was hesitating.

“Go ahead, ask your question.”

I sort of blurted out:

“I don’t suppose there’s any way you would ever consider cooking for me and I could cover it for Girls On Food? I know there’s a lot of Bravo fans that would love to see that side of you! But I’m sure you’re very busy.”

Mark could not have been nicer about the request.

“Oh yeah, I would love to do something like that! I’ll have Cary give you her email address, and we’ll set it up!”

Then I got to meet Cary, she was the sweetest thing ever and can I also say, as gorgeous as she is on TV, in person the girl is absolutely #flawless, warm and genuine. I told her what we wanted to do and she seemed to be all about it. We exchanged email addresses with promises to get in touch soon and get all the details together.

The date was set for this past Saturday night. I can only imagine that he decided to take pity out on poor little ‘ole me, block out two and a half hours to prepare a next level, gourmet, three-course meal for me. He just told me “We’re not going to cook the lobsters yet, we’re going to kill em first.” 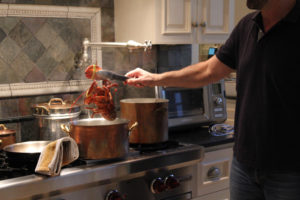 The first course was Sous Vide Lobster. I learned about sous vide when I attended a media dinner put on by Richard Chamberlain of Chamberlain’s Steak & Chop House a couple of months ago. Sous vide is a method of cooking food sealed in airtight plastic bags then placed in a or a temperature-controlled steam environment for longer than normal cooking times. The result is the most tender, juicy, delicate, delicious piece of meat- whether it be fish shellfish or beef- it doesn’t matter. I asked Mark how easy it was to cook meat this way and he said it’s easy as long as you have one of the best vacuum sealers for sous vide, otherwise the meat just doesn’t cook correctly. 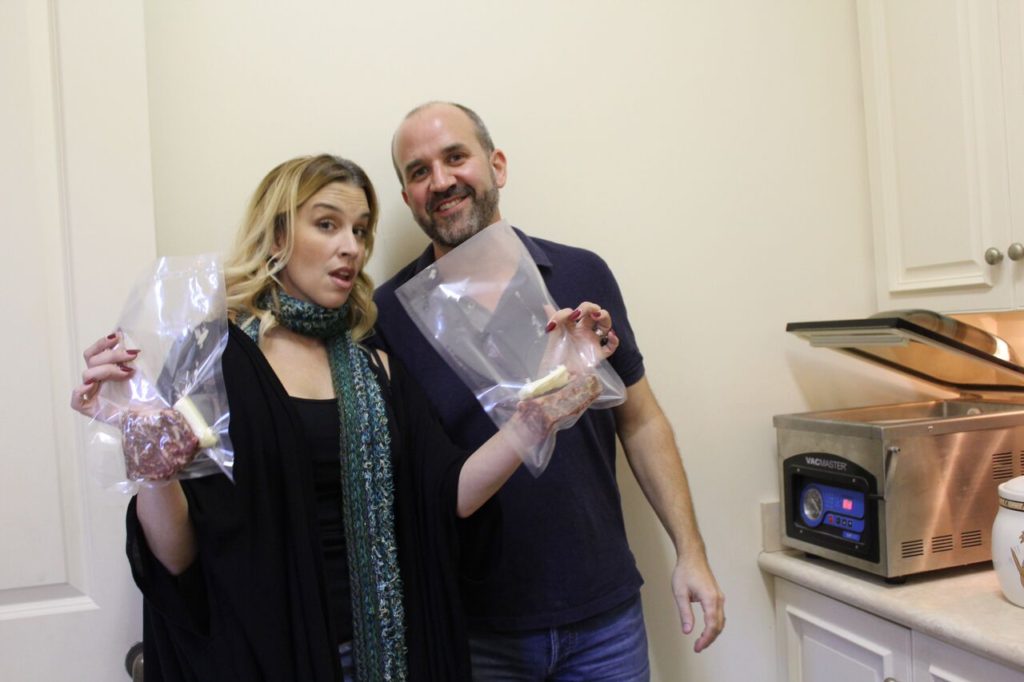 Sous vide cooking is what’s up. That’s what I’m saying.

I asked Mark how a man, as busy as he is, can find the time to cook this well? I had just assumed that most surgeons ate out after every shift? Surgeons have no spare time.

Mark explained to me that as he was growing up as a kid dinners were prepared by his mom and he was always eating at home as a family (kind of the way my childhood was). Another thing Mark and I have in common is he loves to go to a restaurant and order a fabulous meal and then come home and try and figure out a way to recreate it. 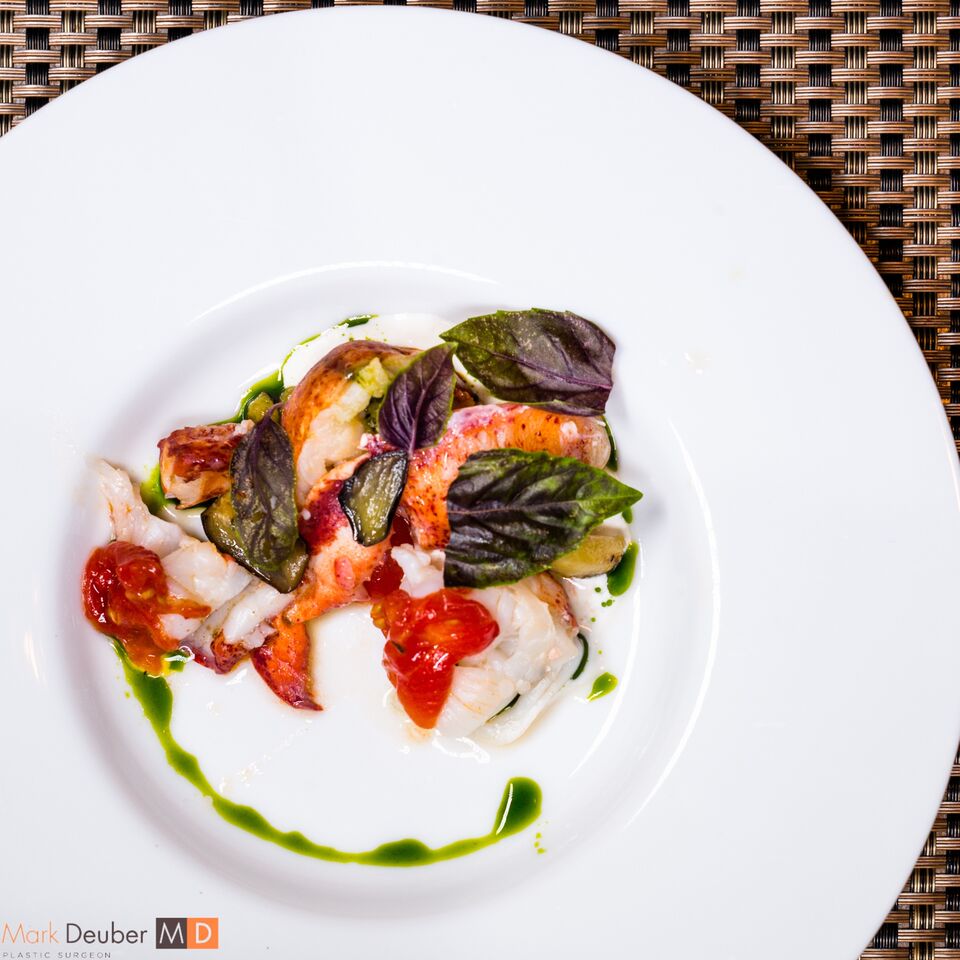 Butter poached lobster with eggplant, tomatoes and burrata. Inspired by Marea in NYC.

Next, Mark pulled out two amazing pieces of beef that were 50% Wagu/50% Kobe, with marbling that made my mouth water. Served with pureed parsnips and kohlrabi- which I’ve never had before but, oh my Lord, it is superb. Apparently, it is IMPOSSIBLE for me to remember to shoot the steak BEFORE I eat the damn steak. It’s just never gonna happen. The next course was all the proof I needed to know that this man is absolutely after my own heart. It was an old-fashioned roasted chicken slathered in butter, anise, fennel, thyme and garlic, on top a bed of mirepoix. It was amazing. The entire house smelled incredible. The side dish was mashed potatoes that were so creamy they tasted like clouds. The method that he used to crank out these bad boys was so innovative to me- I would never have thought of it in my kitchen. 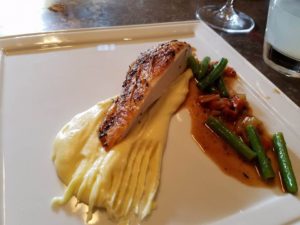 He boiled golden potatoes then ran them through a grater to make them like cylindrical. Then he mixed in a little heavy cream and pushed the mixture around in a sieve. Then pushed it through the sieve into a pot with more warm heavy cream. Check out the two videos we made on the process here and here.

They say don’t meet your heroes. The Deubers are a class act. This was an experience that I will never forget and I cannot wait to be served by the good doctor again in the future. Chefs of Dallas, look out. If Dr. Deuber ever decides to change professions; Bravo may have to transfer him to Top Chef.

All in for All Granola

My career identity is at a bit of a crossroads these days. I have been a salesman since I was eighteen years old, I’ve sold cars, diamonds, clothes- you name it. I’ve always been fairly successful and I love sales in general, but, living in the South Dallas suburbs, every job I’ve ever had has come with an excruciating, hour(s) long commute in Dallas traffic and a schedule that allowed for practically zero family time. For years I’ve been missing precious hours with my family, sitting at a desk, staring at their photograph. It got to the point where I was literally crying everyday, missing them. About five years ago I was diagnosed with Graves Disease, a thyroid condition that causes your thyroid to produce way too much hormone. (Your thyroid controls just about every function of the body.) In 2013 my health took a really bad turn. I had been working while sick for too long. Then, last year, I was forced to leave my job in Sales and Marketing due to the illness. My family and my love of cooking for them are the things that help me through all this health nonsense. Fast forward to today, by the Grace of God, my health is finally improving and I’m now a stay at home mom. My blog www.SouthDallasFoodie.com chronicles my adventures in becoming a food blogger aND I also share Dallas area restaurant and entertainment reviews. While I’m not a professional Chef, I did have the privilege of being taught the fundamentals of cooking by three of the best Chefs that ever lived; my mother and her parents. They raised me on huge, southern style Thanksgiving dinners, stews, chili’s, fried chicken, chicken fried steak and country gravy. In my kitchen I like to create classic dishes that are simple and delicious. I like to take classic recipes and use simple substitutions to make them uniquely mine. I love dining out and the Dallas restaurant scene has plenty to offer but nothing frustrates me more than spending 30 dollars on a plate that comes out with three, teeny, pretentious bites. I look for the places in DFW that serve decent sized portions of delicious food, for a fair price with a good selfie mirror in the bathroom. And also, I’m obsessed with 90’s sitcoms, coffee, pop culture and cats. :)