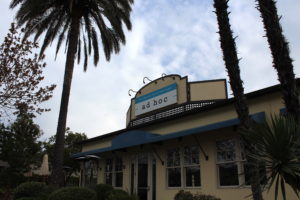 Recently I was asked to cover Yountville Live and although any time off from the event was limited, I couldn’t resist sneaking a few places in.

My experience at Ad Hoc was made extra special with the manager allowing me to go behind-the-scenes, I wanted to share with all of you. So put on your stretchy pants for a family-style feast!

Chef Thomas Keller is known for his Michelin-starred restaurants in Yountville Bouchon Bistro and The French Laundry but Ad Hoc is his casual dining venue. Having been inundated with finer dining on this trip, it was relaxing to chill out and enjoy feel-good food.

Fun fact: Ad Hoc opened as a space that was intended to temporary, while they came up with another concept. Locals loved Ad Hoc so much, they decided to keep it as is. The dinner and brunch menu changes daily at Ad Hoc, so be prepared for that if you dine here on multiple occasions. This particular set menu was priced at $34 and there are supplemental fees for beverages and egg add ons.

For beverages, there is a full bar, beer and wine. I stuck with my all-time favorite: rosè. I was blown away to see a $10 glass on the menu (I’m so used to LA prices) the Grenache Gris, Domaine de Figueirasse (2015) is crisp and bright, it paired perfectly with the brunch.

When I was there, the brunch menu kicked off strong with Yogurt & Granola. This vanilla yogurt is so smooth it could pour out of the glass container with ease but it was still rich and creamy. The yogurt was paired with blueberries, raspberries, apples, red grapes and granola. The apples had the appearance of being candied but were still tart. I found out they soak their apples in a lemon juice prior to serving, giving it the candied look.

The Buttermilk Fried Chicken is everything I hoped for and so much more. The fried buttermilk batter is crispy, crunchy and the meat inside is juicy. Today’s fried chicken pieces were topped with a thick “hoc sauce” gravy, that provided a creamy kick to the chicken.

Not to be outdone, the Bacon & Chive Waffles that came with the fried chicken were savory and when topped with maple syrup, it makes for a sweet and salty bite. The side of toast provided with the Two Eggs side we added came with a pineapple jam, that was sweet and chunky.

This set menu concludes with Banana Bread topped with a walnut chantilly cream. I loved the chunks of chocolate chips in this bread and the cream was delightful. I probably should’ve asked for an extra dollop of it, but I need to have restraint sometimes. 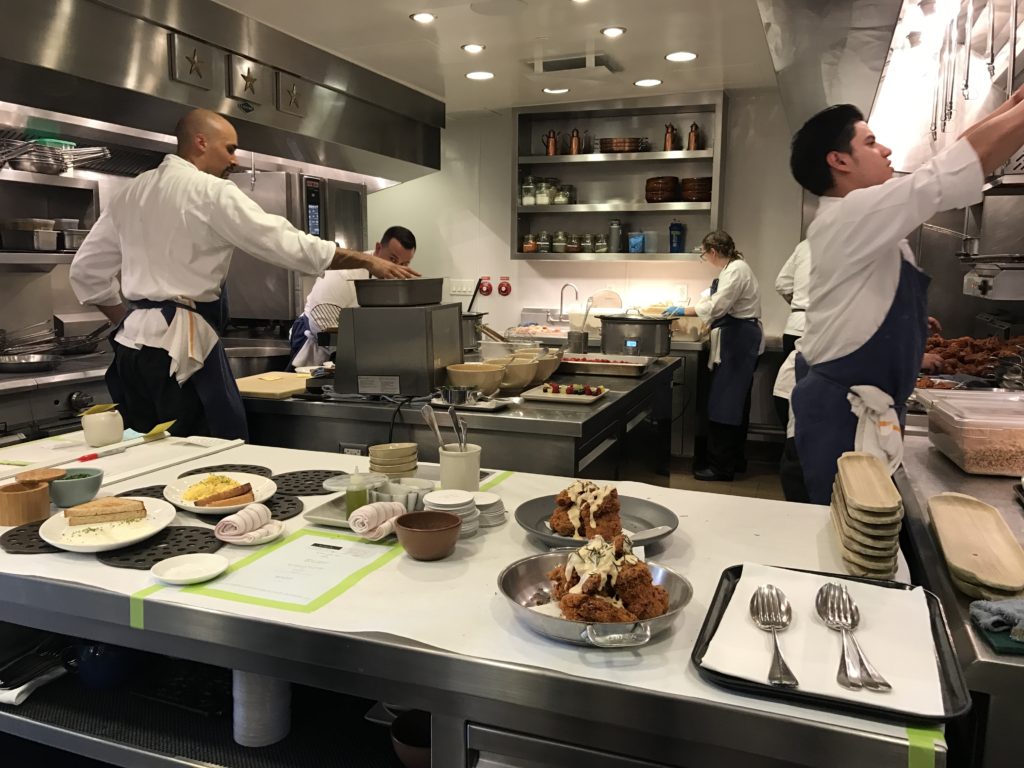 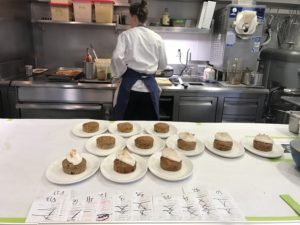 One of the perks of being a Girl on Food is that sometimes I do get invited to see all the hard that goes into my food. I was giddy when the dining room manager, Alexandra, let me tour the kitchen.

Under a clock in the kitchen is a sign reminding the staff to keep a “sense of urgency” in mind. The energy is fast and furious but I could see the staff was as precise with plating and serving as they were quick.

The dessert station is separate from the savory foods and the heat certainly cools off quick just when facing in its direction. At the dessert station, staff is provided with a daily mantra to keep in mind. Today’s quote came from Jordan Peele. “I was raised that emotion is a good thing.”

Thanks to Ad Hoc for making my visit a little extra special for me and my readers!