Music Tastes Good is back, and while here in SoCal the calendars say fall, it felt like summer at this awesome festival. I doubt that I’m alone, but food regularly stirs up humming and melodies from within me so the entire concept brought forth by this festival is truly one I can get on board with.

The lineup was super fun, and I’ve been putting my Spotify to work with some of my new favorites.( (Big Freedia you gave me life!) The culinary experience this year was described as being a “port to port experience”  between Long Beach and New Orleans. Sounds and tastes reflected this experience and showcased the absolute best of these two port cities.

END_OF_DOCUMENT_TOKEN_TO_BE_REPLACED

TANIA: When Alex asked me if I wanted to join her for dinner at Ocean Market Grill in Long Beach, I said, “Hell yes!” even though it’s a bit of a trek for me. We used to be roommates, and now that she lives in San Diego, I gotta get my Alex time in any chance I get!

ALEX: I happened to be back at home for Thanksgiving and was so excited to have the opportunity to check out Ocean Market Grill. This style of a fish shop is one of my favorite things, and since I was an hour and a half closer to Tania than I usually am, I knew I needed her to join me!

It was a rainy evening, and after a quick hug in the parking-lot-turned-swimming-pool we hurried inside. 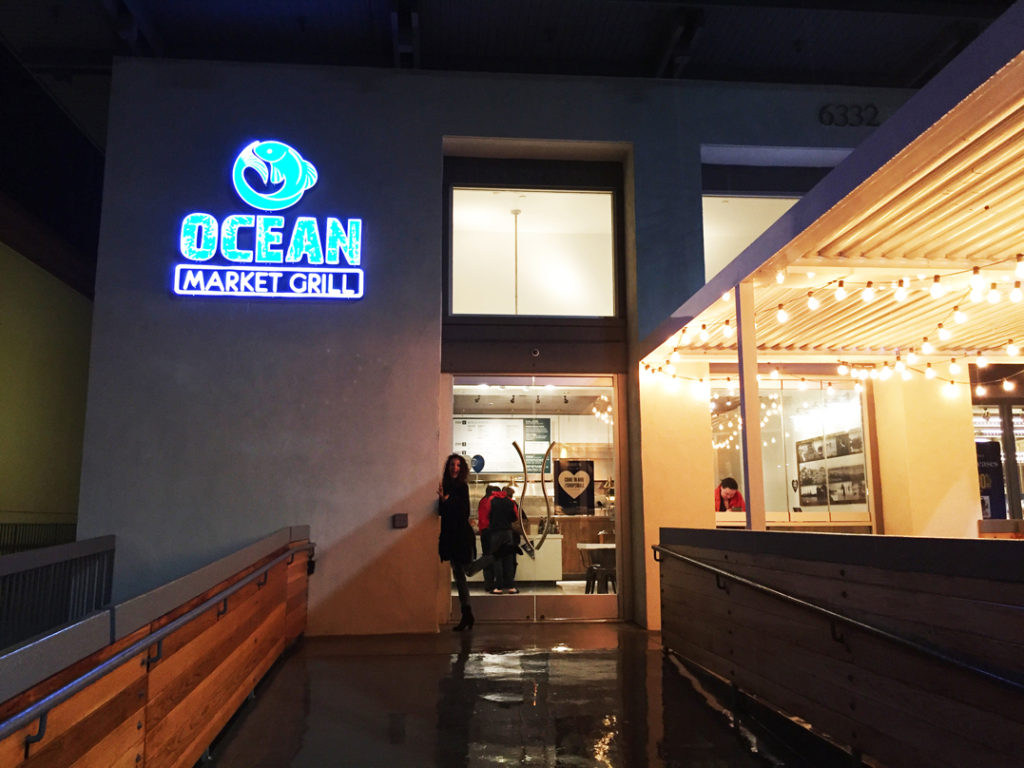 The interior is clean, minimalist, and casual, with nice lighting. They had the place decorated for Small Business Saturday as it happened to be the day after Black Friday. 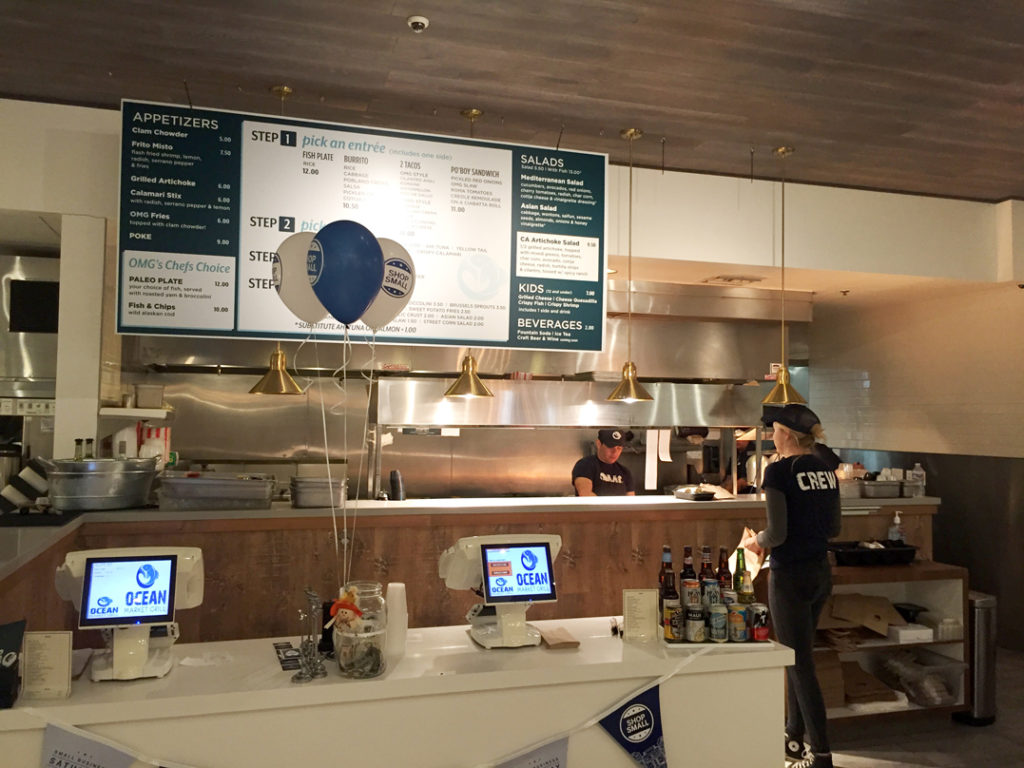 The menu somehow managed to be both simple and expansive, with multiple options of fresh fish prepared with different cooking and presentation styles, seasonings, and sides. Not to mention all the appetizers and salads that are also available!

TANIA: To start with, Alex and I ordered the OMG fries, which are served with a topping of clam chowder and delicious bacon. Alex doesn’t eat bacon, so I was more than happy to take one for the team and finish every last bit! The fatty and crispy bacon bits added just the right amount of salt to go with the creamy chowder on top.

ALEX: As Tania very willingly ate all of the bacon off of these fries for me (what a great friend!) I started digging into the fries, and these did make me say OMG! I’m not typically a huge clam chowder fan, but I could not stop eating these. The fries held their crispiness well, and the addition of red potatoes made these unique and extra delicious! 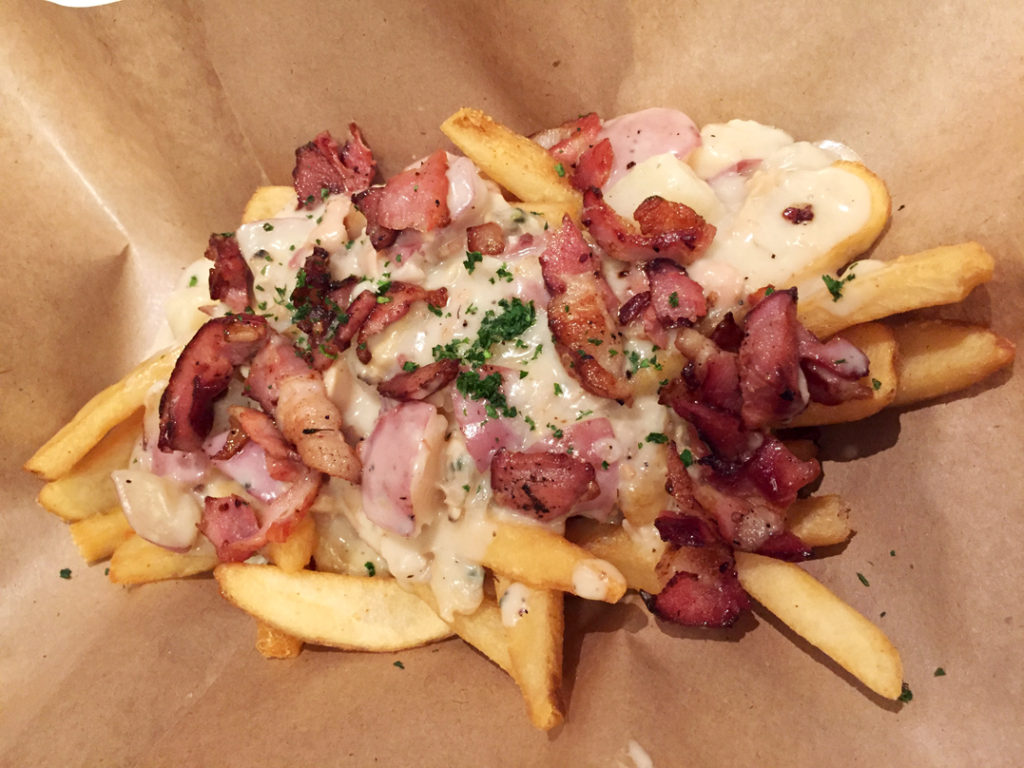 TANIA: For my main dish, I was excited to see that Yellow Tail was an option, as that’s one of my favorite types of fish to eat. The Yellow Tail and Ahi are sushi-grade and come lightly seared. That sounded so good; I decided to try the tacos, one in each style. 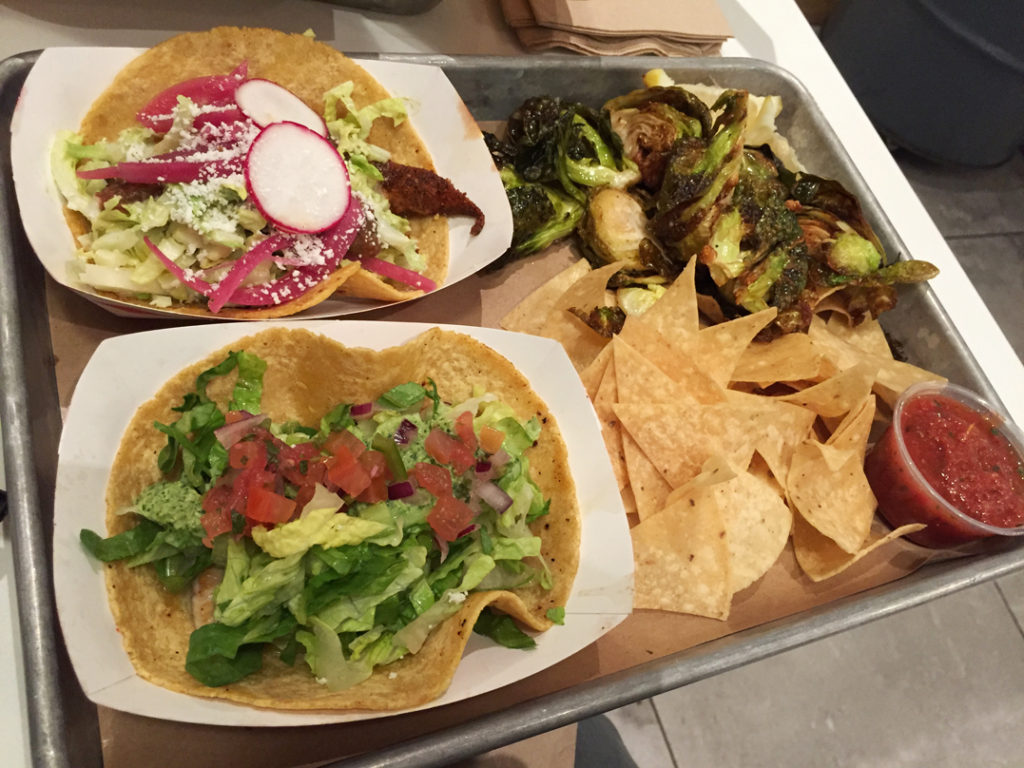 I had the Yellow Tail lightly grilled with garlic butter in an OMG-style taco, served with cilantro aioli, romaine, and Watermelon Pico-de-gallo. This was my favorite taco of the two. It was light, fresh, and had a nice combination of bright flavors. The fish was also wonderfully flaky and tender. 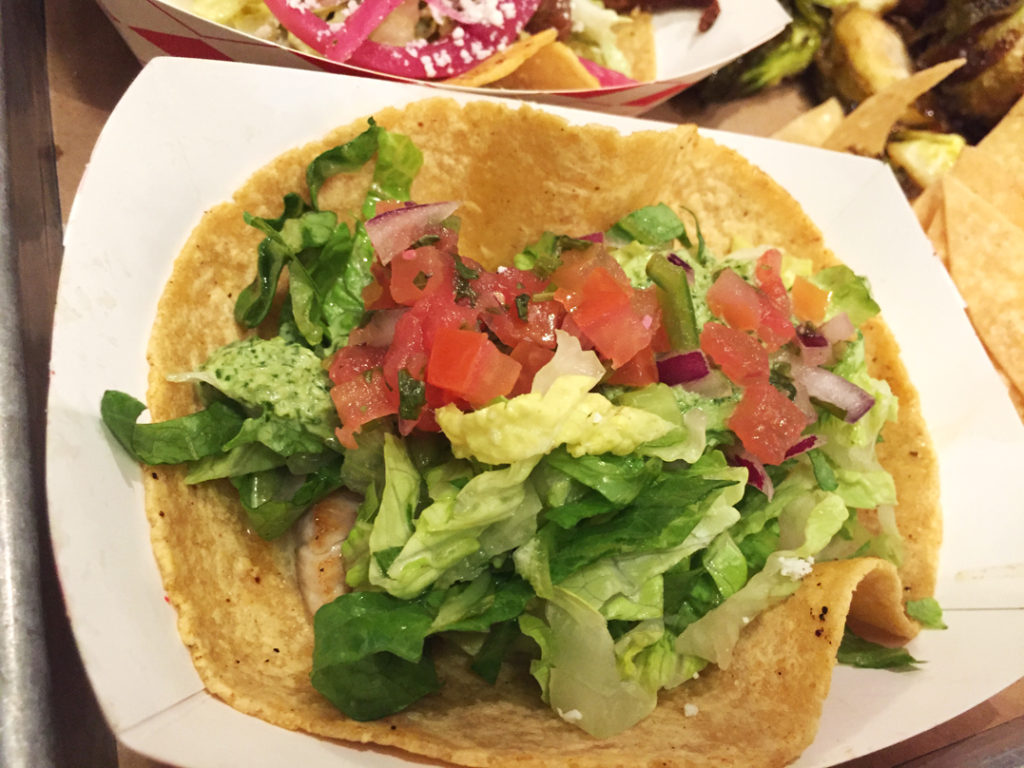 For the Ahi taco, I had the fish blackened and served in a Cabo style taco prepared with Cabbage, Poblano Crema, Salsa, Pickled Onions, and a dusting of Cojita Cheese.  This taco offered a much more intense and smoky Cajun flavor, which was good, but I thought it overpowered the flavor of the Ahi. Next time, I’ll pick a different fish such as Salmon or Rock-Cod to go with this style of taco. 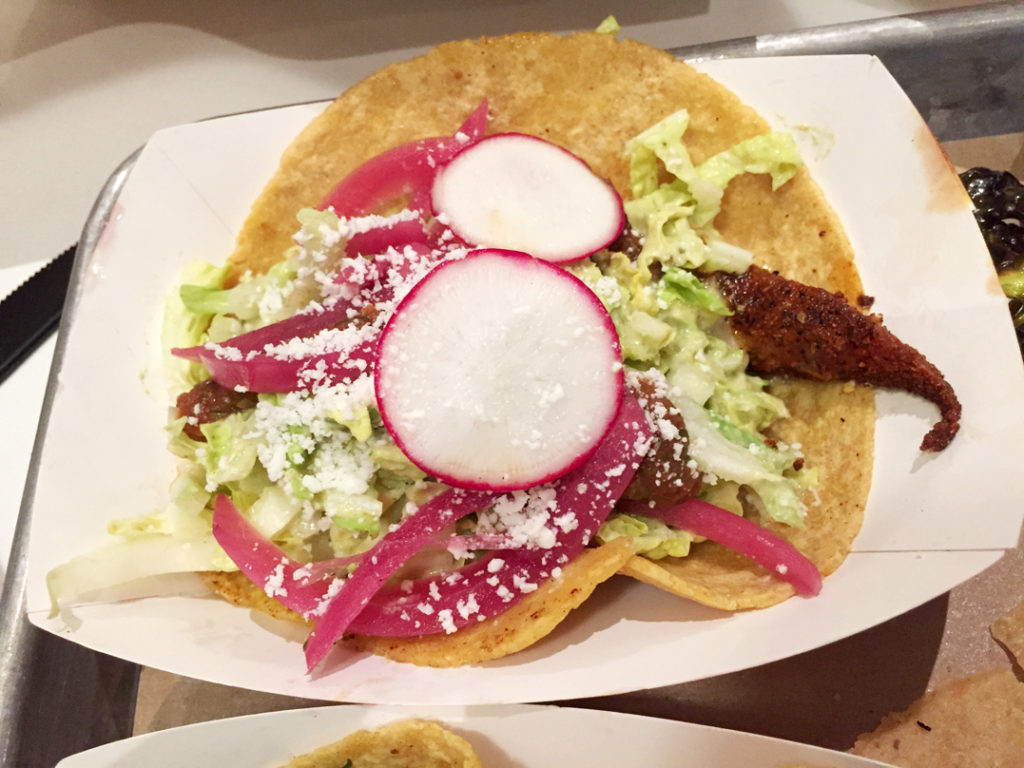 For my side, I got brussels sprouts, and these were just delicious. I loved the crispy charred edges and with a zesty lemony flavor tossed in. The chips and salsa were also a nice side to go with my meal – I could tell the chips were made fresh. 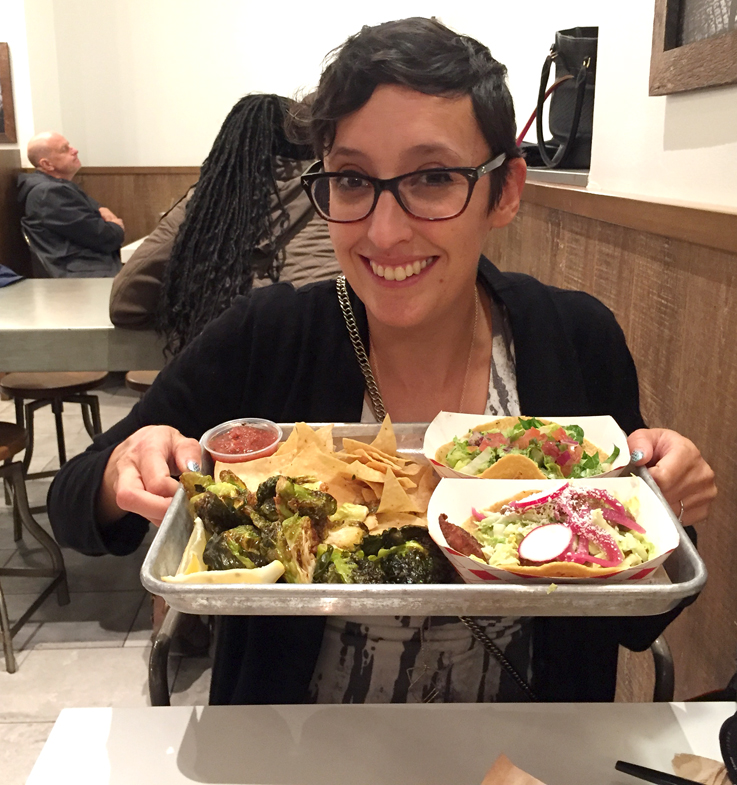 ALEX: I attempted to regain at least some semblance of health after the OMG fries so I ordered the Paleo plate, and decided on my favorite fish mahi-mahi, blackened, to go along with the sweet baked yams and broccolini. The Mahi on this dish was prepared perfectly, and the seasoning had a little kick that added to the fish without overwhelming it. While these sides were both very simple, they were prepared so well, especially the yams, which I didn’t even need to dress up with any extras because they were delicious on their own! 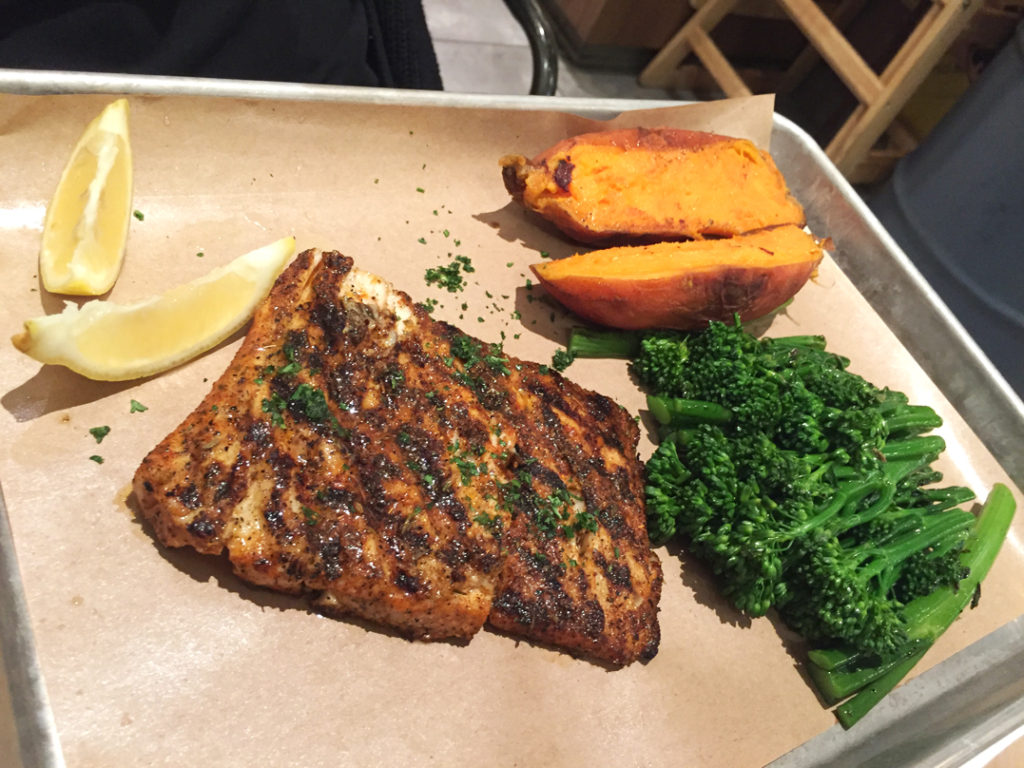 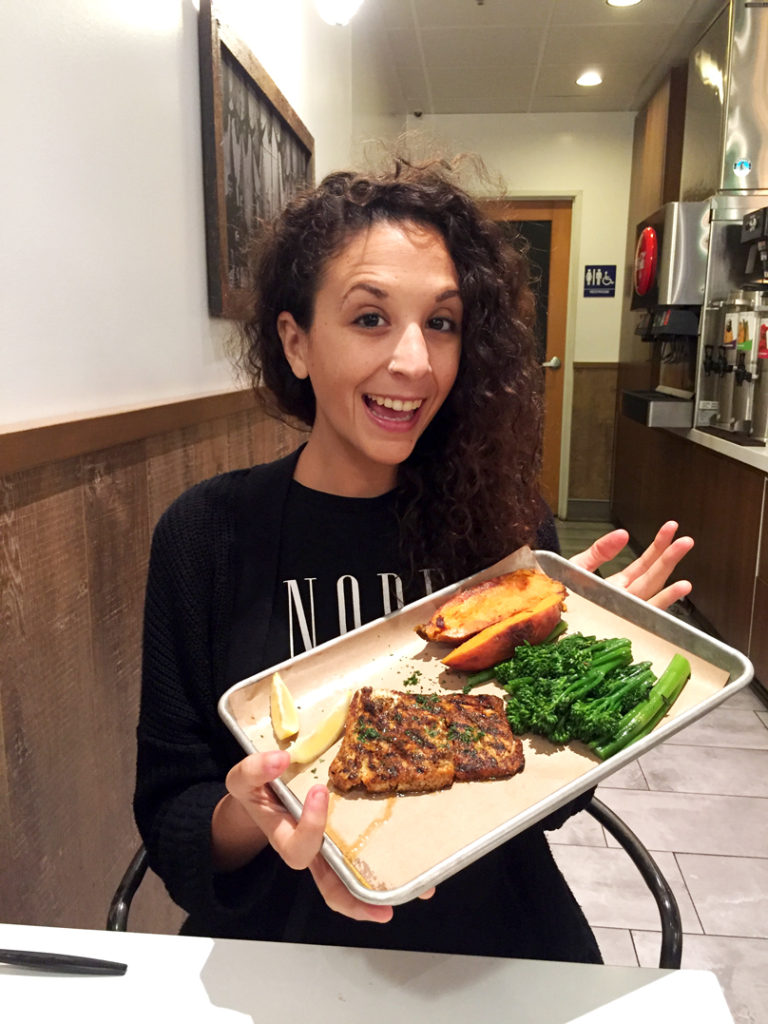 TANIA: To finish off our meals, Alex and I decided to skip dessert and go healthy. We shared a CA Artichoke Salad which comes with half a grilled artichoke, mixed greens, tomatoes, charred corn, avocado, cojita cheese, radish, tortilla strips, cilantro, and tossed with a spicy ranch dressing. I thought the salad had a nice mix of flavors, and I liked the dressing in particular. And it came with a side of tasty, crunchy garlic bread – SCORE! 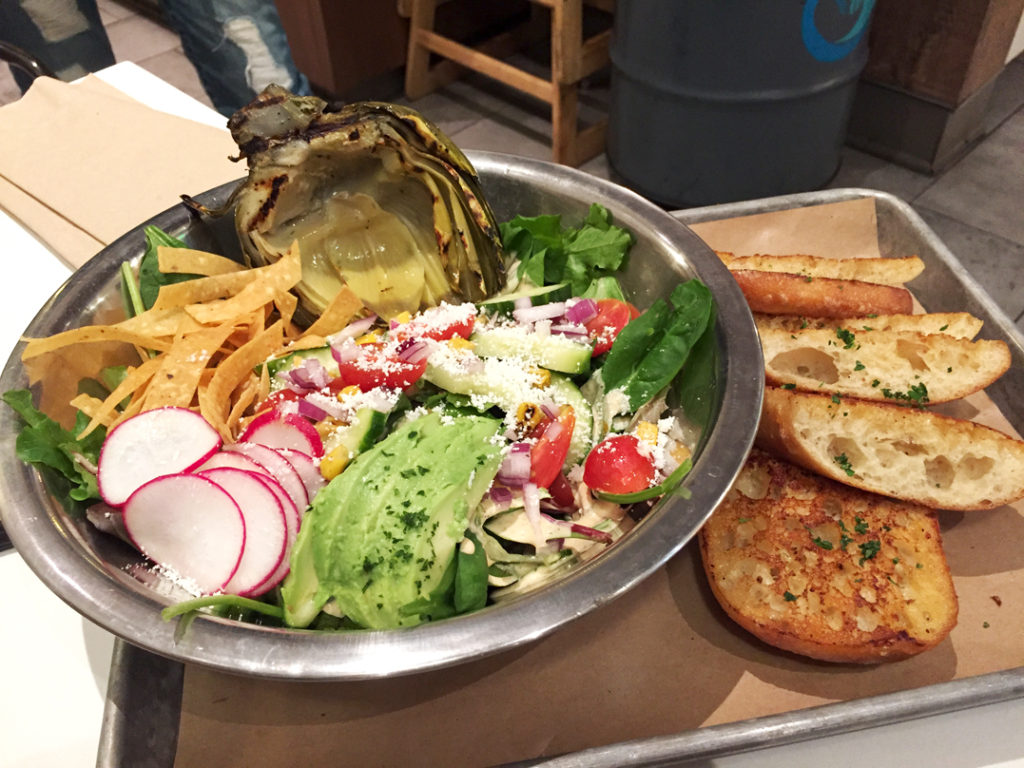 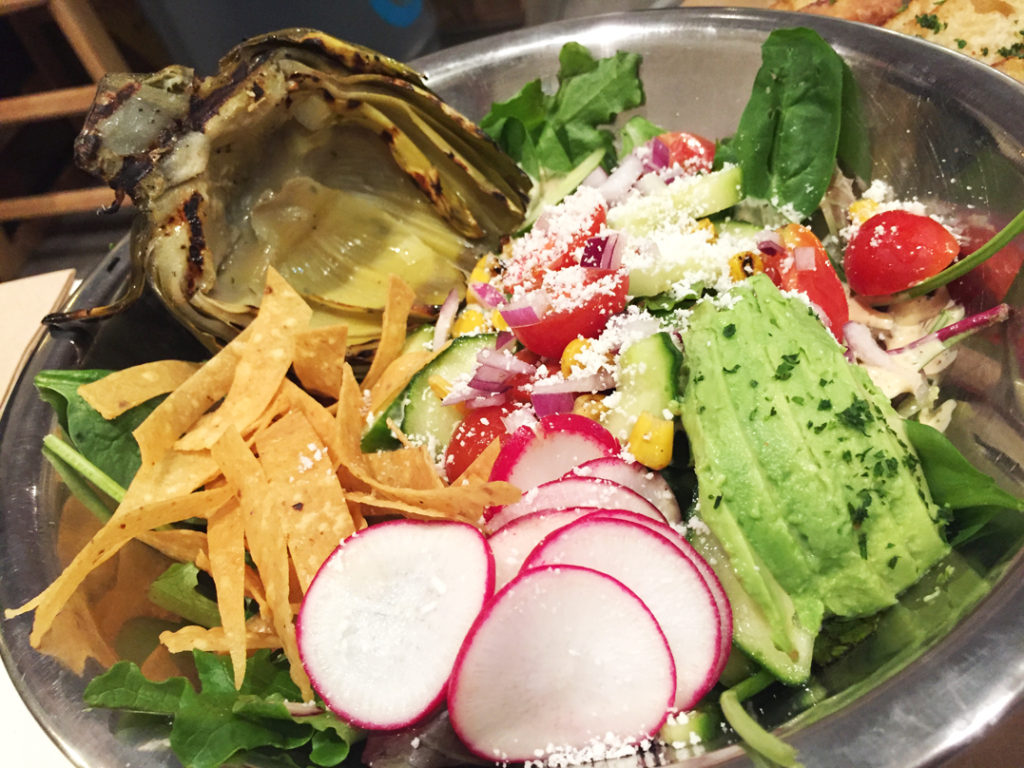 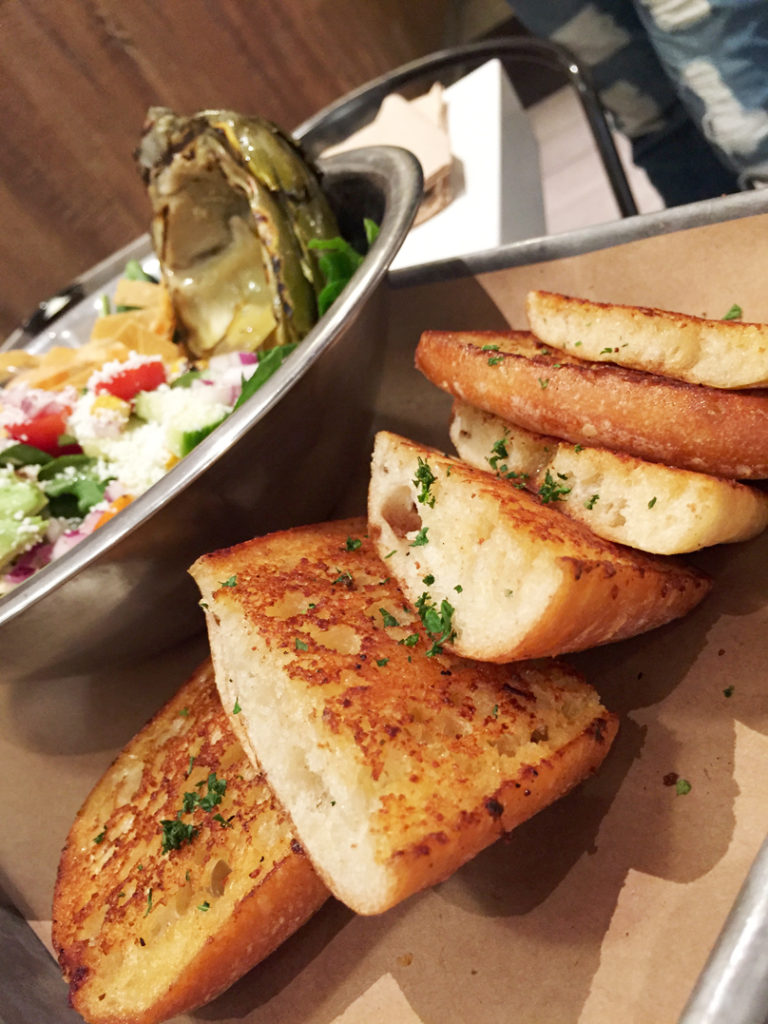 ALEX: It was so nice to see Tania and do what we do best (eat), and everything we tried was so fresh and prepared so well! I will be bringing my family back to this spot whenever I am in the area. Ocean Market Grill has something for everyone, from the healthiest in the bunch, to the one who wants to chow down on a seafood burrito!

TANIA: It’s always nice to share a meal with a friend, but even nicer when that meal is fresh, healthy, and doesn’t weigh you down. Ok… so we might have visited a candy shop across the street after our meal, but still. 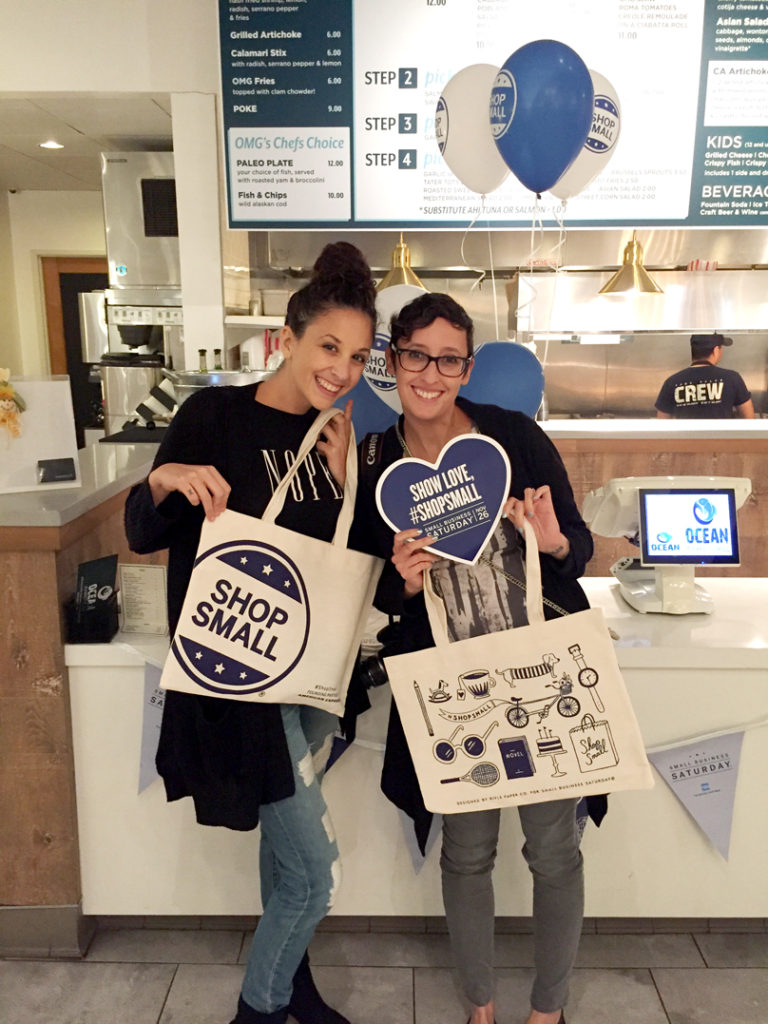 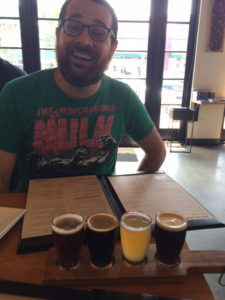 While I may be a San Diegan now, my mom still lives in Long Beach and I have always loved that neighborhood and the awesome eateries that pop up there.  So when I had the opportunity to check out The Social List I jumped at it, and my foodie brother Eric was happy to tag along for some beers and delicious bites! 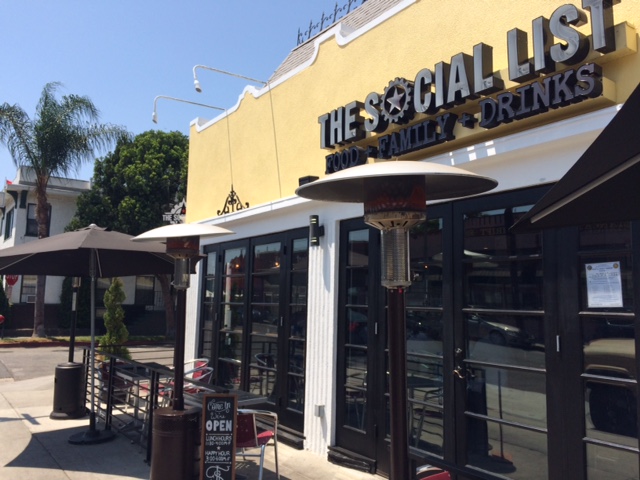 The Social List is an airy and modern spot located on a quiet corner in Downtown Long Beach that has a cute outdoor seating area, the sweetest staff, craft beers in both bottle and tap, and some really stellar food that we are still raving about. The entire experience from start to finish was one of the best restaurant experiences I’ve had, and the staff was so knowledgable and helpful in selecting beers and bites! 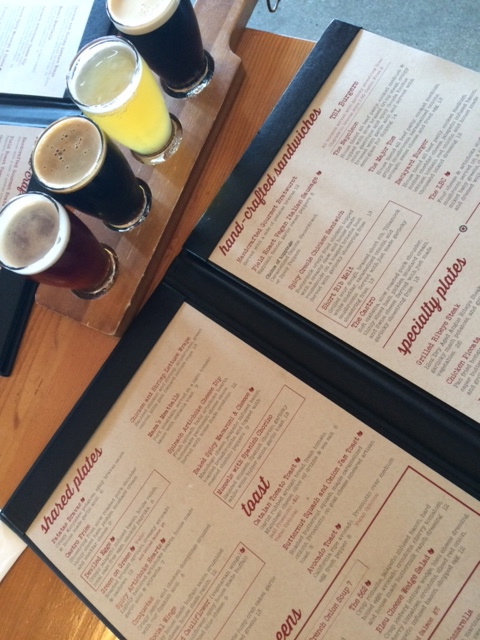 Because we are two of the most indecisive people you’ve ever met, we started out with a flight of beers and went with (from left to right): Avery Raspberry Sour, Stone Farking Wheaton W00t Stout, Nom Nom Mango Hefeweizen, and – one of my personal favorites – Modern Times Black House. 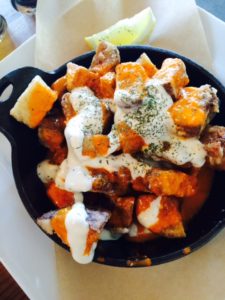 We then moved on to our three delicious appetizers! We tried the Patatas Bravas, which are crispy Kennebec potatoes in a garlic aioli and spicy bravas sauce. Our server suggested that we squeeze the lemon over them for an extra pop of acidity and it definitely put them over the top. The tangy bravas sauce was balanced out by the aioli and the lemon tied it all together while the potatoes still maintained a nice crispy exterior. 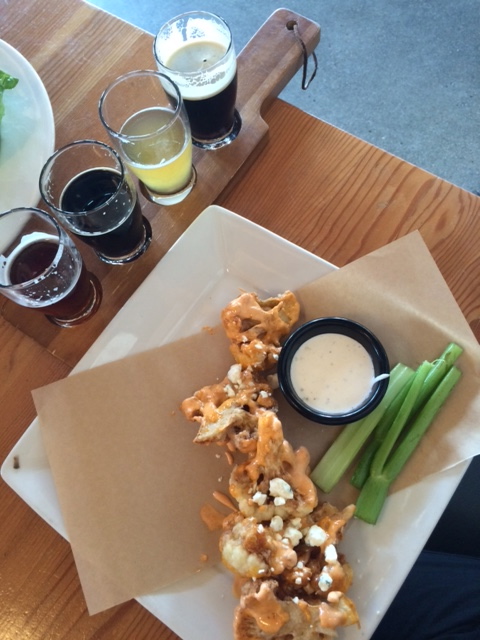 Our next choice was the Roasted Cauliflower, because I am a huge fan of buffalo cauliflower in basically any way shape or form, and this did not disappoint. I really appreciated that they were not totally smothered in the house-made buffalo sauce (even though it was delicious) as they were able to maintain a nice crunch, and the blue cheese added the perfect little kick without being overwhelming. 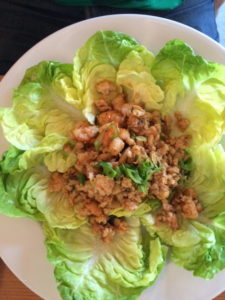 Our last appetizer was the Chicken and Shrimp Lettuce Wraps, which had the perfect balance of chicken and shrimp, and a light and tasty sauce that still let the proteins shine. I loved the combo of the chicken and shrimp as opposed to the typical chicken lettuce wrap, as it added a whole new dimension to a classic dish. 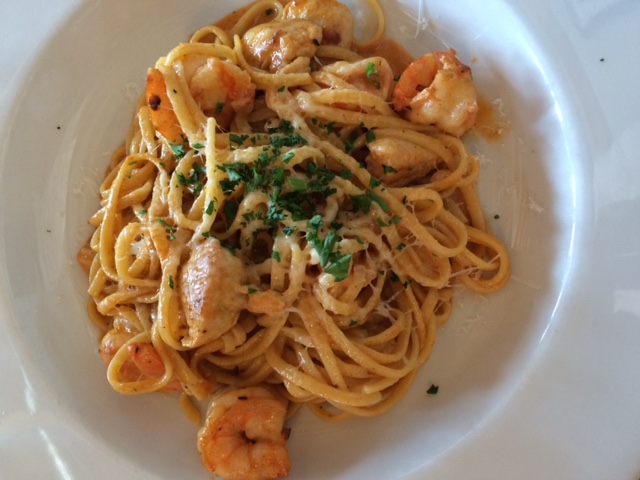 For the entrees our server pointed us in the perfect direction of this Spicy Sriracha Pasta: linguine in a spicy sriracha sauce with both chicken and shrimp. The sauce on this pasta was amazing, and even though I was getting full and starting to slow down, I kept coming back for more, and more, and more. The shrimp and chicken both worked really well here and I once again appreciated that they used both, as it mixed up the textures and kept things feeling fresh and not one note, as pasta can sometimes be. 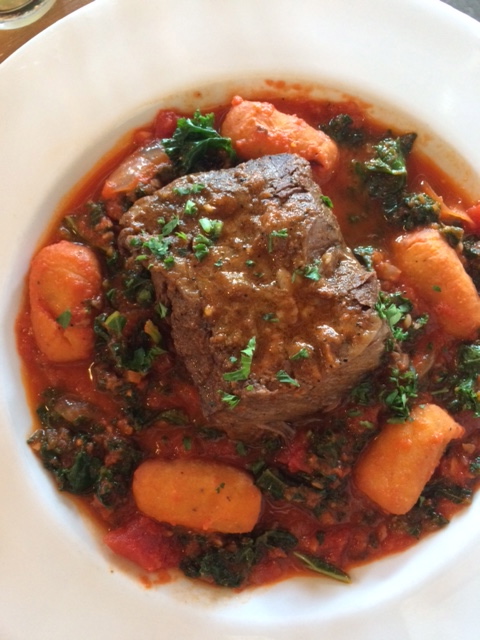 For my brother, who eats red meat unlike me, the server suggested he go with the Braised Short Rib entree, served over sauteed kale, marinara, and house-made gnocchi, and he was so happy he did. Eric said that the short rib was super tender and delicious, with mild flavors that paired really well with the kale and marinara. Even though I couldn’t taste the star of this dish, I definitely stole a gnocchi and it was like a magical little pillow that I immediately wanted more of. 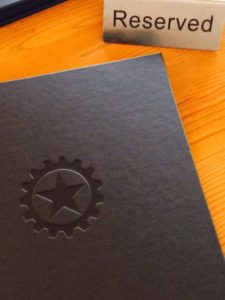 I would highly recommend running over to The Social List if you find yourself anywhere near Long Beach, and I know that I personally will be returning with the rest of my family in tow as soon as I can!