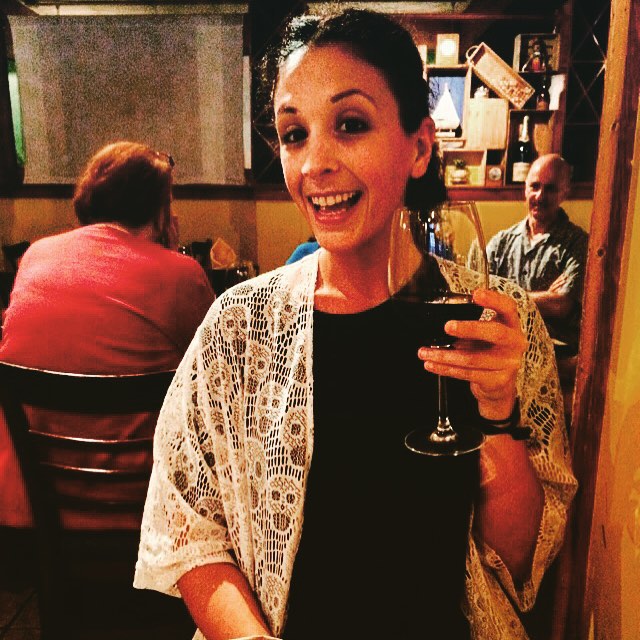 Acqua Al 2: A Taste Of Florence in San Diego

When I was offered the treat of a chef’s choice tasting at Acqua Al 2 in the Gaslamp Quarter of downtown San Diego, I was quick to abandon my “no carbs, sweets, or booze until mom’s wedding” plan, because lets be honest spanx were invented for a reason. 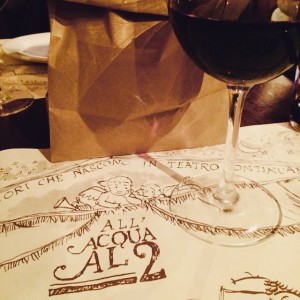 Acqua Al 2 and it’s sister restaurant located in Florence share an identical menu, and according to our waiter, the entire staff is very passionate about keeping things as truly italian as possible. The location has the most charming appeal, with customer decorated plates lining the walls, and a rustic Italian feel that makes you want to book a plane ticket as soon as you can. 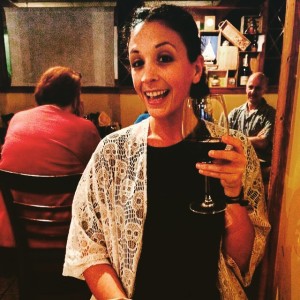 The meal began with a chef’s choice tasting of five signature pasta dishes, each cooked to a perfect al dente and smothered in the most decadent sauces. Pasta and I have a pretty complicated relationship, as I’ve abandoned it for years, but after this experience I vow to never make that mistake again.

1. Farfalle Alla Zucca: a bowtie pasta smothered in a creamy butternut squash, garlic, and rosemary sauce, this was both my friend and my favorite of the night. The sauce had a surprising little kick that came through, thanks to the garlic, and the butternut squash gave the sauce a rich flavor and smooth consistency that had would keep me coming back again and again. 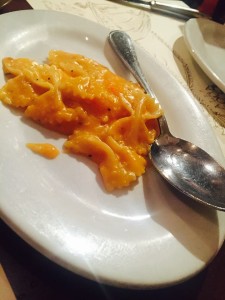 2. Lumaconi Al Broccoli: shell shaped pasta in a creamy broccoli sauce finished with parmesan. I have never been a giant fan of broccoli, I’ll tolerate it if need be, but this dish would have me ordering it willingly. The perfect amount of broccoli flavor and a creamy sauce similar to an alfredo that I am still dreaming about. 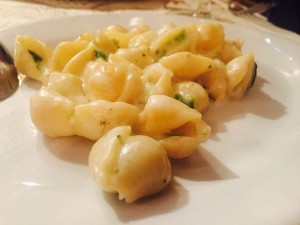 3. Fusilli Corti Agli Spinachi: corkscrew pasta in a light and creamy spinach sauce. All of my distaste for broccoli is made up for my love of spinach, so it came as a surprise to me that this was not my standout. Still cooked perfectly, sauce containing just the right amount of spinach flavor, this is a killer choice if you’re staying on the green side of things, and can almost trick you into feeling like you’re not eating a giant plate of pasta….almost. 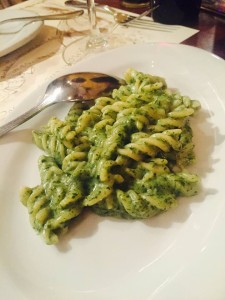 4&5. Two different pastas with red sauce; the first a fusilli with a light and tangy red sauce that had a peppery kick and had a traditional and familiar flavor and the second a rigatoni pasta in a more rustic tomato sauce that had a zesty lemon finish that was so unexpected and served to brighten up the dish in a brilliant way. 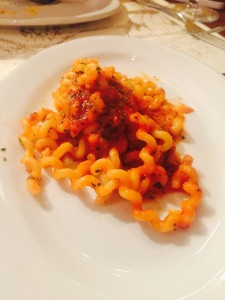 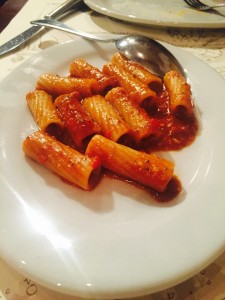 After making our way through some of the most delicious pasta I had ever encountered, we were struggling to figure out where we were going to fit our tasting of entrees. Acqua does an incredible job of catering to restricted diets, and was so willing to change up their tasting menu upon finding out my guest and I don’t eat red meat. Our three entree tasting included: 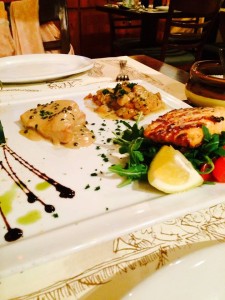 Controfiletto Al Peppe Verde, traditionally served with a hand carved New York steak, our substituted with chicken version of this dish remained our standout. The creamy green peppercorn, brandy and dijon mustard sauce had a unique flavor, and it was such a star I imagine it could shine on any protein.

Petto Di Pollo Al Funghi Porcini, served in a porcini mushroom, white wine and garlic sauce, is reminiscent of chicken marsala. Unfortunately the first chicken choice was such a star that this one felt a little less special, although still delicious.

Petto Di Pollo Alla Grilla, though this is typically a chicken dish,  ours was served with salmon as a substitute protein. Now, I’m a fan of fish, but I adamantly have stood by my distaste for salmon (this makes me quite the unpopular Jew whenever lox enters the conversation) for my entire life, until I tasted this. Served on a bed of arugula with grape tomatoes and lemon, the crisp and salty crust of the fish turned me into a believer. Although it was a touch on the dry side, the combination of flavors had me coming back for more even after I was stuffed beyond belief. 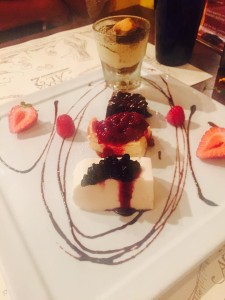 And then there was dessert…. a tasting of their four favorites and the most perfect end to what had been a weird 80 degrees with thunderstorms type of day. The selection included mini tiramisu, panna cotta with a blueberry compote, ricotta cheesecake with a walnut crust and raspberries, and floureless chocolate cake. Though I could probably never choose a favorite dessert, the ricotta cheesecake made me moan out loud, which is always a pretty great sign.

Acqua Al 2 is a stellar choice for a romantic date night, celebratory dinner, or end of week wine and pasta binge, and should not be missed. The entire chef’s choice tasting was rich, decadent and reminiscent of Italy, and had me moving Acqua Al 2 to my list of reasons to venture downtown…..or to Florence ;).