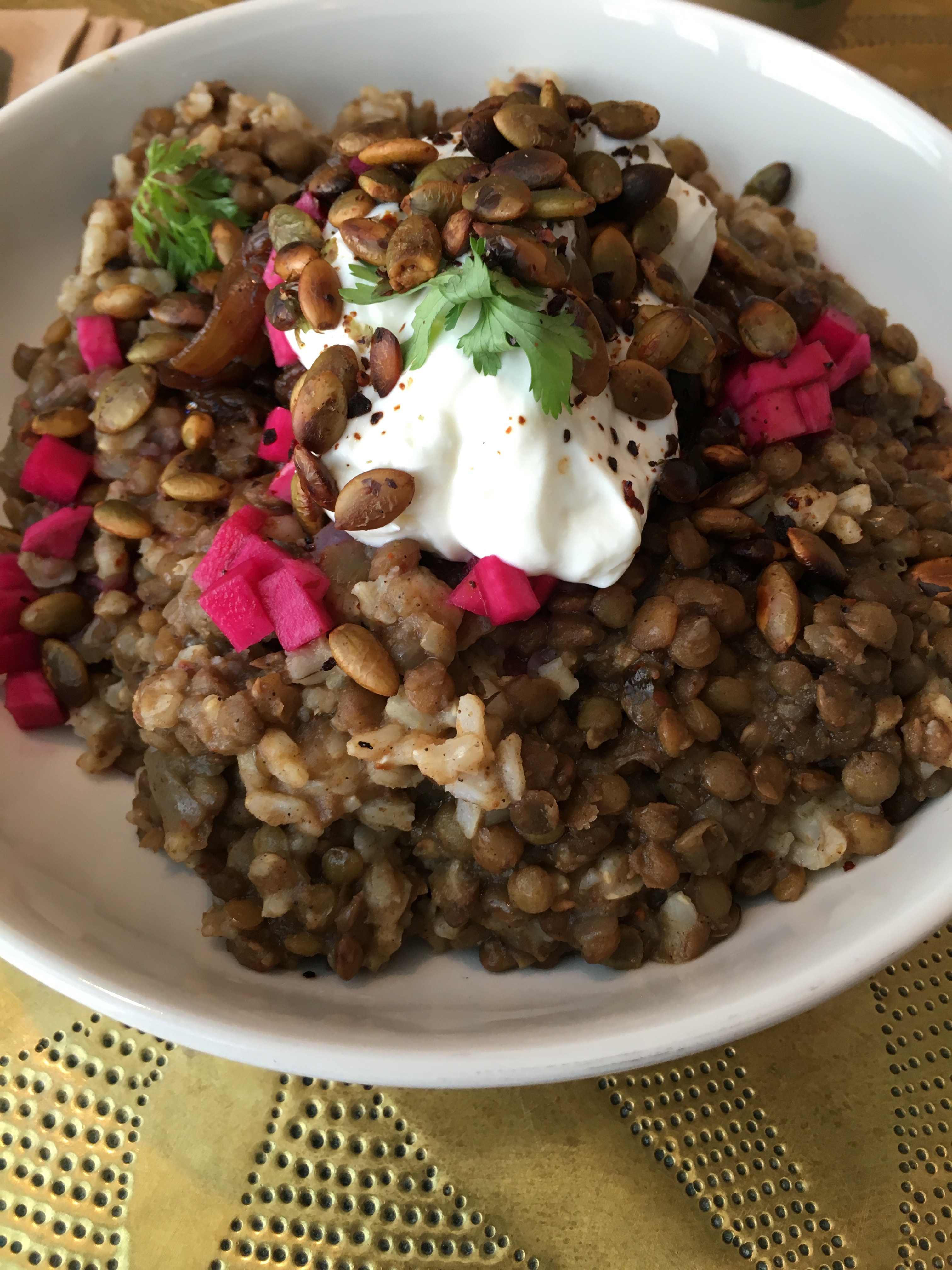 Piece of the Middle East (in Seattle): Anar and Mamnoon Street

A couple of days ago, my friend and co-worker, Quinn and I had a great idea to indulge in our pun obsessions and decided to try a little piece of the Middle East (Get it?  Piece?  Middle East?).  Essentially doing a food crawl and sampling everything at a local Middle Eastern restaurant and its vegetarian sister restaurant next door. 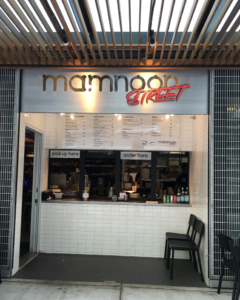 The same people own both Mamnoon Street and Anar, Racha and Wassef Haroun.  They also own another restaurant in the Capitol Hill neighborhood, also called Mamnoon, but there you can sit down and enjoy cocktails with your food.

The Haroun’s came to the Pacific Northwest to work in the tech industry.  They decided to plant roots here and brought a bit of their Syrian/Lebanese heritage with them into the restaurant scene.  They have found their place amongst the foodies and have expanded their availability and visibility by opening up two more locations in the Amazon campus in downtown Seattle.

Our first stop during our food crawl was Mammon Street.  We opted to sit outside in the wind, as opposed to dining inside like a rational people would.  However, sitting outside when it’s NOT raining in Seattle is a treat one can enjoy when the opportunity arises. 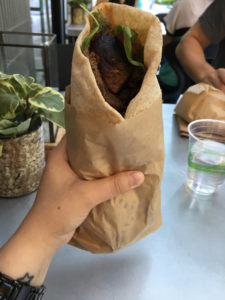 I ordered both the lamb and chicken shawarma.  I had every intention of eating just a little bit of both to give a fair review, but as soon as I started to bite down into the lamb, I couldn’t stop.  I began to feel full right away, and I wasn’t even a 1/4 of the way finished with it.  So I knew that trying the chicken shawarma would have to wait until later, but it eventually went into the eager hands of my Uber driver later that afternoon.

Quinn wasn’t as ambitious as I was (since I suffer from eyes bigger than stomach syndrome), so he ordered a kefta arayess aka sandwich with a side of halloumi cheese. 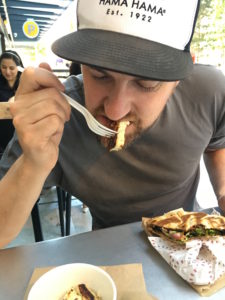 Of course, there was no waiting to take a pic for this guy.  He’s all about business and just started noshing.  I was able to snag a little bite of the kefta arayess and was struck by the perfect balance of seasoning in the ground beef and the saltiness of the halloumi.

Eventually, Quinn gave up and decided he was full while I still wanted to go to Anar. 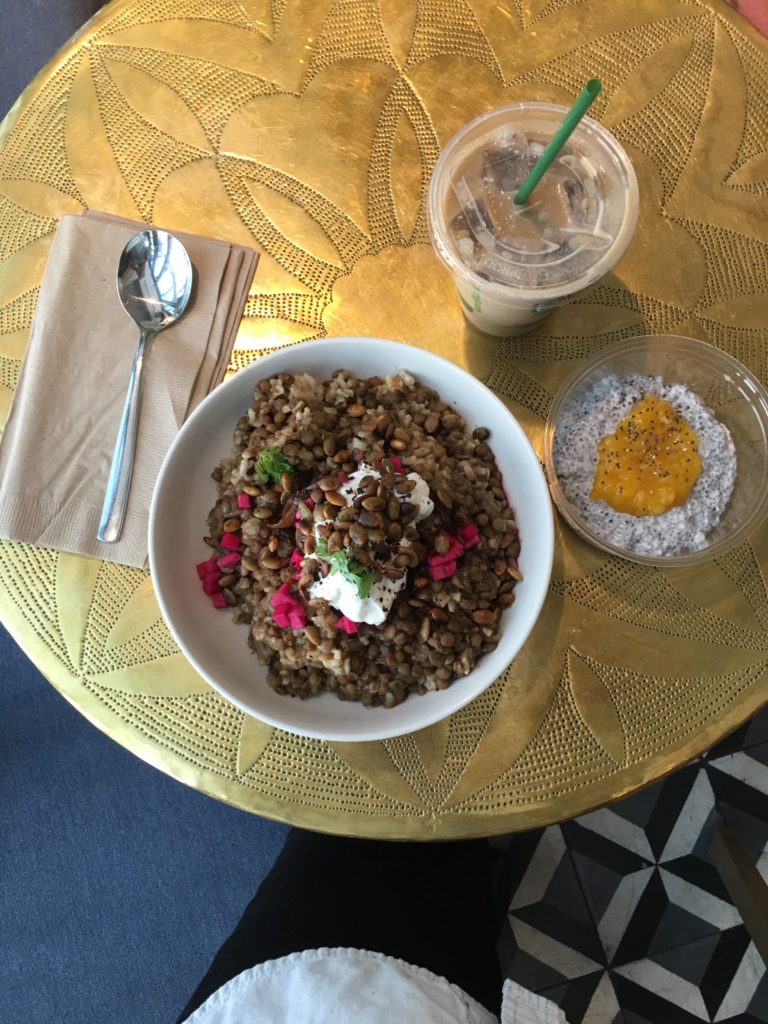 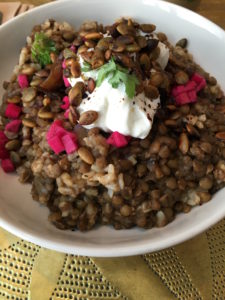 Anar is right around the corner from Mamnoon Street.  The vibe inside looks like a typical juice bar with the display of fresh veggies.  I’ve been there before, and I die for their iced Turkish coffees.  But what I’m really all about is their lentil and brown rice dish called Mujadara.

Topped with pickled turnips and Greek yogurt, this dish is also extra filling.  I knew that I would be eating this for leftovers during the week because it might not look like a lot of food, but it’s a lot of food.  I did manage to take a few bites, but honestly I could have exploded at that point. 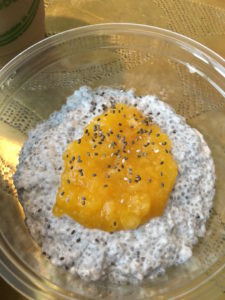 Also, I couldn’t leave without getting the chia seed pudding topped with apricot jam for the road.  Again, this is something to be enjoyed when you have room in your stomach.

The price points for both Mamnoon Street and Anar are relatively reasonable, and you get a huge bang for your buck.  I don’t recommend driving to their location because parking is awful in this part of downtown Seattle. If you are in the area and are looking for a better option than Thai food or a sub sandwich, either one of these fantastic places will be a welcome change for your taste buds!

Getting Chocolate Wasted at the Dallas Chocolate Festival

My story with food has been complex and varied. I grew up in a mix raced household, with a mom who mastered every type of cuisine that she learned how to cook. She aced cooking pasta, Chinese stir-fry, quiche, southern fried chicken, and even Korean kimchi. With her mix of Filipino and Taiwanese recipes, and my fathers North Carolina roots, anytime we ate, it would always be an event. I was never encouraged to cook when I was growing up. I was shooed out of the kitchen, or asked to order pizza instead whenever I offered to cook. I don’t know if it had anything to do with the fact that I accidentally mistook baking soda for sugar when I baked a cake that wound up tasting like toothpaste, or if I was asked not to cook again after I made spaghetti every night for a week. But I do enjoy trying new recipes, whether I make them or not. I really like to dine out and try new foods. I’m still trying to find the perfect BLT at a local hidden pub. I also have my favorite go-to restaurants where I order the same thing every time I’m there because I just know what I’m getting is going to be satisfying. I enjoy traveling, but I also like to stay home and have dinner be delivered to me. Living in Seattle, there are a lot of options when it comes to eating out. I don’t have a lot of time to cook a full meal at home, so going out to eat has become nearly a daily thing. Fortunately, this city I call home has become my extended “kitchen”. On my food blog, I’ll share with you my current cravings, ravings and rants.