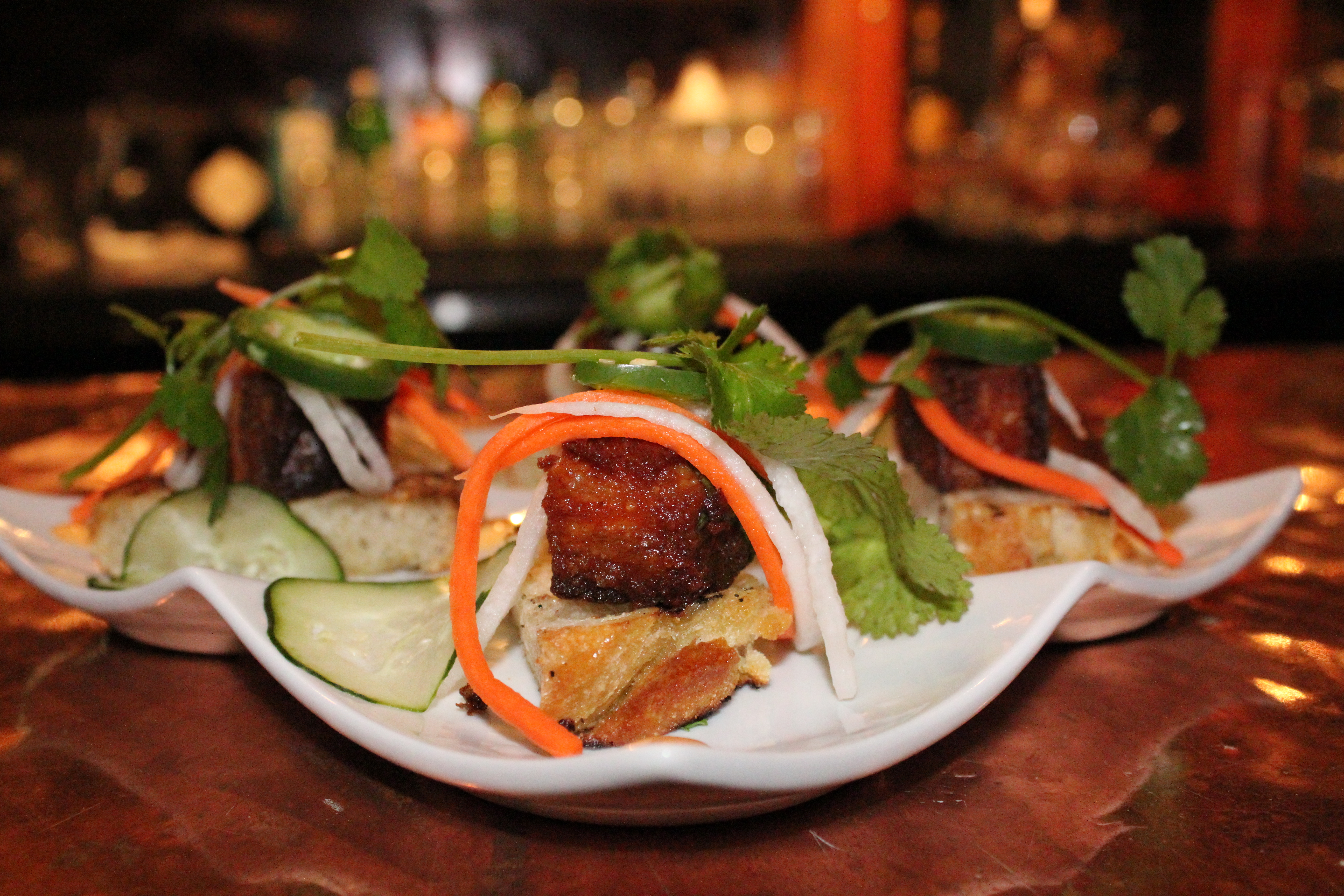 For believers of the supernatural, Los Angeles is a goldmine for ghost hunters, especially for the spirits of Old Hollywood movie stars. The only rumored haunted spot I’ve been to in LA is The Magic Castle and I saw no ghosts. So when I got an invite from Chef Adam Horton to taste the new bar menu at Saddle Peak Lodge (rumored to be haunted by a few spirits according to Haunted Places), I wondered would I finally see a ghost?

In the hills of Malibu, under the Saddle Peak, rests one of LA’s most historic and reclusive eateries. This spot was formed over 100 years ago. Starting as Crater Camp Roadhouse, it has held many identities over the years including a general store, a Pony Express stop, a hunting lodge, a bordello and possibly more. From the early 60’s to today, it’s been called Saddle Peak Lodge and currently, Chef Adam is their Executive Chef.

Adam was previously the Chef at Saddle Peak from 2008-2012 but moved on to cook for Mélisse, Restaurant Gordon Ramsey and other spots. Now, he’s back in the saddle and is very familiar with the landscape there. Regulars of Saddle Peak Lodge, don’t worry, Chef Adam isn’t taking away the beloved menu that is already in place. He’s aware that their longtime customers don’t want a new menu, which I completely agree with, but there will soon be some new allergy/diet friendlier items added.

What makes Saddle Peak Lodge so fun for regulars is that they have maintained a rustic appearance that you would expect from an old-school lodge, but the dining room itself has an elegance to it. Since I was invited to try the bar menu, I was planted at the bar which gave me serious Twin Peaks vibes (remember The Great Northern Hotel?) with their copper bar top, tronco tables and low lighting. Even if you’re someone who doesn’t love sitting at a bar, it’s tough to not appreciate the kitsch feel of Saddle Peak Lodge. 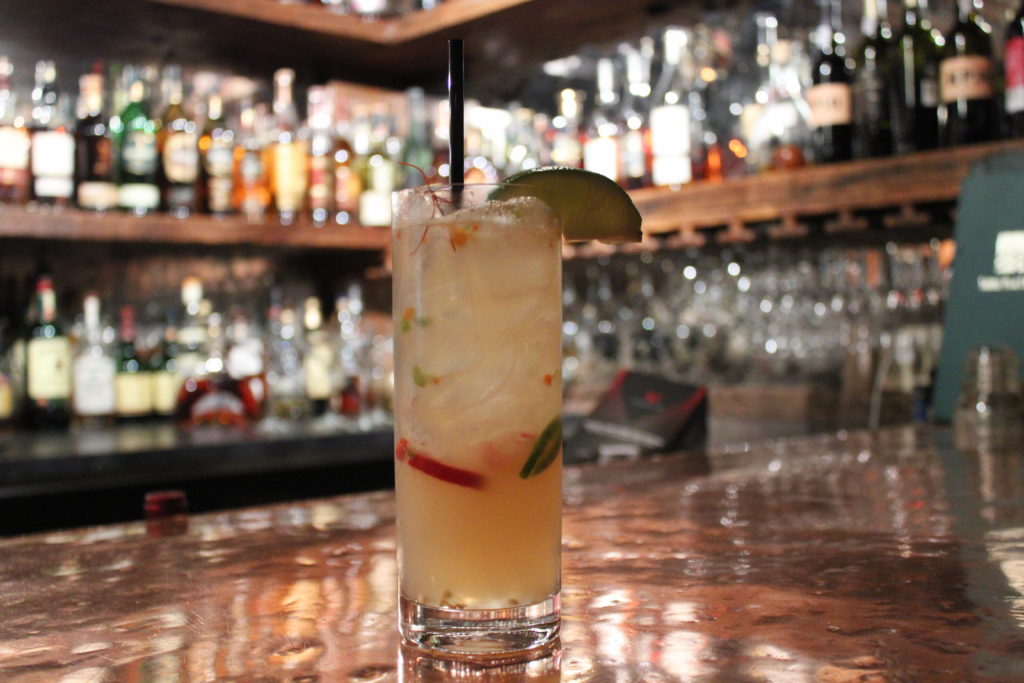 One Night in Chiang Mai

The new bar menu is served nightly for bar patrons from 5 PM – 10 PM. Chef Adam shared with me that he is influenced by flavors of Southeast Asia so, in addition to American classics that will always be on the menu, he’s incorporating a lot of Thai and Vietnamese inspired dishes as well.

I started with the One Night in Chiang Mai cocktail- Tequila, Grapefruit, Kaffir Lime, Lemongrass, Ginger Beer and Chili. This Thailand-inspired cocktail was created by Chef Adam and it packs a punch. The spiciness level is mild-medium and I recommend this cocktail for lime-lovers. 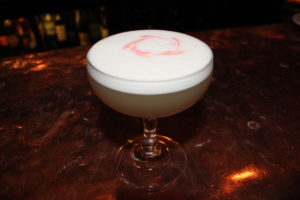 The Saddle Peak Sour is more of a classic cocktail, they infuse Jack Daniel’s No. 7 with vanilla and ginger in-house, then shake with lemon juice, simple syrup, Peychaud’s Bitters and egg white. The creaminess of the egg white with the vanilla flavor made this beverage stand out from other sours I’ve had in the past. Well done. 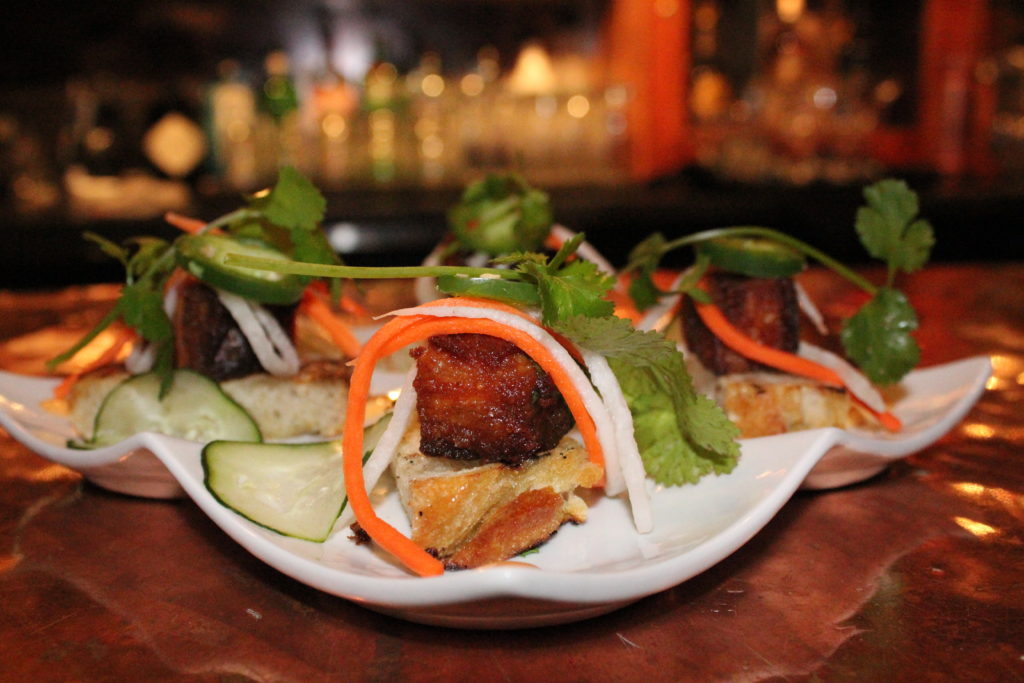 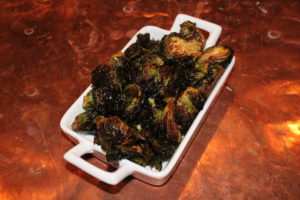 To get a feel for Chef Adam’s style, I decided to start with both classic American and Southeast Asian dishes.

The Pork Belly with Vietnam Flavors is perfect finger food. I recommend pairing this one with the One Night in Chiang Mai cocktail, since they are both light with spicy kicks. I ordered the Brussels Sprouts, which were roasted to crisp with a light balsamic glaze. 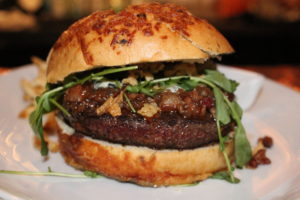 The Saddle Peak Lodge dining room menu is known for having a wide selection of wild game meats while the bar menu focuses on having a more “hands on” approach to food. The SPL Burger is a double patty burger with blue cheese, umami bacon relish, blue cheese, watercress and comes with your choice of salad or fries. I went with fries, of course (you don’t win friends with salad). 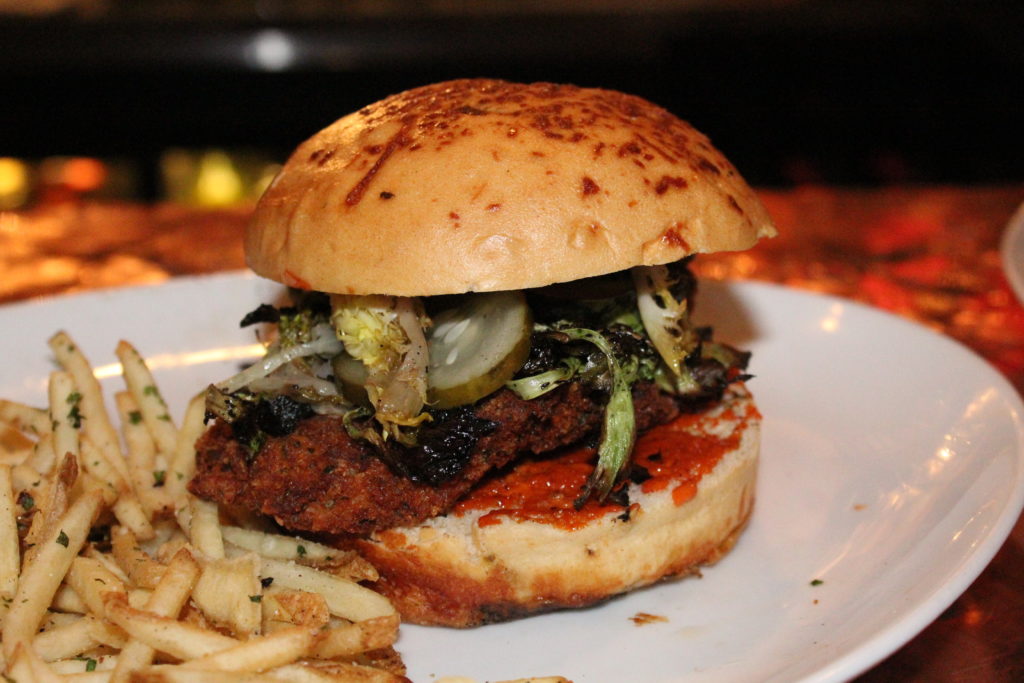 The Crispy Chicken Sandwich was my favorite item from this tasting. The fried chicken patty is pounded to a thin perfection, with a lemon spritz, it reminded me of chicken schnitzel. But what I loved the most were the fresh, dill pickle chips in combination with the grilled frisée. I can’t name another sandwich in LA with grilled frisée in the first place so this was a first for me. The anticucho mayo also adds a savory meatiness and all the flavors work beautifully together. 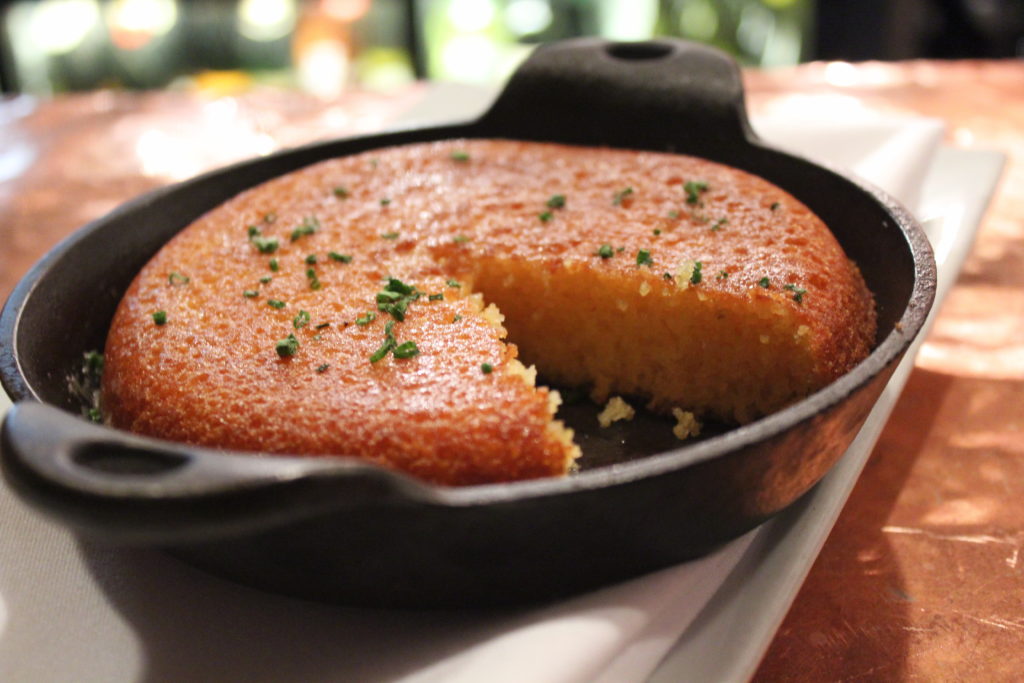 For dessert, I decided to try a pioneer dish and went with the Skillet Hoe Cake. For those not familiar, the Skillet Hoe Cake was a staple dish of the early Americans (sometimes referred to as a johnnycake by Northerners). It’s traditionally a cornmeal flatbread but Chef Adam sweetens it up a bit to make it feel more like a treat. This was my first time having this dish, it’s like a bite out of American history.

Even though I didn’t see any of the rumored ghosts here, the new bar menu at Saddle Peak Lodge will not only leave you satisfied, but you’ll get a sense of mountain dining with some modern influence. I will be back soon to try the wild game items in the dining room, so keep an eye out for future posts!

Gina Homolka at Macy’s in NYC