When it comes to the LA food scene, pop-ups are how many of the most innovative chefs have brought their unique cuisine to the public. Many of the most successful new restaurants can trace their origins to this style of experimental restaurant development.

LASA is the most recent Los Angeles pop-up success story. 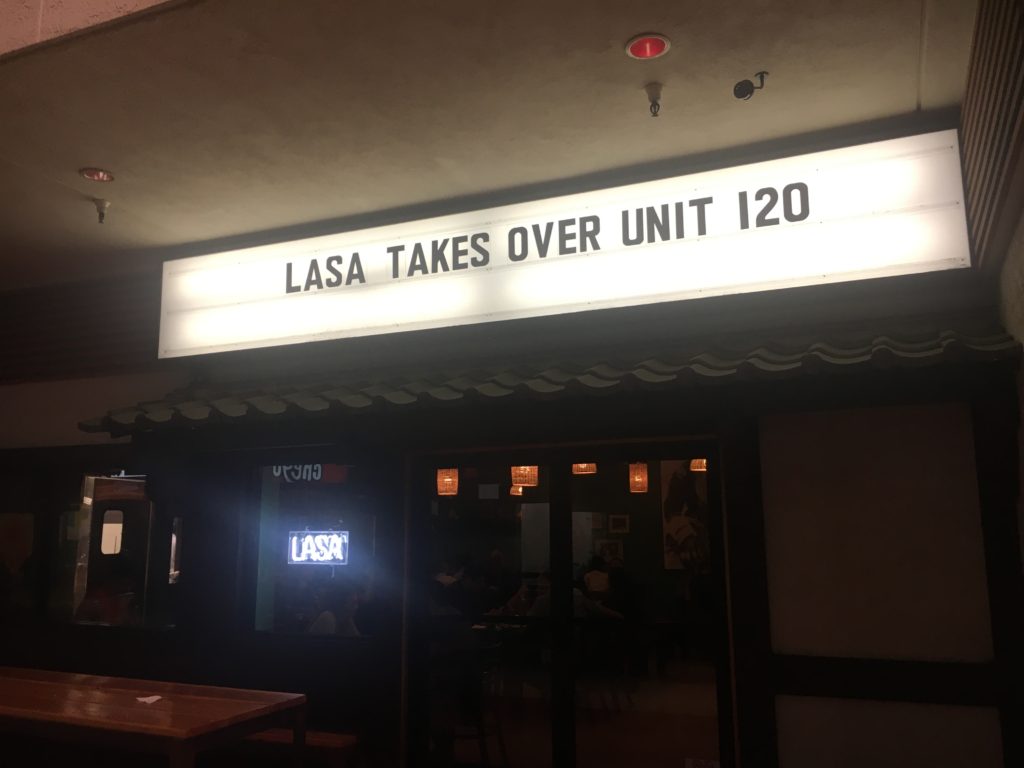 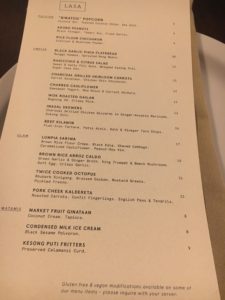 Born in the backyard of one of the co-owners, and now in its first month of being brick and mortar, LASA is a perfect example of how friends and family can influence art. LASA’s heart is the Filipino food the owners grew up with, while adding their French training and California influences that use tons of seasonal vegetables and fusion techniques.

Walking into the space, there’s a comfortable feeling, as if walking into the dining room of a best friend. That isn’t an accident. The staff are all close friends and family, many of whom have been with LASA since that first dinner around a family-style table. They know the story of each dish and are more than happy to share the concept and development of their pride and joy.

The first courses, or “pulutan”, are meant to get the party started. These quick and addictive small plates introduce diners to the meal ahead.

Our pulutan was the Rice Flour Chicharon. This vegetarian version of fried pig skin was topped with scallion and mushroom powder that packed a flavor punch perfectly offset by the crispy crunch of this faux chicharon. Addictive!  When they decide to sell these in bags, I’ll have at least three in my pantry at all times.

Umpisas, the next courses, looked so good, it was hard to narrow them down. We decided on the Charred Cauliflower, Inasal Skewers, and Beef Kilawin.

The Charred Cauliflower arrived first and, my oh my, it was fantastic! The tender cauliflower rested atop a sawsawan yogurt that had a lovely vinegar kick and the pickled red onion with currants allowed for every bite combination to be a new experience in veggie perfection.  It’s so hard to pull of a really sensational vegetarian dish, but LASA has done it with ease.

The next in line, I have to admit, I was hesitant about. Inasal Skewers, which are grilled chicken gizzards in ginger-annatto marinade, worried me. So many times I’ve ordered chicken gizzards and dealt with tough and chewy meat. However at LASA, the gizzards were tender and delicious. The dipping sauce added another layer of flavor and the gizzards, which I worried I wouldn’t want to finish, were gone in minutes.

What I was looking forward to most was the Beef Kilawin, flat-iron steak tartare served with taro chips. Steak tartare is one of those dishes I order anytime it’s on any menu. This version was in the top three I’ve ever had. The use of that flavorful scallion and mushroom powder gave the already well-seasoned tartare that elusive umami flavor.

Our two Ulam dishes were both hearty and had interesting flavor combinations. The Twice Cooked Octopus was served in a sour broth with braised daikon and mustard greens. The flavors were new to me, but intriguing and the twice cooked octopus was perfect in flavor and texture.

The Brown Rice Arroz Caldo was the epitome of comfort food. The ginger and green garlic broth, the two kinds of mushrooms, soft egg, and crispy garlic made every spoonful a different flavor combination. I had to hold back the urge to lick the bowl clean after scraping every morsel with my spoon.

Look, I had no intention of getting dessert. But after being so blown away by the food I tried, I had to give LASA a chance to satisfy my sweet tooth. I asked our lovely server what she suggested and she told us we should try the Kesong Puti Fritters, which are fried much like donut holes but have a house-made salty cheese beat into the batter. Sold.

When it arrived at our table, it looked simple, but my first bite of that light and fluffy fried ball of salty and slightly sweet dough was amazing. Mixed with the preserved calamansi curd made from the citrus fruit popular in the Philippines, it was a perfect flavor combination. Each bite had hints of salt which was balanced but he citrus sweetness of the sauce. Amazing.

I walked out of LASA enamored of the staff, the food and the overall feeling I got from eating such amazing food. I’m excited to share this spot with my friends and family, because LASA made me feel like I already am.