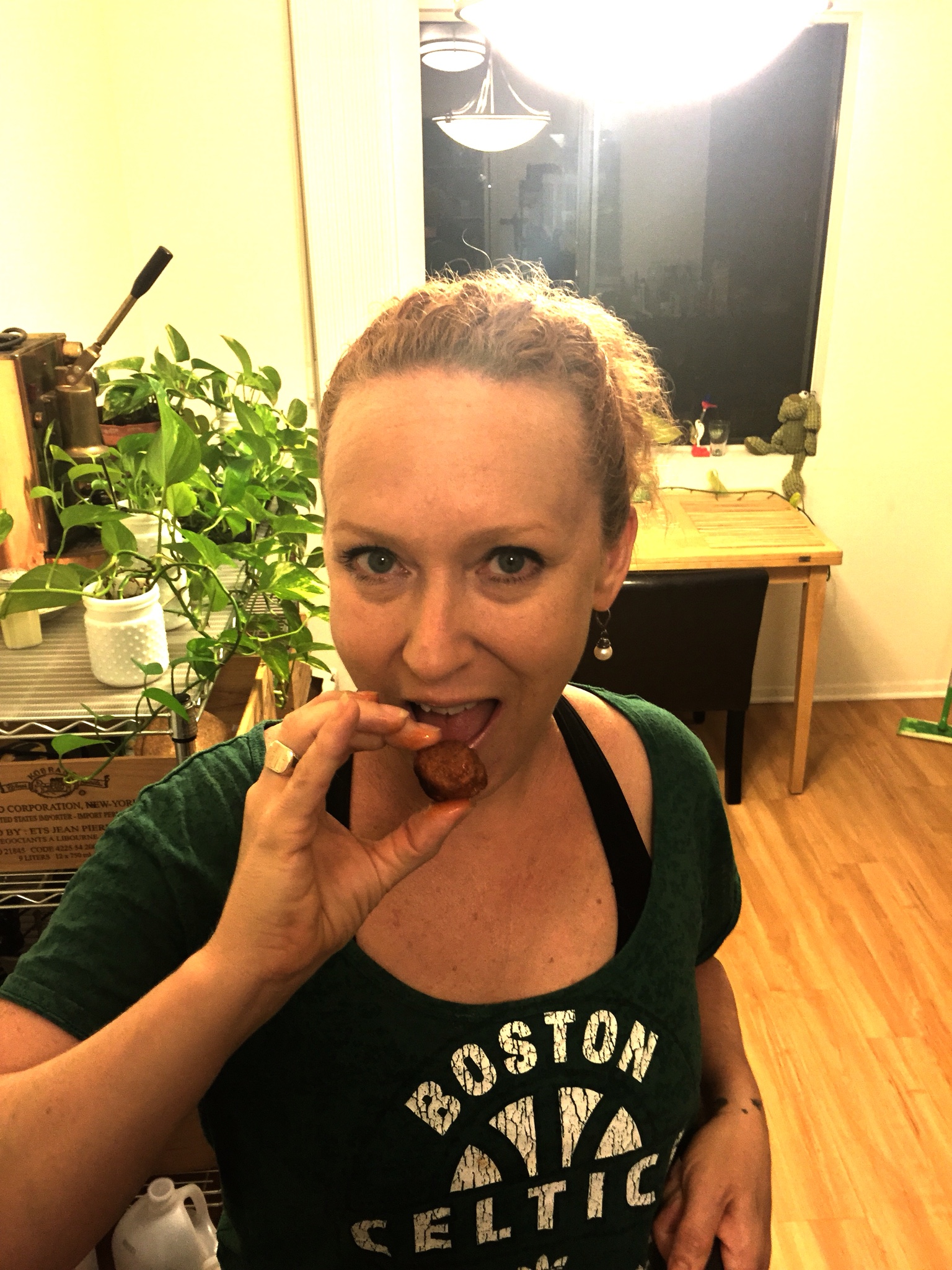 Hanging with The Chori-Man in Culver City

I’d like to say I’m introducing you to one of Culver City’s little-hidden secrets. However, nothing about this man is little. He’s got a big personality, and his chorizo has an even bigger taste! Take it from me; I fancy myself a sausage/chorizo fan (you might say fanatic)!

While apartment hunting a little over a year ago, I discovered one of my new favorite spots, Del Rey Deli Co.! This little gem of a deli deserves its own blog post, so I’ll leave that for another time.

But while there, I was pleasantly surprised to find out they cure their meats and also serve chorizo made by the Chori man himself … Who was cheffin’ it up behind the counter. 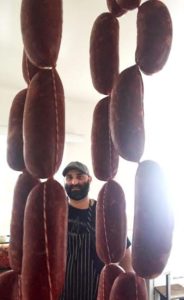 As usually happens with me and food, I formed a quick obsession. I follow him on Instagram @thechoriman … And I love watching his successes! A year later The Chori-Man (Humberto Raygoza) is making it on his own. You can find him every Saturday at “The Wall” farmers market in Downtown LA 9 am to 2 pm. Here he can be found making his chorizo into tacos and burritos. In fact, his green chorizo burritos scored him a place in the top 10 list of the best burritos in L.A. on L.A. Taco.

Find him there and tell him Alia sent you! He also delivers to a handful of local restaurants and you can special order from him with a minimum order of 5 lbs.

The chorizo comes in 5 varieties and can be custom ordered made with chicken or soyrizo. I opted for the Mexican Zacatecano Red because it’s spicy… and so am I. The Chori-Man insisted I also try the Tolucan Green Chorizo, also a Mexican variety. It’s kind of like the Red’s-not-so-hot brother, but as you get to know him you love him for his solid and reliable taste. You can purchase the chorizo in a traditional sausage casing or one pound bags. I chose the Red and Green because I had a few ideas in mind, including egg dishes. Yes, I was already thinking about breakfast before I had even made dinner… 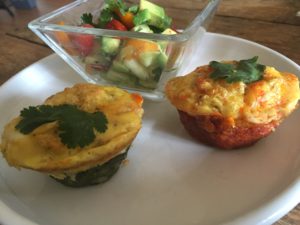 Chorizo day 1: Eggs are another food obsession of mine, and I was anxious to try the green chorizo with my other love. One of my favorite easy to make treats is eggs made in a muffin pan. Usually, I make a turkey bacon basket or a cup out of prosciutto. But you know what I heard, “Chorizo is the new bacon.” These little babes are so easy to make, and the presentation is always excellent. Partnered up with avocado, cucumber, tomato, cilantro, garlic and cayenne salad, I was in heaven. Not wanting to neglect my new love, I made cups out of both the green and red chorizo. 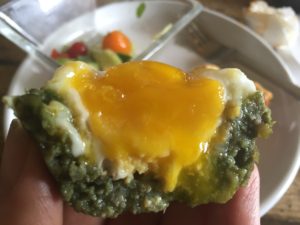 The little souffle cups are made by simply scrambling the eggs and adding a little salt and pepper, and they pop up just perfectly. My little-baked ones are simply that, just a cracked egg in the cup and baked at 350 degrees for 20-30 minutes.

Chorizo day 2: Anyone who knows me knows how much restraint I am practicing writing this post and only making minimal dirty jokes! If you don’t know me yet, I will just say I should come with a warning! 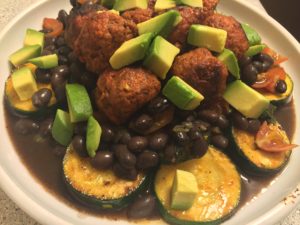 So… I may have had balls on my mind! I’m a huge fan of meatballs and was excited to try out chorizo balls, as I was sure these would be my new favorite. Usually, I would bake them, however, on Chori’s suggestion, I fried them in a little extra virgin olive oil, so I could save the juices and saute some zucchini in it. WHOA!!! While my zucchini was sauteing, I slow cooked black beans with quartered cherry tomatoes, diced scallions, garlic, and cilantro.

Once plated I laid down a bed of the zucchini, a ladle of the black beans, topped with chorizo balls and sprinkled with cubed avocado! This dish was AMAZEBALLS!!! All puns are fully intended…

So, let me tell you this chorizo, is hot! Spicy in all the right ways, but not so much that you can’t taste all the wonderful flavors. It complimented but didn’t overpower! Here’s the other beautiful thing, it was light. Not so dense that you wanted to play billiards with the leftover balls, a common problem I find with regular meatballs. In fact, there were no leftovers at all!

To sum up this experience…
No matter how you shape it The Chori-Man’s chorizo will not only meat your expectations, but exceed them! (I know… I know)

If I ever sit down long enough (besides to eat) to write my autobiography the title will definitely be It's All About the Food!!! My whole life revolves around it... Vacations, work, pastimes, projects dreaming ... Lol "Hi my name is Alia, and I'm a foodaholic!" The greatest part about this story is that I didn't know until somewhat recently that I was actually a good cook! So all these years I've spent chasing down food in one way shape or another just to discover that I have the tools and talent right at the ends of my own fingertips! I liken that to the idea of chasing down the perfect boyfriend/husband just to discover that when I stop and love myself I am enough! In fact I'm way more than enough... I fu**ing Rock! Anyway back to the food. I've spent my life working in restaurants and bars. And now I'm chasing my dream of actually learning how to cook not just for myself but for other people who like to eat like me! I focus on healthy, but satisfying... Always spicy, and usually somewhat easy to prepare. Wait..... Satisfying isn't quite the right word... I want you to sit back and say "damn that was good!" After anything I feed you. #goals You can find me on Facebook under Alia Schrader, Instagram user name is @aliapet and Snapchat is Aliapet73 Ps... I get such a kick out of looking at my working resume right now... Girls On Food, Chicks With Knives, A Taste of Gourmet, and Forever Fido Rescue. Now those are some bad ass names!