Journeyman’s Food + Drink is a restaurant that will be opening up in a few months (alongside Citizen Kitchen) at the Hotel Fullerton in Fullerton, CA. Executive Chef Zach Geerson (of Citizen Kitchen) will be spearheading Journeyman’s and is giving his fans a taste of what’s to come, with his private wine pairing dinners. If you are wondering why it’s going to be called Journeyman’s, Chef Zach explains, “We thought it was embodying how we feel about our craft to say that we are constantly Journeymen.”

The second series was called “Five” because it consisted of five dishes, using five ingredients, cooked five different ways. The main ingredients that were consistent of the dishes were duck, almond, beet, cocoa, and honey. I thought the most unique dish was the Almond Bisque. One wouldn’t think that the ingredients chosen would go well together, but they did. The Beet Salad was very flavorful. I am not a huge fan of beets, but lately, they’ve been growing on me. Next, there was the Cocoa Agnolotti and the texture of that pasta was incredible. The Duck Breast was outstanding- I could have had that as my main entree and be satisfied. Now to my surprise the Honey Red Velvet Cake also contained the five ingredients, and I did not expect to enjoy it as much as I did. You could taste just a hint of the smokey duck.

The third dinner series (what I’ll be focusing on today) was the five-course “Spring Has Sprung” vegetarian dinner paired with California wines. I was very excited to attend this dinner because I’ve never had a five-course dinner also be vegetarian. It’s a refreshing, a healthier route and I’ve had maintaining my weight on the brain, such perfect timing!

The Spring Pea Panna Cotta was gorgeous to look and to taste. It’s a beautiful tribute to Spring. It looked like fancy jello with lemon juice and lemon zest inside, some heavy cream, blanched spring peas, micro thyme, cocoa soil, spring pea puree, and black garlic, fermented in the kitchen for a week and a half. It looks airy but was filling.

The Roasted Heirloom Tomato Soup served with a Grilled Cheese Sandwich was delicious, and it was not your typical version. They griddled some parmesan cheese to make the parmesan tuile with cheddar, Swiss, goat cheese, and parmesan moose. So, cheese on cheese (no complaints from me!). This was a hit for us at the table.

The Mushroom Tortellini was spectacular! It had morel mushrooms, ricotta, asparagus, and charred green onion. The soup base was so mouth watering, I wanted more. 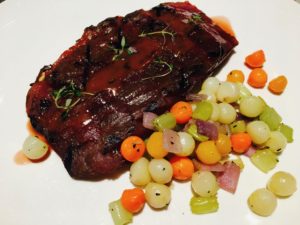 Next up was the Steak Au Poivre, which was very deceiving to the eyes since you know that there is no meat, but visually your mind is perceiving it as meat. The “steak” is grilled and roasted eggplant with beets and vegetables on the side. Last, but not least was the pièce de résistance dessert, the Mole Spiced Devil’s Food Cake. I took one bite and could not stop eating it.

I asked the Chef Zach why he chose to focus on a vegetarian dinner, he told me “The main reason for having a vegetarian dinner and pairing it with wine seemed more of a challenge for my team and me. To make sure that everything was balanced, especially getting into the red wine realm. Still making it delicious so everybody that is eating doesn’t really notice that it is all vegetarian. It’s cool and takes you back to eating your vegetables.”

Chef Zach considers himself a Journeyman for life. “We never stop learning from the Masters or people we consider Masters. I consider Chefs like Joël Robuchon and Thomas Keller to be mine. We can continue to learn from those Masters. As we grow, the restaurant can only grow with us. It can never go backward. Journeyman’s will start great, and it can only get better and better and better as we get better.”

After listening to him speak, I am so excited to watch him grow as a Chef. You can see that in the dishes that he creates, there is a lot of thought, experimenting, long hours, and hard work. I am ecstatic that he decided to host wine pairing dinners once a month. To keep up with tickets for next dinner, click “like” on their Facebook page.