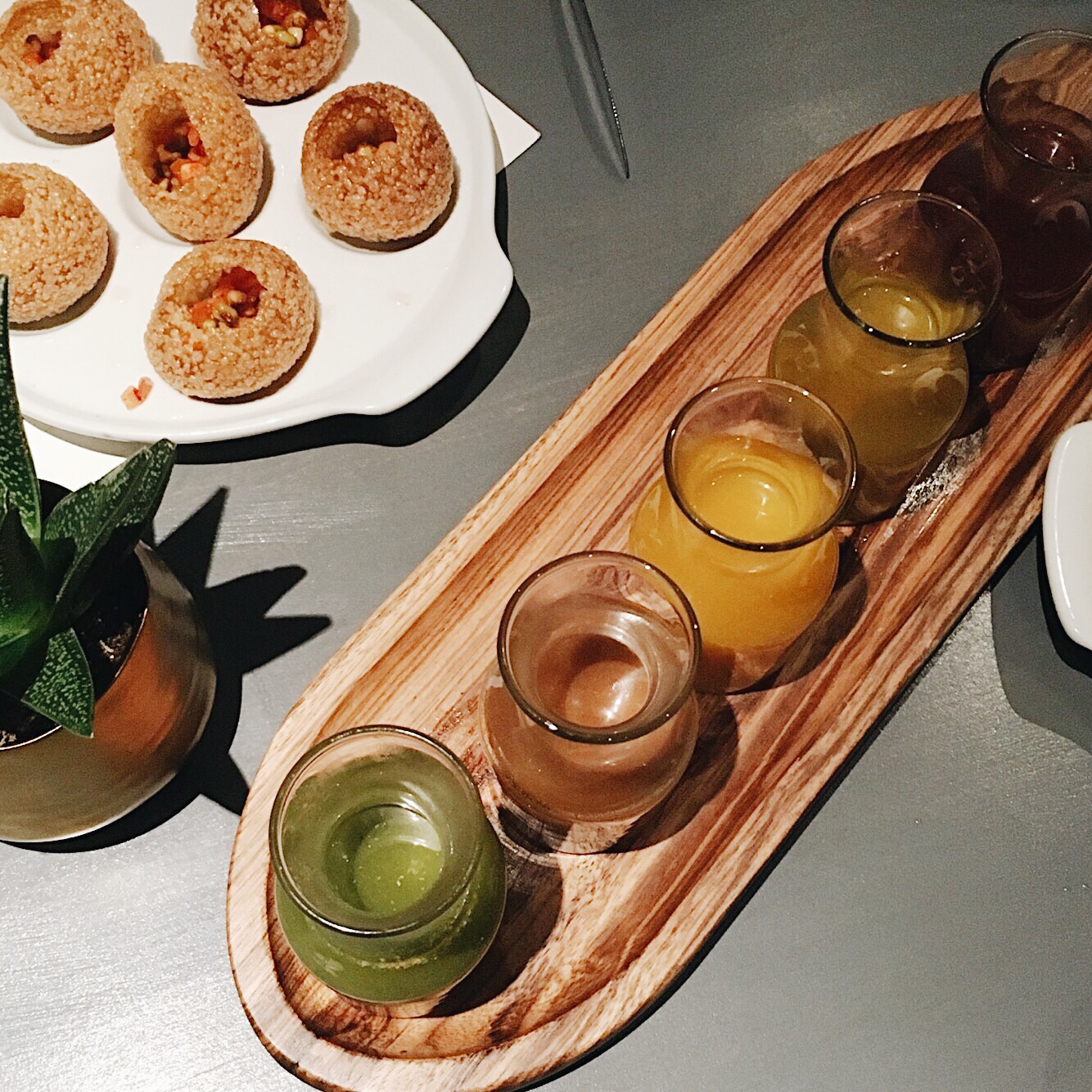 When you hear that Chef Manish Tyagi from Rasika in Washington D.C. is cooking out in the Bay, you gotta get over there to eat fine Indian dining, stat. After visiting D.C. and spending a summer there, I came back missing Rasika’s fantastic food. My whole family is a big fan, so when they came up to the Bay during New Years, we knew we had to make a reservation at August 1 Five. 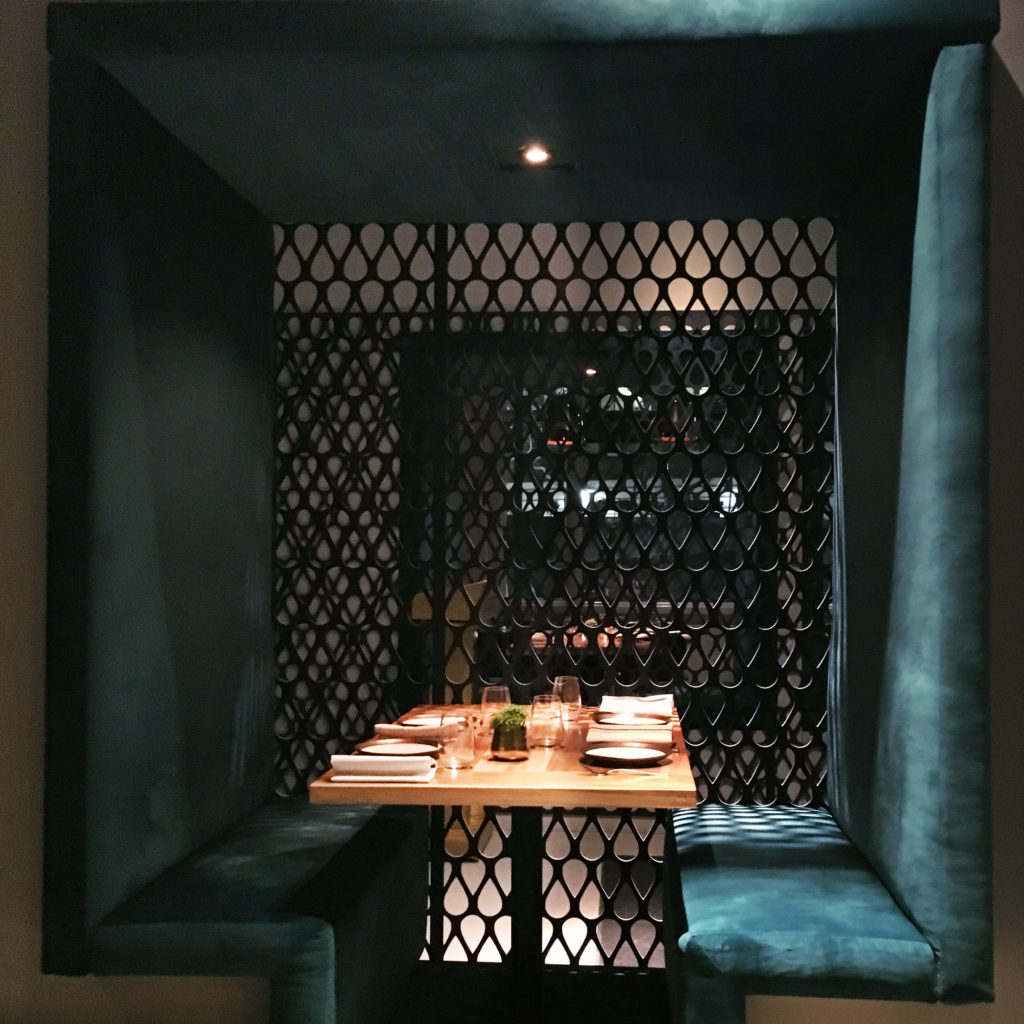 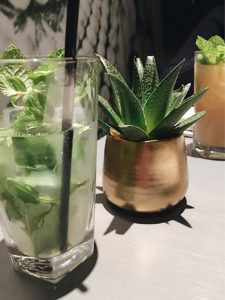 Five comes from the date that India became independent from the British Empire. Just as that ushered a new era for Indians, the food at August 1 Five approaches Indian food in a modern way. It combines street food and home cooking into a fine dining experience. The restaurant is tucked away in a quiet alley in the Civic Center, but it’s a surprisingly large restaurant. The bar is front and center, and a have a variety of creative cocktails with Indian flavors such as the turmeric lassi. I ordered a refreshing mint lemonade that worked well with all the rich flavors I had that evening. 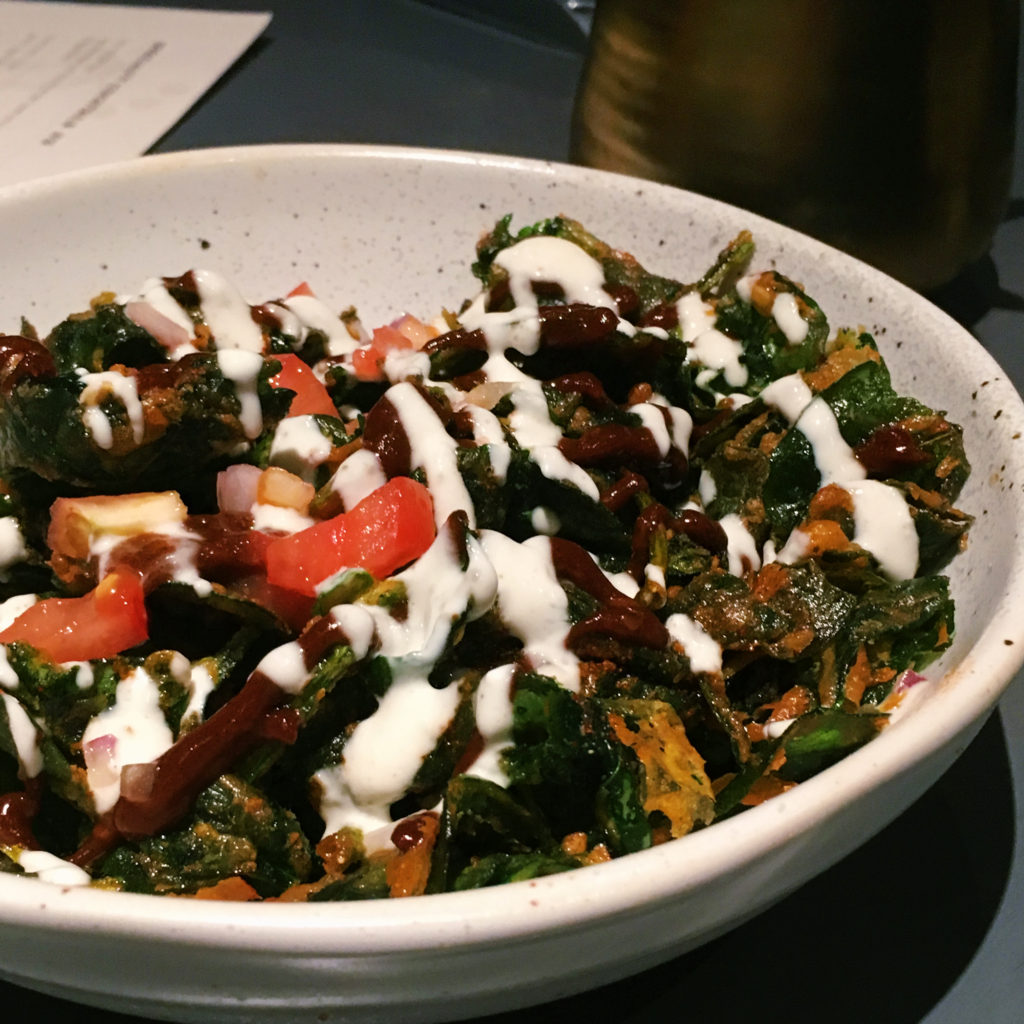 There are small bites, which are essentially small plates. We ordered a bunch of small plates because we were curious to see what the restaurant came up with. The first small plate we ordered was the Palaak Chaat, with baby spinach, garbanzo, rock salt, tamarind, and yogurt. This dish is what made everyone a fan of Rasika, and I’m so glad it’s a part of August 1 Five’s menu. The spinach is fried until crispy and then slathered with the salty and tangy tamarind yogurt. It’s surprisingly addictive and makes you savor each crunchy bite. 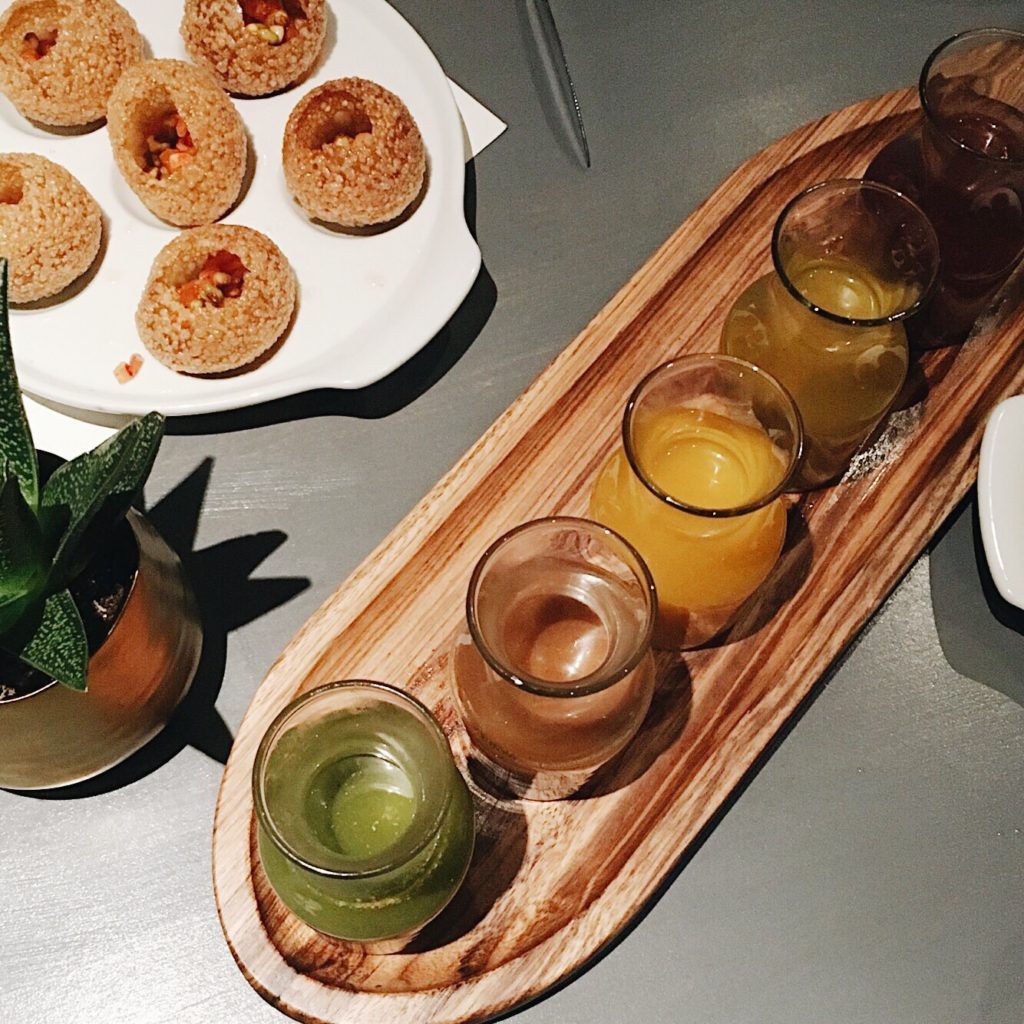 Next up is the Gol Guppa Flight! This dish consisted of wheat shells, chaat masala, potatoes and five different flavored waters: grape, tamarind, mint-cilantro, mango, and fruit punch. I was super excited to try these as I’ve grown up eating Gol Guppas. It’s a little flaky wheat puff, which you then poke a hole in and put in the potatoes and masala. After that, it’s topped up with a flavored water, traditionally slightly spicy one with tamarind. I liked the contrast of the sweet flavors (grape, mango) with the spicier ones (mint-cilantro and tamarind). 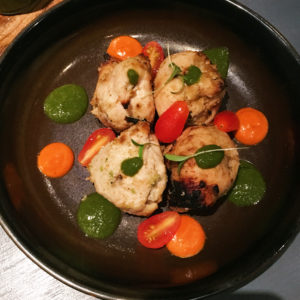 We also ordered the Chicken Kebabs; these consisted of chicken, cardamom, cashew paste, cheese, and cilantro. They were really nice and juicy with the perfect blend of spices. The red sauce decorating this plate was
fantastic. 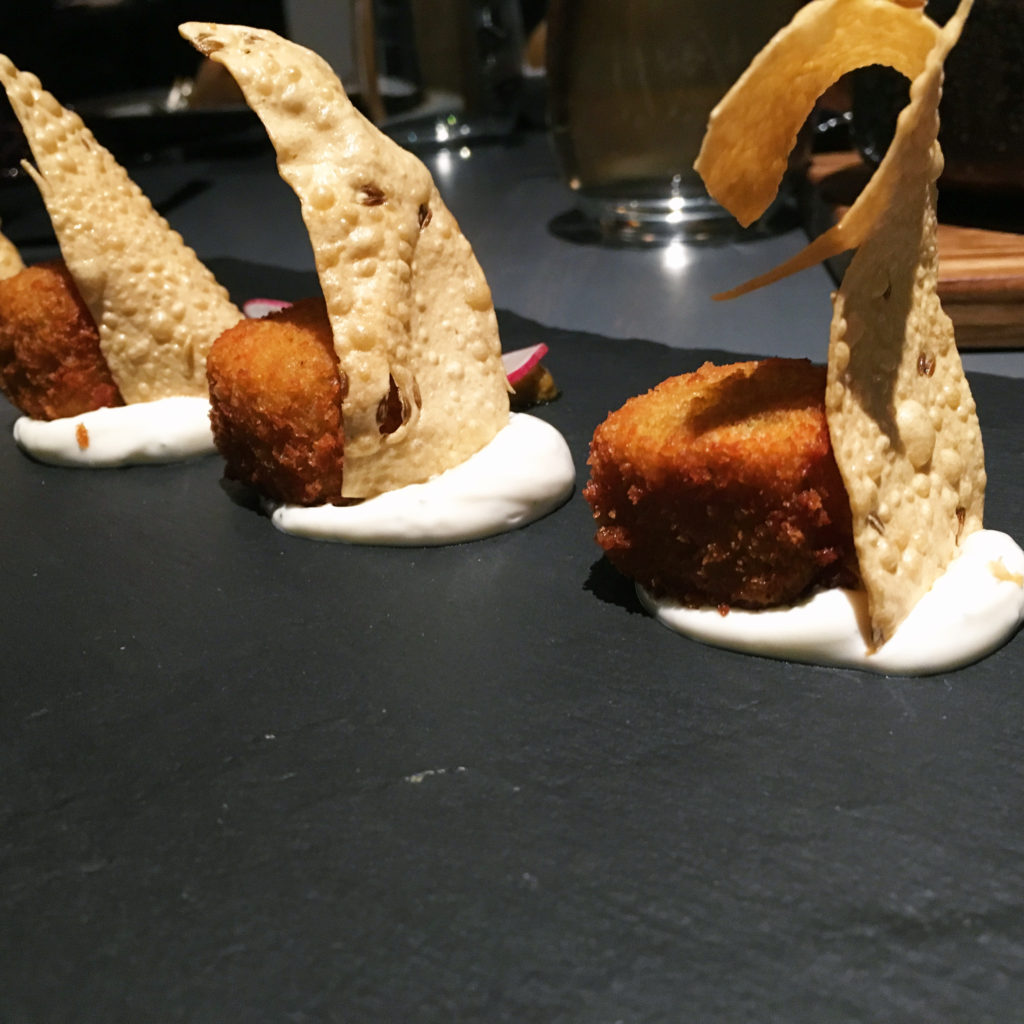 Another small bite option was the Arancini, which had rice, lentils, goat cheese, and seasonal Indian pickle. These felt like a lighter version of traditional Arancini, which are essentially cheesy risotto balls. The cheese sauce at the bottom needed to be on all of the things. 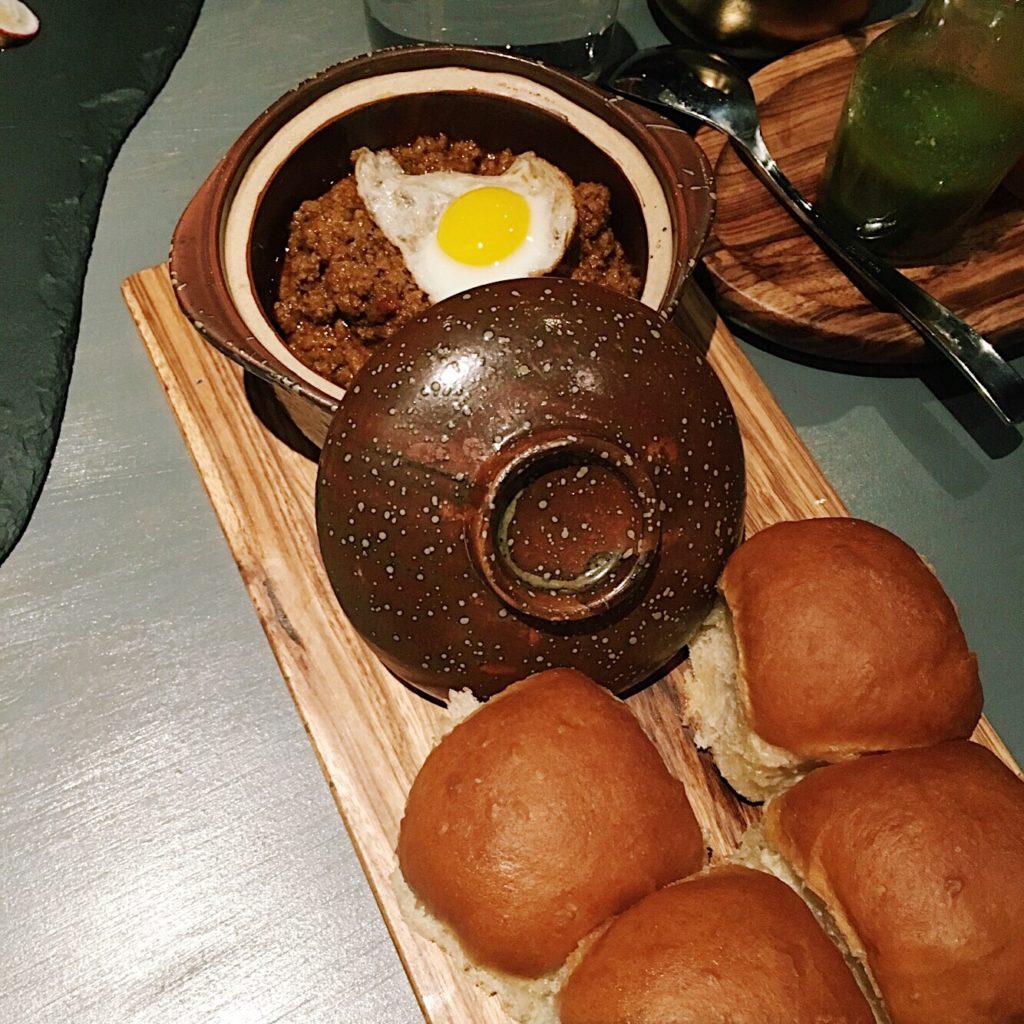 When we saw “Keema” on the menu, we knew we were going to order it. I have never seen Keema (ground meat, usually beef) in a restaurant. Keema is another dish I’ve grown up eating at home – and one of my comfort foods – so this was cool to see on a fine dining menu! 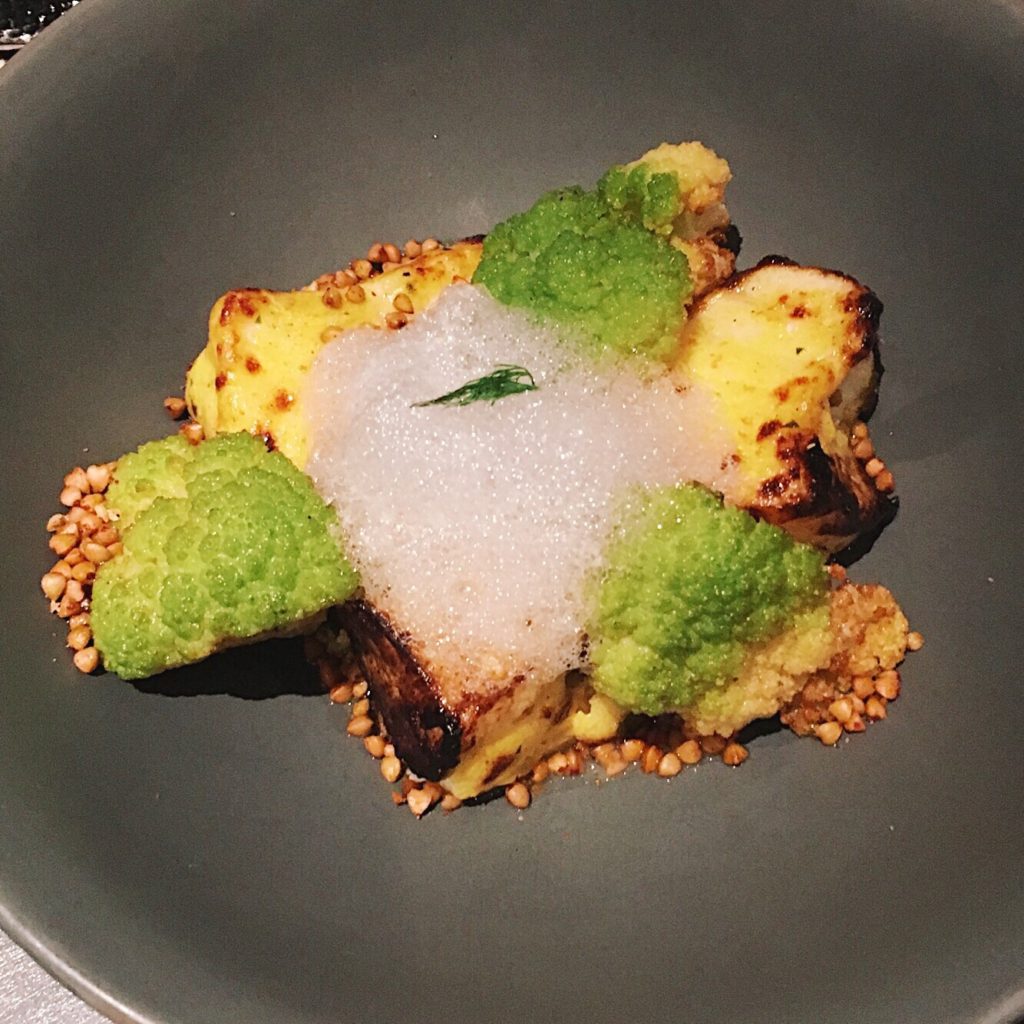 The entrées, or Patiala Plates, are just as good, if not better, than the small plates. It’s stiff competition, tbh. Hands down, my favorite entrée was the Tandoori Sea Bass, with lemon zest, yogurt, dill, and buckwheat. The yogurt was foamed up with the tangy flavors of lemon and dill. This fish was SO GOOD. It was so buttery it melted in your mouth, and the tangy foam and herbs really brought out the flavors of the fish. I’m pretty sure I ate half of this by myself, and this was meant to be shared between five people. Sorry, not sorry. 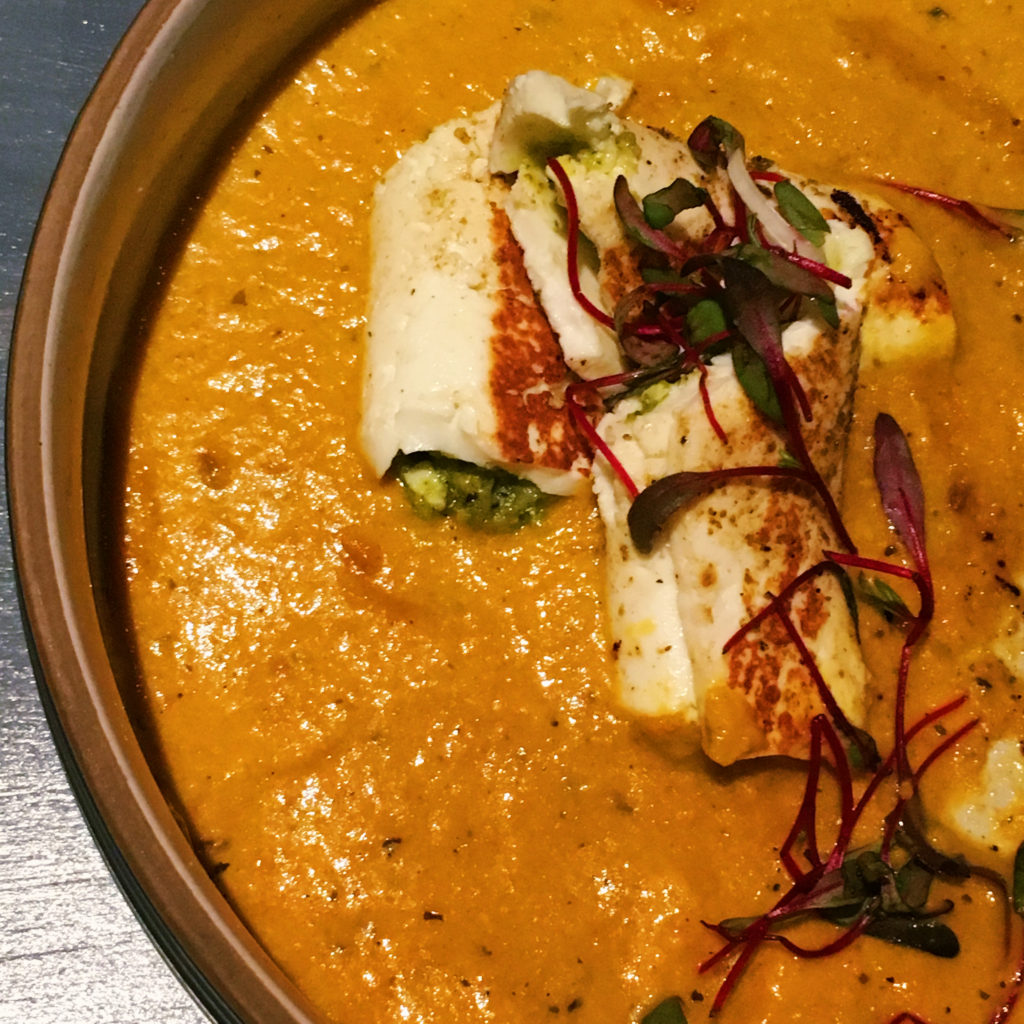 The Paneer was a dish I didn’t think we needed at first; however, I’m very glad that our waitress recommended it because this was honestly the best Paneer I’ve had. Paneer, which is South Asian cheese with a texture like tofu, consisted of mint, pistachio, and fenugreek. The paneer came with a gravy sauce, which had all those complex flavors described. The Paneer was soft and not too chewy and had a great cheesy consistency. I’m so glad there was some leftover so I could eat it the next day for lunch!

If I come again, which I hope to, I would focus on getting more of the small bites since there’s such a wide variety of ingredients and flavors, and pick two to three Patiala Plates, choosing from dishes that have unique takes on them. I also really loved the decor of this place, with its vibrant colors and minimalist furniture combined with a large focal mural were stunning. I can’t wait to see what August 1 Five comes up with next.

Bites by the Beach: Leona in Venice, CA