Chang’an Restaurant and Bar in SGV

One of the best things about living in the San Gabriel Valley is the sheer abundance of Chinese food (which just so happens to be my favorite cuisine!)

So I was more than excited to have to opportunity to attend a tasting at Chang’an Restaurant and Bar along with some other LA foodies. Chang’an is literally a hidden gem, tucked away on the 3rd floor of an unassuming strip mall. I had a little difficulty finding it at first, and I hope others won’t be discouraged by its elusive location, because this place is certainly worth seeking out!

Upon entering, I was greeted by Minda Zhang, who along with her husband, Hao, runs the place. Her enthusiasm and passion for her restaurant was evident in every dish that I tried, as you’ll soon see. I was immediately struck by how modern and trendy the place felt. I suddenly felt like I was in Silverlake, not SVG. It was a very cool contrast to the bulk of the Chinese restaurants in the area which maintain a classic, if somewhat dated, decor. The bar looked equally impressive, as did a large patio on the side which would make for an inviting place to hang out with friends and enjoy a drink after a long work day. As I joined my dining companions, we lined up some bottles of wine to enjoy with the extensive tasting menu, the most impressive of which was a 2010 vintage of Ornellaia Le Serre Nuove, a Bordeaux Red Blend from Tuscany, Italy. As it was given a chance to breathe over the course of the meal, it really changed character as it opened up into some wonderfully layered flavors of fruit and spice. Our tasting began with a delightful Chang’an salad, nestled within a halo of crunchy British Cucumber. It’s comprised of deceptively simple ingredients: young crown daisy leaves (an Asian leaf vegetable also known as chrysanthemum greens) and tomatoes with roasted sesame dressing and crushed peanuts. Despite the limited ingredients, the nutty and grassy flavors combined into a starter that was both refreshing and summery. The dressing was rich, but not too heavy or overpowering. This salad is proof that sometimes simple is better, especially when the ingredients are fresh and balanced nicely. Next up was Crispy Jidori Chicken, served with an assortment of sauces. The bone-in chicken was nicely battered and had a satisfying crunch, and I enjoyed the accompanying dips; A tangy sweet and sour sauce, a homemade ketchup-style blend, and a zesty spice mix all played together nicely and added an interesting kick. A platter of grilled skewers arrived at the table and were quickly devoured among the group. I only sampled the lamb shoulder, which was tender and bursting with cumin flavor. Honestly, I’m not usually a fan of lamb because I’m not big on gamey flavors, but this was quite nice. The other options, a filet mignon, short rib, and lamb shank skewer looked equally appealing. Also part of the grilled platter was tasty beef tongue served in a little cast iron boat. Sliced thin and resting on a bed of cabbage slaw, the meat was flavorful with a mildly sweet glaze and dusted with sesame seeds and scallions. At this point, the family style dishes began arriving en masse, bringing an exciting array of color and aromas to the table.

The pork belly lunch set is one of six affordably-priced sets available during lunch, seven days a week. Other options include Mapo Tofu and Kung Pao Chicken, but I would definitely come back again for this pork belly with its melt-in-your-mouth fatty flavors, sweetened with a delicious glaze that reminded me of caramel. I also really enjoyed the banchan style accompaniments. I’m a meat-lover, but one of my favorite dishes of the tasting was the Sauteed Eggplant with oyster mushrooms, shrimp, and pine nuts. Managing to be both sweet and savory, the tender eggplant was juxtaposed with crunchy veggies tossed with earthy and smoky mushroom and soy flavors. Another standout was the Yu-Yang-Xiang soup made with home-cured napa cabbage, hot peppers, buttery fish fillets and thinly sliced lamb shoulder. I loved how spicy the soup was, and that you could adjust the heat by how many peppers you scooped into your bowl. The vinegar flavor of the cabbage added to the bright flavor of the broth, and the fish and lamb mellowed it out. A perfect balance! I also fell in love with a new menu item, Salty Egg Prawns. True to their name, these whole prawns were crusted and fried in a salty egg batter, along with a pea, corn, and carrot medley. My fellow foodies remarked how Americans often discard the best part of the prawn – the head! I admit, I’ve been guilty of that in the past, so this time I enjoyed the prawns the way they’re meant to be eaten- whole with their crispy shells intact. The result was a pleasant surprise – the heads were rich with briny flavor and the shells added a delightfully salty crunch to go with the firm flesh of the prawn. I also tried some traditional Chinese style California Black Cod, cooked in a delicate soy and ginger sauce that left room for the fish’s natural creamy flavor to emerge. This was nice treat after an array of more heavily seasoned dishes, especially since I’m a fan of whole fish in general, bones and all. (working for your food makes it taste better, don’t you agree?) Last but not least was a decadent Seared Foie Gras. This is another thing I’ve never tried before, and I admit I had my reservations simply because of how Foie Gras is made. (For similar reasons, I don’t eat veal or shark fin soup).

But I figured, when in Rome. It wouldn’t hurt to have a little taste, especially since everything else was so delicious. And yes, this too was quite tasty. I can definitely see why people seek out the flavors of Foie Gras. Paired with a sweet toast and drizzled with berry syrup, the meat was luscious and buttery, closer to a dessert than I expected. I’m glad I tried it, but I don’t think I’d order it again. But if this is the kind of thing you’re into, you won’t be disappointed. 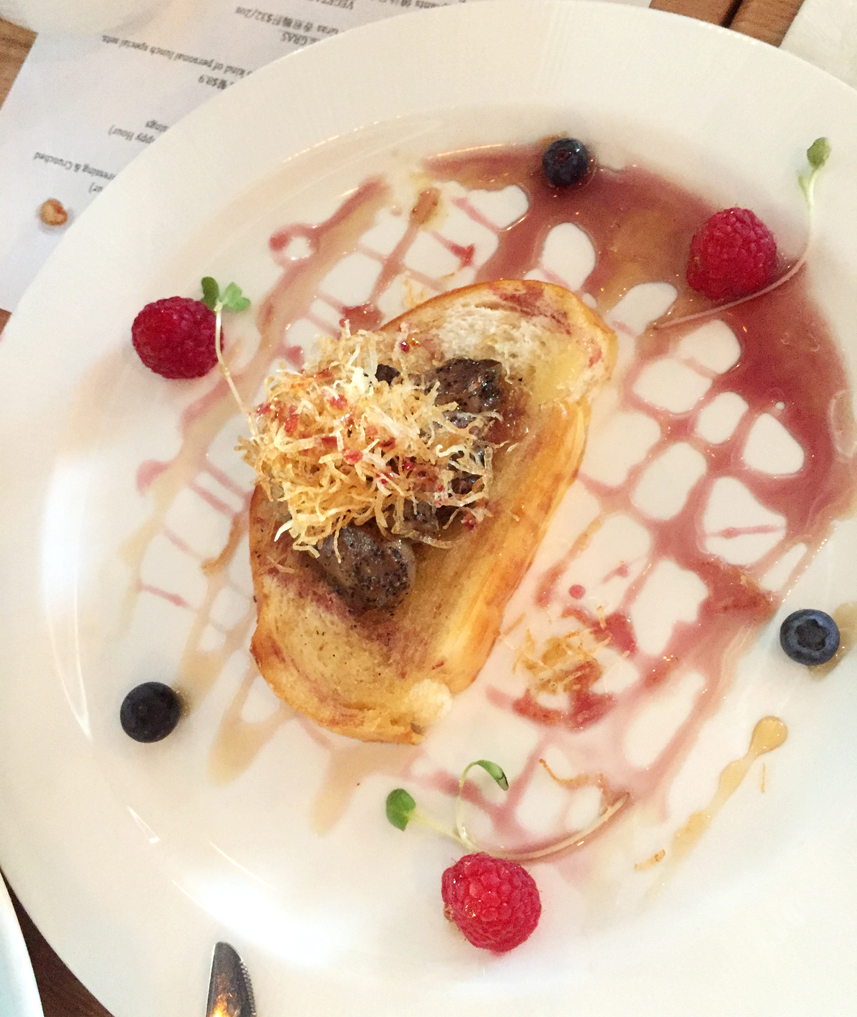 I really enjoyed sampling the many flavors of Chang’an along with some fine company and fine wine. I’ll definitely be bringing friends back here for happy hour, which happens every day of the week, twice a day. Cheers to that! I hope word of mouth continues to spread about this place, because it truly is a labor of love, and it deserves to flourish. So if you ever find yourself in San Gabriel Valley, look up to find your next great meal on the third floor of the Hilton Plaza.