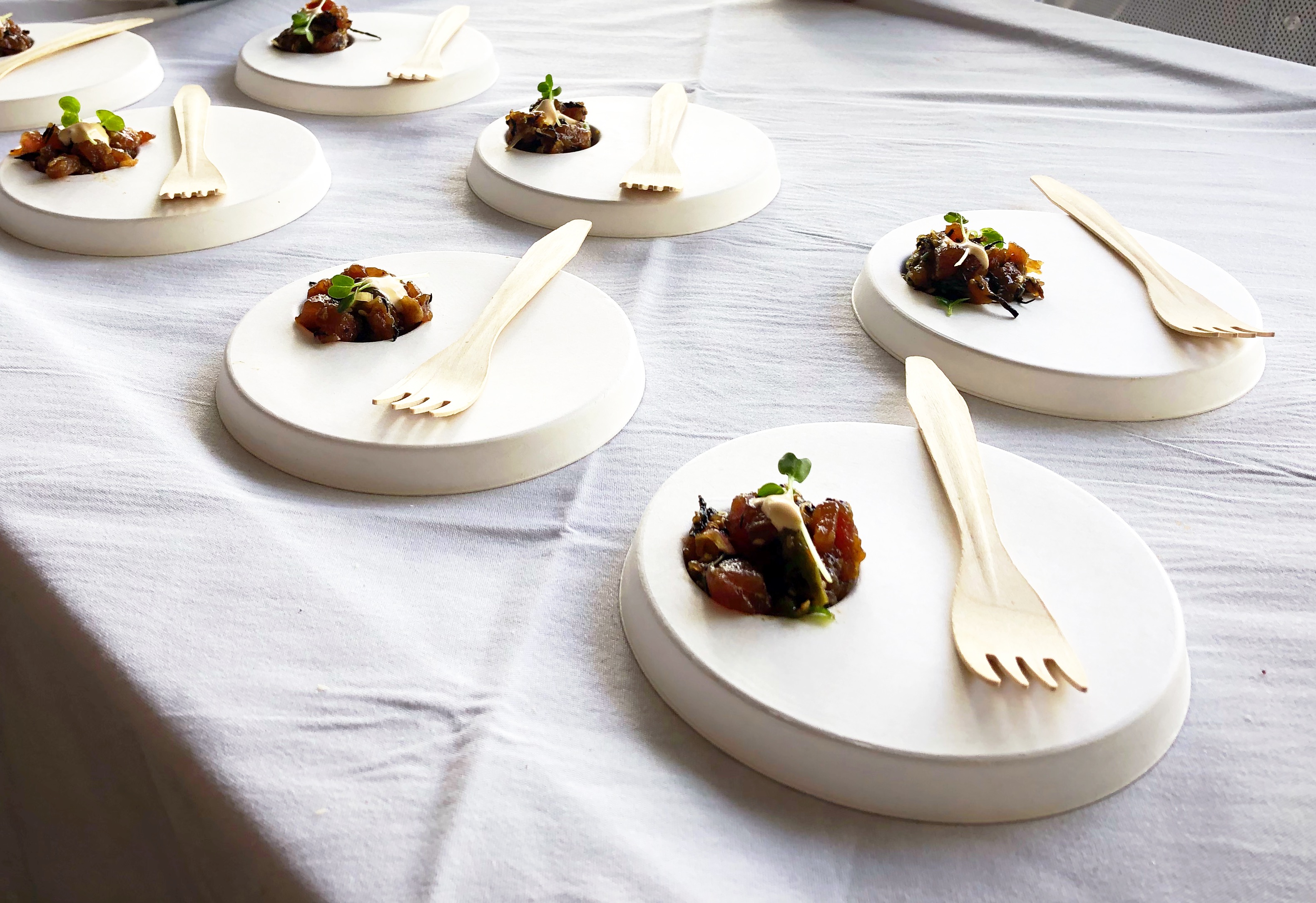 Powerhouse Chefs Demonstrate Their Best Bites at Taste of Yountville

It might have rained a bit in Yountville last weekend, but that didn’t put a damper on the 25th annual Taste of Yountville festivities! Our weekend of food and wine kicked off with a demo by Chef Stephanie Izard (Girl and the Goat, Chicago), who shared her recipes for shrimp toast (paired with a beer cocktail) and chocolate peanut butter Cheez-It® s’mores. 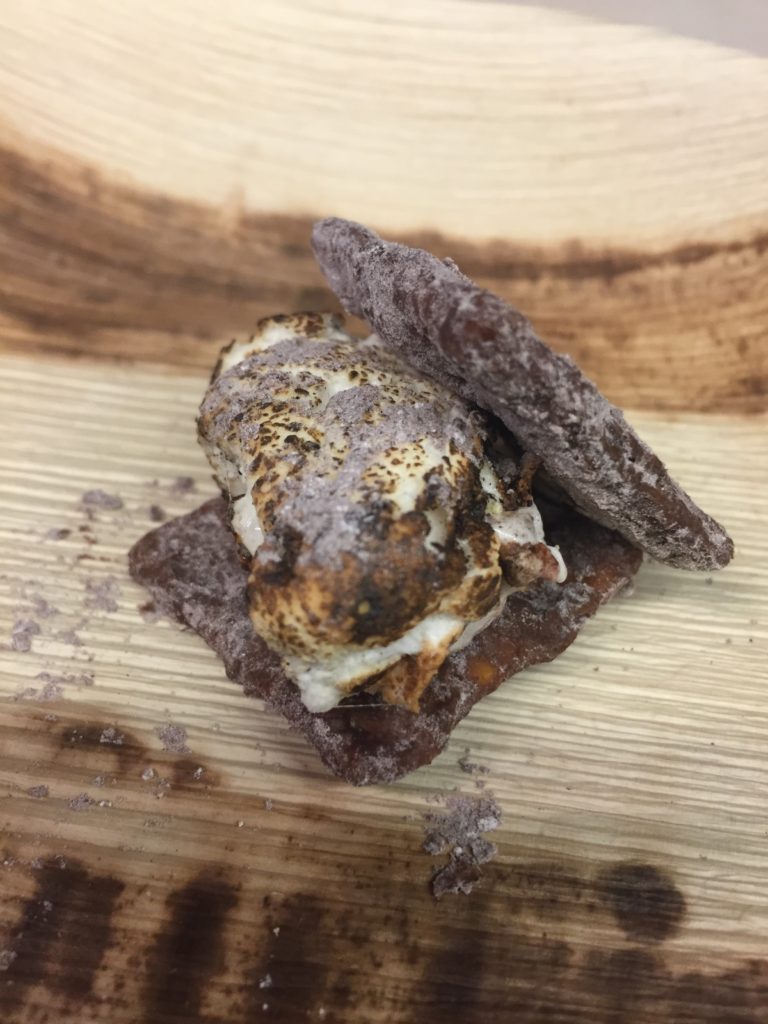 Fun fact – did you know she actually had a Cheez-It® wedding cake? Yes, she’s THAT into them… and after tasting those s’mores, I think I am too! Chef Izard melts together butter, chocolate and peanut butter and pours that over Cheez-Its® before adding a mix of cocoa powder and powdered sugar, tossing to ensure each cracker is evenly coated. All that’s left to do is toast your marshmallow and get to sandwiching! The salty-sweet combo is to die for, and tastes almost like a Butterfinger bar. Chef Izard’s shrimp toast, topped with pickled Fresno chiles, was delicious – especially paired with a cocktail that incorporated the chile pickling liquid. 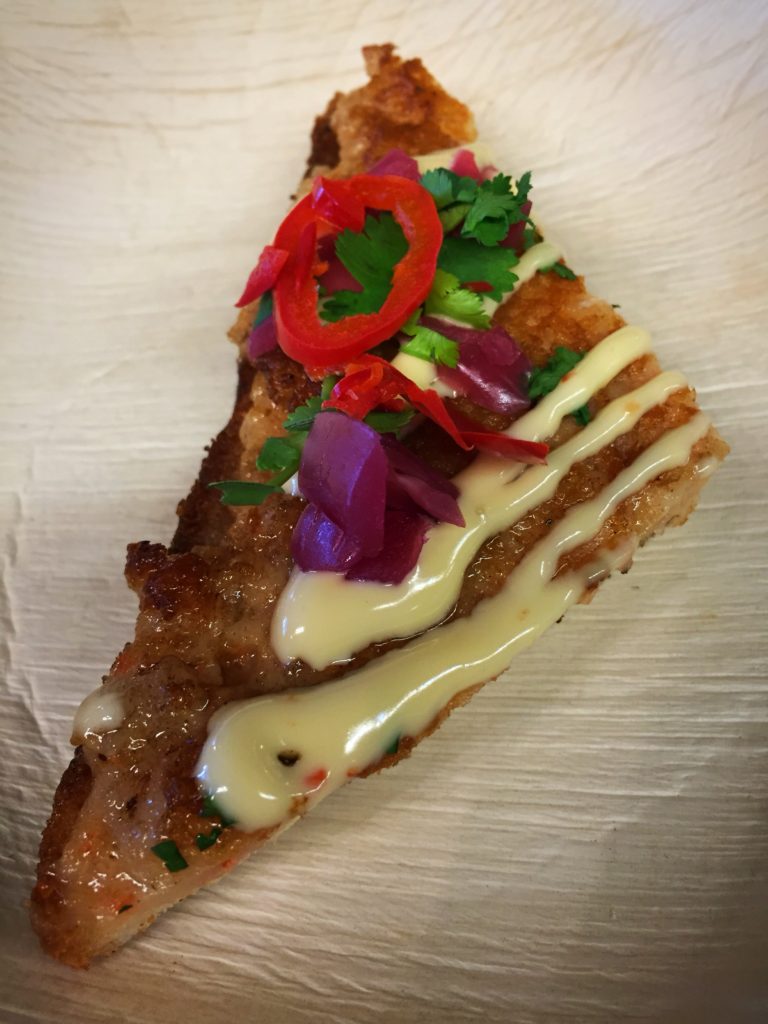 We braved a quick run in the rain to make our way over to the V Marketplace Pavilion, where dozens of restaurants and wineries were showcasing their wares. After sampling some small bites, including ahi tuna poke from Celadon and black cod with pickled kumquat and meyer lemon aioli from Robert Mondavi Winery, we headed over to the Lynx-sponsored stage to watch Frank Bonanno teach us how to make ricotta. 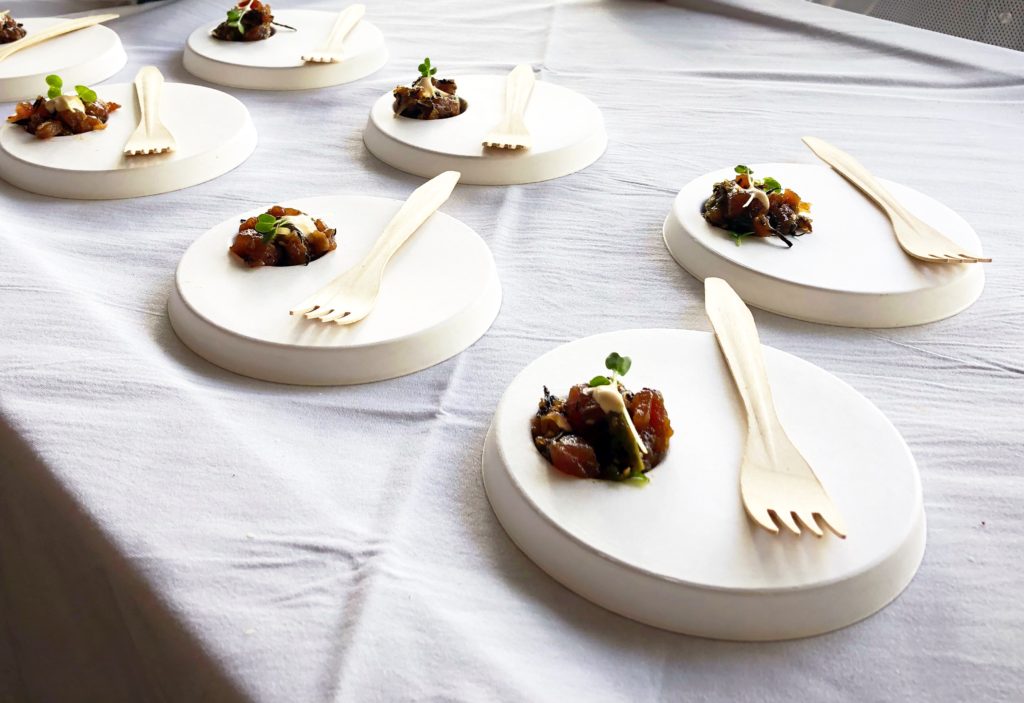 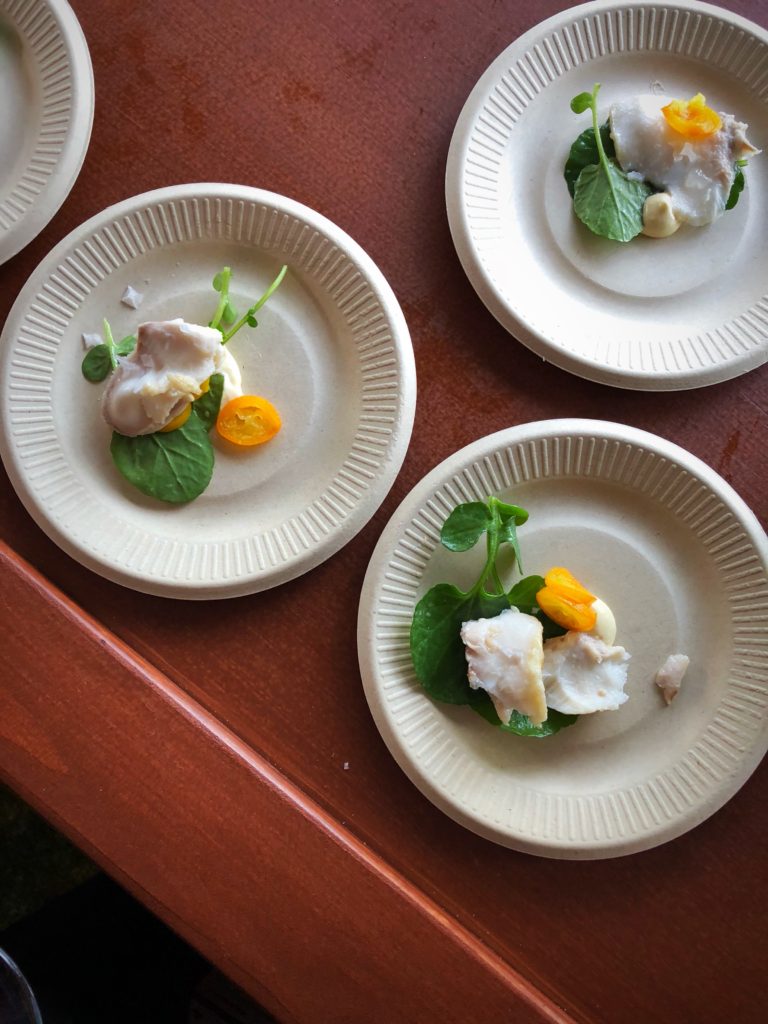 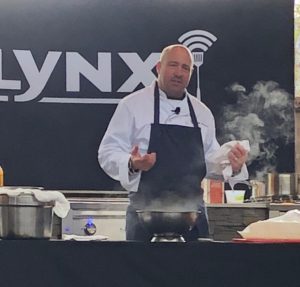 He started by combining a half-gallon of whole milk, 1 cup cream, and 1 cup buttermilk in a saucepan. After bringing it up to about 180 degrees, he added cider vinegar. As soon as he added the acid the mixture began to curdle, and after a few minutes of sitting in a fine-mesh strainer, the ricotta was ready! Spread on crostini, the ricotta was perfectly creamy with a delightful tang from the buttermilk. It might be a simple hors d’oeuvre, but it’s a showstopper!

Next up was the last event of the day: Michelin-starred Chef Ken Frank on how to make the perfect steak. You better believe I was taking notes! His tips started with buying the thickest cut of steak you can, emphasizing one big steak for sharing rather than a few smaller, thinner steaks. The benefit to a thicker steak is that there’s more room to nail the internal temperature, more time to get a great sear on the outside before the inside overcooks, and more room to get that delicious crust on every side of the steak. He got his pan ripping hot and seared the steak all over before letting it rest for a few minutes. As a general rule, he lets meat rest half as long as he cooked it. Then, the steak went into the oven to finish cooking. When it hit the perfect medium-rare he was looking for, he rested it again and, right before serving, tossed it in the pan one more time to get the outside super crisp. But the most important trick of all? Rest your meat on its side, not on the top or bottom, to get the most even distribution of juices. 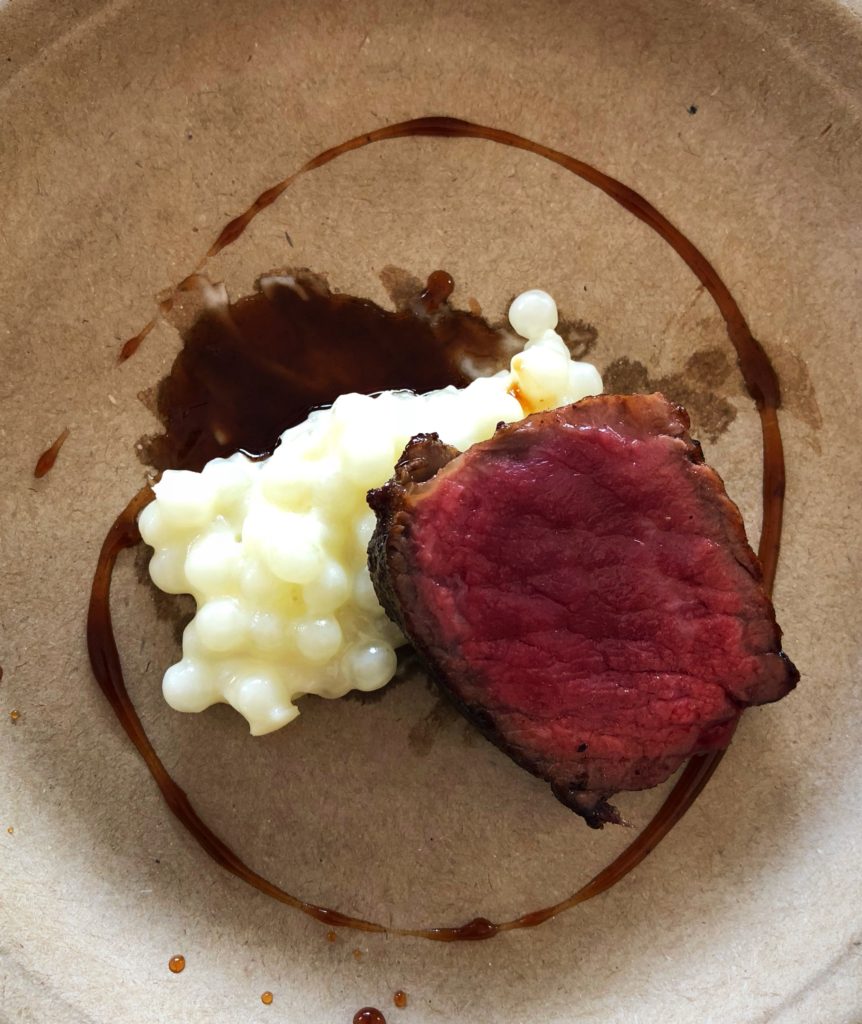 The perfect steak – and no, that’s not hyperbole.

One bite of this steak, which was served alongside cheesy tapioca pearls, and I was in heaven. The steak was paired with a delicious Cabernet Sauvignon from Eleven Eleven wines. Chef Frank noted that he drinks cab every day – and we should too! That’s some advice I can definitely get behind.

Day two started off beautiful, without a single cloud in the sky. We started off the day learning the secrets behind Lisa Dahl’s incredible “Hipster Burger” (spoiler alert: lentils and quinoa provide heft, toasted walnuts add texture, and serrano chili oil is the ticket to great flavor). She also shared her tips for making the perfect kale salad: thinly shredding kale, then tossing it with a Greek-influenced vinaigrette before adding Caesar dressing. Thanks to the acid in the vinaigrette, the fibers in the kale soften and break down – the days of massaging kale are over! 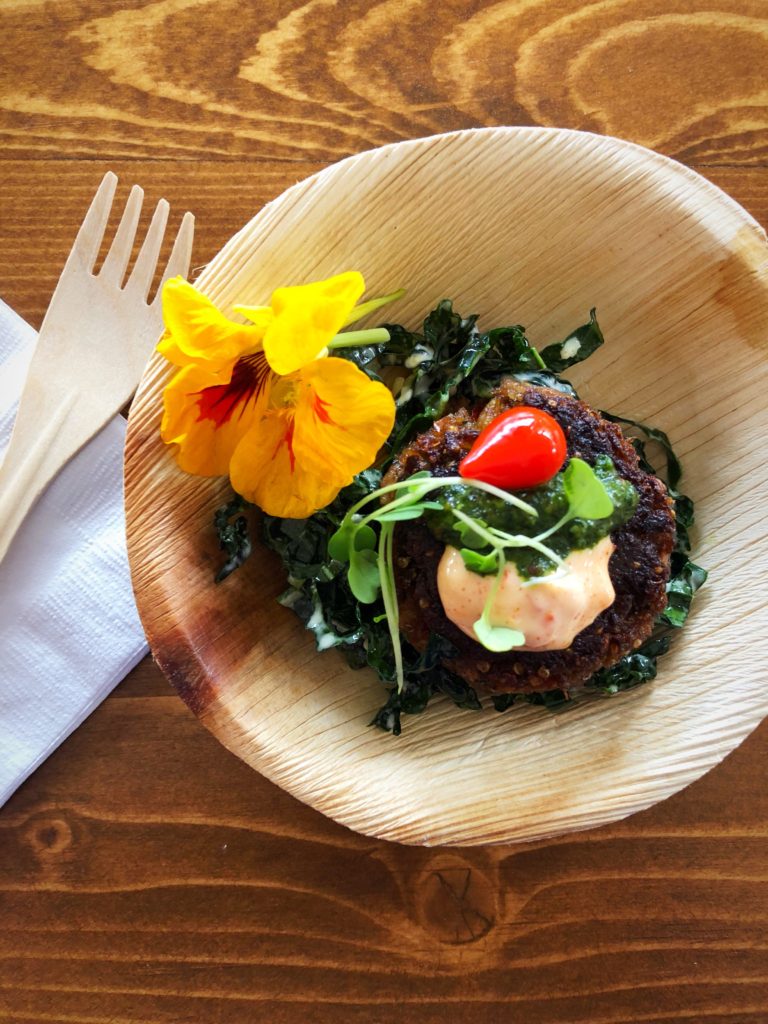 One of the most interesting presentations was an unlikely pairing – raw seafood and Pinot Noir. Featuring a flight of Twomey Pinot Noir, the dishes included Hamachi crudo with kumquat and avocado, tuna sashimi with cherry and red wine-steeped hibiscus, and a raw oyster topped with smoked soy sauce and toasted hazelnut. The takeaways from this presentation? Step outside of the box when it comes to pairings. Note how different ingredients change your perception of wine. Save money on garnishes by buying better main ingredients. Most importantly, take the time to learn about what you’re drinking and eating. Much like wine, food is heavily influenced by where it comes from. 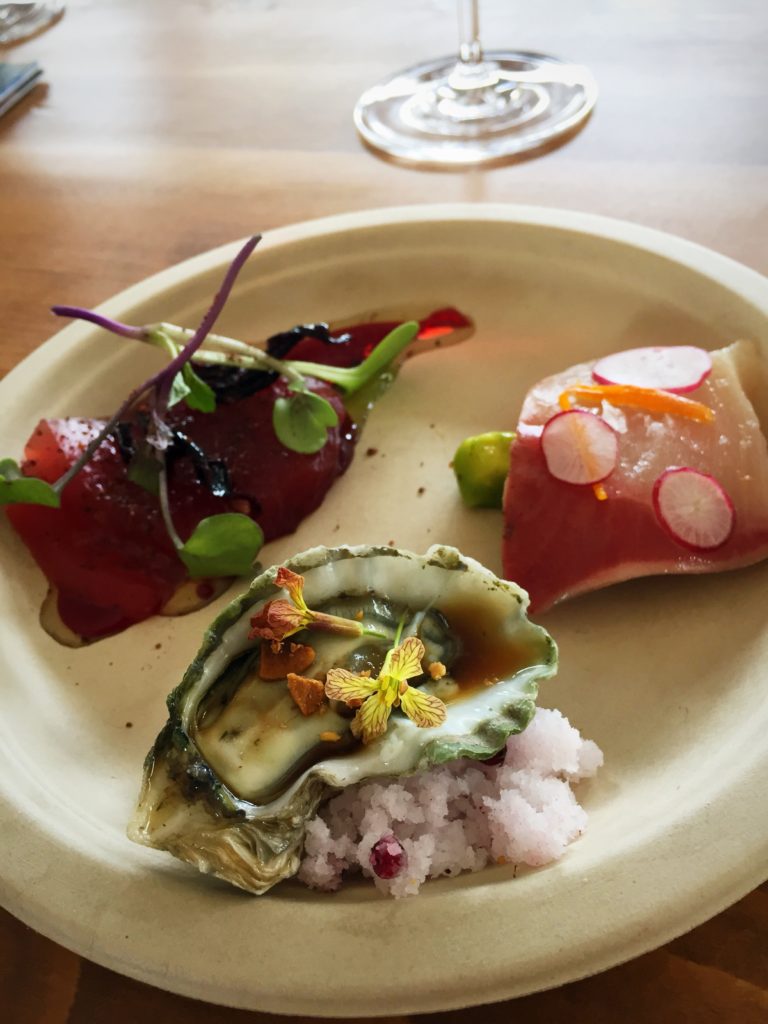 After a long weekend of food and wine – tough life, I know – it was time to head home. I’m already counting down the days until next year, but until then you can find me perfecting steak, drinking red wine with sashimi, and coming up with more Cheez It®-inspired desserts. Cheers!

A portion of the proceeds from this event benefited the families of those lost in the tragic shooting at The Pathway Home earlier this month. For more information and details on contributing to the fund, click here.