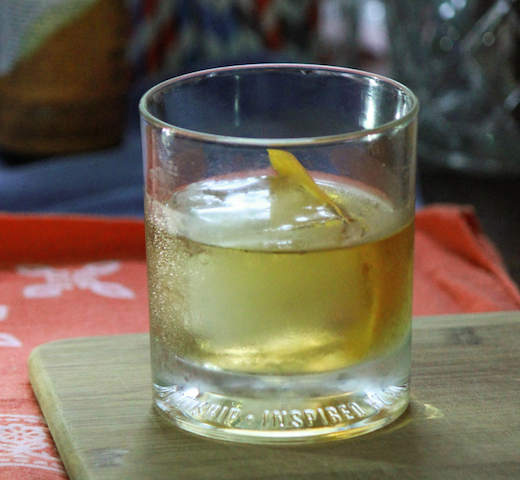 Recently Girls on Food was offered a chance to collaborate with Farmer John using their bacon in a recipe. Of course, being more of a cocktailer than a cook I put it in a drink. I’ve always wanted to try a bacon maple Old Fashioned, so I decided to start off with a bacon bourbon. 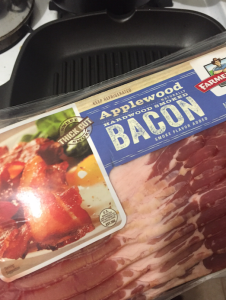 Having never made a bacon flavored liquor, I did a little researching and came across the technique of fat washing. Using the information I gathered I made my first batch of bacon bourbon. I chose Farmer John Applewood Smoked Bacon because I felt it would have the best smokey flavor to transfer to the bourbon. 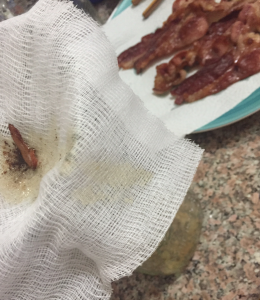 Cook the bacon. I used a broiler pan so that I could collect the oil without the bacon frying in it. When bacon is done, let the bacon grease cool enough, so that it doesn’t cause burns but not solidified yet. Add all the grease, one piece of bacon cut in 1″ pieces, and bourbon to a jar. Let this sit on the counter until it cools to room temperature and then transfer it to the refrigerator and let it sit for a few days. When I was ready to strain it, I put it in the freezer for about an hour. The first strain got the larger bits of bacon and solidified fat out via a cheesecloth lined colander. 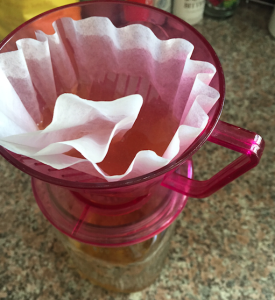 But to get as much fat out as possible, I then put it through a paper coffee filter. And voila! Bacon bourbon. The results are a sweet, lightly “bacon-y” bourbon with a mild aftertaste of smoke.

At the suggestion of a friend, I also tried another batch where I added about six pieces of cut up cooked bacon to the mix instead of just the one slice. This batch was much more “bacon-y”, but I found it too weird to drink… It was too much like drinking bacon juice and just a little unsettling feeling. However, if you want to go extreme, try adding a few more slices to the mix!

And of course, the resulting cocktail! 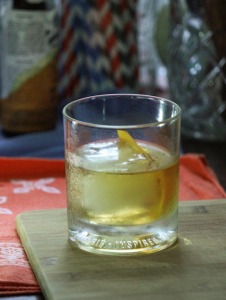 In a rocks or old fashioned glass add Maple Agave Sweetener (I found this at Trader Joe’s and liked the viscosity better than regular maple syrup), bitters, and bourbon. Add ice to fill 3/4 of the glass or just one large cube if you have it and stir to proper dilution, around 24 times around. Garnish with the orange peel by expressing the oils over the glass and add a piece of bacon if you like!

The Buffet at Aria, Las Vegas

Growing up Italian I am predisposed to enjoy good food and wine. In fact I would probably be excommunicated from the family if I stopped eating any major food group (or just mercilessly ridiculed). Being raised on wine and loud family gatherings it is no surprise I ended up behind a bar. I’ve been bartending for almost 9 years now with my focus being on craft and classic cocktails. I'm honored to be a two time regional finalist for the prestigious Diageo World Class bartending competition and a partner in The Traveling Speakeasy; a company focused on providing cocktails for private events and bar consultations.I’m continually futzing around with new recipes and techniques at home and at work, I look forward to sharing with you my original recipes and favorite bars.