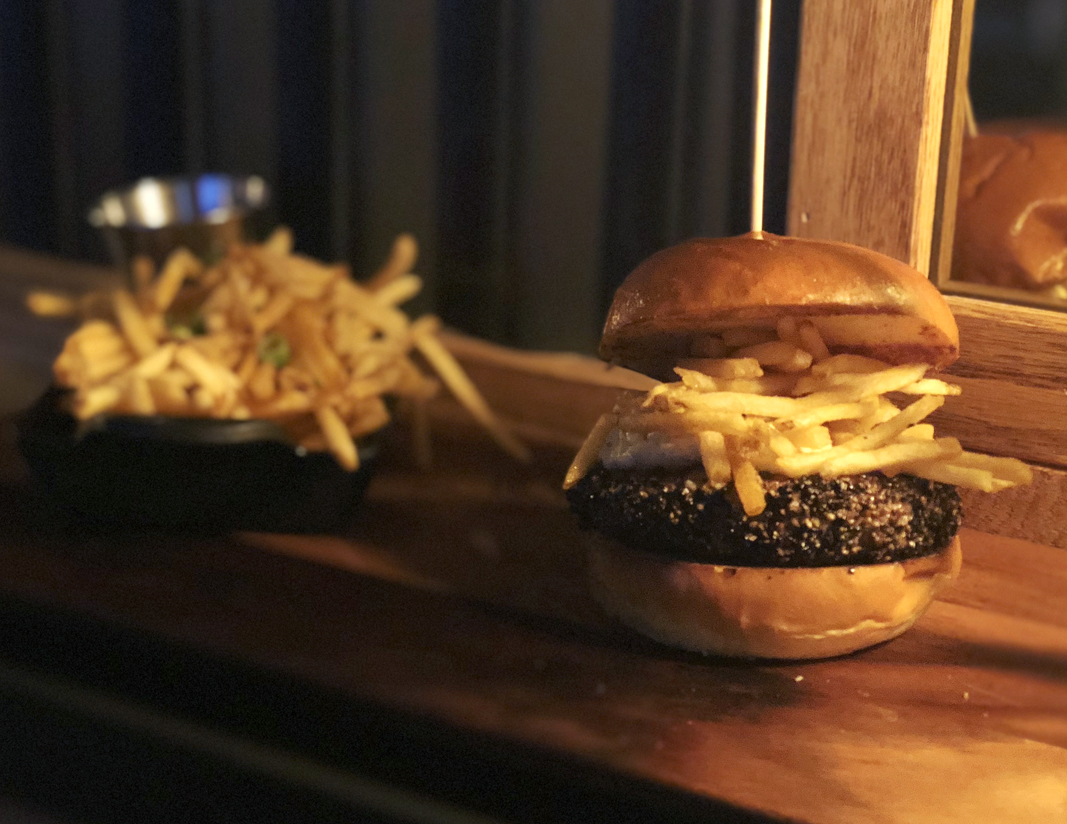 MEDIA TASTING: The Thirsty Merchant in Valley Village, CA Brings Out The Kid In Us!

Los Angeles, I’ve just found your new go-to summer hangout! If you’re looking for good drinks, good eats, and fun games in a laid back but classy atmosphere, look no further than the Thirsty Merchant in Valley Village. 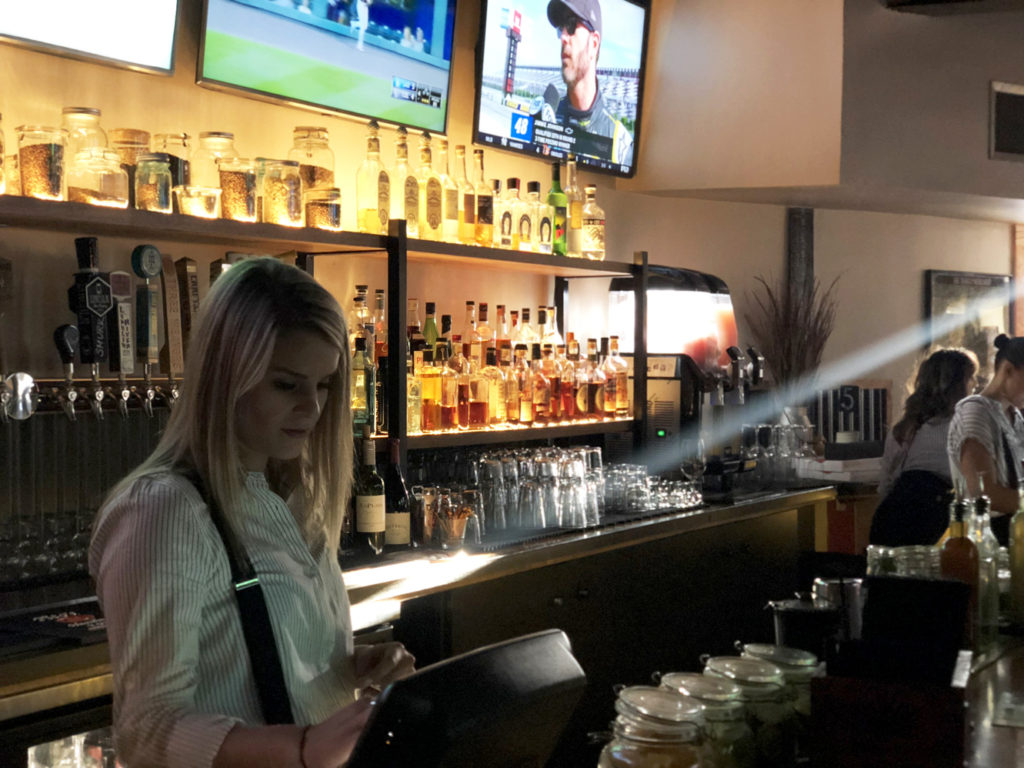 I enjoy watching and playing games as much as the next girl, but I usually avoid my local sports bar because I’m not interested in jockeying for a spot at the pool table with a bunch of annoying bros.

Thank goodness for the Thirsty Merchant. Not only are there plenty of games to choose from (bocce ball, foosball, corn hole, darts—even giant Connect-Four!), but the vibe is warm and inviting with an elegant Victorian-inspired twist. We had a lot of fun playing these bar games, especially darts. It makes me want to buy my own so that I can play with it whenever I want too, (and to improve on my skills that I seemingly don’t have). My friend who has her own dartboard told me that if I was seriously considering getting one, that I should have a look at the reviews from somewhere like 1 Hattrick so that I can get one that I know would be best for me. I will definitely have a look when I get the chance, but for now, I am enjoying my time in this bar. The bar is impressive, and they offer a wide selection of beers, but they also have an excellent wine and cocktail list for those like myself who aren’t into brews. 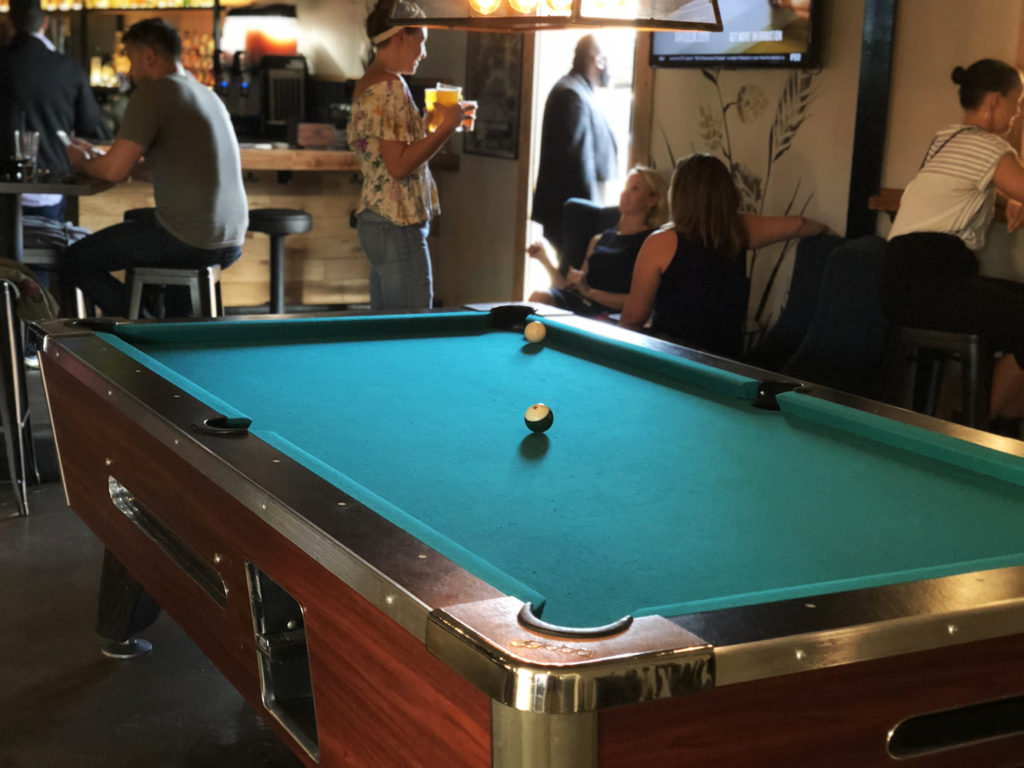 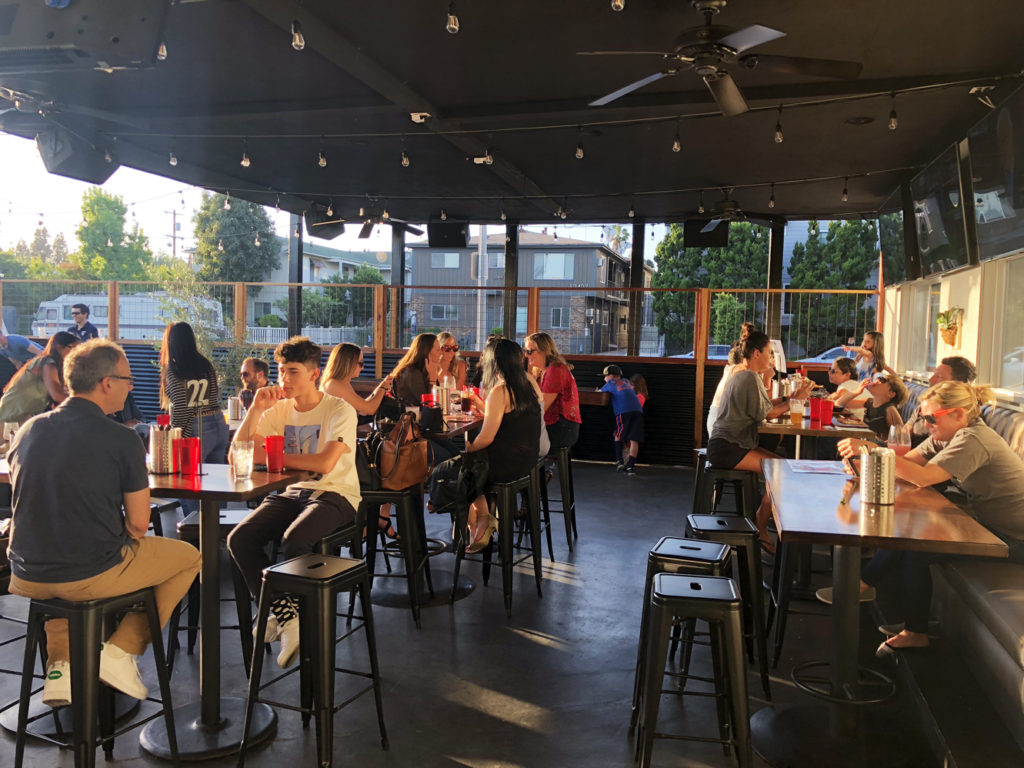 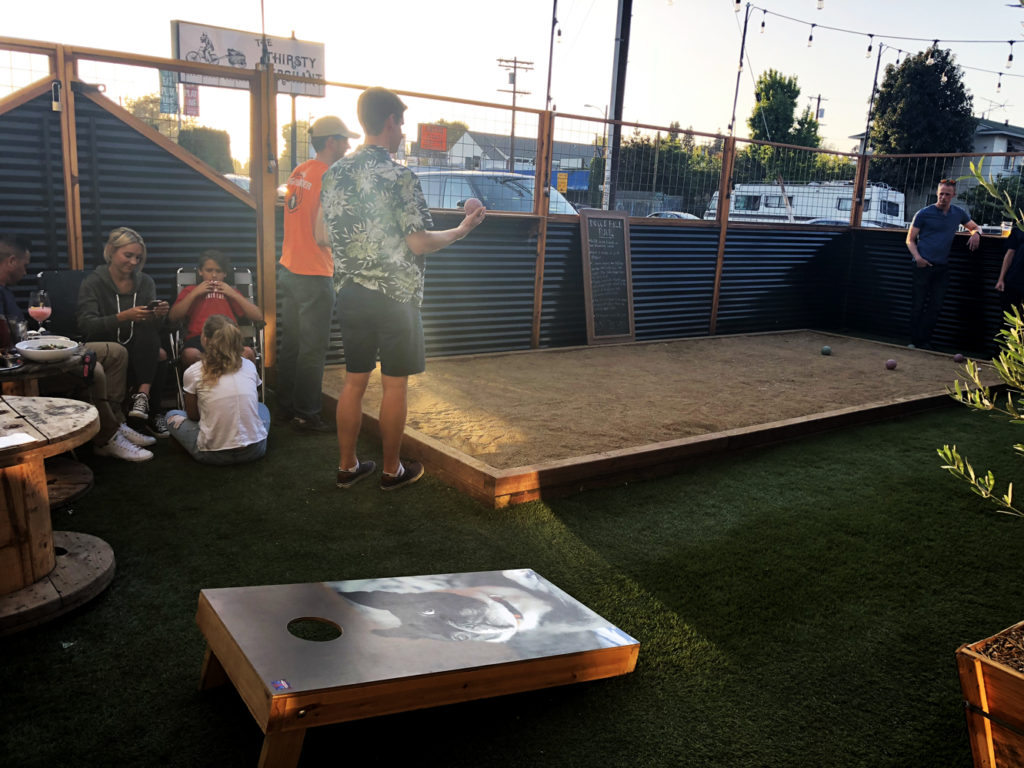 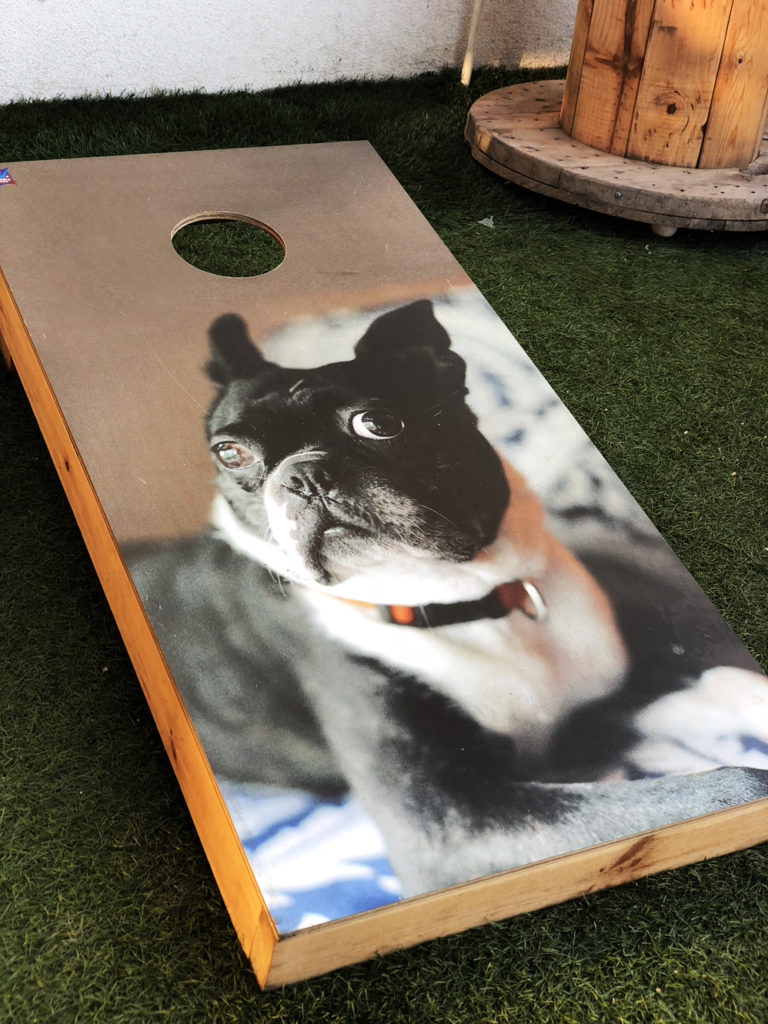 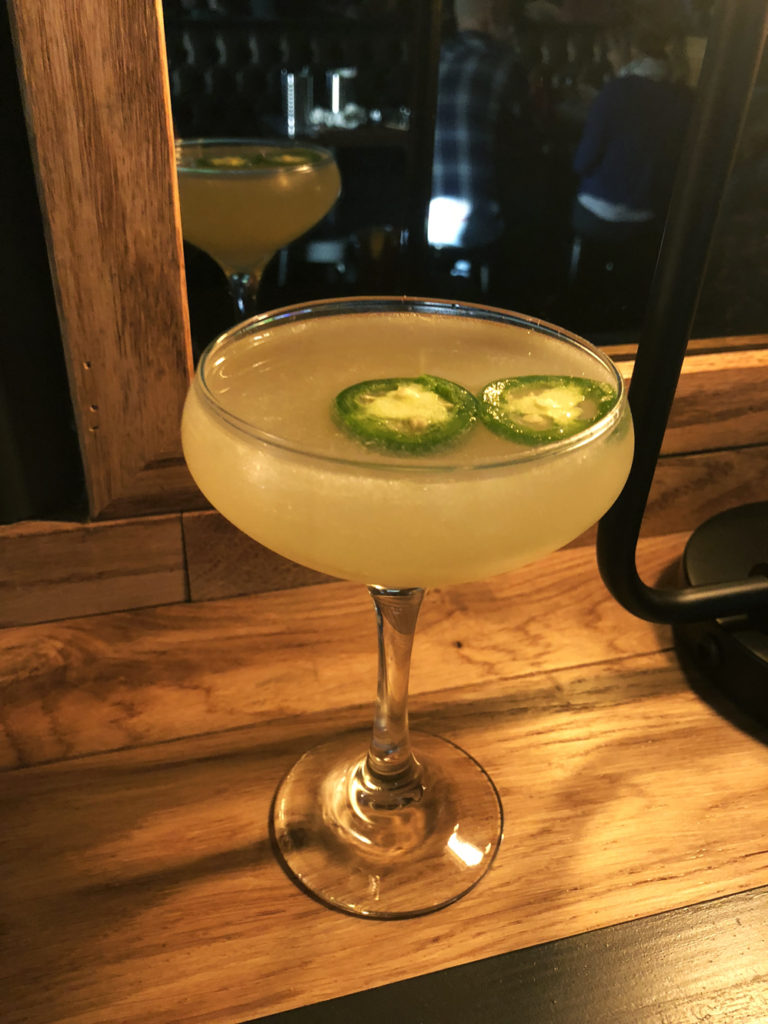 Upon arriving, my companion and I settled into a cozy, dimly lit booth and perused the menu. We decided to start off with a couple of spicy drinks to get things going. He ordered a Hot Lips cocktail made with jalapeño infused vodka, mezcal, lime, pineapple juice, and vanilla simple syrup. I ordered a Merchant Mary with Bang Bang Shrimp Cocktail from the “Day Drinks” menu (which, by the way, accompanied a rather appealing weekend brunch menu that I intend to return for).

The Hot Lips definitely did as its name implied- it made my lips tingle with flavor. I know spicy drinks aren’t for everyone, but if you enjoy heat, definitely try this drink out. It has a smoky taste on the front end, builds into a zesty jalapeño burn, and softens with the sweet vanilla finish. Delicious! 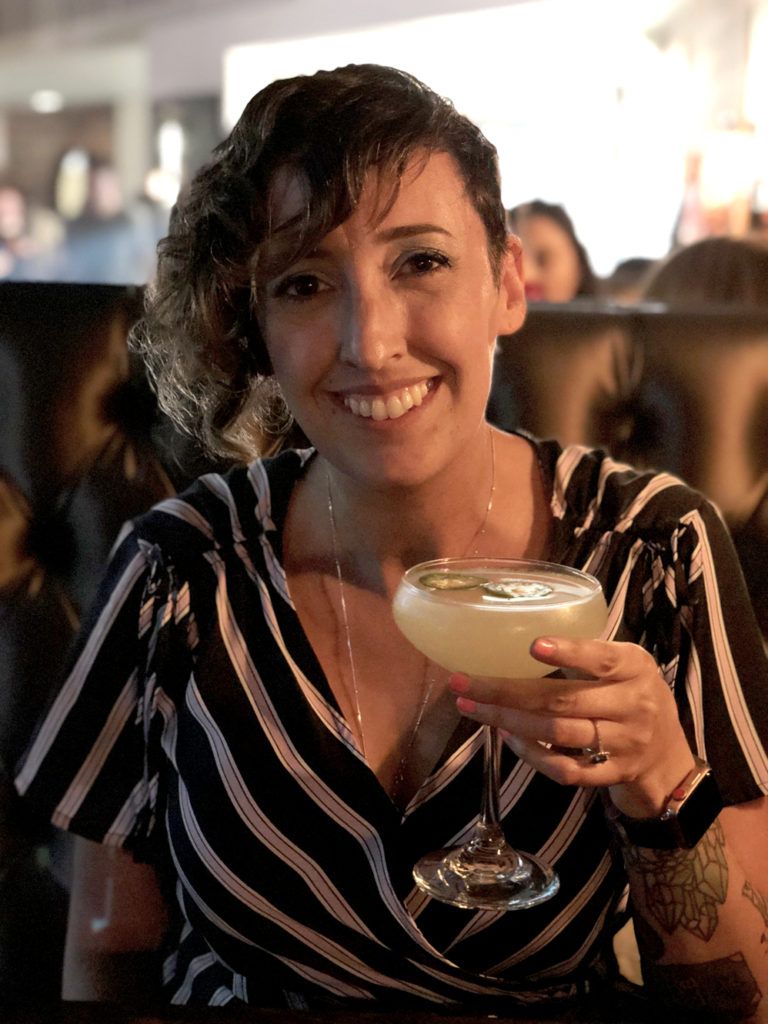 The Merchant Mary was also a very solid Bloody Mary, though after trying the Hot Lips, it didn’t seem spicy enough for my taste. But the mix is fresh and made in house and had all the right elements – including a refreshing celery flavor that I really enjoyed. Be careful with this one though… it makes for some really easy drinking, and I didn’t realize how strong it was until I finished it. Oh, and did I mention the zesty and meaty shrimp that was the prize at the end of the drink? (Or are you one of those people who eats all the garnishes first? No judgement here!) 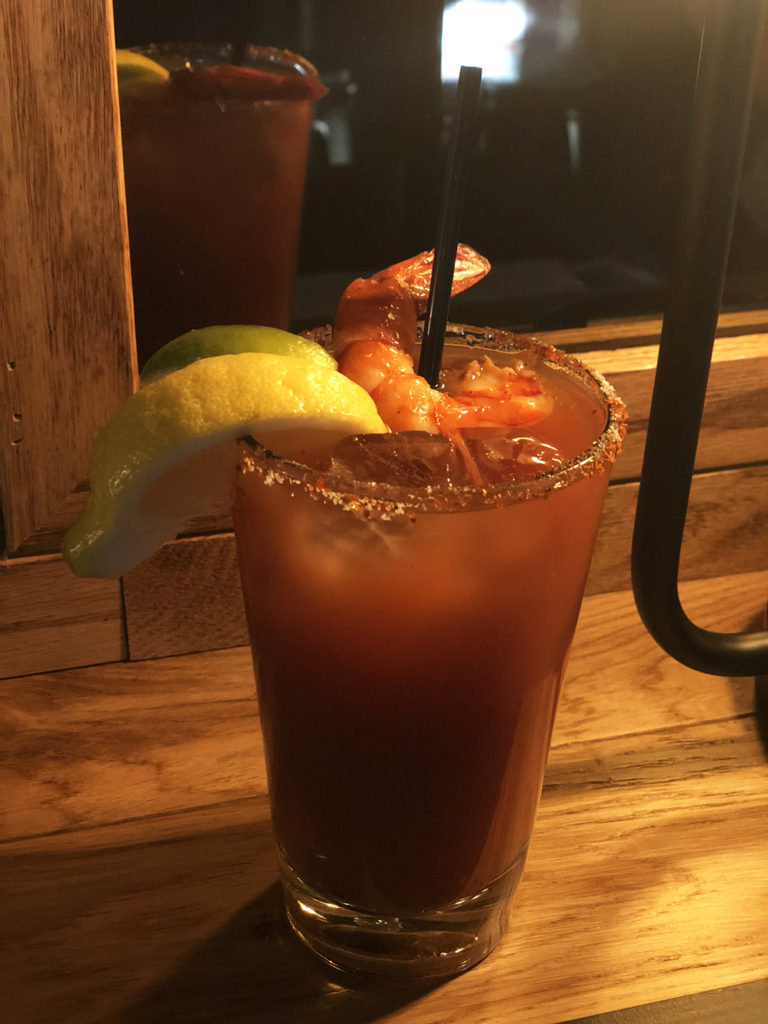 For an appetizer we tried the Roasted Shishito Peppers which were UH-MAY-ZING. Who would think such a simple dish could be so delicious? For me, it was all about the perfect char and garlicky vinegar dressing the peppers were dressed with, and the equally mouthwatering truffle aioli that accompanied them. I could have eaten a bucket of these, but I had to save room for the rest of the night. 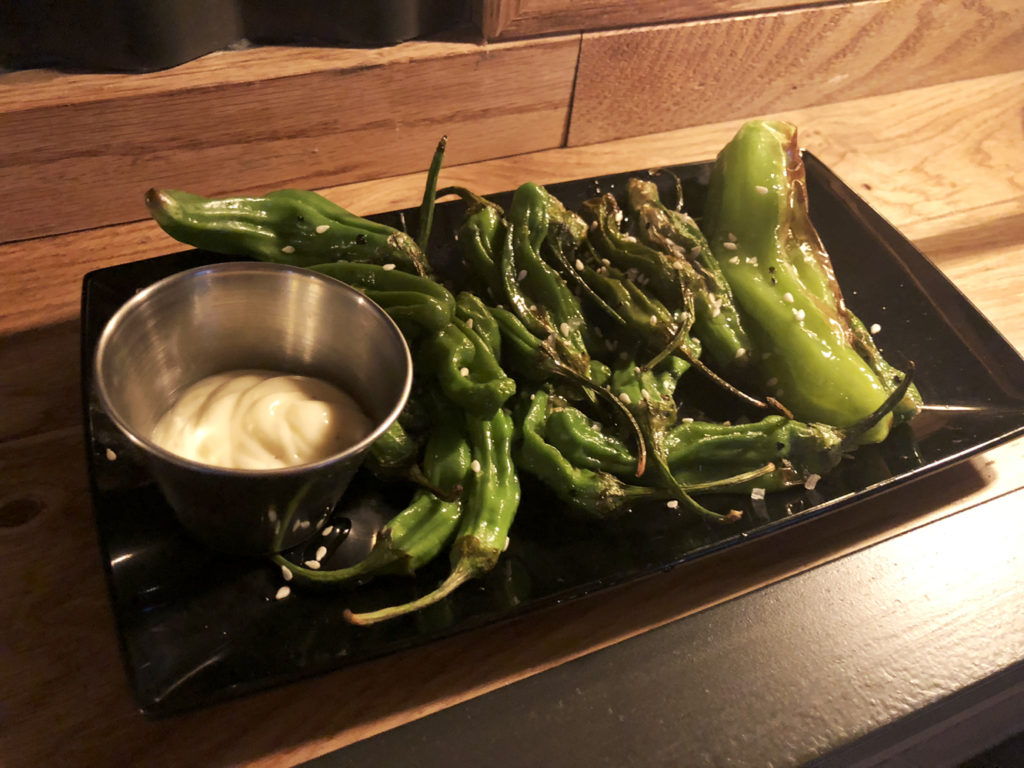 We also tried a Sonoma Salad before diving into the main course. This salad is a refreshing summer treat made with crisp butter lettuce, roasted corn, candied walnuts, and dried cranberries, tossed with a light champagne vinaigrette and feta cheese crumbles. It would make a great meal on its own with some added protein like chicken or shrimp. 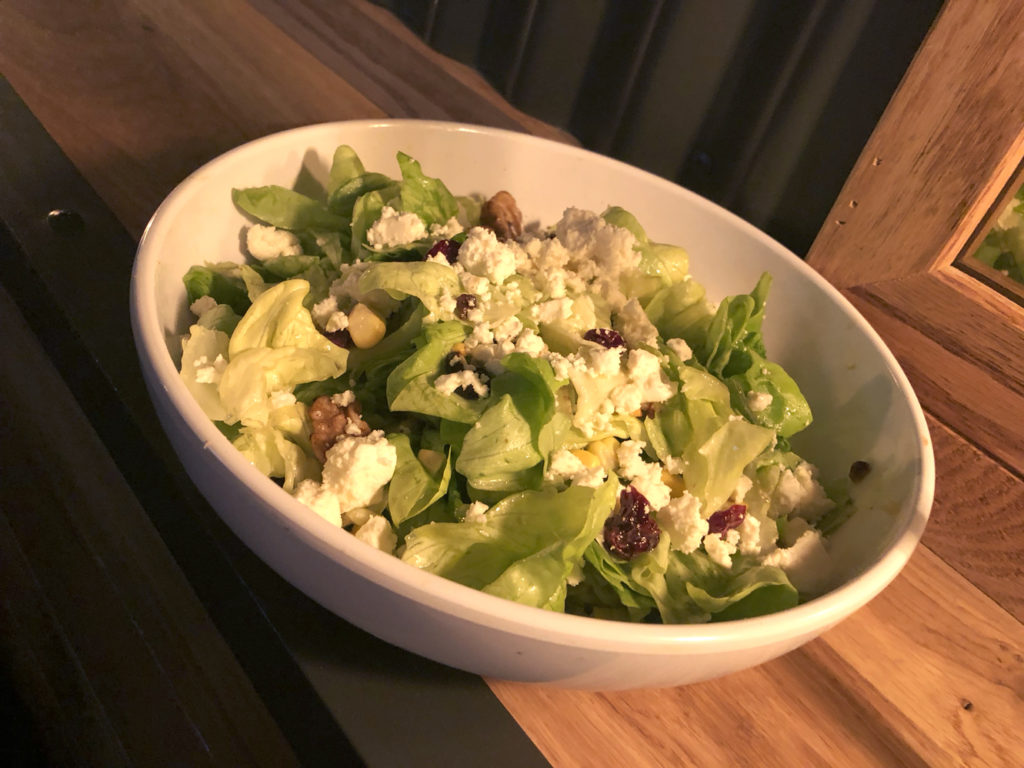 There were a lot of other appealing appetizers that would make for good sharing with a group of friends, such as steak tips and pan-fried dumplings, but we decided to order something more hearty for our main course. After trying the shrimp in the bloody Mary I was tempted to go with the Louisiana Bang Bang Shrimp, but ultimately I decided to go with the Bistro Burger. My companion took a Southern route with the Southern Livin’ fried chicken sandwich.

It was time for a drink refill while we waited for our food and I simply had to try another “day drink” selection, the Frosé (“God’s gift to your mouth” as the menu states.) I have to agree. This is the perfect summer treat. I’m a sucker for frozen drinks, and this one is a delight. If you love rosé, you’ll enjoy its crisp and citrusy flavor. Plus, it’s just plain fun to drink. 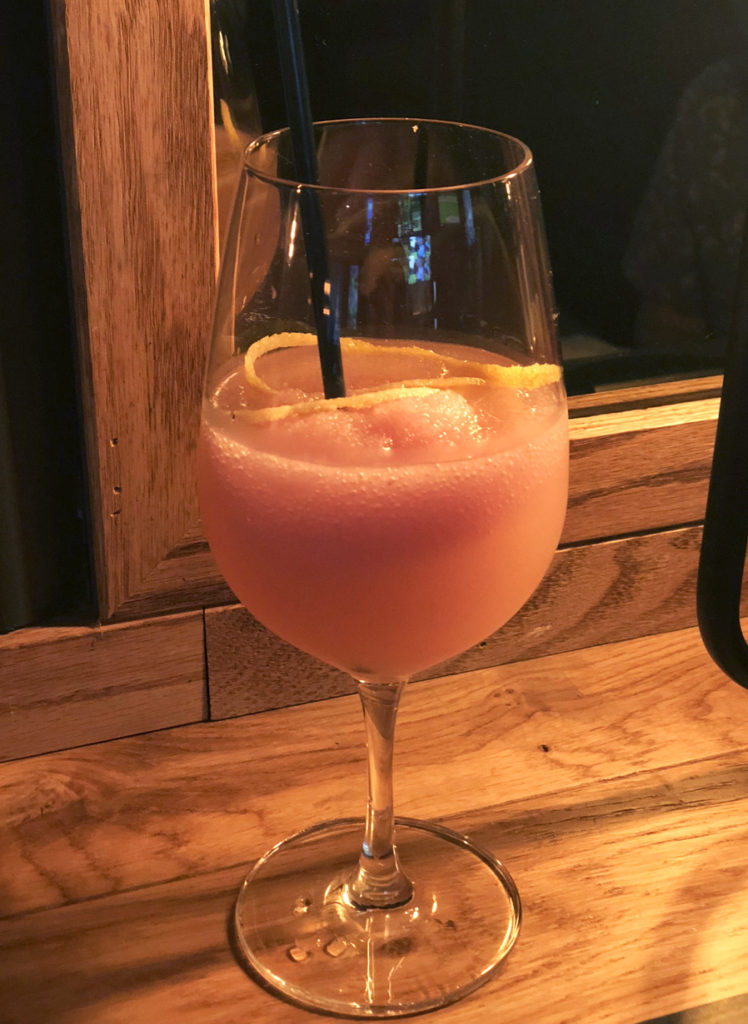 My companion got a Hotsy Tosty – another spicy drink, but more fruity and sweet than the Hot Lips. Like the first drink, it’s also made with jalapeño infused vodka, but the difference lies in the fresh strawberries, agave nectar, and fizzy ginger beer. I liked this one even more than the Hot Lips – but I’m partial to sweet and fruity drinks. You can’t go wrong with either choice. 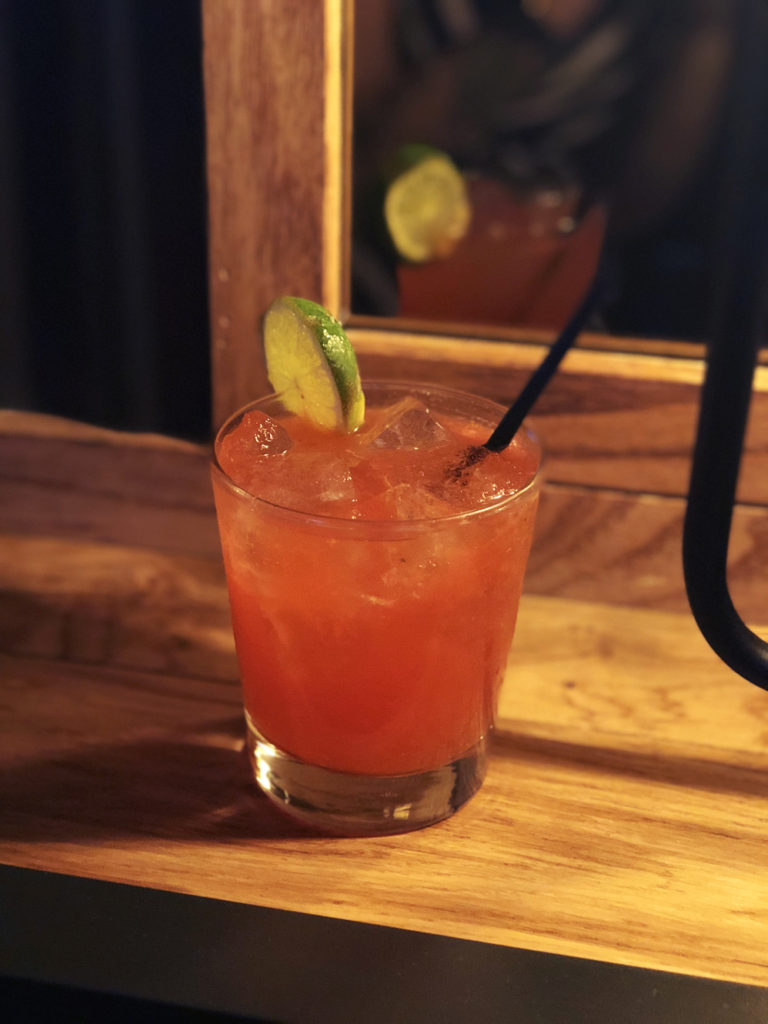 Before long our food arrived. The Bistro Burger was one of the best burgers I’ve had in a long time. The patty is ground in-house and crusted with pepper, topped with Boursin cheese and shoestring fries.

The burger was bursting with flavor – it had a hint of heat from the pepper tempered with creamy garlic from the cheese. It was as close to the feeling of having a fancy picnic with summer sausage and cheese as you could get in a burger. The shoe string fries were also perfectly crisp and the burger came with an additional side of them as well. I ate the whole thing, which is rare for me when it comes to burgers. 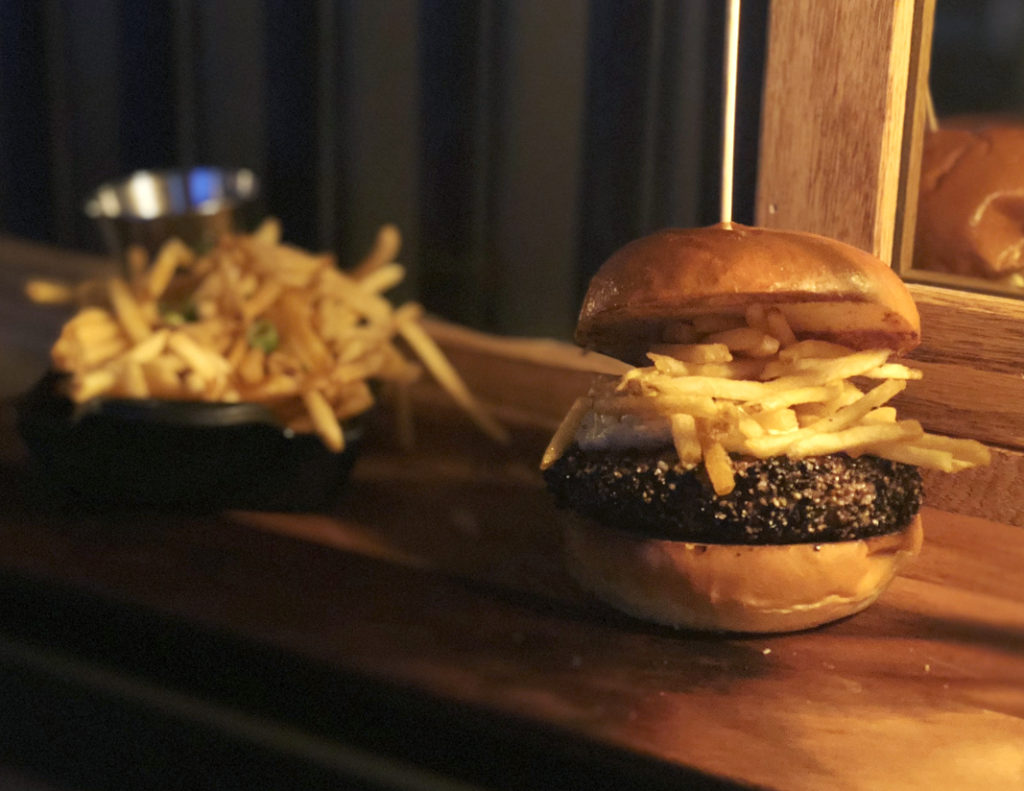 The Chicken Sandwich was equally amazing, but much heavier (as is to be expected with Southern-inspired cooking). The chicken was double-breaded with buttermilk and perfectly crusty on the outside and juicy-tender on the inside. The pimento cheese added a bit of heat, but the dill slaw provided a crunchy and satisfying cooldown. 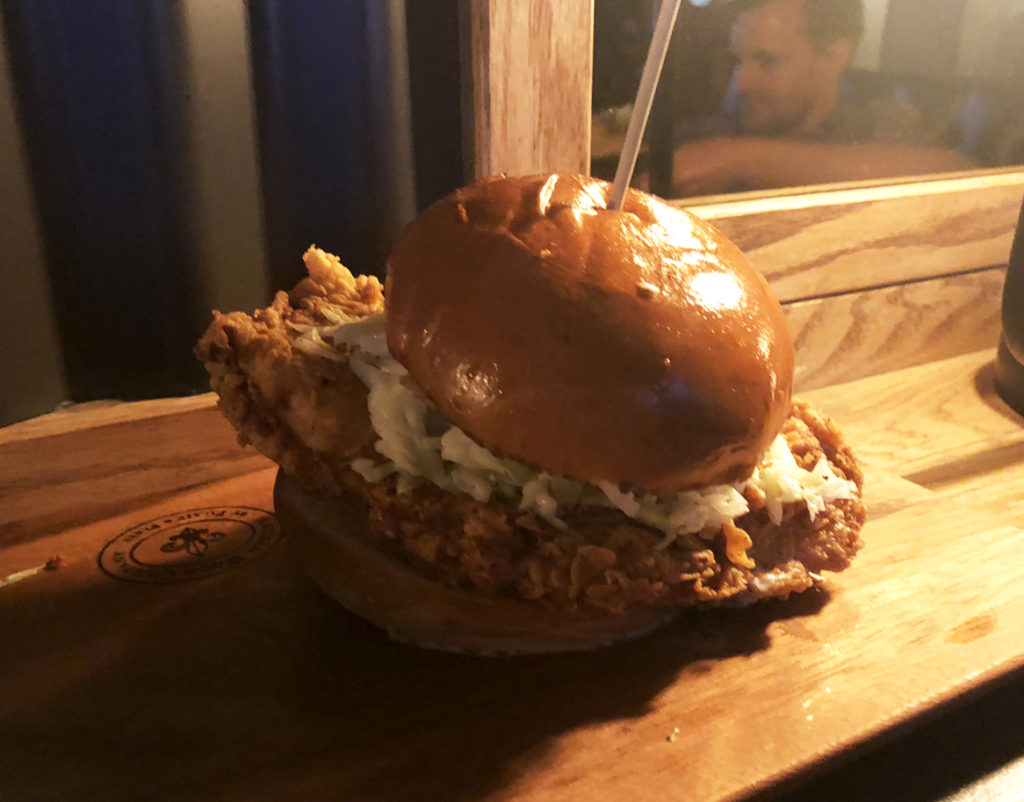 We were pretty stuffed, but we had to had to try the highly-recommended dessert: the Peanut Butter Pie. Trust me, you’ll want to order this one – it was so rich and delicious with its Oreo crust and creamy peanut butter filling. It even had a couple Reese’s cups as a topper along with crushed peanuts and a dollop of whipped cream. Peanut-butter lovers rejoice! 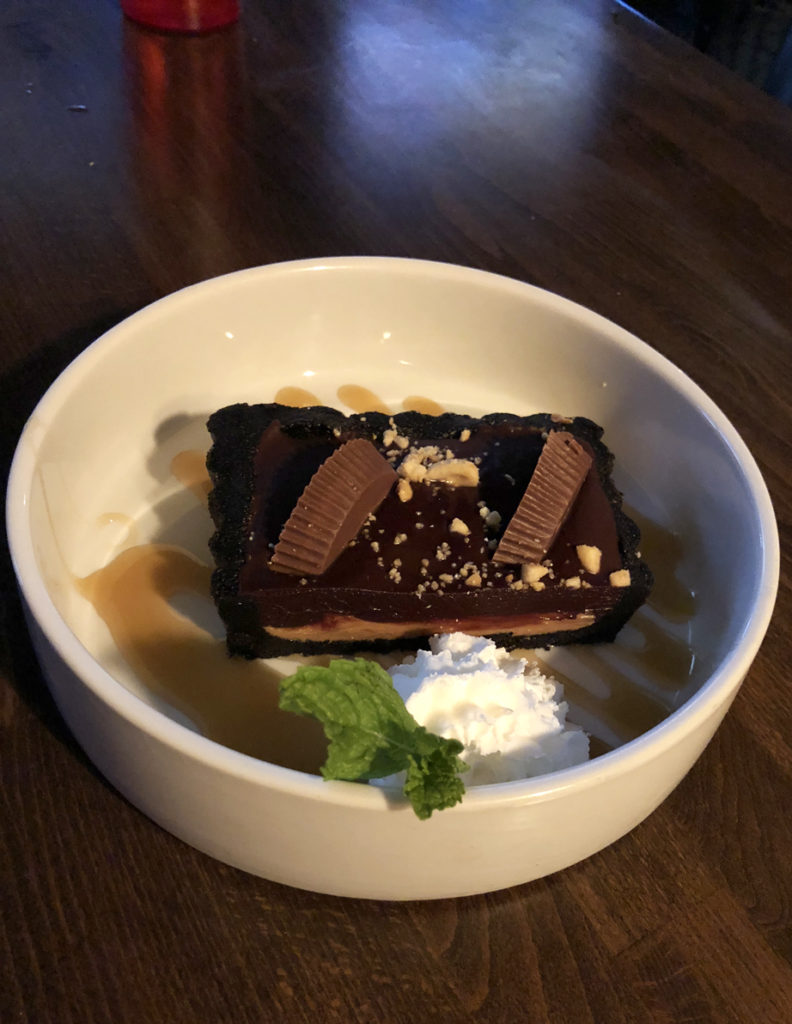 I was honestly surprised by how good the food was for a place that offers sports and games. Oftentimes at bars like these, the food is an afterthought to the entertainment, but not so at the Thirsty Merchant. Come to watch your team on one of the many screens, or get a group together to share some apps and play a round of bocce ball (or three.) Or come with a date and snuggle into one of the cushy booths and enjoy a romantic cocktail. You can do it all at the Thirsty Merchant, and I for one will be making it one of my hangouts this summer. Connect-Four, anyone? 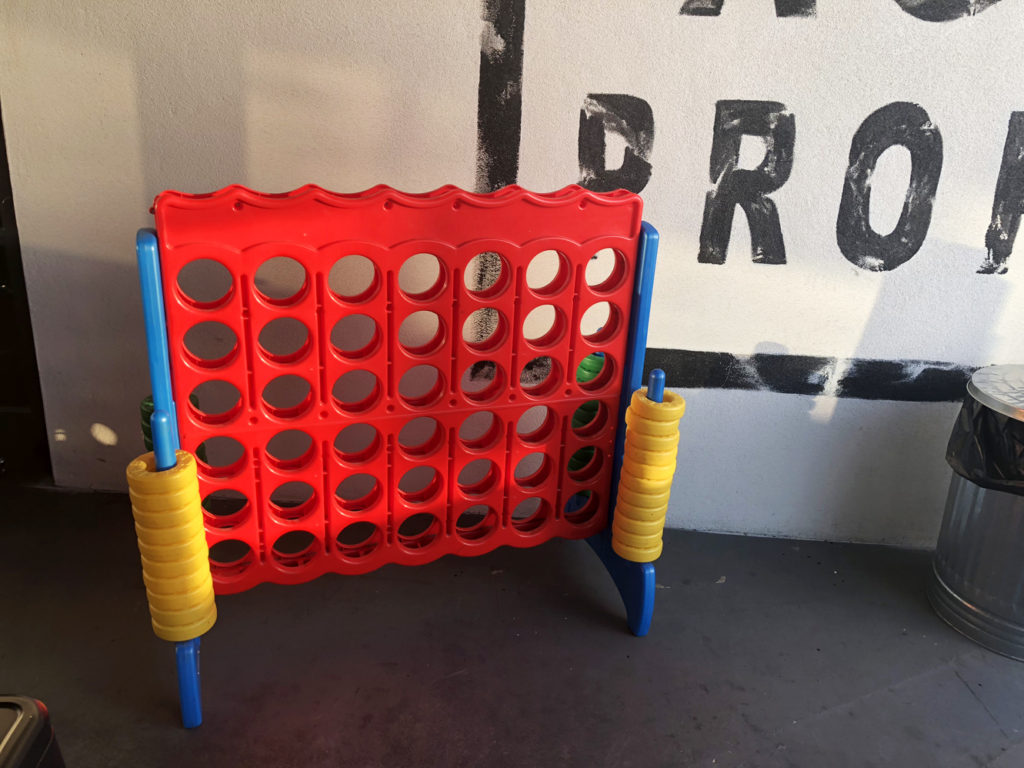 What Are Some Of The Trendiest Foods Of 2018?