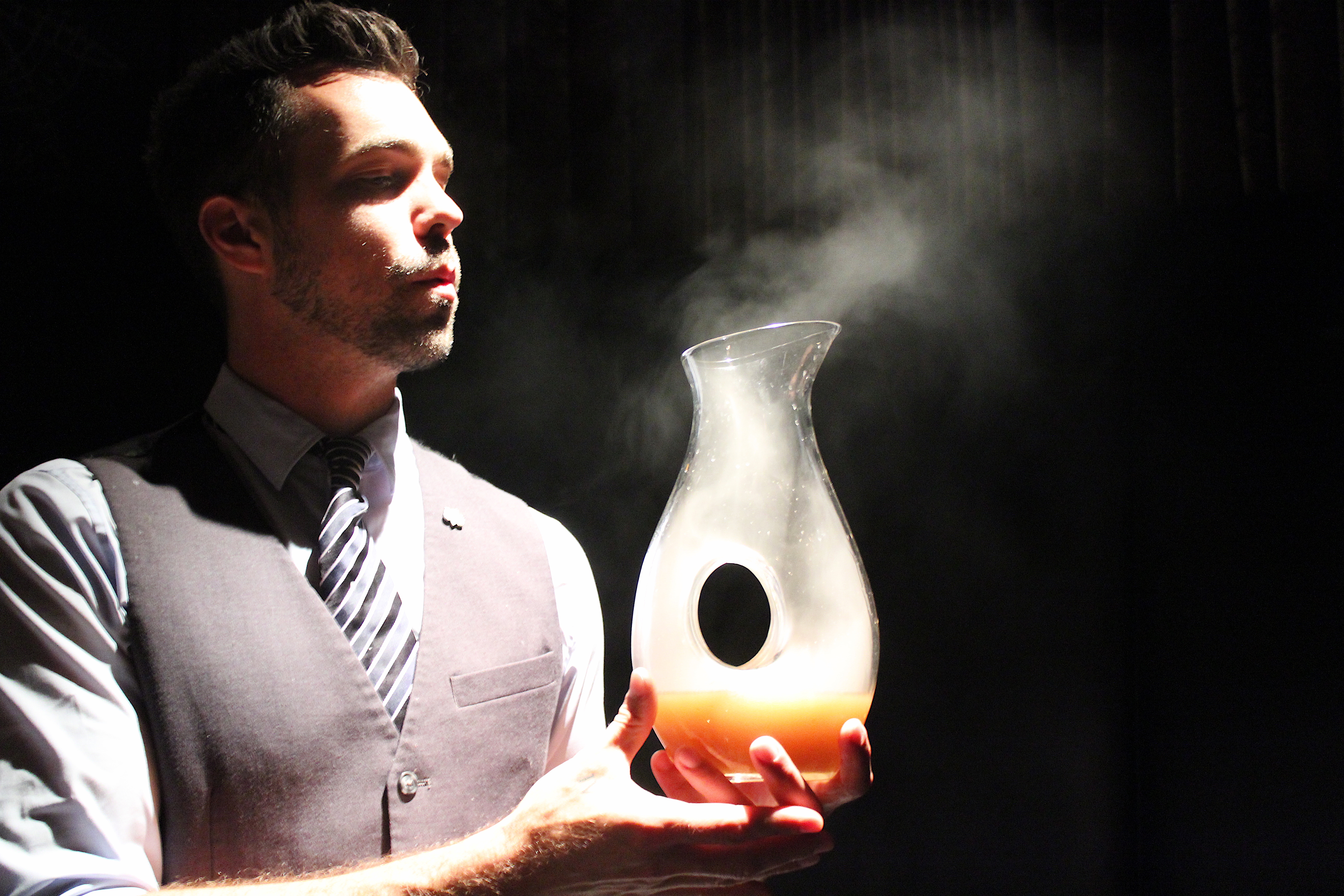 The not-so-mellow month of May is going strong for LA Times Food Bowl in Los Angeles. Patrons of this month long festival are indulging in all things food and beverage, including various markets, tastings, workshops and even documentary screenings, that are taking place in multiple locations all over LA and surrounding areas.

I checked out one of the finer, more avant-garde events, the A Very Bazaar Evening, hosted by The Bazaar by José Andrés, at SLS Hotel, a Luxury Collection Hotel, Beverly Hills. Friend to Girls on Food Meagan and I explored this spot together, which is famous for modern tapas.

Culinary Director José Andrés is a Michelin-Starred and James-Beard Award winning chef, often credited with bringing the small plates (tapas) and trend to the US. If for some reason you’re unfamiliar with him, please do yourself a favor just watch videos of him on Youtube. 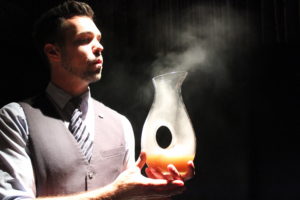 This intimate event was set in their tapas bar, Rojo at The Bazaar and featured many different tasting stations. In addition to modern takes on classic tapas and wine, many stations explored creations through avant-garde techniques, which Chef José Andrés is famous. This event was a feast for the eyes as well as the tastebuds.

“At Bazaar by José Andrés, we want you to see the process”, Head Bartender Billy Yoder told me, as he infused smoke into his A Fire in Jerez cocktail. This cocktail with Whistle Pig Rye, San Emilio Sherry, lemon, rosemary, applewood smoke is right up my alley since I love smokier cocktails. 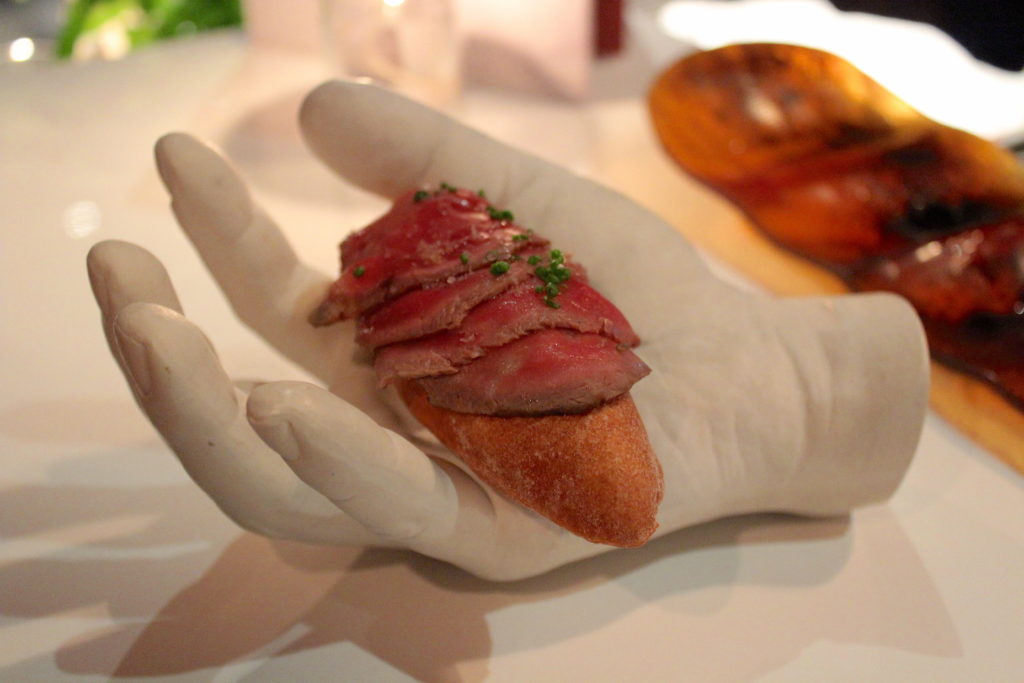 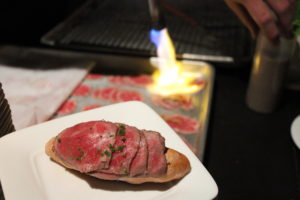 A few of their modern tapas included the Bagel & Lox Cones, Cotton Candy Foie Gras and Olives Ferran Adrià were served, along with restaurant favorites “Philly Cheesesteak”, Not Your Everyday Caprésé, Croquetas de Pollo, Jicama Wrapped Guacamole and Nitro Coconut Floating Island. Cocktails served were also a couple of the most popular including their LN2 Caipirinha. Hosts of each stand seemed to be entertainers in their own right and beamed over explaining each item.

The “Philly Cheesesteak” is a fun one to watch being prepared- especially if you have pyrotechnic tendencies, like me. Thin slices of wagyu beef get torched with a light portion of caramelized onion then top an air-crisp bun stuffed with a foamy but schmere-like cheddar. It’s rich, meaty and cheesy all in one bite. For the presentation, it was served in one of their many unique platters- this one was a sculpture modeled directly after Chef José Andrés. This allowed me to vicariously shake hands with greatness since Chef José Andrés wasn’t in attendance.

One of the most avant-garde items was the Olives Ferran Adrià. First, you’re given a traditional Spanish olive to taste for a texture and flavor reference. Then you try their re-creation of an olive, which is created on the spot, it’s gummy in texture then oozes olive flavor into your mouth. It’s an unexpected savory sensation. At the same stand, their famous Not Your Everyday Caprésé was featured. It’s a similar concept; they create their own fresh mozzarella in front of your very eyes. 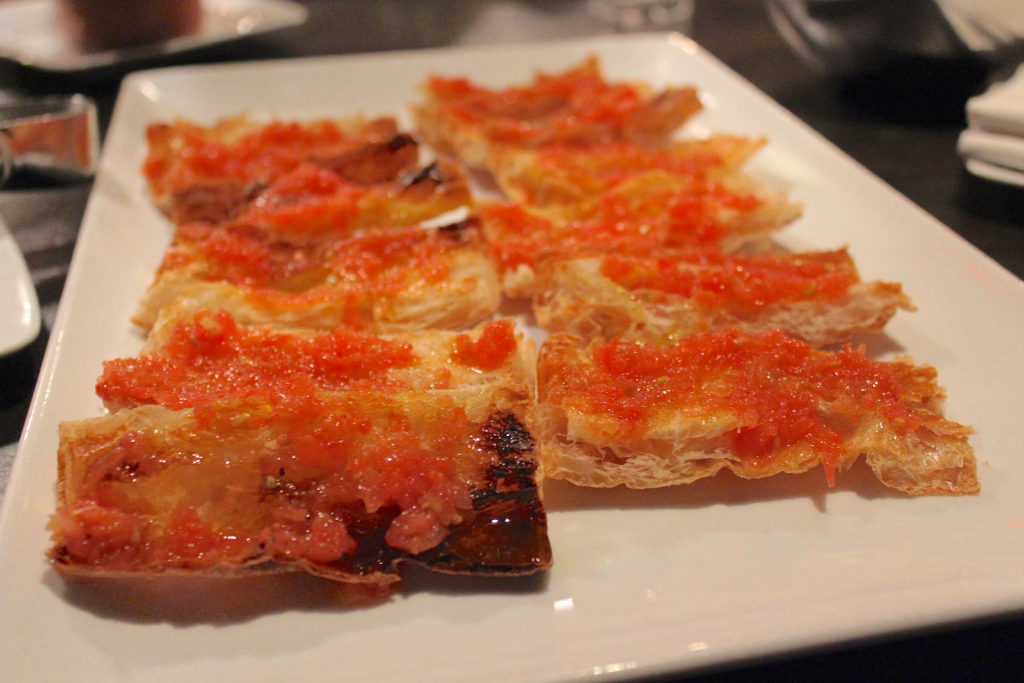 My favorite savory item was the Pa’amb Tomaquet, a tomato-rubbed toast. Readers of the site know I’m not a big bread person because I tend to feel tired after consumption but this toast, was so thin and brittle that it just melts in your mouth right away. That gets topped with a thin layer of a tomato and oil topping. This dish was like an improved, modernist take on the pa’amb tomaquet I was familiar with when I worked at a tapas pop-up. 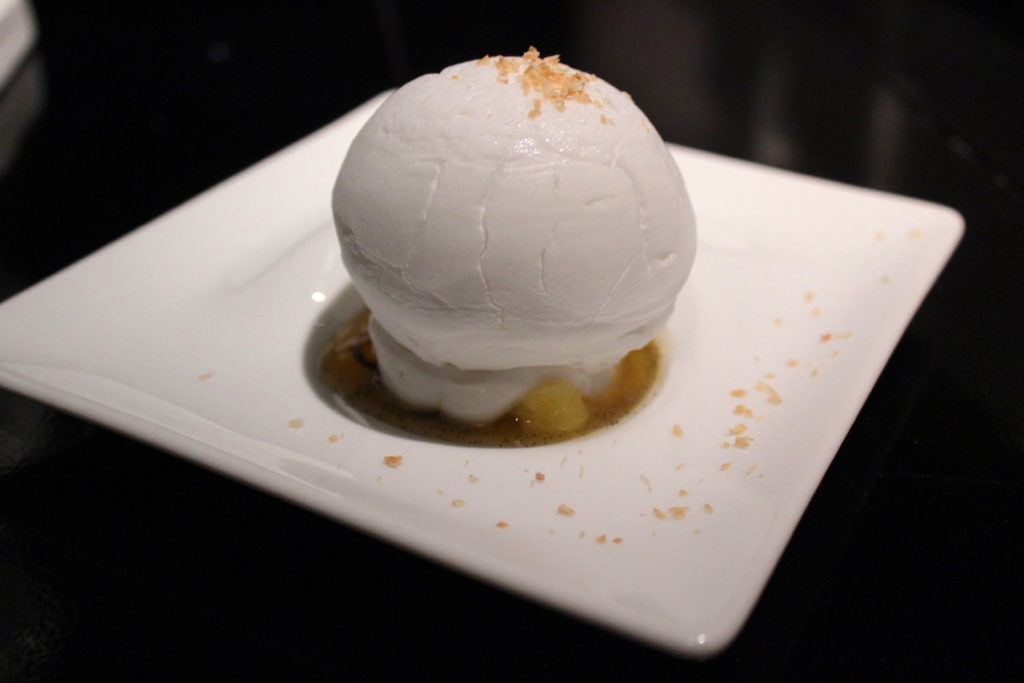 My favorite sweet treat of the night (and this may be one of my favorite desserts ever now) was the Nitro Coconut Floating Island, which is a little tricky to explain because it’s so complex, but it’s almost like a meringue meets an ice box cake. It’s stiff on the outside but crumbles and is frothy but with a creme de coconut-level richness on the inside. It’s an anomaly, a delicious anomaly. The sauces are vanilla bean, espresso, and passion fruit. All flavors, temperatures, and textures play beautifully together here. 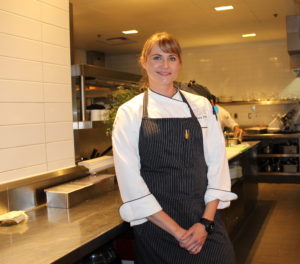 Chef de Cuisine Holly Jivin (who’s worked with The Bazaar by José Andrés since the open in 2008) was there and excited to host guests for the LA Food Bowl tasting. I got to sit down with her and pick her brain about career paths she thinks aspiring female chefs should look into and I was a little surprised by her response.

“I boycott culinary school,” she told me. “I’m still paying off student loans. I have cooks that have gone to culinary school but have zero actual experience in the kitchen.”

“My goal in life is to be a teacher. Teaching them [cooks] is the only way to keep it [education in culinary arts] alive and not shut the door on them. Four cooks have expressed interest in culinary school, so I started internships for them. They’re never going to get that experience unless they get their foot in the door.” 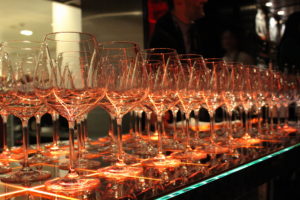 Since one of Chef José Andrés’ missions is to promote awareness of food waste and hunger, Chef de Cuisine Holly said “I teach my cooks that we need to utilize everything before it goes bad. It’s easy to throw food away, but you can always make a family meal out it. That’s one way we try to avoid food waste. José himself has taught me not to waste food and how important it is to use as much of the product as possible. You can change the world through the power of food.”

I could taste the precision and passion that went into every bite I ate and every sip I drank. This event was certainly one of the most unique tastings I’ve ever been to. I cannot wait to come back for more!

Special thanks to LA Times Food Bowl, The Daily Meal and The Bazaar by José Andrés, at SLS Hotel, a Luxury Collection Hotel, Beverly Hills for setting this up!

Join Us at Taste of Tribeca This Weekend!